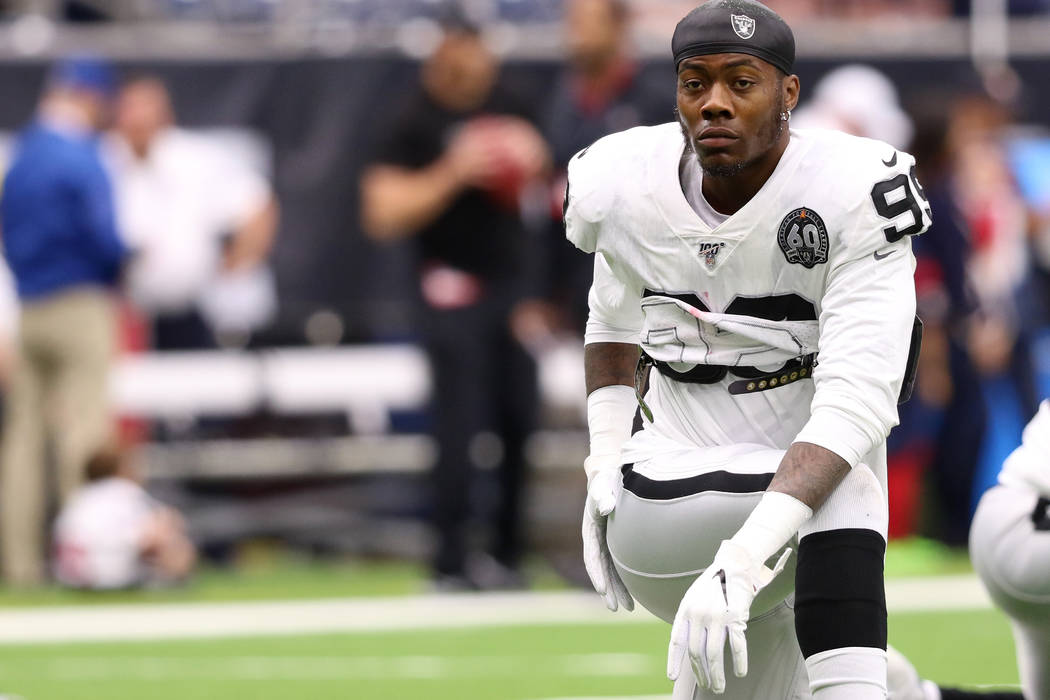 ALAMEDA, Calif. — The Raiders have lost defensive end Arden Key for the rest of the season with a broken foot.

A 2018 third-round pick out of LSU, Key was expected to take a significant step forward in his development in his second season. That was beginning to come to fruition, as Key had recorded a sack in back-to-back games against the Texans and Lions.

But now Key’s 2019 is prematurely done and the Raiders will have to fill in for him.

“It’s hard to lose (him), but the next guy’s got to step up,” defensive coordinator Paul Guenther said. “We’ll work some different guys in there. It may not be just one guy. It might be two or three taking his snaps.”

Key has recorded 3.0 sacks in 23 career games. He also has six career tackles for loss and 15 quarterback hits.

At least for now, the Raiders are thin at defensive end — particularly because it’s a short week. Josh Mauro continues to miss practice with a groin injury. He didn’t play in the Week 9 win over Detroit, which resulted in rookie Maxx Crosby playing 93 percent of the Raiders’ defensive snaps.

No. 4 overall pick Clelin Ferrell may see an uptick in playing time with Key done for the season. He’s played 62 percent, 63 percent and 65 percent of snaps in the Raiders’ last three games.

Rookie cornerback Isaiah Johnson has been waiting for this day since early August.

Johnson suited up for the Raiders’ first preseason game against the Rams on Aug. 10. But he was in for just four plays — three on defense, one on special teams — before suffering a facial injury that landed him on injured reserve to start the season.

Now, Johnson has been officially activated from IR to the 53-man roster and is expected to make his debut against the Chargers on Thursday Night Football.

“He’s obviously been practicing for a few weeks, so hopefully we can get him in there, get him a couple snaps and get him rolling,” Guenther said.

Johnson first returned to the practice field on Oct. 14 and has been working to improve his game ever since. He said he feels comfortable within the defense now, but knows he’ll have to get used to game speed against wide receivers.

As for his role on Thursday, Johnson said he’s unsure if he’ll be used on defense. But he expects to play heavy special teams snaps.

“It’s something I’ve been good at for a while,” Johnson said. “But as far as defense, just whenever my name is called — somebody goes down, just be ready to go.”

The Raiders had positive news on the injury front Tuesday. Center Rodney Hudson and right tackle Trent Brown were on the field for the club’s light Tuesday practice in preparation for Thursday Night Football.

Hudson (ankle) and Brown (knee) were both listed as limited.

Cornerback Daryl Worley (ankle) and linebacker Nicholas Morrow (foot) were also back on the field. They were both listed as limited.