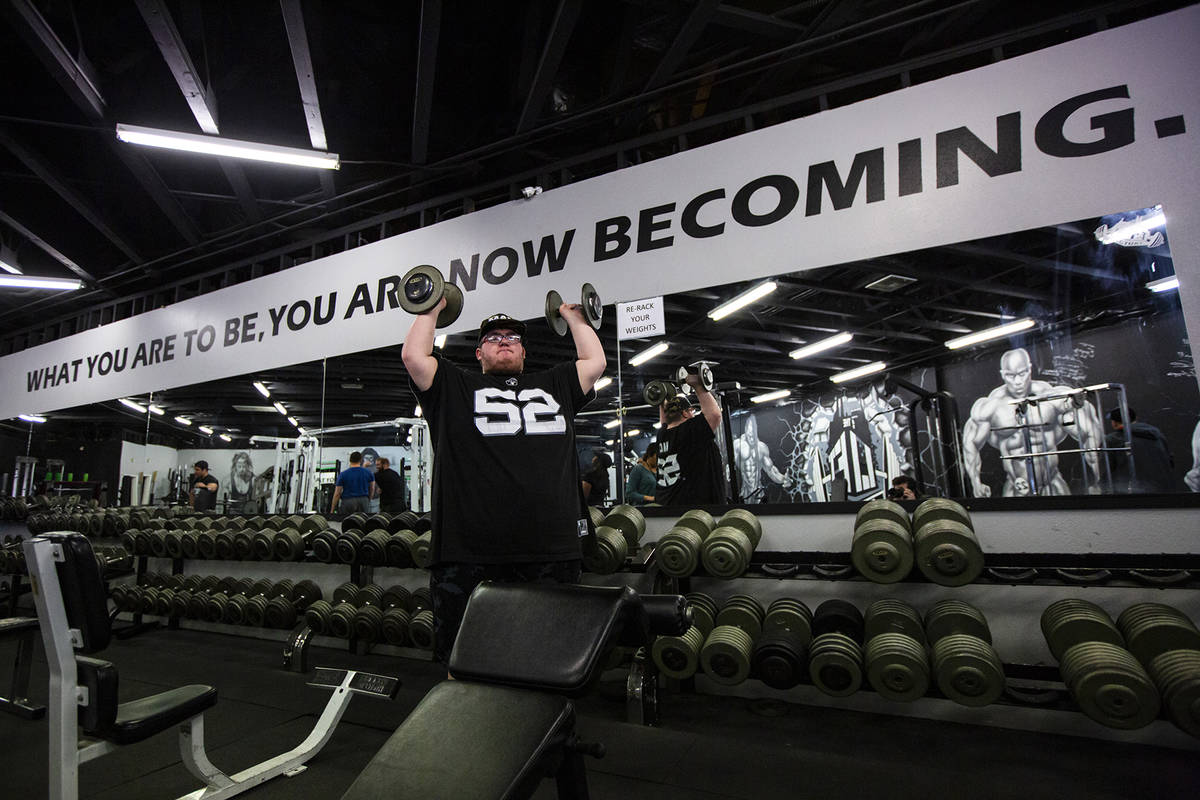 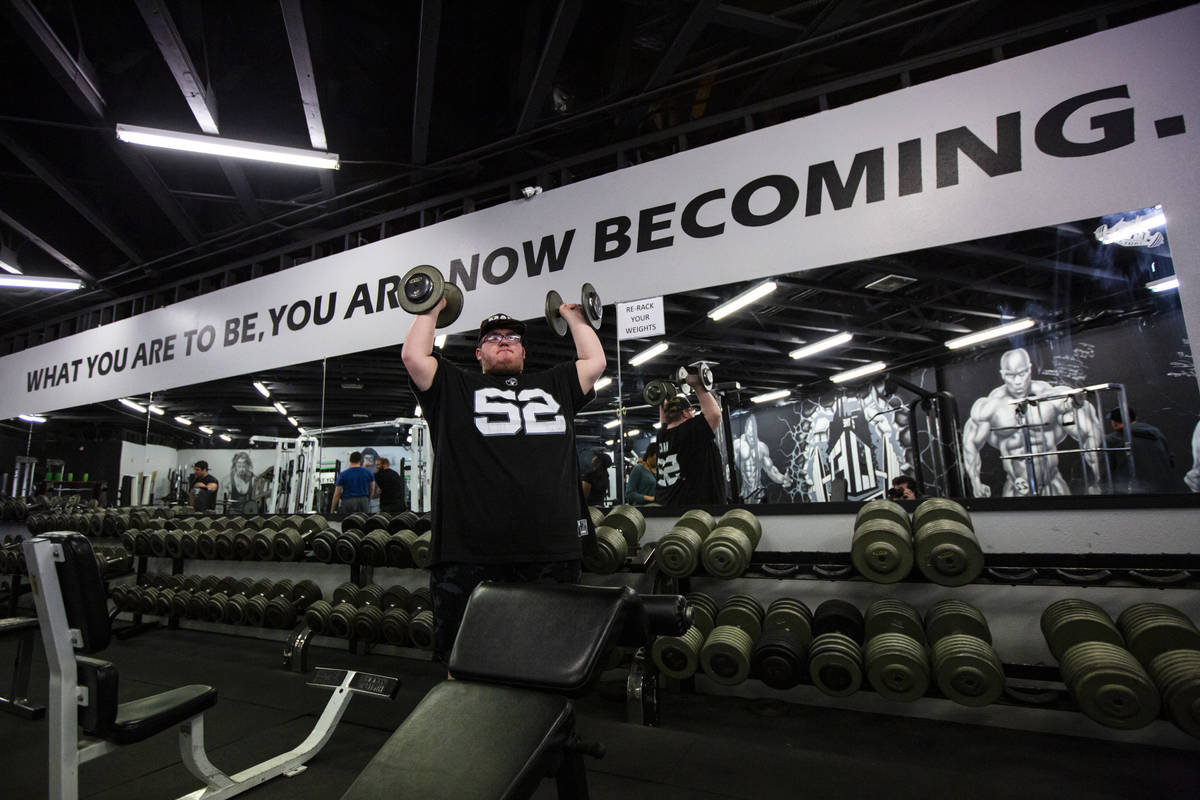 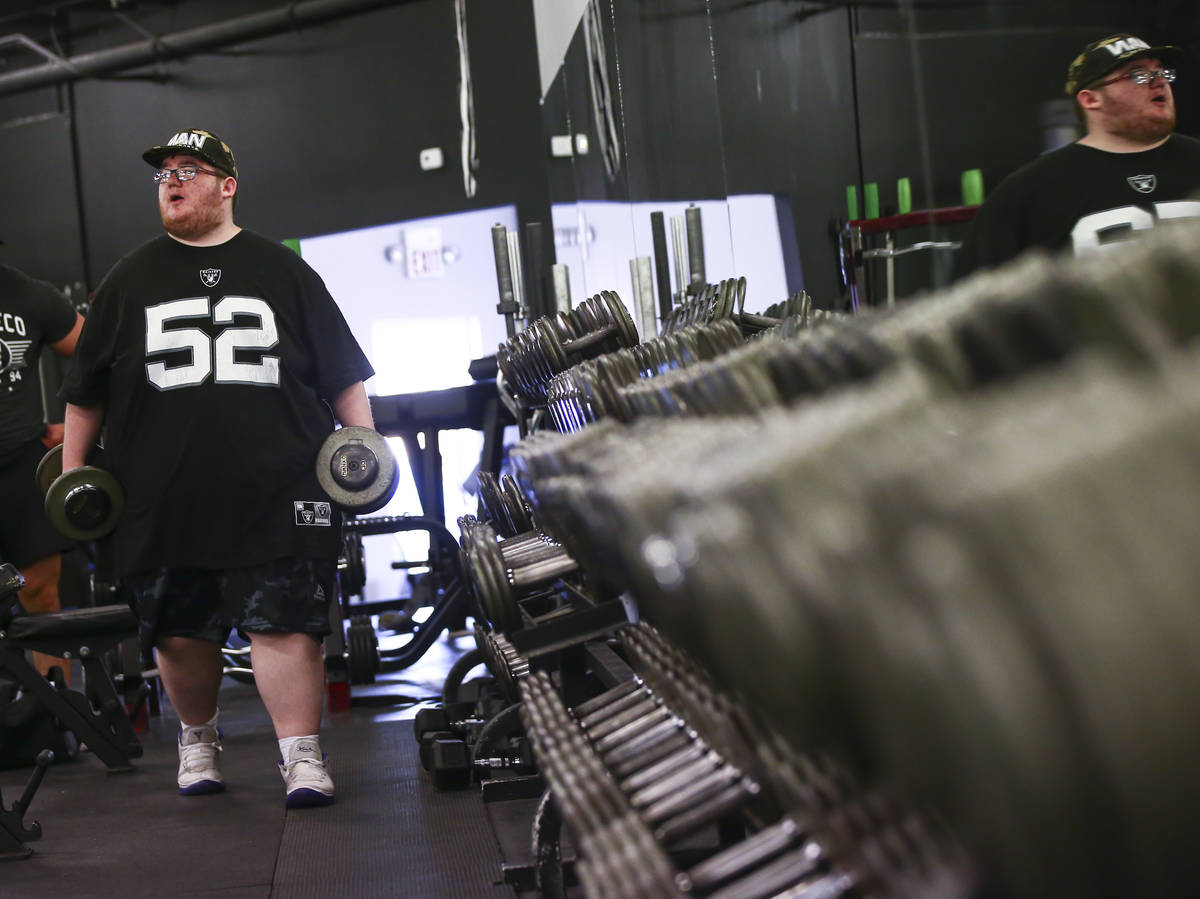 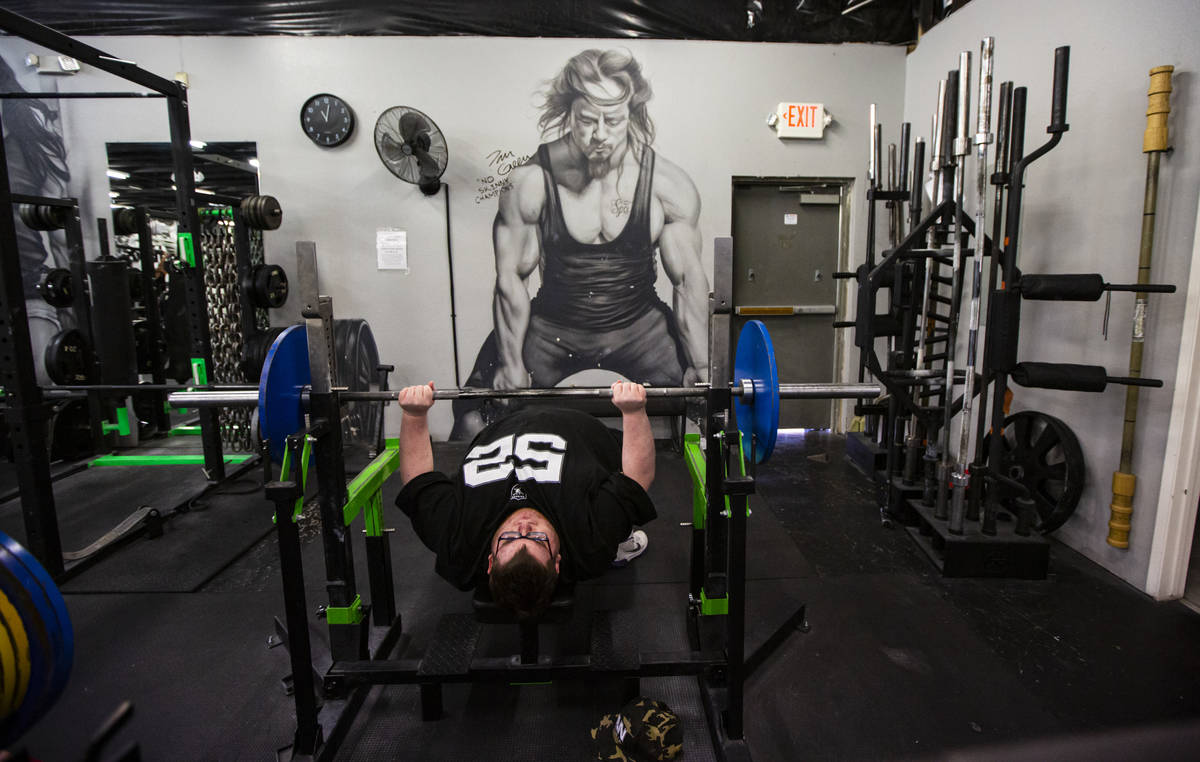 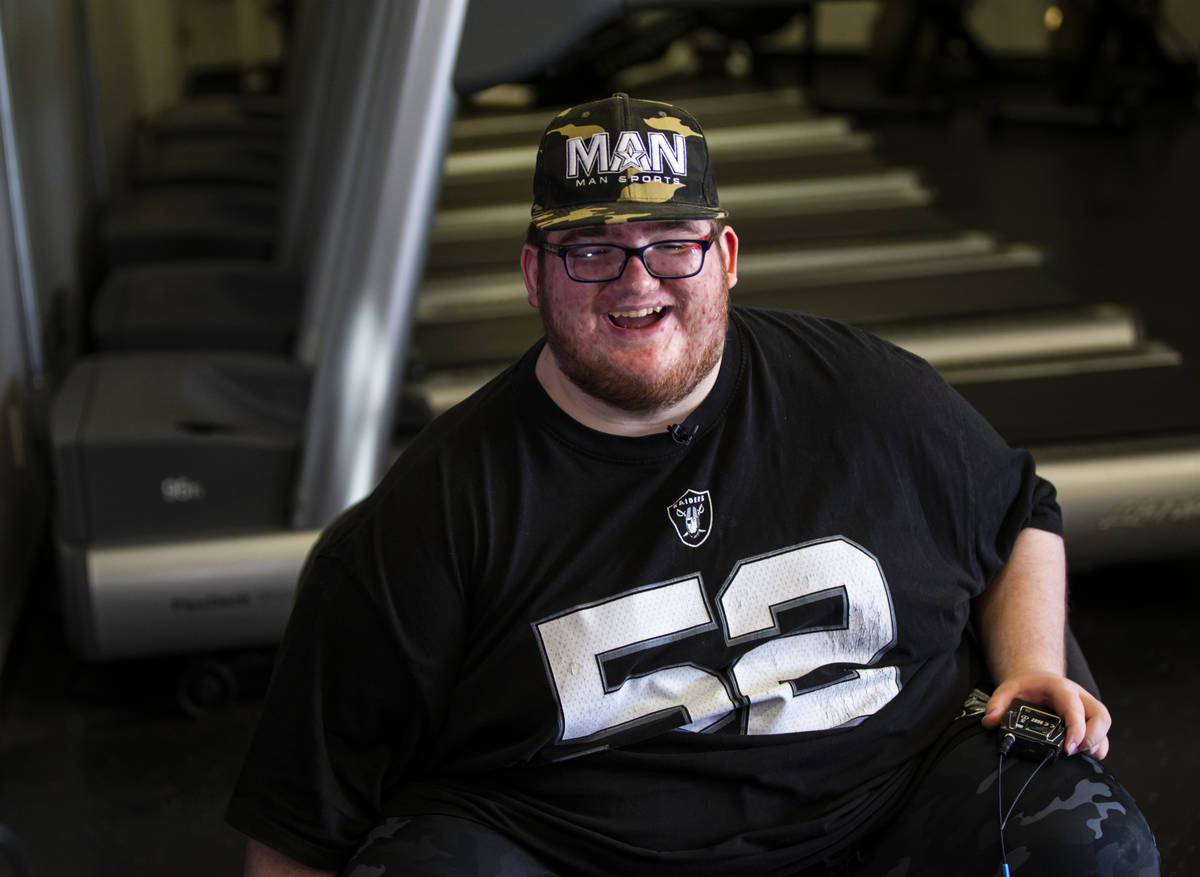 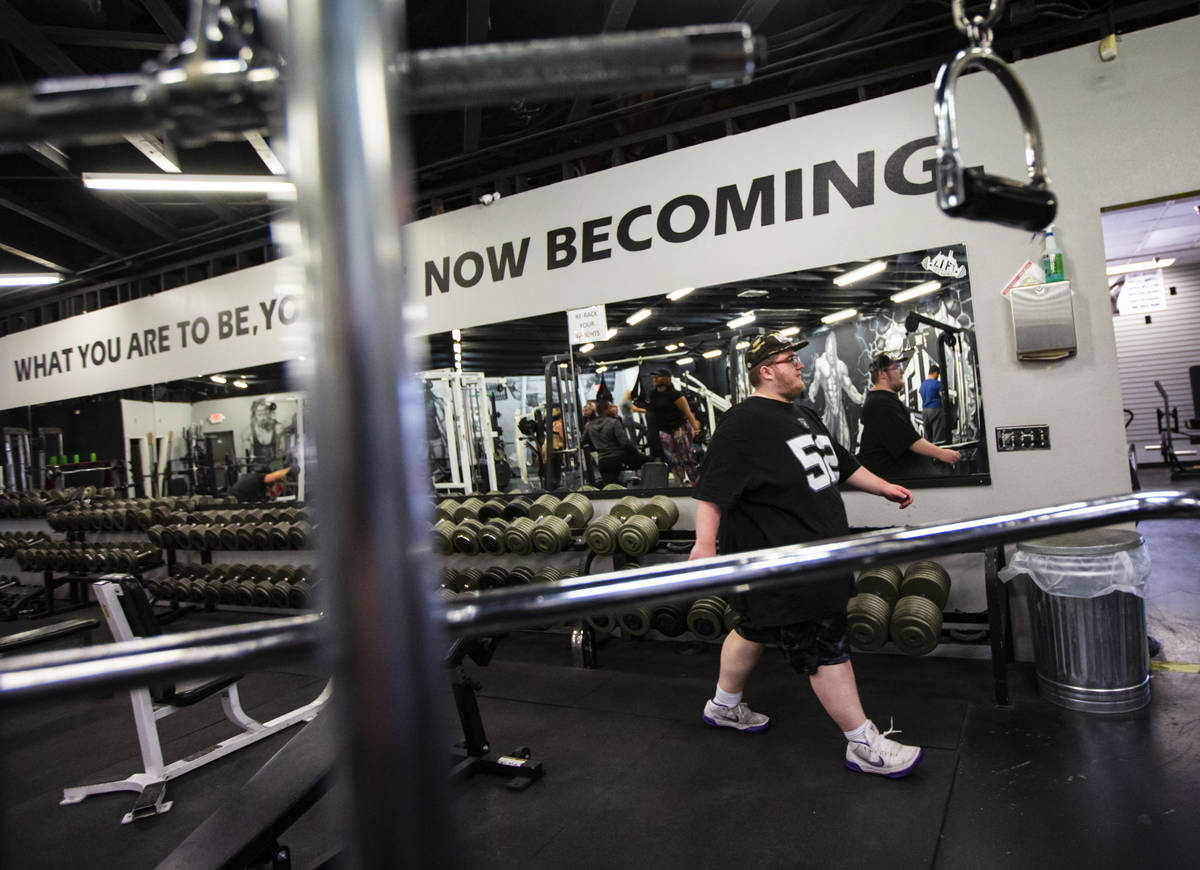 Paul Minor after a workout at The Lift Factory in Las Vegas on Thursday, Feb. 27, 2020. (Chase Stevens/Las Vegas Review-Journal) @csstevensphoto 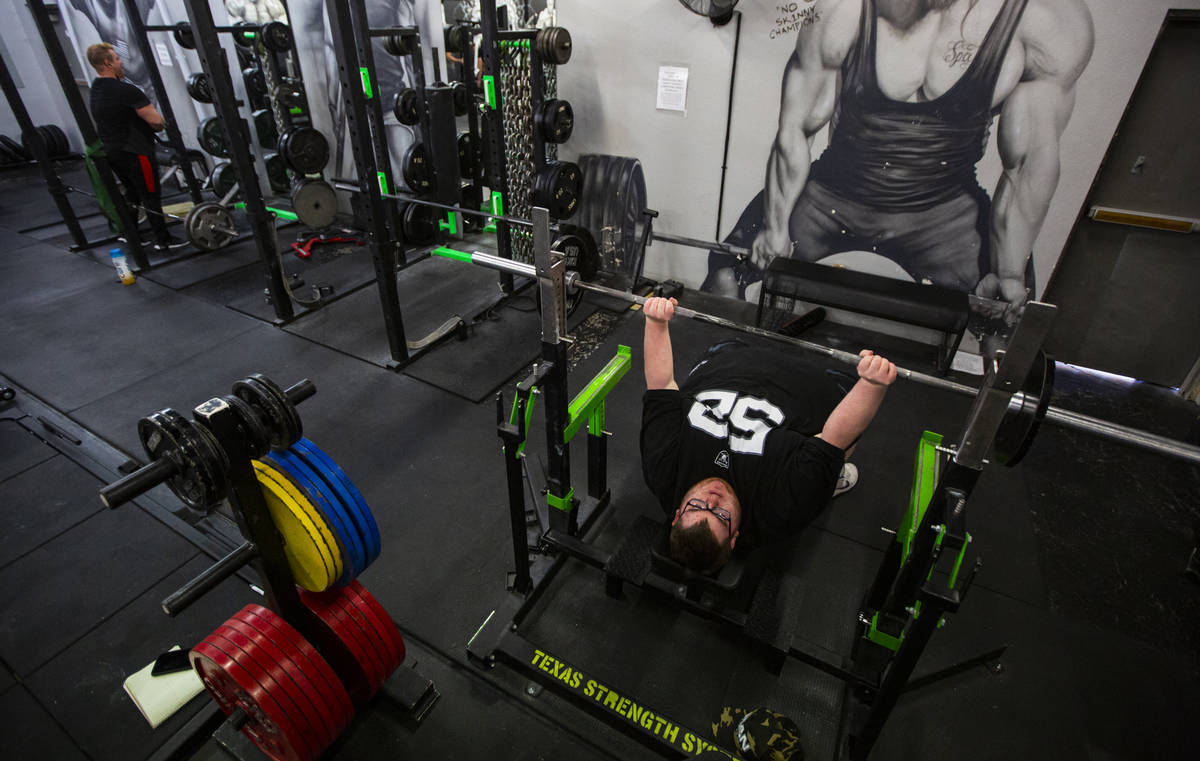 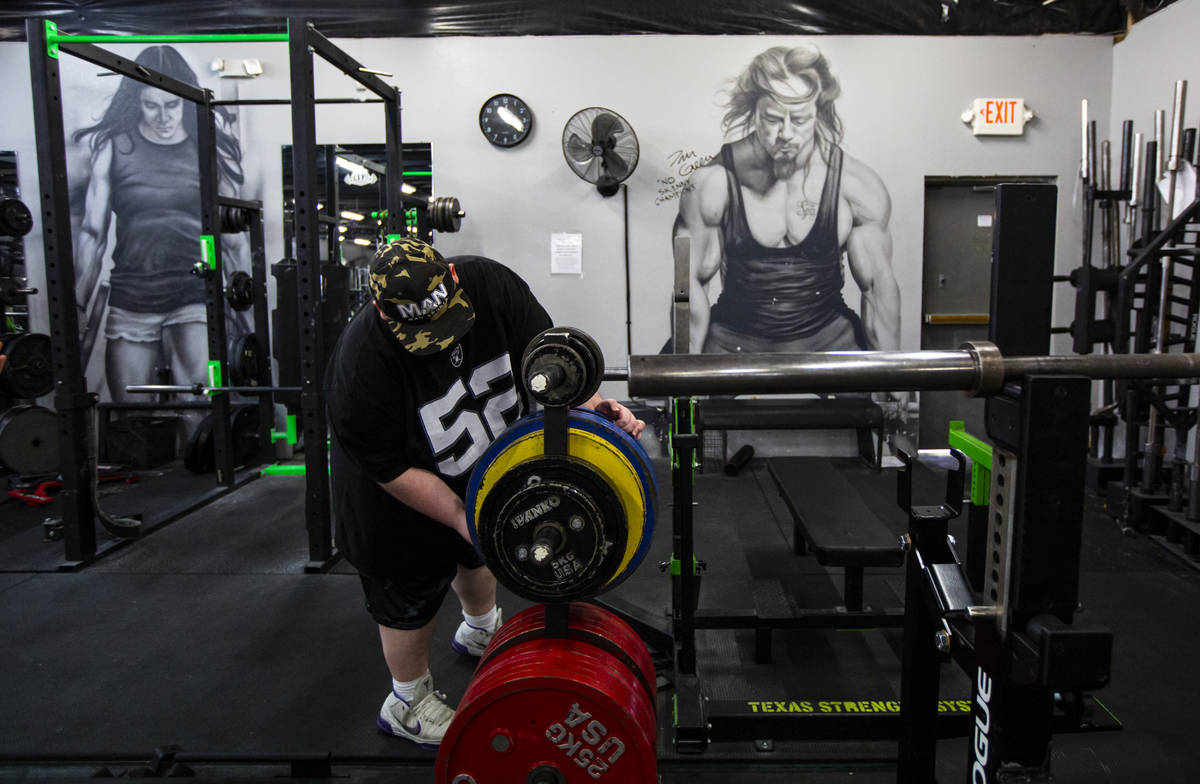 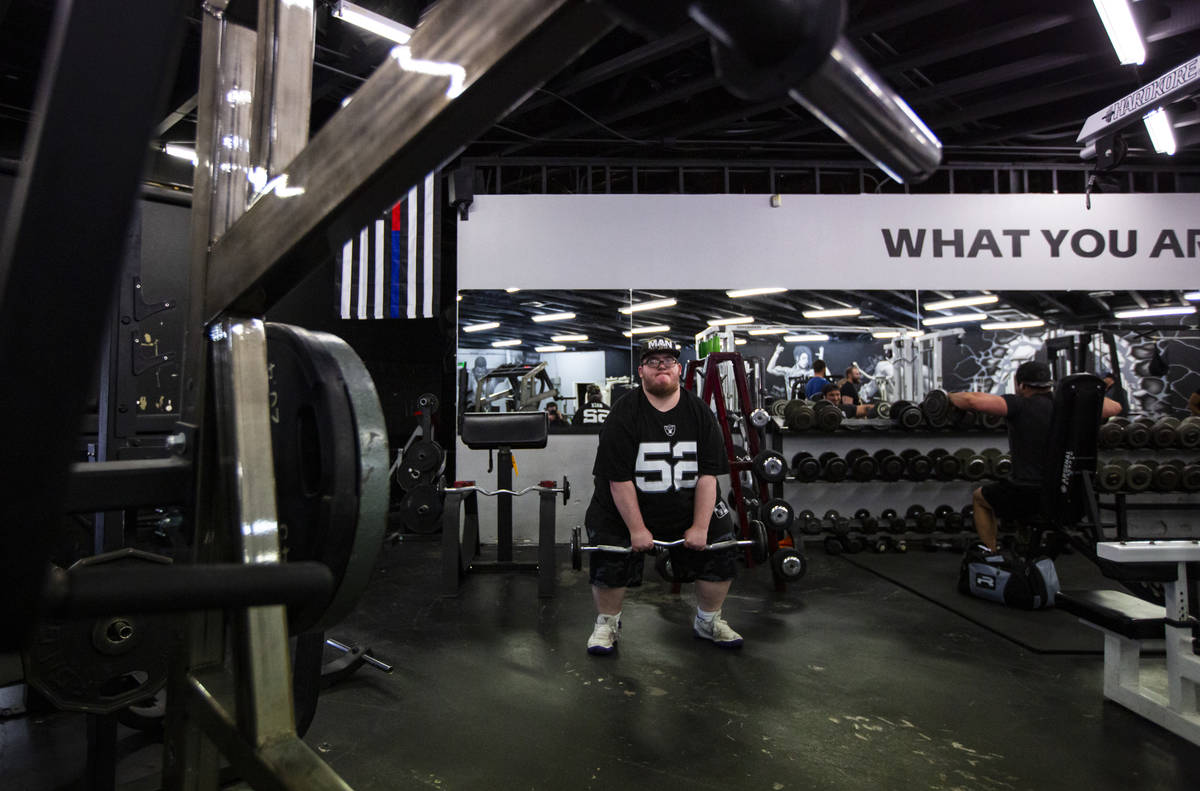 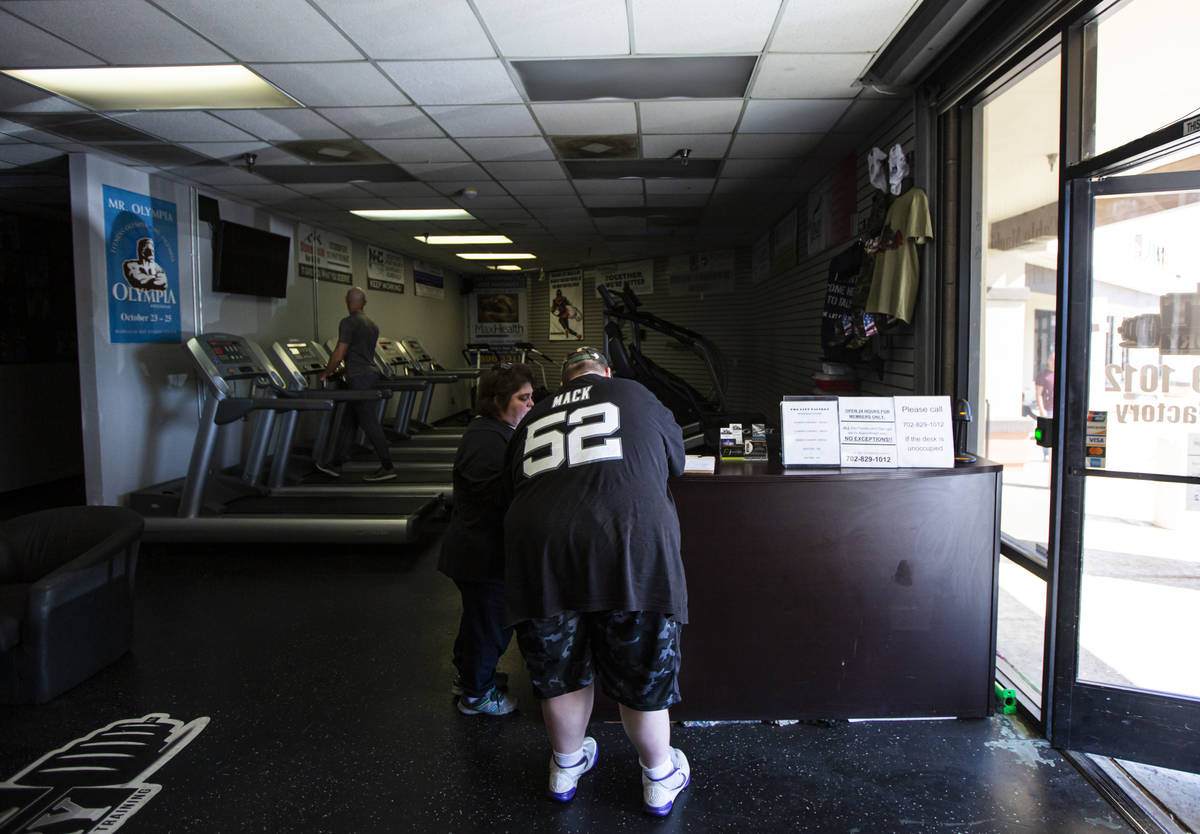 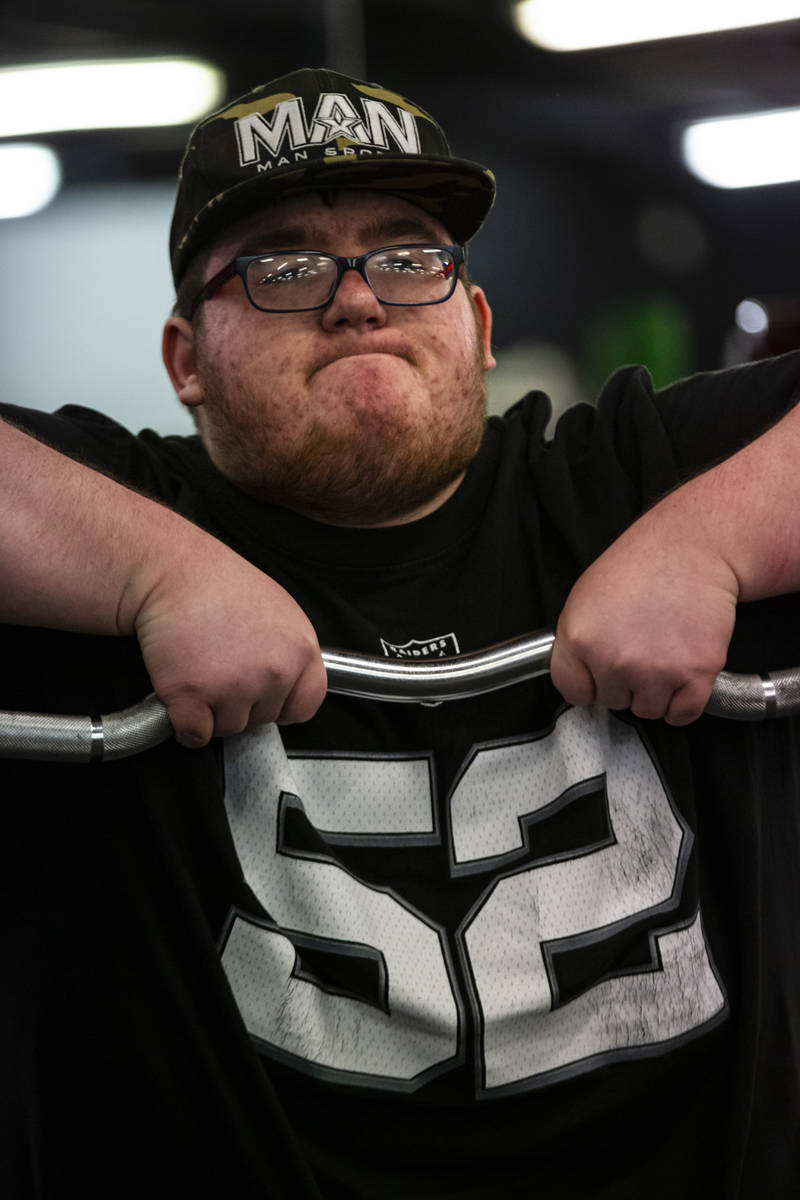 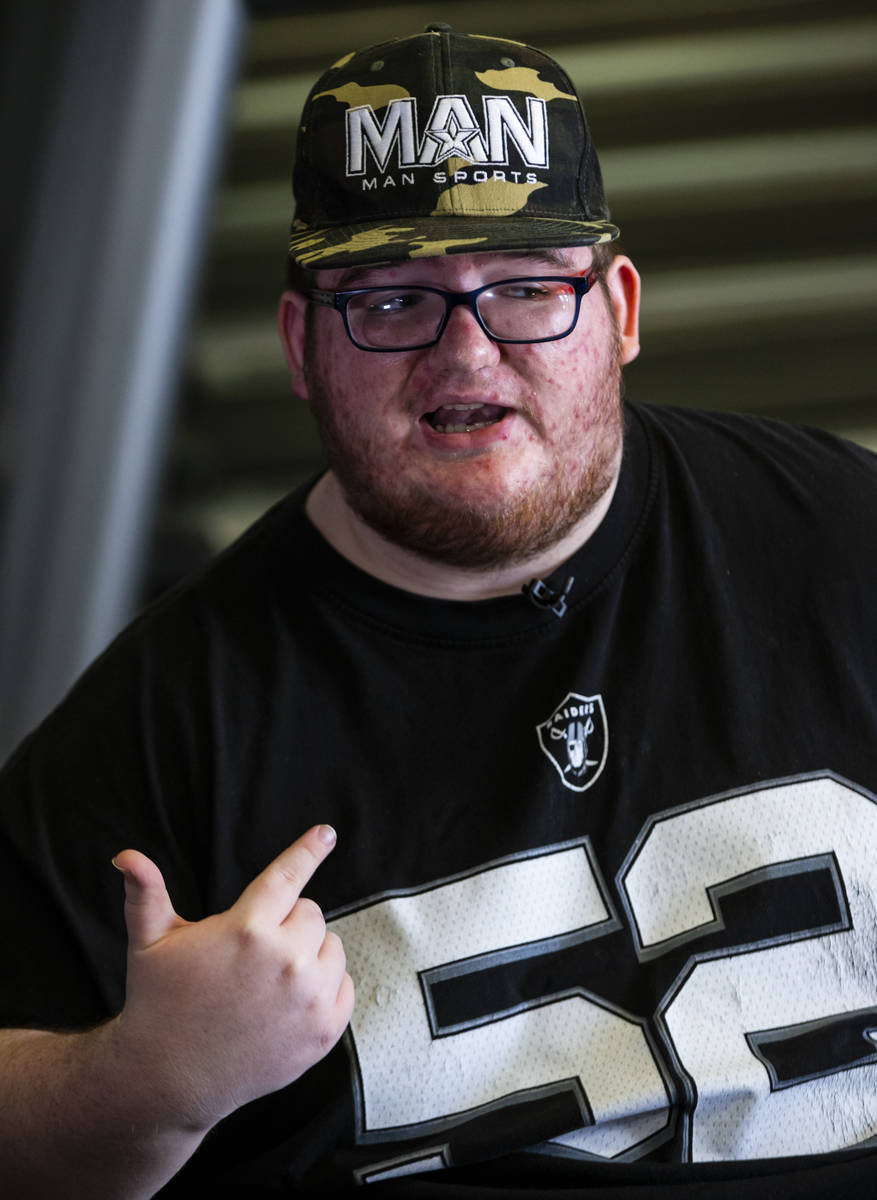 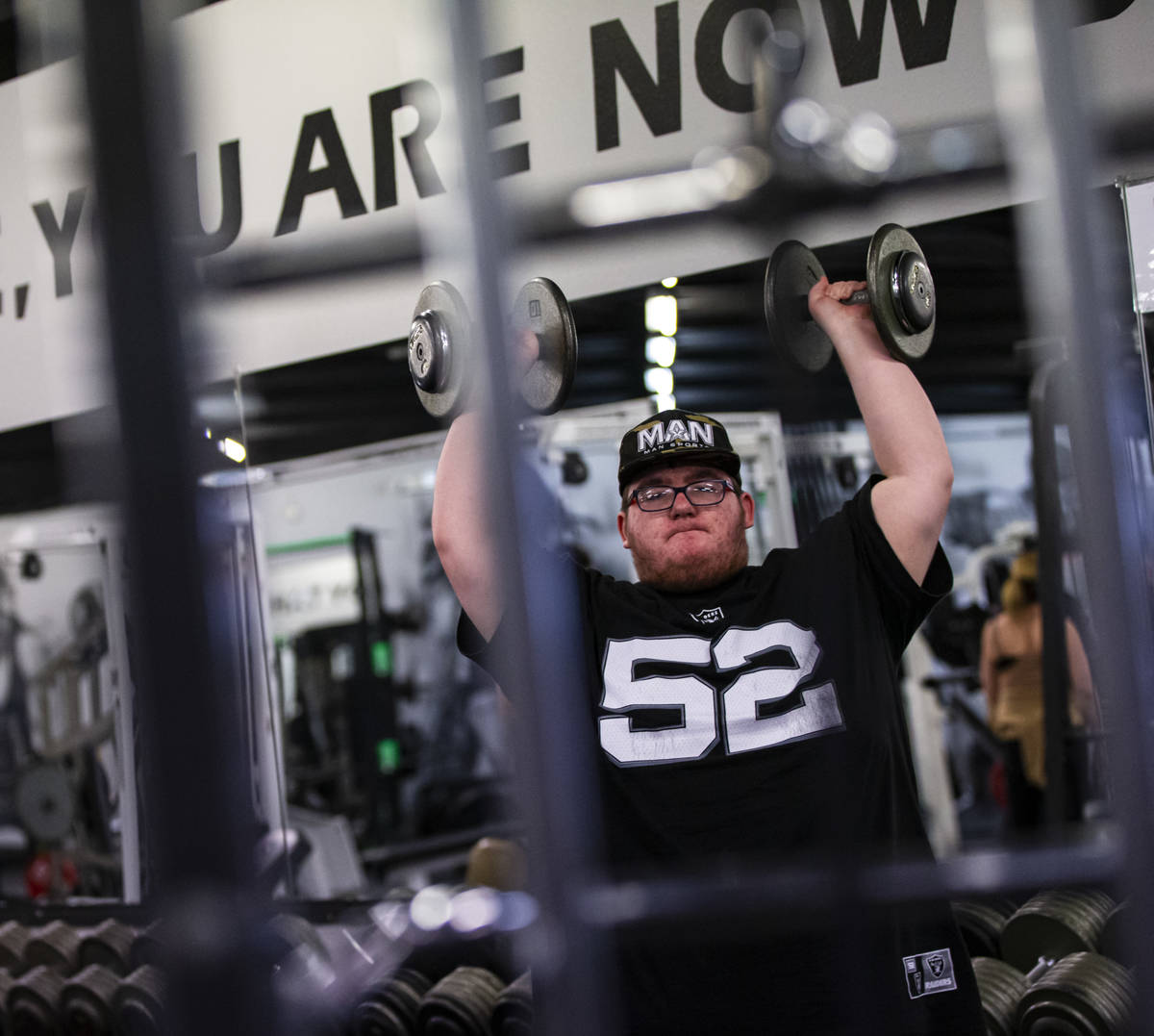 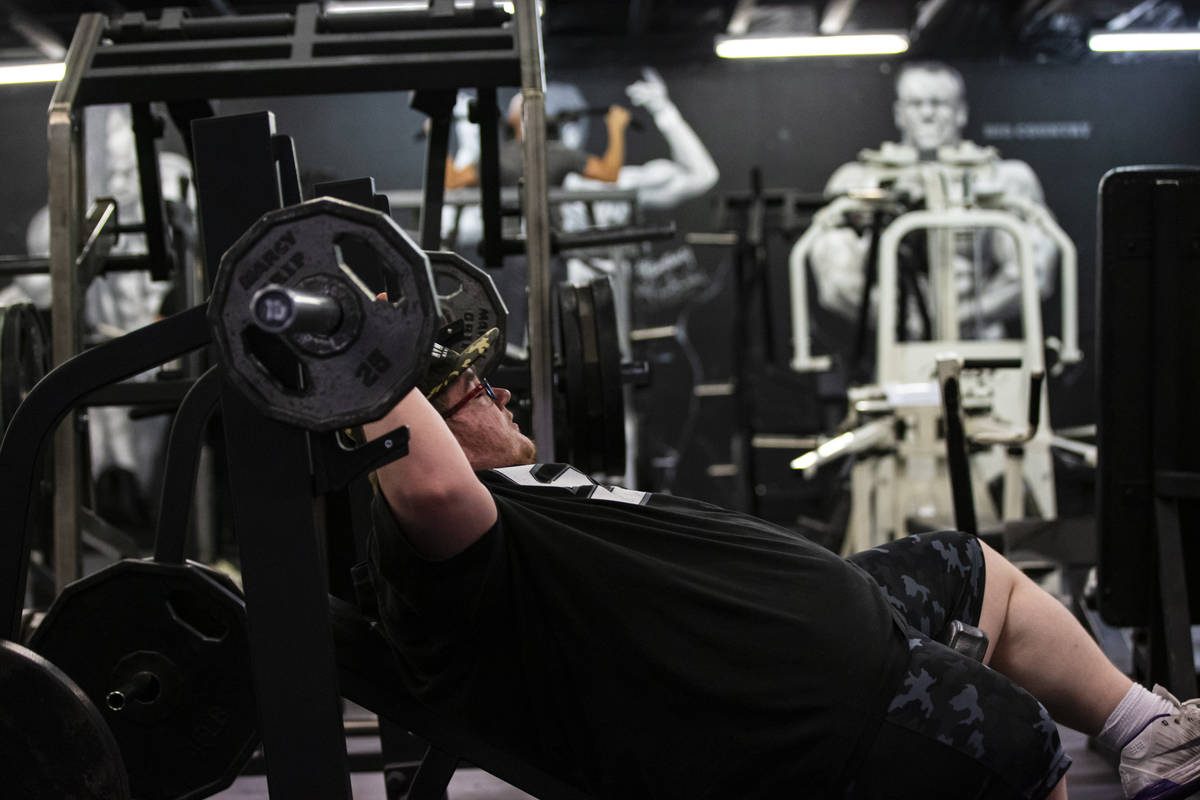 Paul Minor was home alone in February of last year. He knew what had to be done.

The bathroom scale was specially ordered. A standard one just wouldn’t do.

Instead of a numerical reading of weight, a voice would announce the result. Minor cautiously stepped forward and life paused for an excruciating second.

“I couldn’t believe that I had let myself get this out of control,” he said. “I thought, ‘This is horrible.’ I didn’t know what to do. I had made terrible decisions.”

He knew what such vocalized reality meant. His life was at stake.

And, in the most inspirational of ways, the Las Vegas Raiders could play a part in saving it.

Memories of that February day are still clear, the virtual voice as frightening as ever. Minor recounts the number now — 451 — while wearing a jersey of his favorite NFL player. It is black with the white number 52.

Khalil Mack is the reason he fell in love with football, and the Raiders are the team his family has passionately followed for decades. Minor cried when Mack was dealt to the Bears in 2018 but has never wavered in his devotion to the franchise that will now make Allegiant Stadium home.

He is 19 and moved to Las Vegas with his mother following graduation from Viewmont High in Bountiful, Utah, where he played football as a freshman. But the challenges of being a 380-pound defensive lineman led to several health issues. He didn’t play again.

The Raiders, then, became his most intimate connection to the game. Not in the sense of a personal relationship with the organization, but instead as a loyal fan. There are few better examples in sports than the Raiders when it comes to a bond those who follow them share. Family is forever, but the relationship might last even longer for those who embrace all that is silver and black.

Minor lives and breathes such a commitment (to excellence).

“To be able to see them here in Las Vegas gets him extremely motivated,” said Jaunice Minor, Paul’s mother. “He wants to go to a game if possible. The Raiders have given him motivation to change his life. He wants to keep going because of them.”

To help save his life?

Support has never been a problem.

Minor has more than 46,000 followers on Twitter, from Grammy-nominated producers and bands to motivational speakers to UFC champions to professional wrestlers to massive social media influencers. To all those Raiders fans.

They are his inspiration and he theirs.

Another to encourage and guide has been Jonathan Holland, a seventh-round draft pick of the Raiders in 2007. The wide receiver spent three seasons in Oakland — his only ones as an NFL player — and is now a personal trainer living in Houston.

He came to know Minor through a Raiders fan podcast and soon understood through long talks with both Paul and his mother that, deep below the surface of weight issues, were potentially more serious ones. That the outside was being controlled by the inside.

Holland sends Minor meal plans and workout routines, and the two converse often about progress and failure and how to manage both.

“We talked not only about his Paul’s physical health, but how it has affected his mental health,” Holland said. “The first step I always approach in such a situation is the person’s state of mind. You have to dig into those different layers before you can really start on the physical side of things. You need to first know why and how things got to this point. It all goes hand in hand. Paul allowed me to do that and really opened up. We went from there.

“Paul is a stand-up guy. His story is very uplifting. He has a great outlook right now. I believe in goals. But we sometimes forget that each step is critical. We can’t skip any. You go steps 1-2-3 and so forth. If you lose 2-3 pounds in a week, great. Celebrate it. But remind yourself there are more steps to take. Keep pushing forward. I believe Paul will. I believe he has the personality and mindset to get this done.

Achieving goals has never been a problem.

Minor had a 1.6 grade-point average as a junior in high school and graduated the following year with a 3.0. He went from six credits to 24 in a matter of months.

He also stepped off that talking scale and understood well the potential risks of remaining so overweight. Heart attack. Diabetes. Death.

So he set another goal: to one day hear that voice respond with a different number: 200

The distance from such a cavernous point to what many might believe an unreachable summit is crammed with varying challenges. One of the more common ones is depression, a disorder battled by millions with seemingly no one end in sight. You just feel numb all the time.

“Some days, the bad days, the darkest days, I didn’t think I would make it through,” Minor said. “I didn’t want to wake up the next morning. My depression and anxiety would get the best of me. So there are days I go out and try my best and then there are horrible days.

“I think the real goal all along has been to be healthy. Some goals might be larger than life, but I will work 10 times harder than someone else to achieve them. The Raiders are about to begin a new chapter in Las Vegas. It’s a new chapter for me also when I lose all the weight.”

His is a familiar example of how things can go very wrong very fast.

His mother was a single parent working a full-time job while attending school, a schedule that often didn’t allow for home-cooked meals while raising Paul. It was easier to stop for fast food. There was a whole lot of fast food.

He has battled weight issues since age 7 and yet never really committed to a strict regimen of diet and exercise until the last year. Never really pledged to become stronger in mind, body and spirit until now.

He reached as low as 371 pounds in December, had the inevitable setback that comes with such a journey, went back up to 410 and is now at 388.

On this Mother’s Day and all others, he shares such travels with Jaunice, who has joined her son in the battle against weight and has already lost 50 pounds.

“I wish I could go back and fix a lot of things, but I can’t, so we are fixing them now together,” she said. “I got extremely worried about his depression. I didn’t want to wake up one morning without him. I thought that was possible.

“Raider fans have been there through all of this. We have made some very good friends in them. They’re always there in your corner.”

In this time of the coronavirus and gyms being closed, Minor has been a constant video presence on Twitter while finding different ways at home to continue his quest.

All while wearing Raiders gear.

He will usually accompany each workout with positive words or songs, encouraging others to also not give up on all those goals and dreams.

“One thing all of this has taught me is that when you get knocked down nine times, get up and don’t go down a 10th,” Minor said. “It doesn’t matter how deep the depression or hole you fall into. It’s never too late until you’re dead. I regret a lot of the poor lifestyle choices I made, but I made it through my darkest days. I can make it through today. I want to be 200 pounds. I won’t stop getting up when knocked down.

“I can’t tell you how excited I am about the Raiders being here. I want to be there when we’re winning playoff games and championships in Las Vegas. I will never be 451 pounds again. This is my team, man. I want to be around to see all of it.