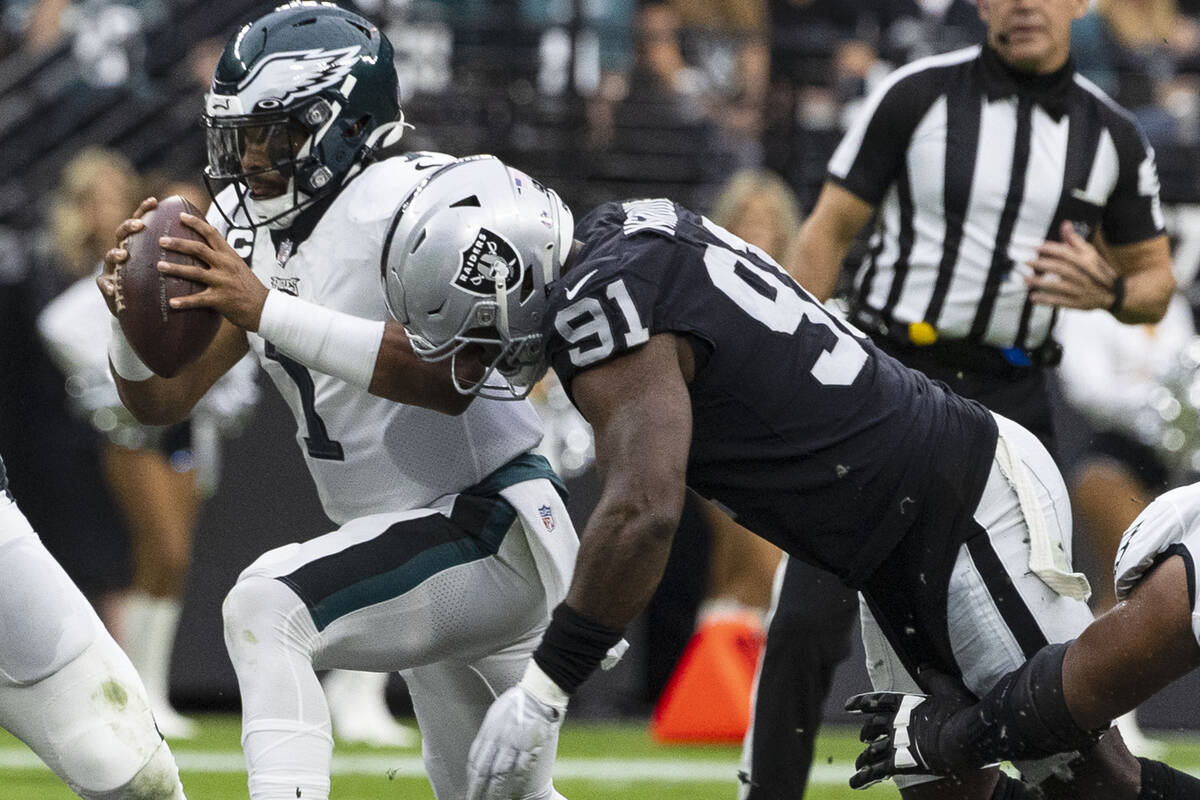 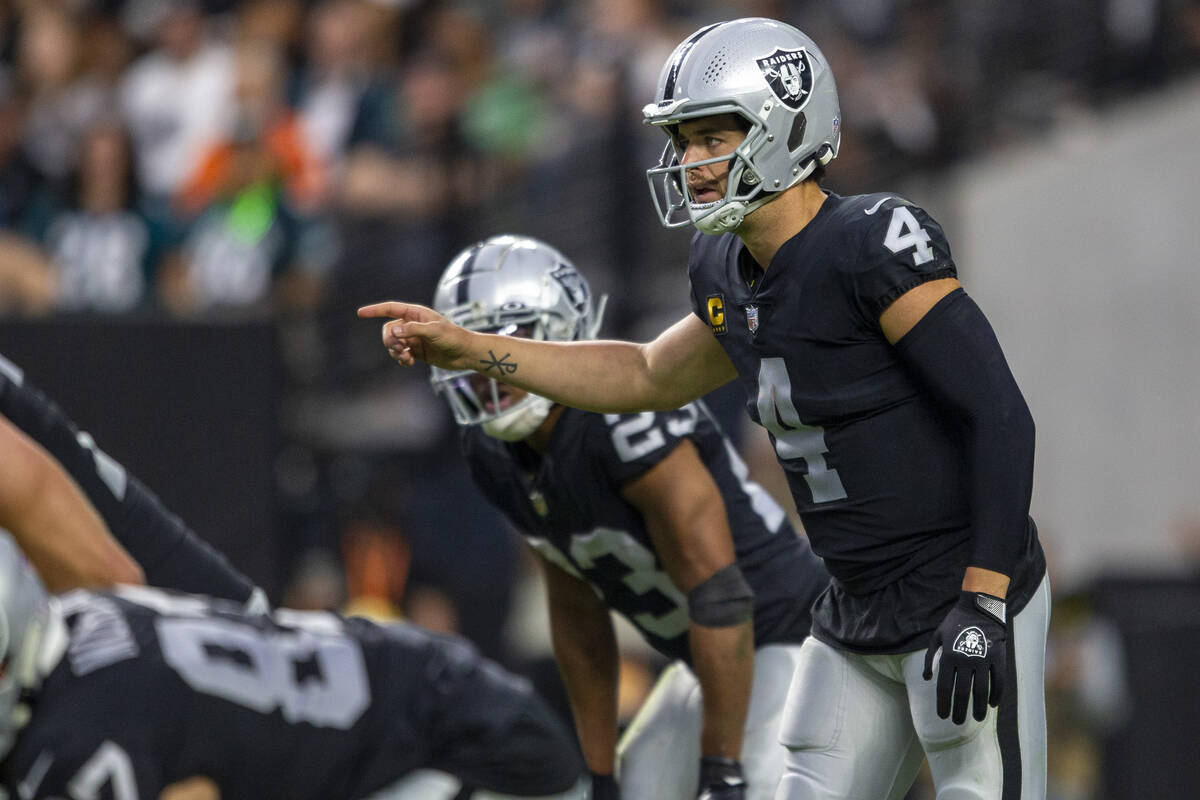 Raiders quarterback Derek Carr (4) audibles at the line of scrimmage during the third quarter of an NFL football game against the Philadelphia Eagles on Sunday, Oct. 24, 2021, at Allegiant Stadium in Las Vegas. (Heidi Fang/Las Vegas Review-Journal) @HeidiFang 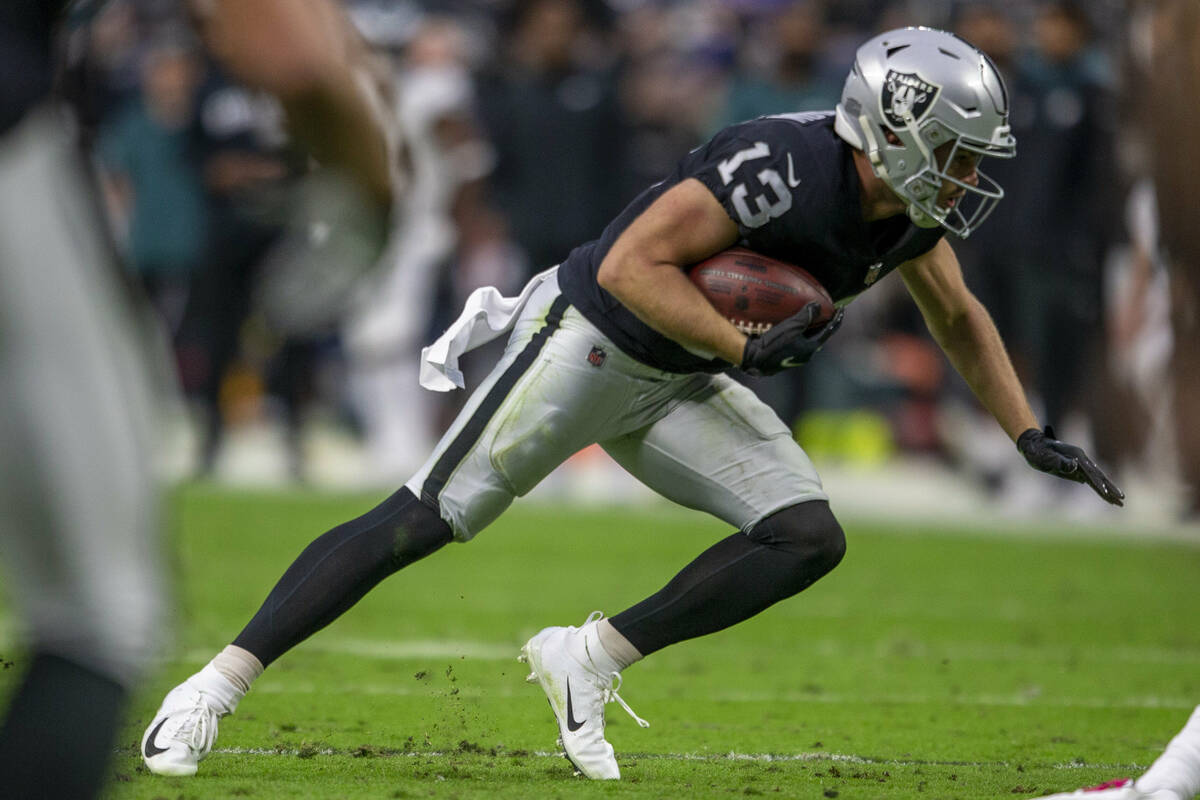 The Raiders are at the top of the AFC standings as they go through their bye week. That means a lot of positives to talk about through the first seven weeks of the season, which has produced five wins and two losses.

Here are three reasons for the strong start.

At the outset of training camp, new Raiders defensive end Yannick Ngakoue boldly predicted he and fellow edge rusher Maxx Crosby would be the best pass-rushing duo in the NFL.

Whether Ngakoue was trying to will something into existence or simply knew something no one else did, the statistics show he was onto something.

He and Crosby rank first and second, respectively, in quarterback pressures with a combined 74. They have also accounted for nine of the Raiders’ 18 sacks. Of those, the defensive line has come up with 17.5.

To put that in perspective, the Raiders managed just 21 sacks through 16 games last year, with 16 coming from the defensive line.

The complete turnaround upfront has helped transform what was previously a defense that was a liability into what has become one of the Raiders’ strengths.

Behind the revamped defensive line, linebacker Cory Littleton has settled down from a rough first season in Las Vegas to deliver competent play. Beside him, newcomer Denzel Perryman has been a revelation at middle linebacker, replacing the injured Nicholas Morrow, leading the team in tackles by a wide margin.

The Raiders rank 20th in the NFL in points allowed per game at 23.7, which is a big improvement from the 29.9 they surrendered last year.

The Raiders eighth-year quarterback is playing the best football of his career, and he has elevated that level since the sudden resignation of coach Jon Gruden two weeks ago.

Carr is ranked fifth among his quarterback peers, according to PFF, while throwing for 2,269 yards and 12 touchdowns against five interceptions. He has completed 67.7 percent of his 266 pass attempts, and the work he is doing at the line of scrimmage getting the Raiders into the right plays is more effective than at any point of his career.

Making it all the more impressive is Carr is working behind an offensive line that is still trying to find an identity after losing three starters from last season and then losing starting guards Denzelle Good and Richie Incognito to injury.

The struggles of the offensive line has also resulted in a spotty run game. Yet Carr has not missed a beat while playing as well as any quarterback in the NFL.

The Raiders deserve criticism for some of their draft misses over the last few years — Cle Ferrell, Tanner Muse, Damon Arnette and Lynn Bowden come to mind. But they have also hit on a number of picks and undrafted free agents. Many of them are emerging as consistent contributors.

Before Trayvon Mullen’s injury, the 2019 draft pick was ranked 26th among cornerbacks. Meanwhile, tight end Foster Moreau, a 2019 pick, has developed into a dependable offset to star Darren Waller.

This year’s first-round pick, Alex Leatherwood, has struggled thus far while moving from right tackle to right guard. But Nate Hobbs, a fifth-round pick, is ranked fifth at cornerback, and Tre’von Moehrig, a second-round pick, is 25th among safeties.

With trade proposal in place, Carr has a decision to make