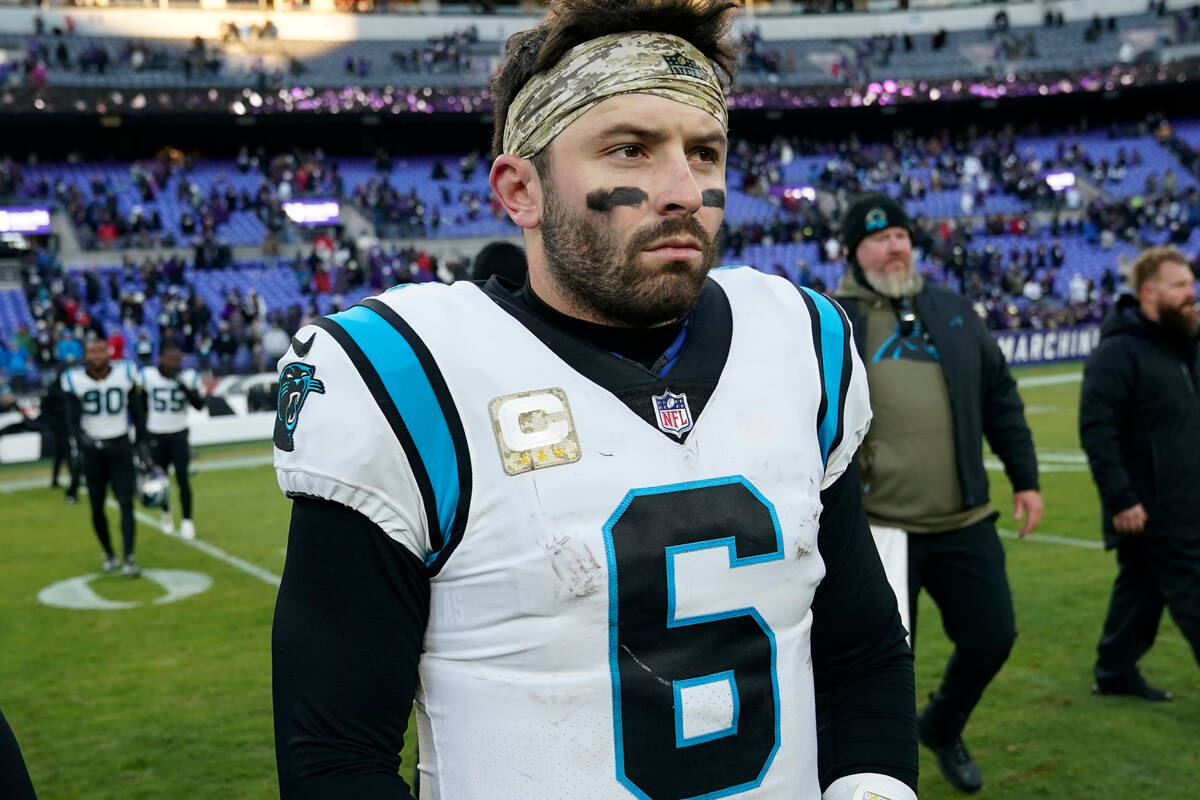 Carolina Panthers quarterback Baker Mayfield (6) walks off the field after his teams loss to the Baltimore Ravens after an NFL football game Sunday, Nov. 20, 2022, in Baltimore. (AP Photo/Patrick Semansky, File)

The competitor in Derek Carr would like to think he could join an NFL team on a Tuesday and quarterback them less than 48 hours later.

“There’s some systems that you can do that,” Carr said.

How practical that might be is, well, a whole other story.

In any event, that is the potential scenario facing Baker Mayfield, who was claimed off waivers on Tuesday by the Rams and could play against the Raiders (5-7) on Thursday night.

The defending Super Bowl champions are down their starting quarterback, Matthew Stafford, who is on the injured reserve list with a neck injury. And the status of his backup, John Wolford, is not yet known as he battles a neck injury.

Hence the surprising waiver wire claim the Rams put on Mayfield, who was released by the Panthers on Monday, and the possibility of Mayfield actually lining up against the Raiders on Thursday.

Rams coach Sean McVay was not scheduled to talk to the media on Tuesday, but offensive coordinator Liam Coen indicated the Rams (3-9) will use the remaining portion of the season to get a look at Mayfield in their system. Given their last-place status in the NFC West, what do they have to lose?

“It’s a chance to evaluate,” Coen said. “You’re always looking for competition at every position, and you’re looking for a chance to evaluate talent. That was the goal. We feel good about our room and the quarterback that we have for the future of the Los Angeles Rams, which is Matthew Stafford. But we feel obviously pretty good about somebody to come in here and compete at a high level for us.”

Therein lies the challenge for Mayfield, who must digest enough information over the next two days to play against the Raiders.

“I’m not sure of the systems that he’s been in, the terminology,” Carr said, pondering the possibility of Mayfield taking the field on Thursday.

Carr’s backup, Jarrett Stidham, thinks it’s doable, although plenty of factors would play into it having a chance to be successful.

“I don’t know, offensively, what he’s been with and what the Rams are, that kind of thing,” said Stidham. “I don’t know how similar or dissimilar they are.”

About the best Mayfield can do is hit the books as hard as he can and hope to find some common ground among the various offenses he has played in over the last few years.

Word of Mayfield joining the Rams arrived in Henderson while the Raiders were going through their walk-through on Tuesday. And it threw one more unknown into a short work week that is filled with them.

A rash of injuries has rendered the Rams a shell of their former selves, with star players like Stafford, wide receiver Cooper Kupp and defensive tackle Aaron Donald all sidelined for Thursday’s game.

But with the surging Raiders in no position to let a game slip through their hands, by no means are they taking anything for granted relative to who lines up in front of them Thursday.

“They’re still playing good football over there,” said Carr, serving up a warning that this is no time to focus on who will or won’t be playing for the Rams.

Now comes the surprise pickup of Mayfield, who the Raiders have to prepare for just as diligently as if it were Wolford or third-stringer Bryce Perkins.

“It matters,” said Raiders cornerback Nate Hobbs. “But from a competitor standpoint, it really doesn’t matter. We have to do our job, read our keys, and continue to work every day. And whoever is out there is out there. But we’ll prepare for both quarterbacks.”

At the very least, it makes for an interesting situation to monitor.

“He’s on the roster,” said Stidham. “You gotta think that everybody that’s on the roster has a chance to play at this point. I guess we’ll all just find out.”