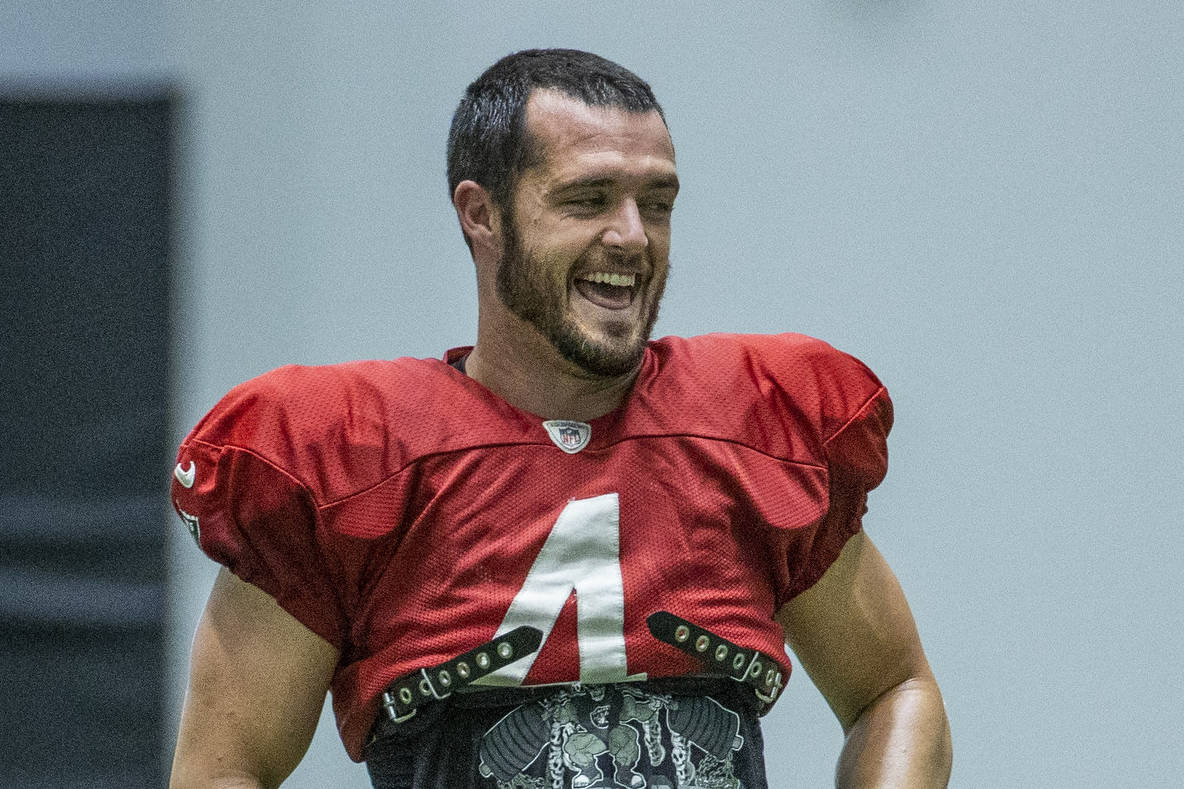 The unquestioned starter is coming off one of his best seasons and looks more and more comfortable in Jon Gruden’s system every day.

One of the best backup quarterbacks in the league, Mariota restructured his deal to stick around for another season.

Gruden continues to feel very comfortable with the former Bills bust as his emergency option.

The former first-round pick out of Alabama has eclipsed 1,000 yards on the ground in each of his two pro seasons.

A proven playmaker with the ball in his hands, Drake was brought in to be a factor in both the run and passing game as well as provide another red-zone option.

The former undrafted free agent has emerged as one of the game’s top fullbacks and an invaluable member of the offense.

The team expects a breakout sophomore campaign from last year’s first-round pick who was plagued by injury and inconsistency as a rookie.

Another second-year wideout primed to take a big step forward after an outstanding training camp that saw him consistently make good use of his size and strength.

The former Clemson standout has become Carr’s go-to option on third down as he always seems to be open.

A veteran speedster who is expected to step into the role vacated by last year’s leading receiver, Nelson Agholor.

If this was a make-or-break training camp for Jones, he left no doubt about his future with the team by making plays nearly every day.

Another veteran presence in the receiving corps, he brings 275 catches and 16 receiving touchdowns in six pro seasons with him to the Raiders.

One of the best tight ends in the league and the best player on the team, he is seeking his third straight 1,100-yard season.

The talented LSU product got a chance to recover from a major knee injury while learning under future Hall of Famer Jason Witten last season and appears poised to take on a much bigger role.

A solid blocker who can be an occasional weapon in the passing game, but holds his true value as a key special teamer.

A steady presence at left tackle, he has started 46 of the 48 games the Raiders have played since drafting him out of UCLA.

The 38-year-old returns to start at left guard after missing almost all of last season with an Achilles’ injury.

The Raiders gambled on their belief James was ready to take over as the starting center by trading away veteran stalwart Rodney Hudson.

He proved he was ready for a more expanded role by making 14 starts last season and will now slide into the spot vacated when Gabe Jackson was traded.

The rookie from Alabama was drafted to be the starting right tackle, a move that allowed the Raiders to rid themselves of Trent Brown and his contract.

He has made 62 starts at center in four years with the Texans and provides an insurance policy in case James isn’t ready.

One of the strongest players on the team, the Raiders hope his work in the weight room will translate to improvement on the field.

One of the league’s top pass rushers, he was brought in to reunite with defensive coordinator Gus Bradley and get to opposing quarterbacks.

The team’s sack leader his first two seasons in the NFL, Crosby may be even more effective with fewer snaps in a deeper group.

An anchor in the middle of the line of scrimmage, Hankins has been a disruptive force throughout training camp.

Despite his lofty draft status in the top five, Ferrell has been more of a quiet, steady player than an explosive force. He will play both inside and out on the line.

The Raiders solidified the interior of the line by signing one of the game’s top defensive tackles of the last decade.

Another big presence in the middle who is likely to sit atop a rotation of bodies.

He is looking to make a comeback after missing the last two seasons and showed enough in training camp to be part of the rotation.

A veteran defensive end who should get more than enough situational opportunities to make his presence felt on the edge.

A rookie out of Buffalo who could be a pure situational pass rusher, at least early in his career.

The former No. 3 overall pick is looking to bounce back from a knee injury that brought an unceremonious end to his time with the 49ers.

The team decided to bring him back after he played out his contract last season as one of the Raiders’ most-improved players.

He got bigger in the offseason and is fully healthy as he looks to bounce back from a disappointing first season in Las Vegas.

After missing all of last season with a foot injury, the converted college safety has been taking some reps with the starters, but figures to be most impactful on special teams.

It was a disappointing camp for a player who probably didn’t expect to be a backup when he signed a big free-agent deal with the Raiders before last season.

It hasn’t been a smooth start to his rookie season and his transition to linebacker as he missed the first several weeks of camp with an injury.

The team’s best returning starter in the secondary, Mullen still needs to take another step forward for the defense to be successful.

Very familiar with Bradley’s defense, he looks to have won a starting job after he was signed to be a veteran presence for a young cornerback crew.

A ball-hawking deep safety who will play right away after he was picked in the second round of the draft.

Perhaps no other player will benefit as much from the switch to Bradley’s defense, which has a role for a player with Abram’s skillset.

He came into camp bigger and stronger, but will need to show more on the field in order to increase his playing time.

The Raiders hope he can take another step forward in his development after seeing only limited action last season.

Coaches have raved about the rookie’s physicality from the moment the Raiders drafted him out of Illinois.

Allowed five receptions on just six targets as a rookie, according to Pro Football Focus.

The Raiders brought him back after one season in Cleveland to provide a veteran presence to an inexperienced safety group.

The fourth-round pick out of Missouri will look to have an immediate impact as a rookie.

Enters his third season having put 53 punts inside the 20-yard line with just eight touchbacks.

Tied for the league lead in points last season with 144, while missing just two field-goal attempts all year.

Colorado State alum was given a three-year contract this offseason after three steady seasons as the long-snapper.

Cornerback will serve a two-game suspension for a violation of the league’s performance-enhancing drug policy and doesn’t count as a roster spot.