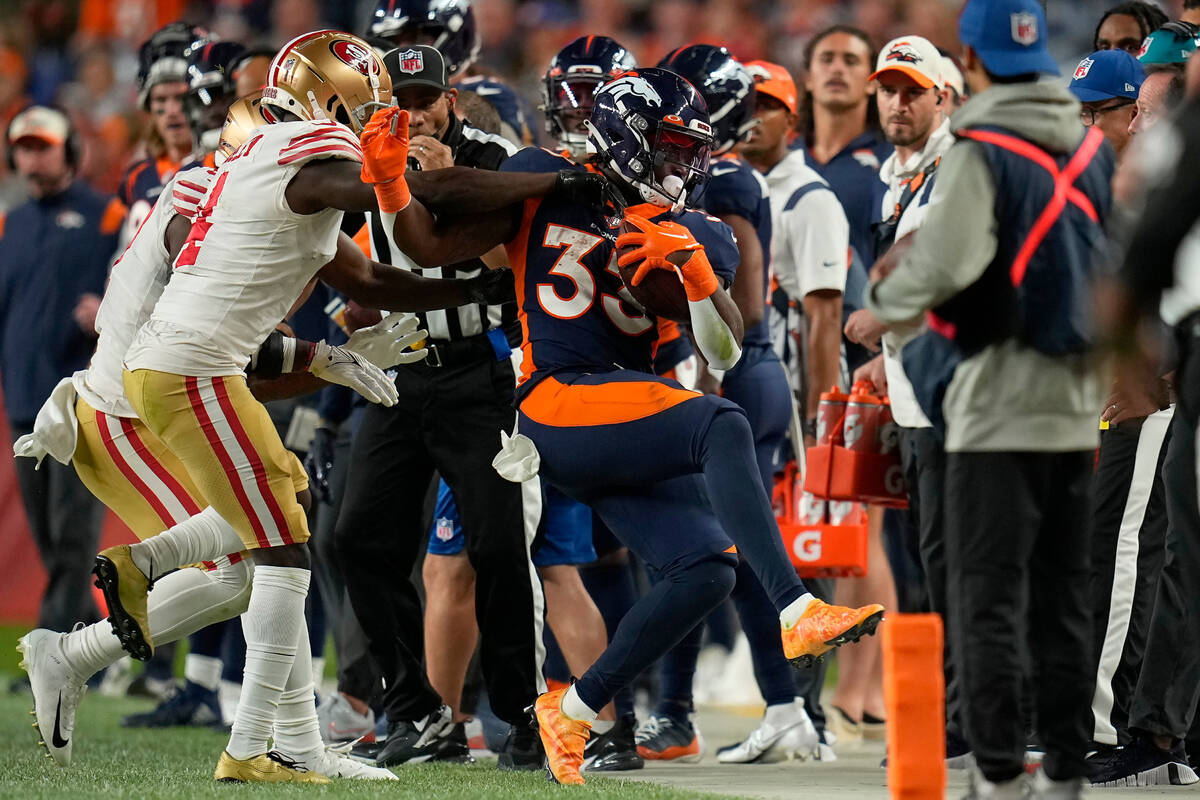 Denver Broncos running back Javonte Williams, right, is pushed out of bounds by San Francisco 49ers cornerback Emmanuel Moseley during the first half of an NFL football game in Denver, Sunday, Sept. 25, 2022. (AP Photo/Jack Dempsey)

Stay away from Derrick Henry and Mack Hollins? Find a way to get Treylon Burks in your lineup?

Thanks for the advice, moron.

The coup de grace in the debut of this feature last week was pointing out how much the Raiders had struggled against tight ends, which would make Austin Hooper a startable player.

So, of course, Tennessee Titans backup tight end Geoff Swaim is the one who scores a touchdown.

Fortunately, it’s early in the season, so there is time to bounce back. Seems to be a common theme.

So let’s give this another shot for Sunday’s Raiders-Broncos game at Allegiant Stadium by starting with one of fantasy football’s favorite subjects of the past two years.

As a rookie in 2021, Williams posted the best missed-tackle rate in the NFL, and there wasn’t a close second. The hope of the Broncos moving on from backfield mate Melvin Gordon sparked first-round hype for Williams.

Instead, Gordon returned, and Williams is again in a timeshare.

But there are promising signs for Williams. He has out-snapped and out-touched Gordon in all three games. He’s also averaging five catches per game and 4.8 yards per carry.

At some point, the share is going to tilt even more in Williams’ direction, and with the chaotic state of the running back in fantasy football, he’s probably a good trade target.

As for this week, the struggles of the Raiders’ linebacking corps in pass coverage makes Williams a solid play.

Here are the rest of the buy and sell recommendations:

Davante Adams, Raiders — Concern is starting to grow after he was held below 40 yards for a second straight week. Stop. He has scored a touchdown in all three games and had plenty of targets last week. The chemistry with Derek Carr will continue to develop, and Adams should get peppered with throws, especially after the strange national speculation about their connection this past week.

Russell Wilson, Broncos — The expectation when the Broncos made the massive deal for Wilson was that he was finally going to be able to cook, as the popular saying about the restraints of his previous offense in Seattle goes. Instead, he’s been getting roasted. This simply can’t continue. He has too much ability, and there is way too much talent for this offense to keep sputtering. Also, keep in mind there have been some fluky plays that have led to a dreadful mark in the red zone. Some regression to the mean will make his numbers and the team’s scoring average look more palatable.

Melvin Gordon, Broncos — If Williams does start to seize control of the backfield, it will by default come at the expense of Gordon. The veteran still can play, and it’s no knock against him. Williams is just special.

Mack Hollins, Raiders — Yes, this is a repeat from last week. Just when you read in this space that Hollins couldn’t continue his emergence, he shattered his career highs. He already has the most receiving yards of his career and needs two receptions to match his high for a season. He’s been added in nearly every league, but if someone is willing to make a strong trade offer, take it. Hunter Renfrow will be back soon.

Albert Okwuegbunam, Broncos — He’s still owned in 36 percent of Yahoo leagues and 26 percent of CBS leagues. Why? Talent is great, but fantasy football is all about production. Give him one more shot. If he can’t get right against the Raiders, who struggle against tight ends, it’s time to move on.