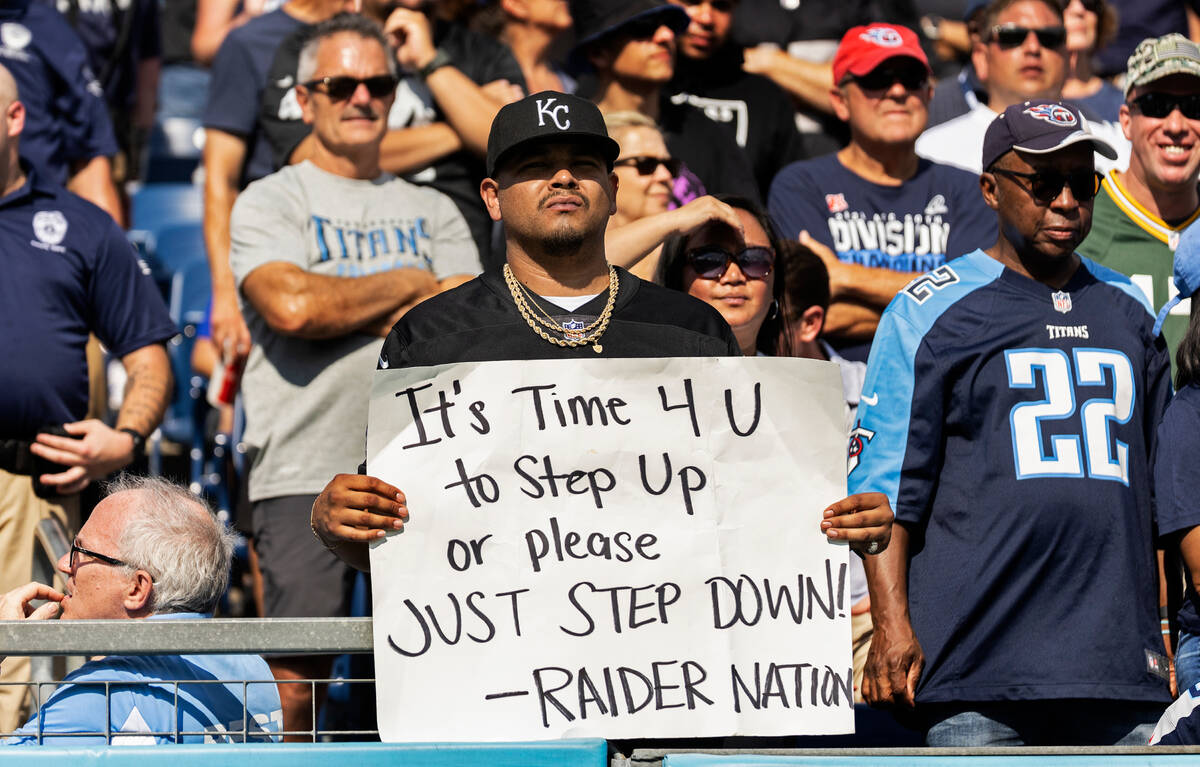 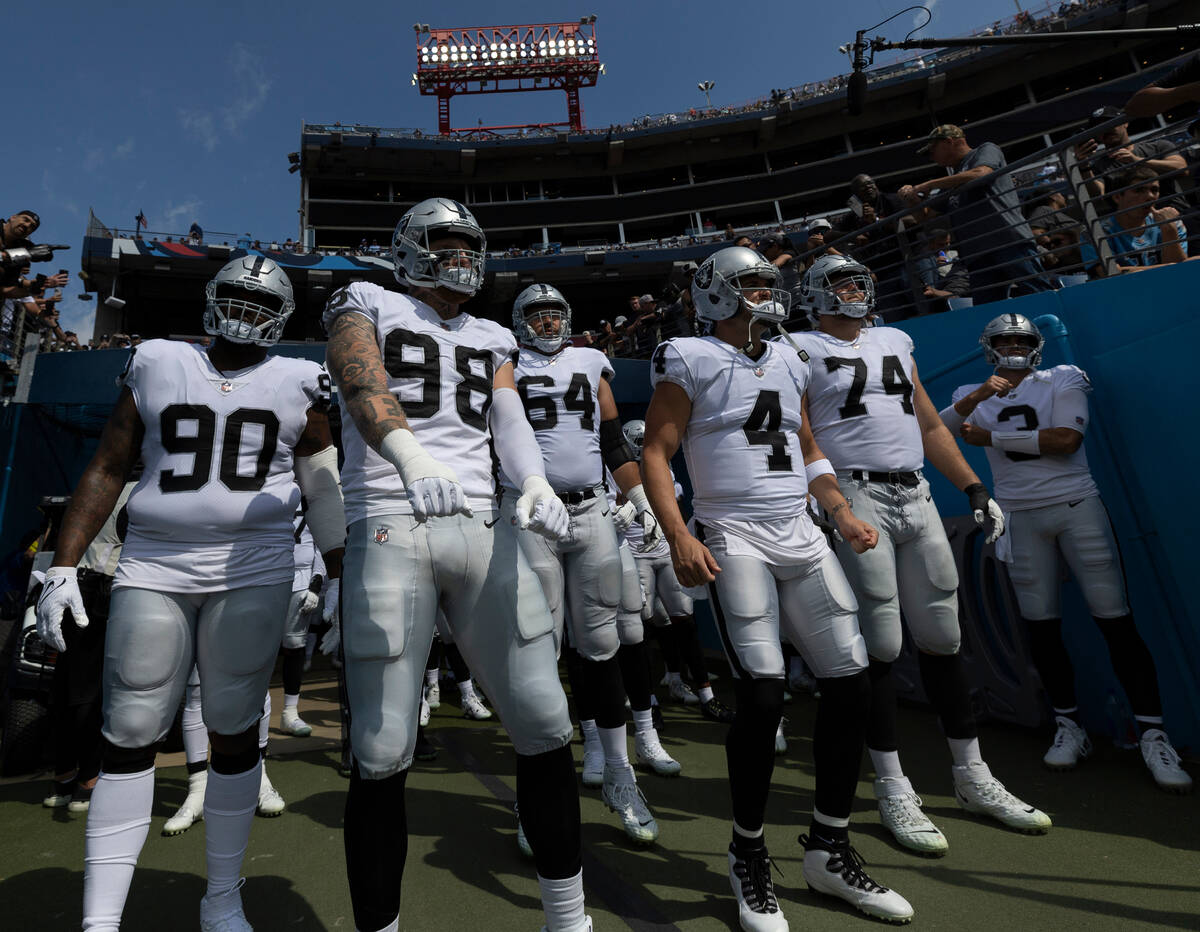 Raiders defensive end Maxx Crosby (98) and Raiders quarterback Derek Carr (4) get ready to lead their team onto the field before the start of an NFL football game against the Tennessee Titans on Saturday, Sept. 24, 2022, at Nissan Stadium, in Nashville, Tenn. (Benjamin Hager/Las Vegas Review-Journal) @benjaminhphoto 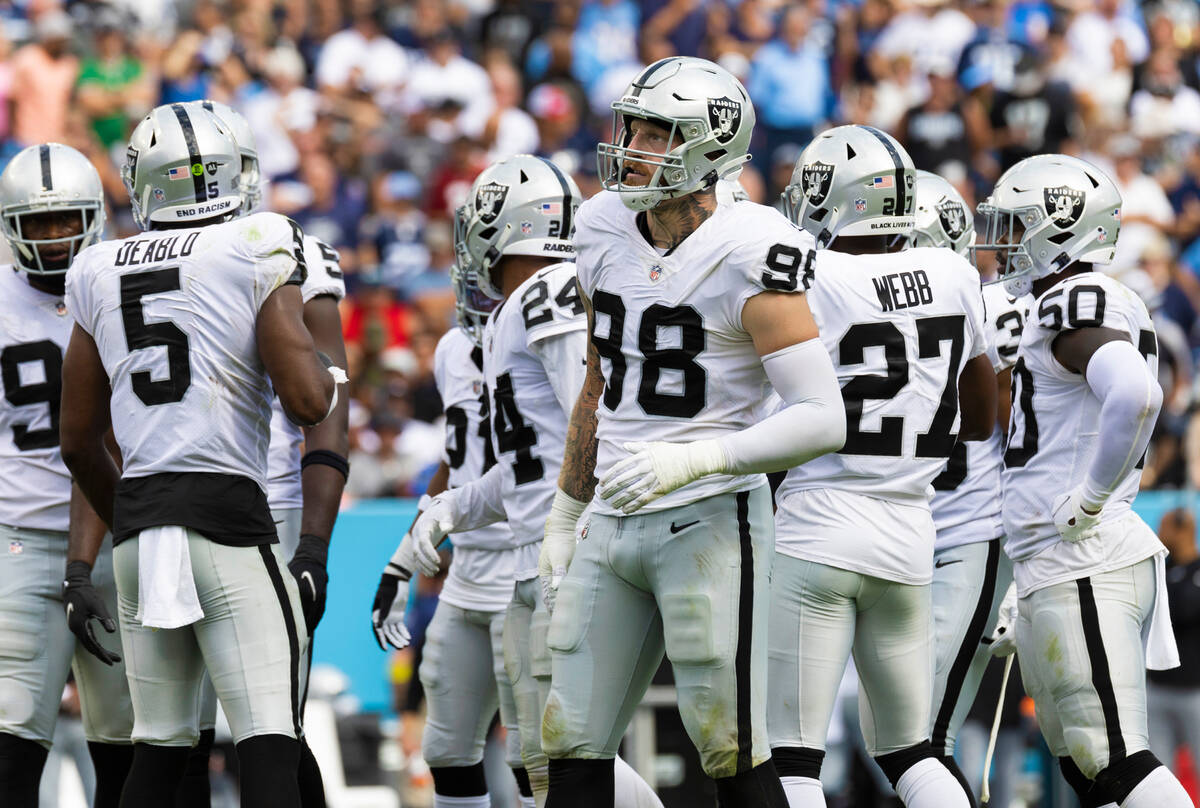 Raiders defensive end Maxx Crosby (98) looks up at the clock in the in the second half during an NFL football game against the Tennessee Titans on Sunday, Sept. 25, 2022, at Nissan Stadium, in Nashville, Tenn. (Benjamin Hager/Las Vegas Review-Journal) @benjaminhphoto 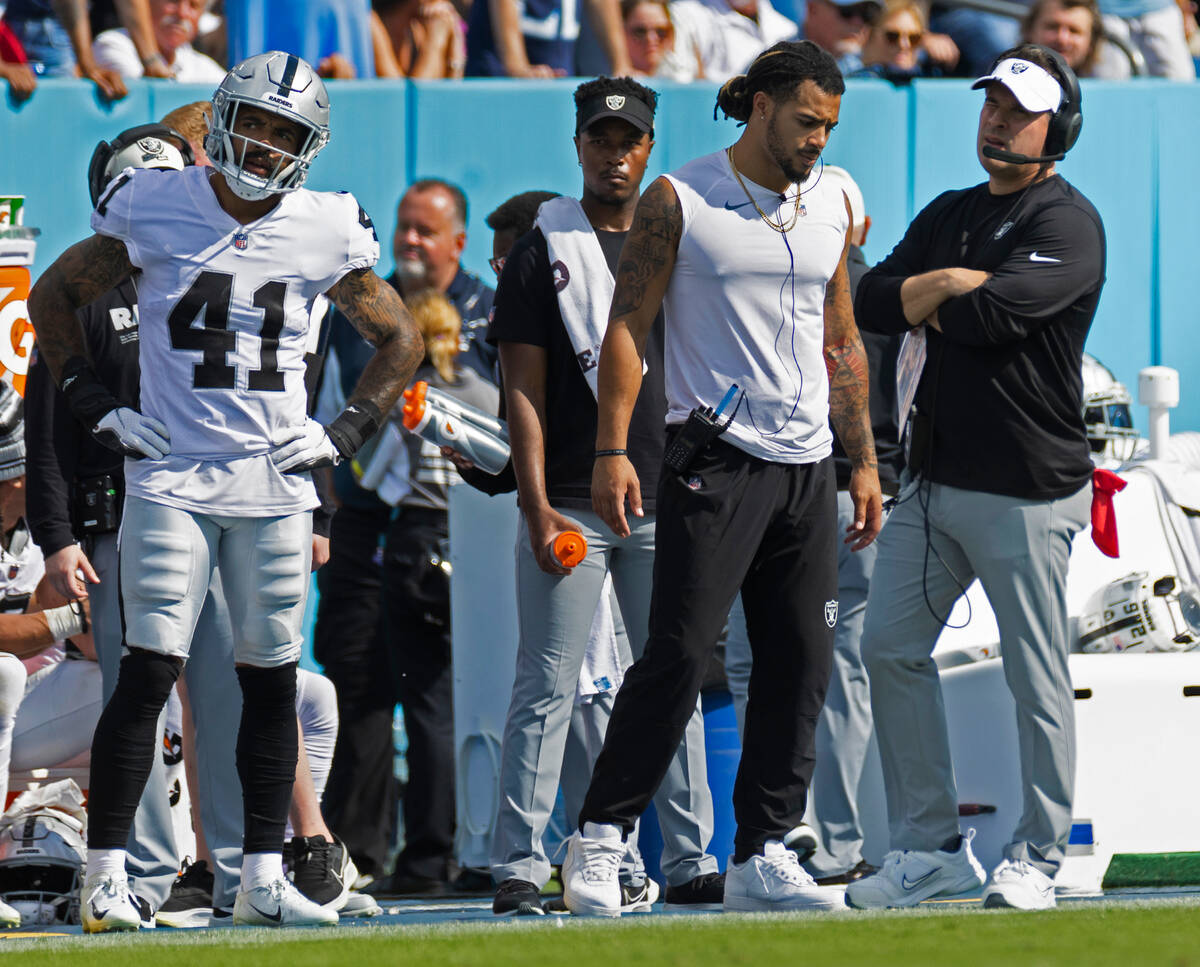 Raiders head coach Josh McDaniels, right, walks the sidelines with Raiders defensive back Matthias Farley (41) in the second half during an NFL football game against the Tennessee Titans on Sunday, Sept. 25, 2022, at Nissan Stadium, in Nashville, Tenn. (Benjamin Hager/Las Vegas Review-Journal) @benjaminhphoto

The Raiders had just lost their third straight game to start the season, falling to the Tennessee Titans after a dreadful first-half performance. So, sensing the importance of the moment, the captains decided a team meeting was immediately needed.

The objective wasn’t to assess blame but rather to find answers, said quarterback Derek Carr, one of the captains, of the Sunday meeting.

Tight end Darren Waller welcomed the opportunity from the captains to ward off any bad energy beginning to fester.

“I feel like it’s definitely important not to get into any finger-pointing or let any division kind of creep in,” Waller said. “There’s a lot of respect here, a lot of love for one another, and just because the results haven’t gone our way yet, it doesn’t mean that needs to go out the window. In order for us to really do what we want to do and build some consistency with some positivity, we’ve got to stay together.”

The meeting was frank, challenging and uplifting, Waller said.

“We’ve got to provide that space for people to be honest, but also mix in some love with that honesty,” he said.

The Raiders had high expectations for the season. They reunited Carr and Davante Adams, one of the NFL’s best receivers, to create a potential offensive juggernaut alongside Waller, receiver Hunter Renfrow and running back Josh Jacobs.

Add it up and a team coming off a playoff berth is the league’s only 0-3 club entering Sunday’s game against AFC West foe Denver (2-1) at Allegiant Stadium.

“I definitely feel the urgency from the captains on the team,” Waller said. “They just really care. And they’re challenging people to up their preparation, to do a little more recovery. Like, whatever it is, when you sit down to reflect, ask yourself what you can do better. That’s what the leaders are doing.”

The meeting was team-specific to fit a version of the Raiders now led by coach Josh McDaniels and general manager Dave Ziegler.

“It’s a different culture, right?” Carr said. “… It’s not the same team, so we couldn’t just go about the same way that we had been for the last couple of years in how we would fight through adversity.

It remains to be seen how much impact the meeting will have. Carr and Waller pointed out that practices this week have been positive and energized with an attention to detail.

“Everyone responded on Monday so well to the critiques from our coaches,” Carr said. “… That’s our job as leaders, to make sure that stays. I thought we answered that well.”