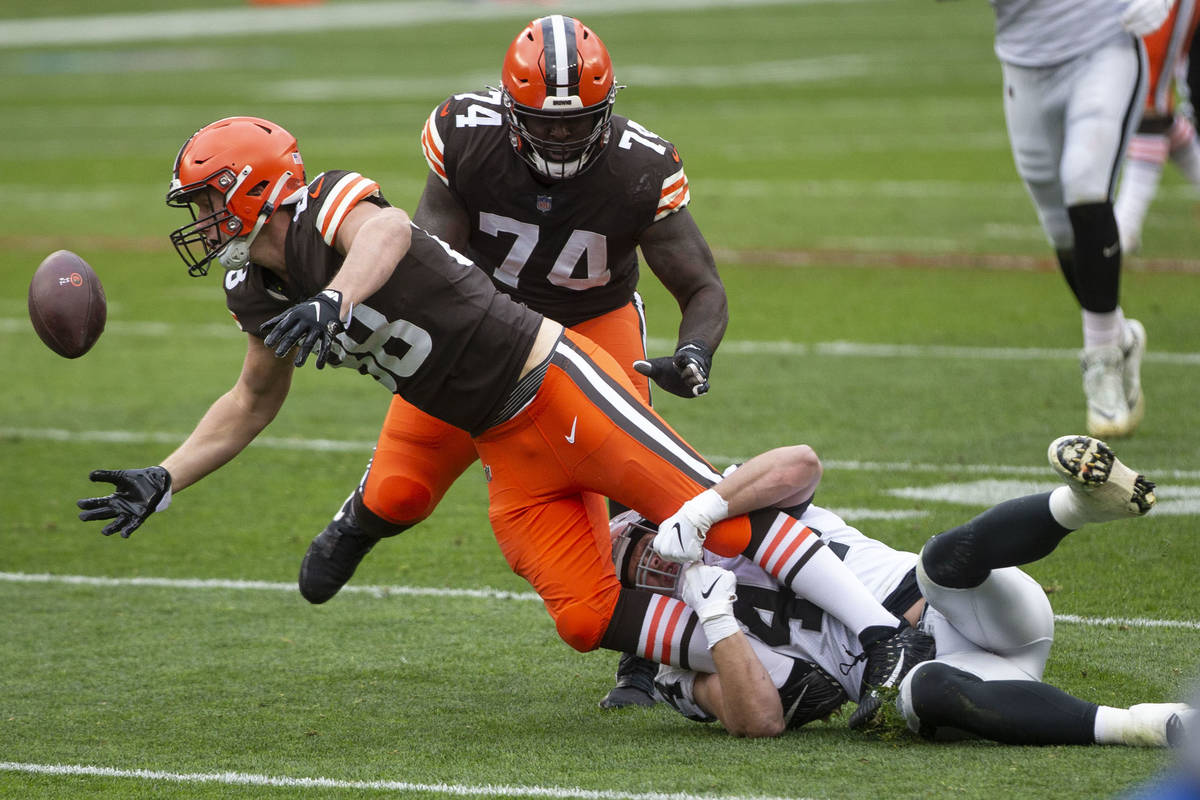 Jon Gruden promised changes would be coming to the Raiders’ defense after last Sunday’s ugly home loss to the Buccaneers.

There was a great deal of speculation about what Gruden had in mind after the Raiders gave up 45 points to Tampa Bay, ranging from seeking to improve the roster through the trade market to firing defensive coordinator Paul Guenther.

The adjustments proved to be far more subtle in Sunday’s 16-6 win over the Browns.

Gruden said eliminating big plays and forcing turnovers were major points of emphasis in the week leading up to game.

“We wanted to be able to get more hats to the ball, knock out the big plays,” he said. “Try to create some turnovers. Those were priorities. Really just playing more consistently. That is what we are after. We still have a long way to go, but we did make some strides today. I thought we had a lot of contributors and we didn’t have as many mental errors.”

One of the more noticeable tweaks was involving safety Johnathan Abram more as a blitzer, a move that enabled Abram to make more plays around and behind the line of scrimmage.

“Whenever (Guenther) calls my number, I just try to do it to the best of my ability, hitting the creases and making sure I’m low. … So I was just trying to do my best and do what I was coached to do,” said Abram, who wasn’t bothered by the cold and nasty Cleveland weather.

Abram’s presence helped limit the Browns’ Baker Mayfield to 12 of 25 passing for just 122 yards on Sunday, though Mayfield said he wasn’t surprised by much of what the Raiders did schematically.

“The Raiders kind of do what they do,” he said. “They are going to play a two-shell safety defense until you force them to get out of it in the run game. They eventually started bringing some of those safeties off the edges and bringing some pressure to try and stop that run game. … They play hard. We just did not make enough plays today.”

Kwiatkoski made a big impact early. He forced Browns’ tight end Harrison Bryant to fumble on Cleveland’s first drive, the first time the Raiders have taken a fumble away from an opponent this season.

“It was a tight end screen and I was kind of in the trail position,” Kwiatkoski said. “I had an opportunity to just swipe the ball. I tried to get it. I had no idea that it popped out until after the play.”

The Raiders on Sunday went a full game without surrendering a touchdown for the first time since a Dec. 16, 2012 win over the Chiefs.

“I think the first thing coach said to us in the locker room was, ‘How about that defense?’” quarterback Derek Carr said. “The way they played today, they won the football game for us. It was awesome.”

The Raiders allowed just 223 total yards, the fewest they’ve surrendered under Guenther and their best performance since allowing just 216 yards to the Eagles in 2017.

There was some assistance from brutal weather coming off Lake Erie and an offense that controlled the ball for 37:43. The Browns had just six possessions, the fewest in an NFL game in 30 years.

Still, the defense did its job by not allowing a touchdown in a game that could be pivotal in the AFC Wild Card race.

Sunday also marked the first time the Raiders’ maligned defense has held an opponent below 24 points this season. The unit entered the game fourth worst in the league in yards allowed per play.

The Browns entered the game third in the league with 157 rushing yards per game. Las Vegas held them to 101 yards on 22 carries.