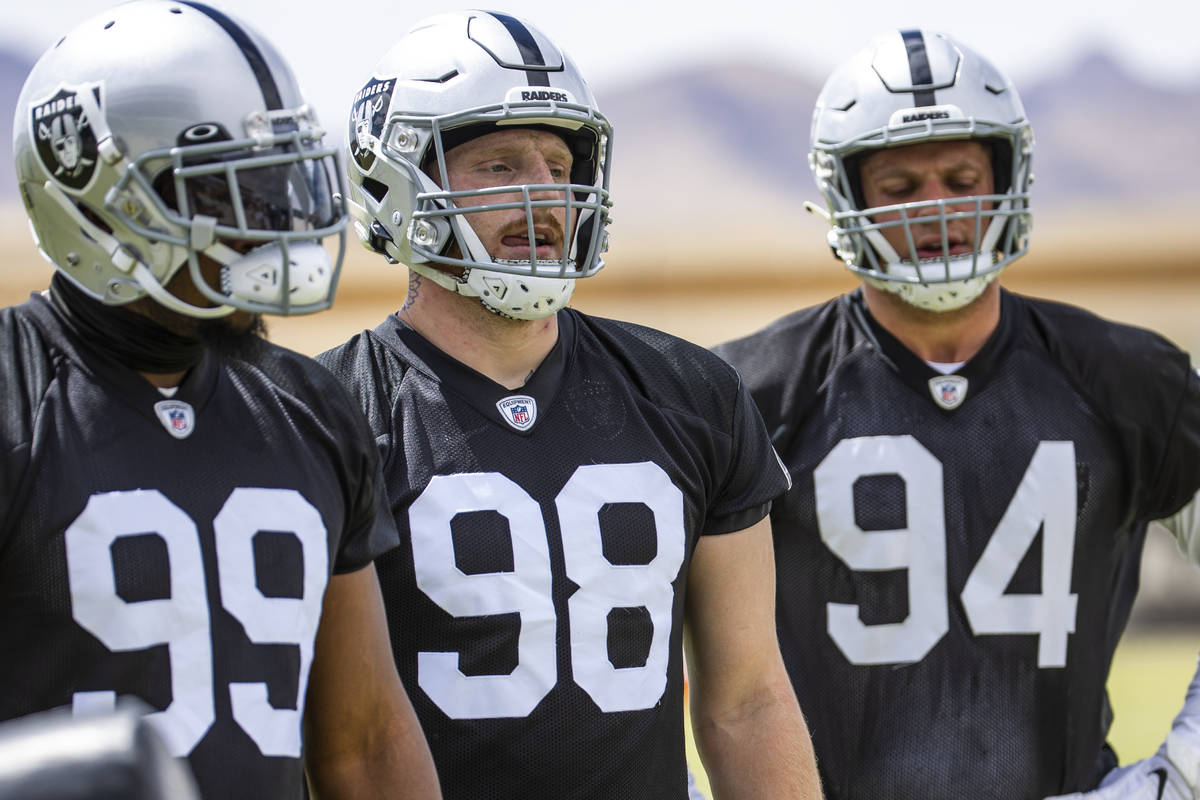 The Raiders wrapped up another week of organized team activities, and fans have plenty of questions about where the roster stands and who has stood out in OTAs.

AM (@AMikhailpoor): After the first couple of weeks of OTAs, which position group has impressed and which still needs some work?

VINCENT BONSIGNORE:From a pure depth standpoint, the defensive line and secondary have impressed.

Even with new rush end Yannick Ngakoue not taking part yet, the defensive line group looks deeper and more versatile than it has the last two years. Both Maxx Crosby and Cle Ferrell look to be in great shape and have been flying around during individual and position group drills.

Behind them, Carl Nassib and rookie Malcolm Koonce have both flashed as well. When you add Ngakoue to the mix, it has the makings of a much-improved rotation.

Inside, newcomers Solomon Thomas, Darius Philon and Darius Stills and holdovers Johnathan Hankins and Kendal Vickers have the potential to be a decent group. And that isn’t even counting veteran Quinton Jefferson, who has not been taking part in OTAs.

In the secondary, the cornerback group has been strengthened by the addition of veteran cornerbacks Casey Hayward, Rasul Douglas and the selection of Illinois corner Nate Hobbs. They join holdovers Trayvon Mullen, Damon Arnette, Nevin Lawson, Keisean Nixon, Amik Robertson and Isaiah Johnson.

Regarding position groups that need work, the depth behind starting linebackers Cory Littleton, Nick Kwiatkoski and Nicholas Morrow is highly untested and inexperienced. And at wide receiver, while Henry Ruggs and Bryan Edwards have looked good thus far, it might not be until the season starts that the Raiders get a good idea about where they really are at wide receiver.

DaDDyDominatee (@DaDDyDominatee): Is the signing of veteran offensive lineman Sam Young simply a play at depth? Or is it to make sure we aren’t putting too much burn on Alex Leatherwood his rookie year?

VB: The Raiders are expected to bring back Young to beef up the reserve depth. Leatherwood has looked good, so this move does not appear to be tied into the rookie from Alabama. It could signal some concern behind Leatherwood and left tackle Kolton Miller, which means Brandon Parker and Jaryd Jones-Smith are probably on notice a bit.

DatCerealKilla (@pbmcgeough): Other than losing Rodney Hudson, give me three reasons why our O-line won’t be better than last year’s unit.

VB: The biggest reason for any step back would be Leatherwood not providing sufficient play at right tackle and Denzelle Good and Andre James not adequately replacing Gabe Jackson and Hudson at right guard and center, respectfully.

One thing to keep in mind when contemplating being better or worse than last year’s offensive line: The projected starting group in 2o2o played just four snaps together because of injuries and COVID-19. The Raiders believe this year’s group has the potential to be better merely by having its starting unit consistently play together.

Health is always an issue, and in this year’s case, the Raiders are counting on new starters in James and Leatherwood delivering reliable production.

Jesus Jimenez (@86Chuy68): Which rookie has stood out the most (including the undrafted players)?

VB: Alex Leatherwood and Tre’von Moehrig have both practiced with a maturity that stands out. Big things are expected from the Raiders’ first- and second-round draft picks, and they already look ready to fill two big positions.

Sickayall (@Sosickayall): Is there a scheme in which we might see three safeties on the field with Karl Joseph, Tre’von Moehrig and Johnathan Abram?

VB: The package you are referring to is called “Big Nickel” and it means adding a third safety on the field to fill a hybrid linebacker/cornerback position. With offenses utilizing “12” personnel (one running back, two tight ends, two wide receivers) more and more, defenses needed a better match-up option, especially from a physical standpoint.

The third safety offers a bigger, more physical option than a cornerback in both run support and pass coverage against tight ends. And unlike bigger linebackers, they are better able to run with tight ends and running backs in pass coverage. Without question, there will be situations when the Raiders use “Big Nickel.”