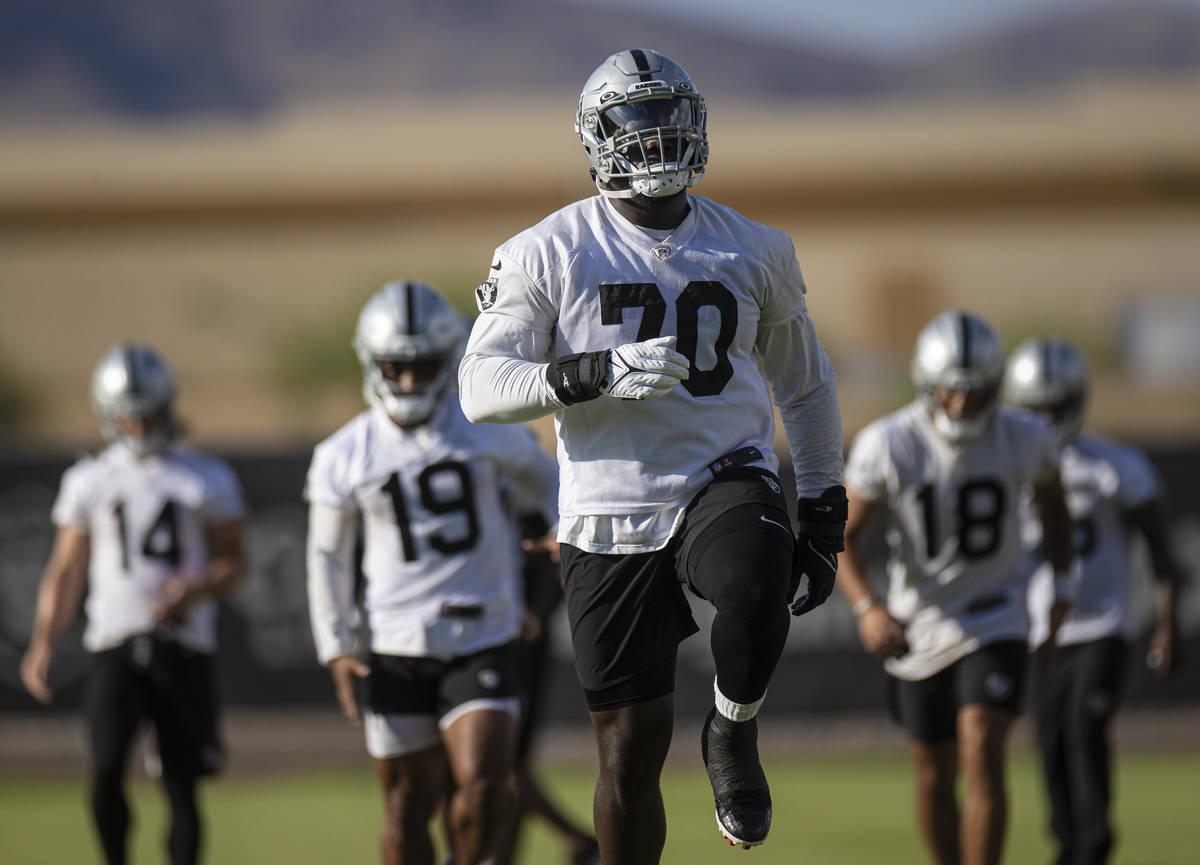 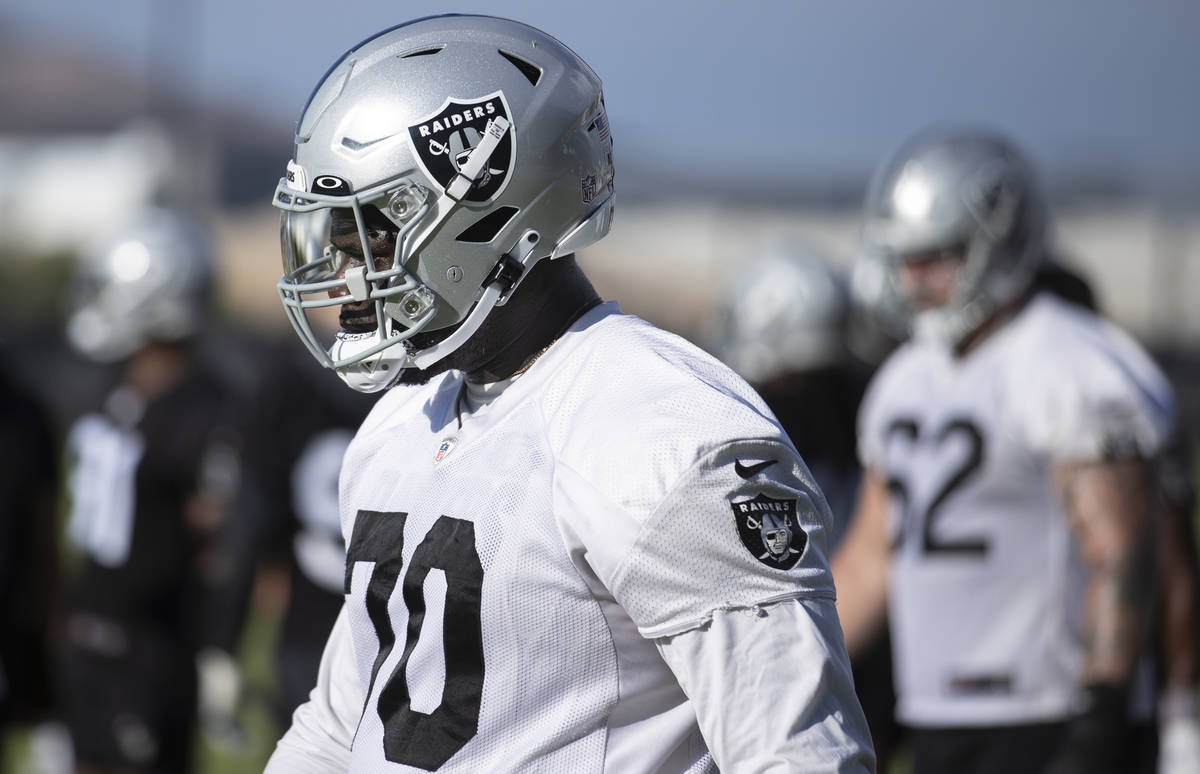 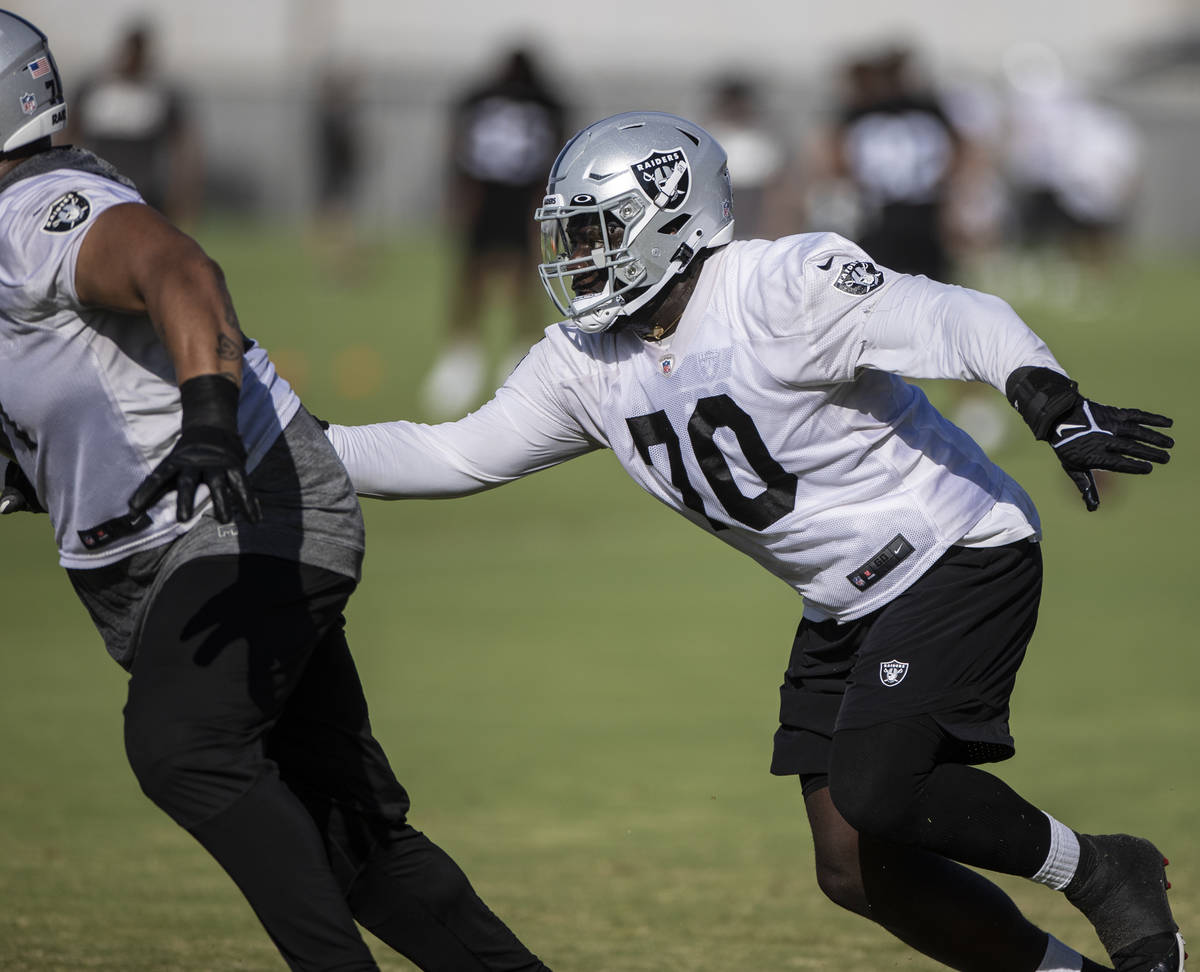 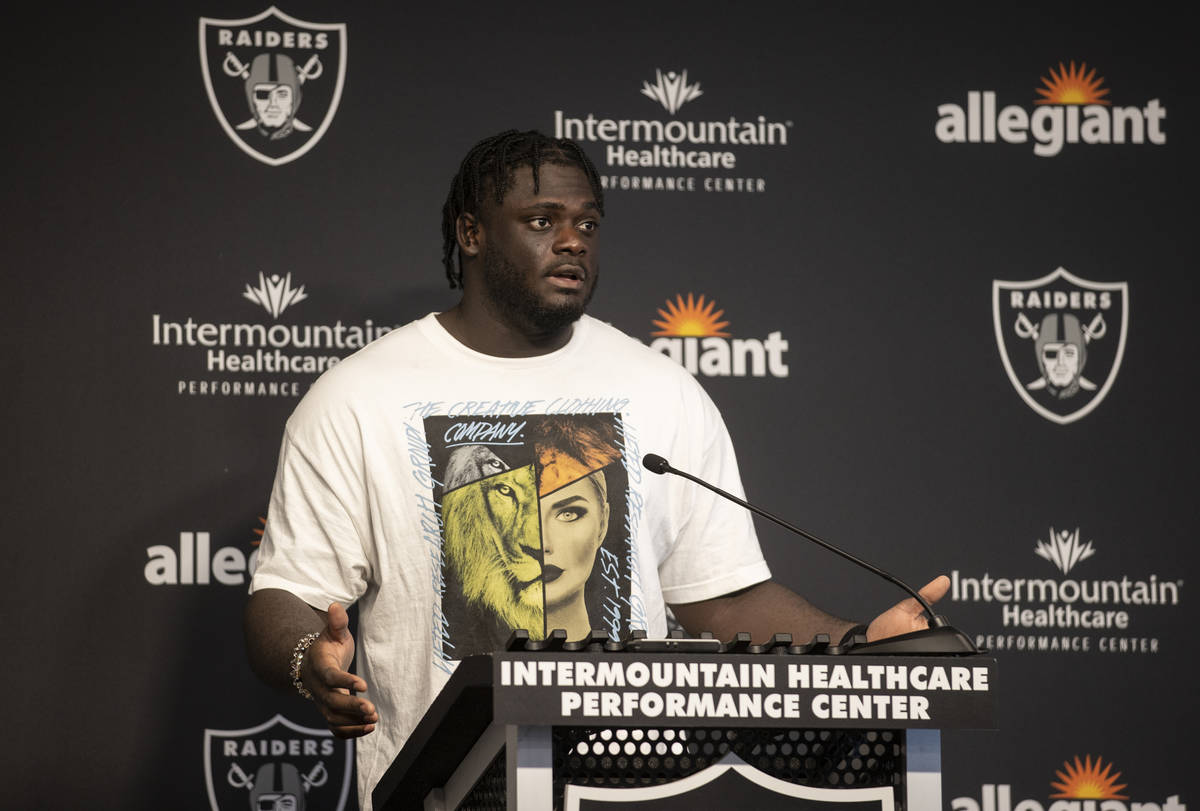 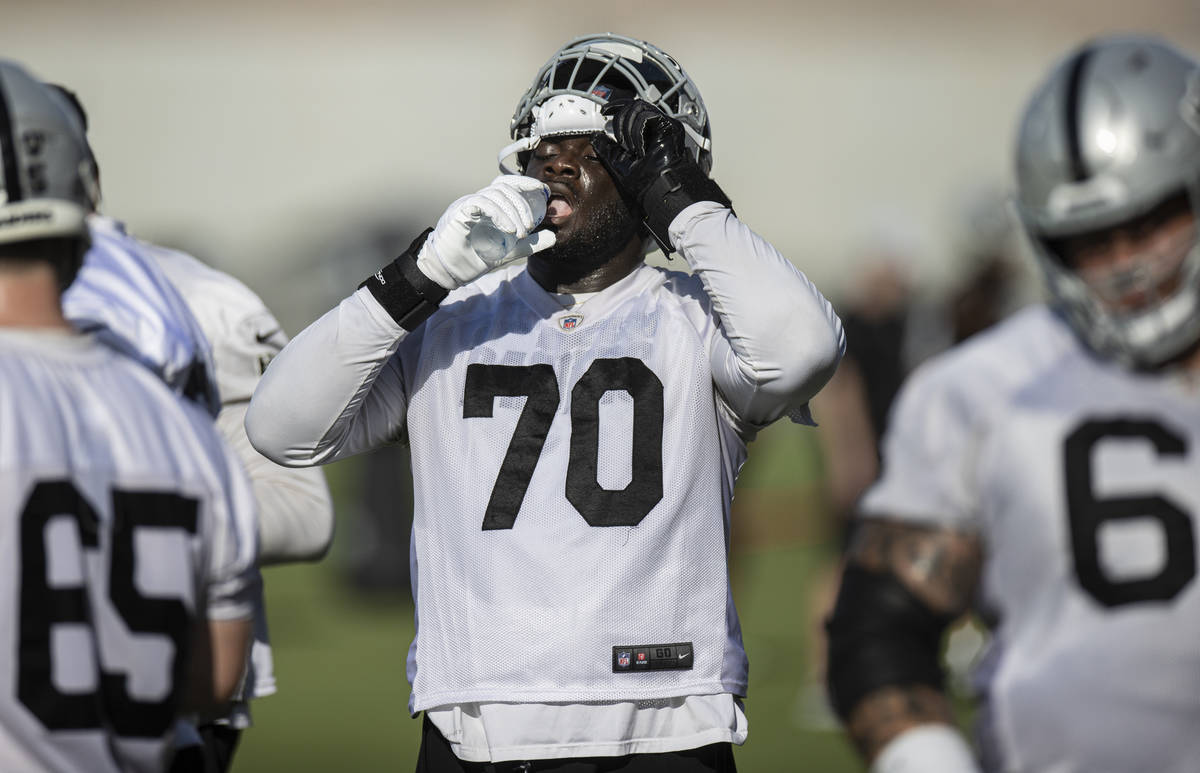 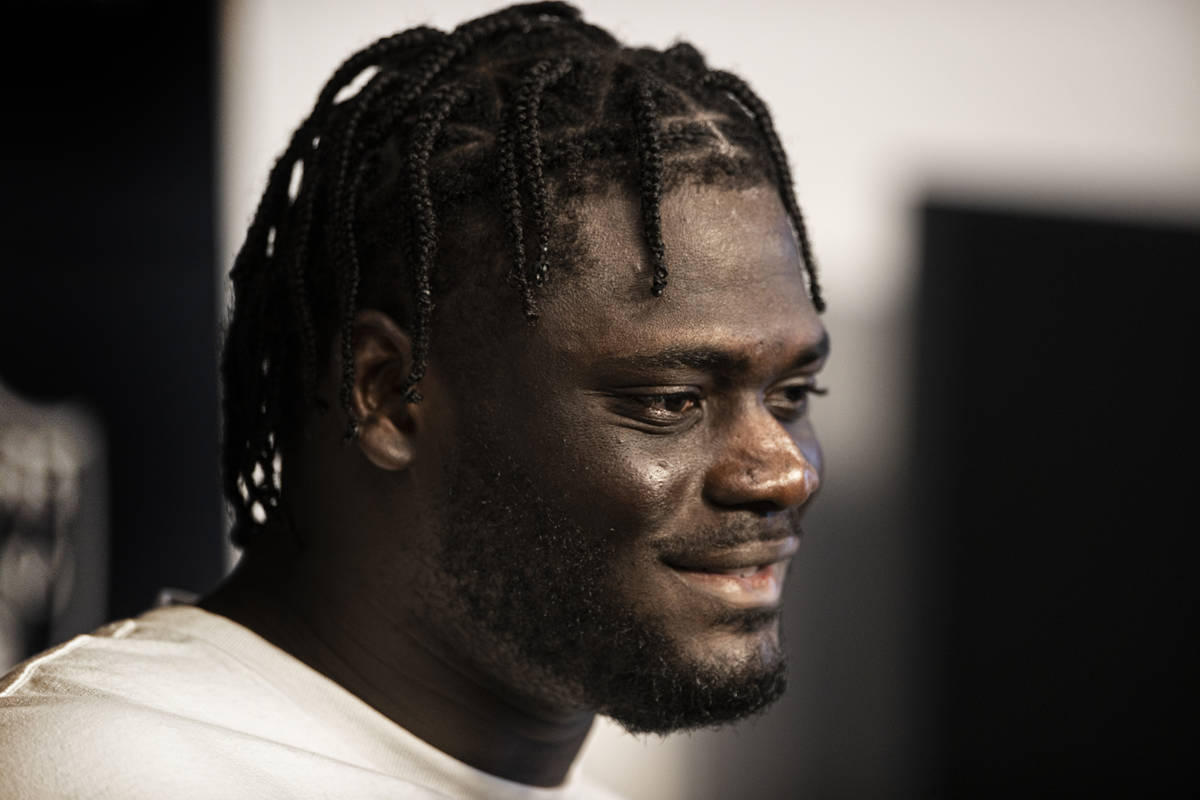 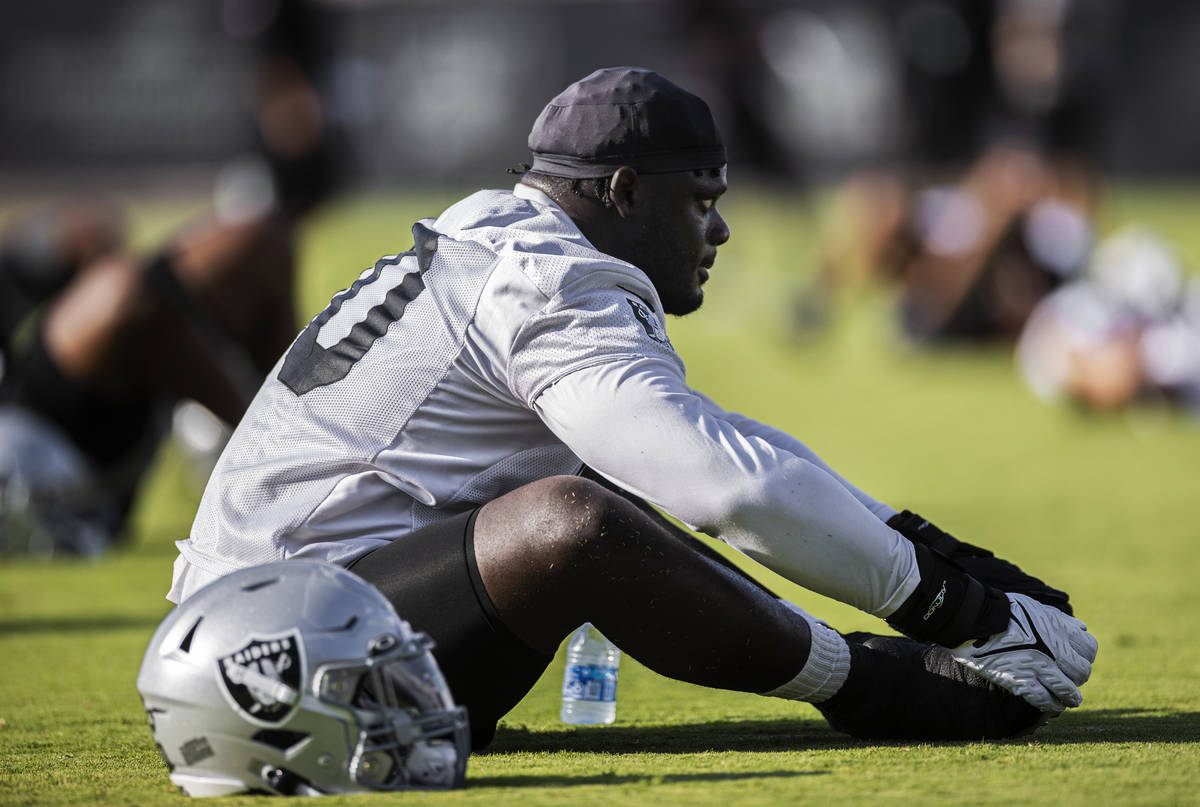 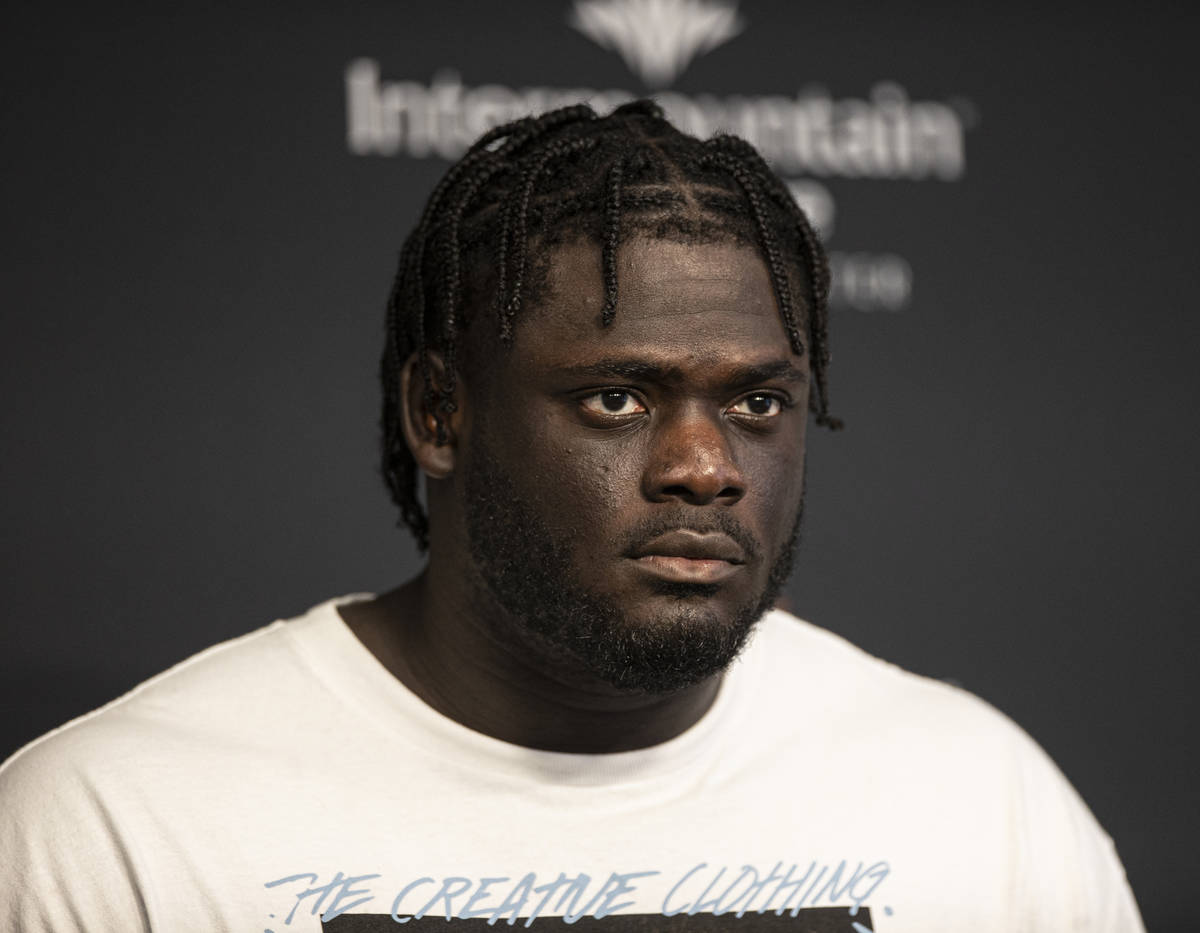 If you track Alex Leatherwood long enough on the Raiders’ practice field, one thing becomes clear. His no-nonsense, workmanlike demeanor defies his status as an NFL rookie.

The way he plays and interacts with teammates, it feels as if he’s been here for years. It all starts with his bottom-line, matter-of-fact approach. “I’m here to work,” Leatherwood said on Saturday.

A longtime friend could only smile when someone mentioned Leatherwood’s old-school ways. “That’s always been Alex,” Raiders running back Josh Jacobs said with a laugh.

If anyone knows Leatherwood, it’s Jacobs, who was at Alabama four years ago when Leatherwood showed up in Tuscaloosa as a freshman and immediately fought through the maze of five- and four-star recruits to earn playing time in his first year.

By his sophomore season, Leatherwood had locked down a starting job and was blowing open holes for Jacobs to run through. About the only thing more infrequent than a break from his old-man demeanor was missing a block or giving up a sack.

“I mean he might crack a couple of jokes every now and again,” Jacobs said. “But he just goes about his business. He works.”

Between that approach and how he uses his strength and athletic ability to physically stand up to Raiders defensive linemen, Leatherwood has quickly caught the attention of his veteran teammates. Many of them have to remind themselves the former Alabama standout is completing just his first week of training camp.

“Probably one of the more focused rookies I’ve ever been around in my life” is how Raiders tight end Darren Waller put it. “Very locked in on his responsibilities. He just wants to pound on people.”

Or, as defensive end Yannick Ngakoue put it: “I can tell he’s going to be a stud.”

Given the criticism the Raiders took on draft night for selecting Leatherwood with the 17th pick in the first round, the early impression he is making might be a surprise. The Raiders took Leatherwood over a couple of higher-ranked prospects.

While time will decide whether Jon Gruden and Mike Mayock made the right choice, it’s worth mentioning that the Raiders’ fascination with Leatherwood extends far beyond the 2021 draft process.

In fact, former Raiders right tackle Lincoln Kennedy revealed that Raiders offensive line coach Tom Cable reached out to him in 2018 and asked him to keep an eye on Leatherwood to track his progress.

“He was on the Raiders’ radar for a long time,” Kennedy said. “The admiration for him only grew over time.”

Over the next three years, Leatherwood would move to left tackle, where he anchored one of the best offensive lines in the country. Last year he won the Outland Trophy, awarded to the nation’s best offensive linemen, while helping Alabama win the national championship.

“This is one of the most outstanding college offensive linemen to come out of college football ever,” Gruden said.

Just to be sure their instincts were correct, Gruden and Mayock turned to a trusted source during the draft process to get a better look at Leatherwood.

“They called me a few times and asked me what were my thoughts and what was my relationship with him and things like that,” Jacobs said. The glowing feedback he provided helped cement the Raiders’ decision.

“To be honest, it means a lot that he thinks that highly of me,” Leatherwood said of Jacobs’ support.

Leatherwood hopes to return the favor by being one of the keys that unlock the Raiders’ run game, part of which is predicated on gashing opposing defenses in zone runs to the right side of the line of scrimmage.

Leatherwood’s ability to make the initial block, then motor to the second level to help ward off the next wave of tacklers will be critical to achieving that objective.

Best yet to come?

The Raiders won’t practice in full pads until next Tuesday, at which time Leatherwood can finally unleash all his physical skills. But there is plenty to accomplish in practice between now and then.

“Trying to be detailed in my technique,” Leatherwood said. “Although we don’t have on pads, you still got to have full speed hands and feet. Hitting your landmarks, taking the right steps, good hand placement. If you rep all of those things, it’s going to carry over.”

In the process, he’s making a favorable impression on his teammates.

“He’s super athletic,” said Denzelle Good, who lines up alongside Leatherwood at right guard. “His mental game, he’s always working to improve something. He’s always communicating with me about what he can do better. Sometimes I have to remind him, ‘You don’t have to do everything, everything ain’t on you. I’m here, I’ve got your back. We’ve all got your back.’”