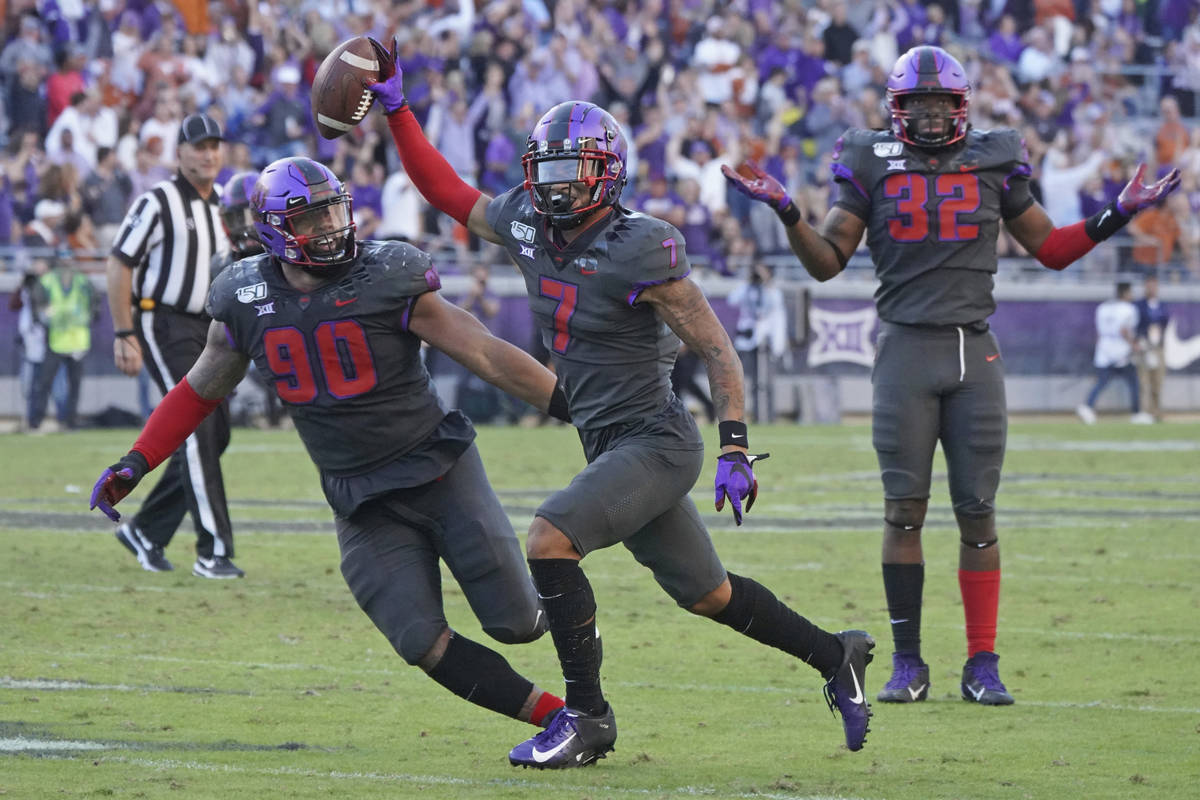 TCU safety Trevon Moehrig (7) celebrates his interception with teammates Ross Blacklock (90) and Ochaun Mathis (32) in the second half of an NCAA college football game in Fort Worth, Texas, Saturday, Oct. 26, 2019. (AP Photo/Louis DeLuca) 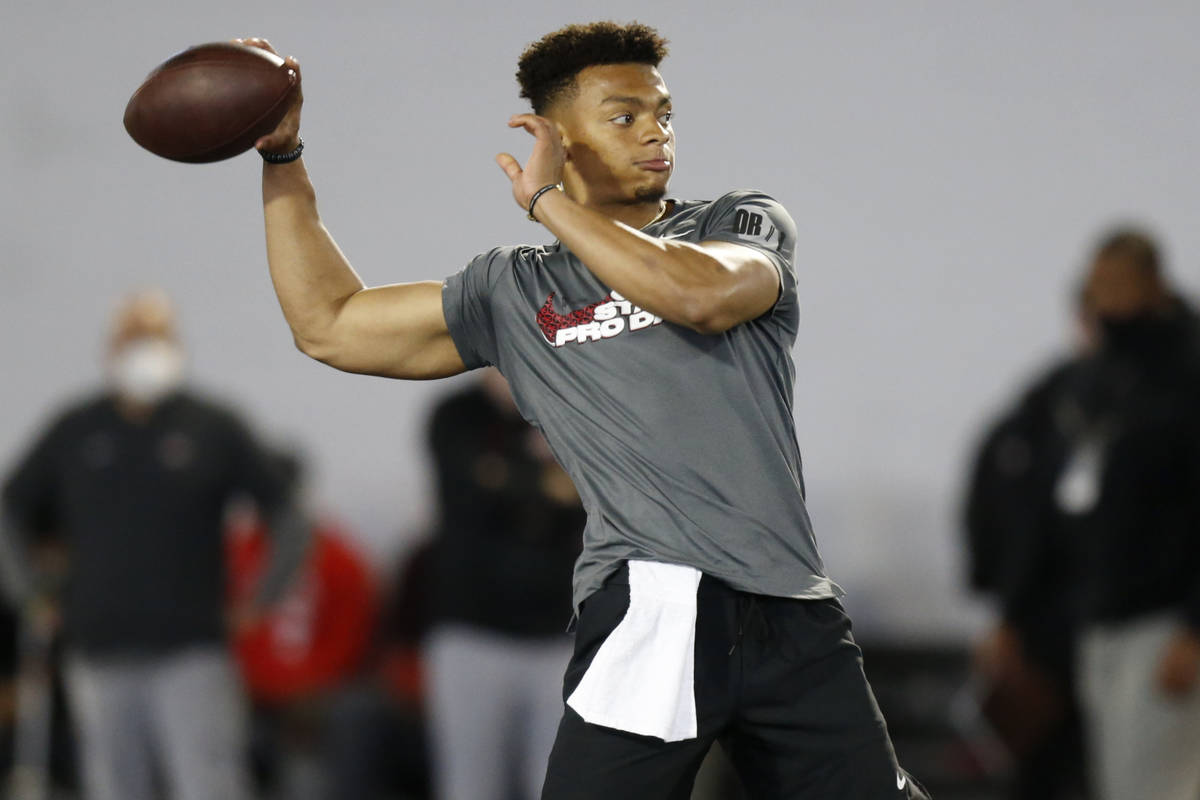 Another version of the Review-Journal mock draft, another player connected to the Raiders.

While opinions have started to codify around the Raiders selecting an offensive tackle, the team has plenty of other needs.

Safety Trevon Moehring, the only projected first-round pick at his position, would be a good candidate to compete for a starting job and give the organization another young member of the secondary to build around.

The next and final version will be released on April 29, draft day.

Please note: This draft assumes teams will pick players at their assigned spots and does not account for future trades. A player’s previous draft position is in parentheses.

Trevor Lawrence, QB, Clemson (1) — There hasn’t been any mystery about this pick since the day the Jaguars secured the top spot.

Zach Wilson, QB, BYU (2) — Unless the Jets are playing an elaborate game, Wilson is the pick. The trade of Sam Darnold at least confirmed they plan to pick a quarterback.

(From Miami Dolphins via Houston Texans)

Justin Fields, QB, Ohio State (3) — This is the first unknown of the draft, and the 49ers have done a good job protecting the secret. The bounty they had to surrender to move up to this spot almost guarantees it’s a quarterback. Fields should be the pick, though it’s far from a lock.

Kyle Pitts, TE, Florida (4) — The phones in the Falcons’ war room are likely to be ringing constantly with trade offers for this pick, particularly if Fields is still available. It’s possible they will listen, but drafting Pitts could make this offense lethal.

Ja’Marr Chase, WR, Louisiana State (6) — The Bengals should probably draft Penei Sewell to help rebuild a shaky offensive line and protect their investment in Joe Burrow. The young quarterback, however, is believed to be pushing hard for his former college teammate and may win the argument.

Jaylen Waddle, WR, Alabama (12) — This could come down to a choice between the Alabama receivers Waddle and DeVonta Smith. Teams can’t go wrong with either.

Penei Sewell, OT, Oregon (5) — Detroit is in desperate need of a big-play wide receiver, but there is also a need on the offensive line and Sewell is the best of the bunch. The Lions are fortunate he’s still around here.

Rashawn Slater, OT, Northwestern (8) — A second consecutive offensive lineman goes off the board as the Panthers fill a need. Quarterback is still a possibility, but the Panthers could wait and take a flyer on a developmental project later in the draft.

Patrick Surtain, CB, Alabama (10) — There is debate about the best cornerback in the draft. Surtain is nearly as explosive an athlete as Jaycee Horn and has a slight edge in length.

Azeez Ojulari, Edge, Georgia (23) — This may be a bit of a surprise, but the buzz about him has been gaining momentum. Ojulari was Pro Football Focus’s highest graded pass-rusher in the Power 5 and has great burst and hands.

DeVonta Smith, WR, Alabama (7) — The Eagles would be happy with any of the top three receivers falling to them. The Heisman Trophy winner would be a welcome addition.

Christian Darrisaw, OT, Virginia Tech (13) — Darrisaw has been falling to the Raiders in many mock drafts, a scenario that might be ideal for a team in need of a starting tackle. Here he is lost to a division rival.

Micah Parsons, LB, Penn State (14) — He is quite possibly the best defensive prospect in the draft and should go somewhere in the first round despite concerns about off-field transgressions.

Mac Jones, QB, Alabama (15) – Bill Belichick isn’t the type to squander a bunch of assets to move up to select one of the top quarterbacks in this draft, but he’s not likely to pass on one who falls to him.

Jaycee Horn, CB, South Carolina (16) — Arizona would be happy with either Horn or Surtain. So with Surtain off the board, the choice becomes fairly easy.

Trevon Moehrig, S, TCU (25) — With the top three offensive linemen off the board, this might be an obvious spot to trade down and take a potential starting right tackle while acquiring additional draft capital. But Moehrig is the only true first-round talent at the position and would give the Raiders an entire secondary picked in early rounds in the last three years. The signing of Karl Joseph gives the Raiders a veteran presence at safety, but shouldn’t preclude them from adding talent at safety.

Kwity Paye, Edge, Michigan (11) — It would be tough for the Dolphins to pass on the guy who has been projected as the top edge rusher should he actually fall to them. He fills a need as a 3-down edge with pass rushing ability.

Jeremiah Owusu-Koramoah, ILB, Notre Dame (29) — If there was a weak link on Washington’s defense last year, it was at the second level. They address that here by taking a player who excels against the pass and can also play safety in some packages.

Caleb Farley, CB, Virginia Tech (19) — Some team is going to take a chance on Farley, who would be in the conversation to be picked in the top 10 were it not for some medical red flags that include a recent back surgery. High-risk, high-reward potential for the Bears.

Jayson Oweh, Edge, Penn State (18) — The Colts address a glaring need on defense by taking a player whose measurables are off the chart.

Rashod Bateman, WR, Minnesota (22) — This could be a tough call for the Titans, who could think seriously about taking Christian Barmore should this scenario unfold. They opt for a playmaker who could help replace Corey Davis.

Gregory Rousseau, Edge, Miami (21) — The Rousseau hype seems to have lost a bit of momentum, but he’s still a talented player who can get to the quarterback and play inside on occasion. This may not be the Jets’ biggest need, though what they really need is an influx of talented players.

Alijah Vera-Tucker, OL, USC (24) — There’s not much consensus on the rankings of the offensive tackles after the top three. Vera-Tucker gets the nod here. Many Pittsburgh fans seem to be hoping for a running back, but the best way to fix the running game is by building the offensive line.

Teven Jenkins, OT, Oklahoma State (17) — Jacksonville coach Urban Meyer got his quarterback at the top of the draft and now gets someone to protect him. It will be tempting to go with a defensive selection, but solidifying the offensive line needs to be prioritized.

Jaelan Phillips, Edge, Miami (26) — Phillips will be another interesting story on draft night. He has dealt with concussion issues that forced him to briefly stop playing football in college, yet possesses immense talent and athleticism.

Kadarius Toney, WR, Florida (27) — Toney is a hot name as the draft approaches and would be a perfect fit for a Ravens offense desperate for a playmaking receiver. He is electric with the ball in his hands.

Asante Samuel Jr., CB, Florida State (28) — While the Saints’ list of needs after a purge to get salary cap compliant is long, cornerback is near the top. Samuel is starting to gain momentum as a late-first round pick after spending much of the last few months with a second-round projection.

Christian Barmore, DT, Alabama (20) — A disruptive force who wreaked havoc on offensive lines in the postseason for the Crimson Tide, Barmore is the only projected first rounder among interior defensive linemen.

*-Greg Newsome, CB, Northwestern — One of the fastest risers of the last few weeks, Newsome has worked his way into first-round discussion. The Bills are searching for a complementary cornerback to pair with superstar Tre’Davious White.

*-Dillon Radunz, OT, North Dakota State — Anybody who has a question about the ability of Radunz to match up against elite talent just needs to take a look at his performance in the Senior Bowl practices. Radunz will be just fine at the next level, and the Chiefs are in need of an offensive tackle.

*-Elijah Moore, WR, Mississippi — The Bucs are in rare position of being a Super Bowl champion that returns its entire starting lineup, so there are few holes on the roster. Antonio Brown is still unsigned, however, and Chris Godwin may enter free agency next offseason.