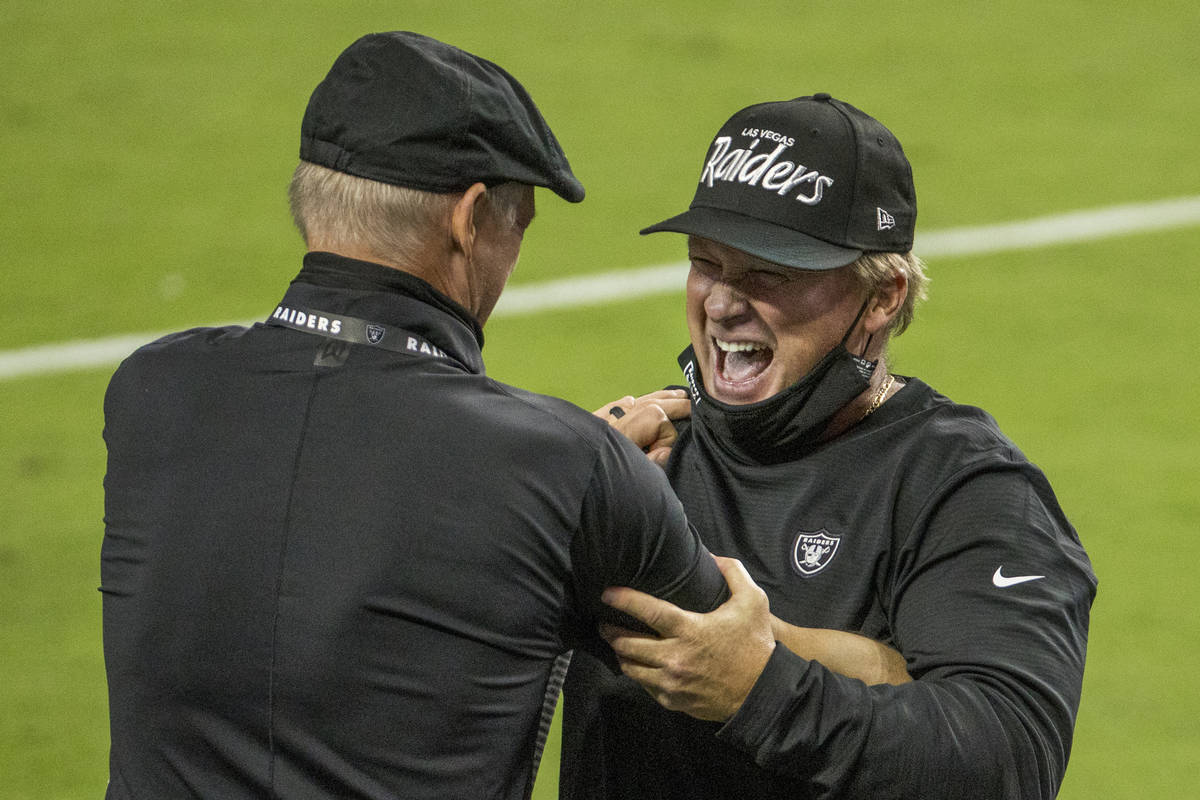 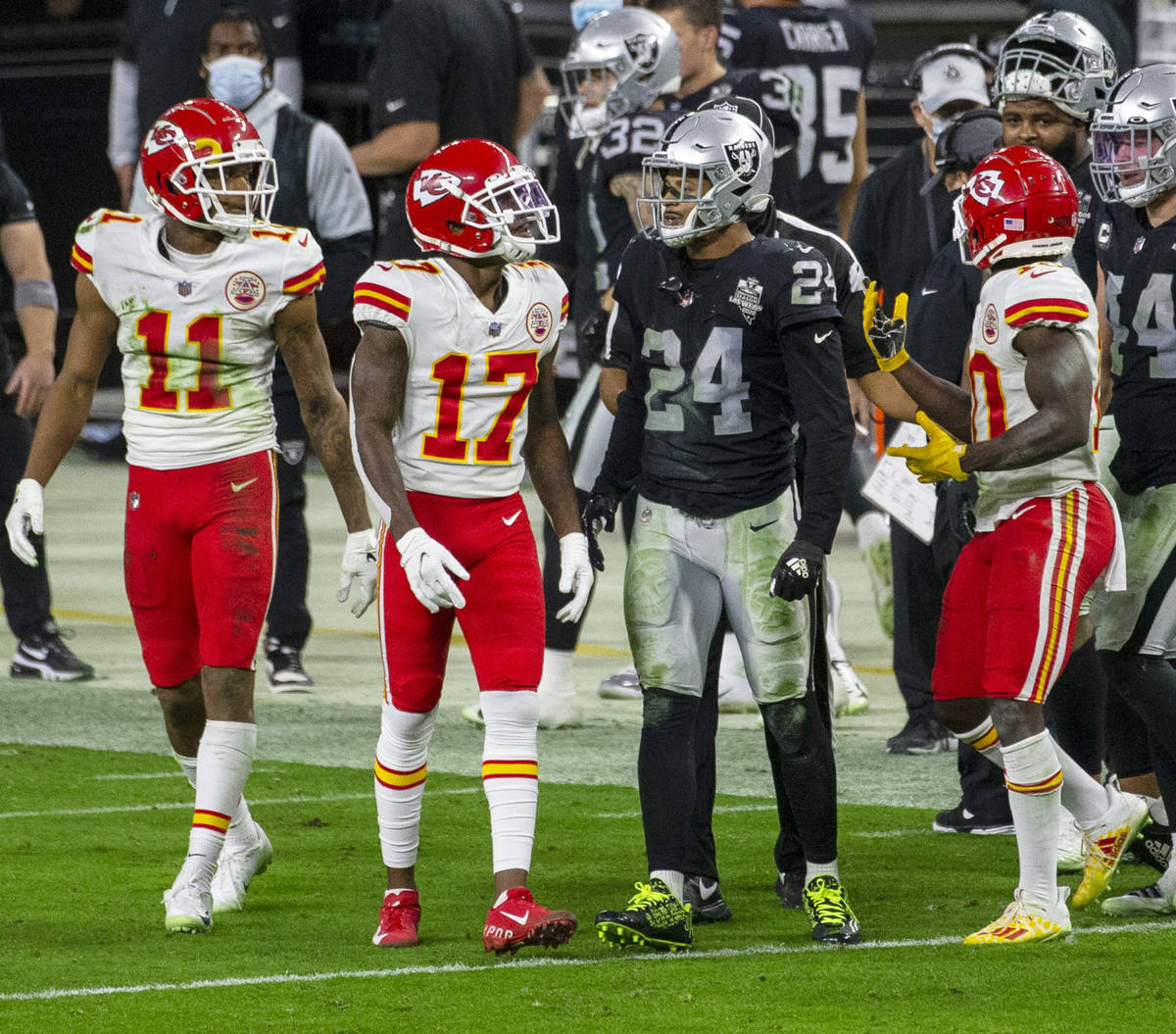 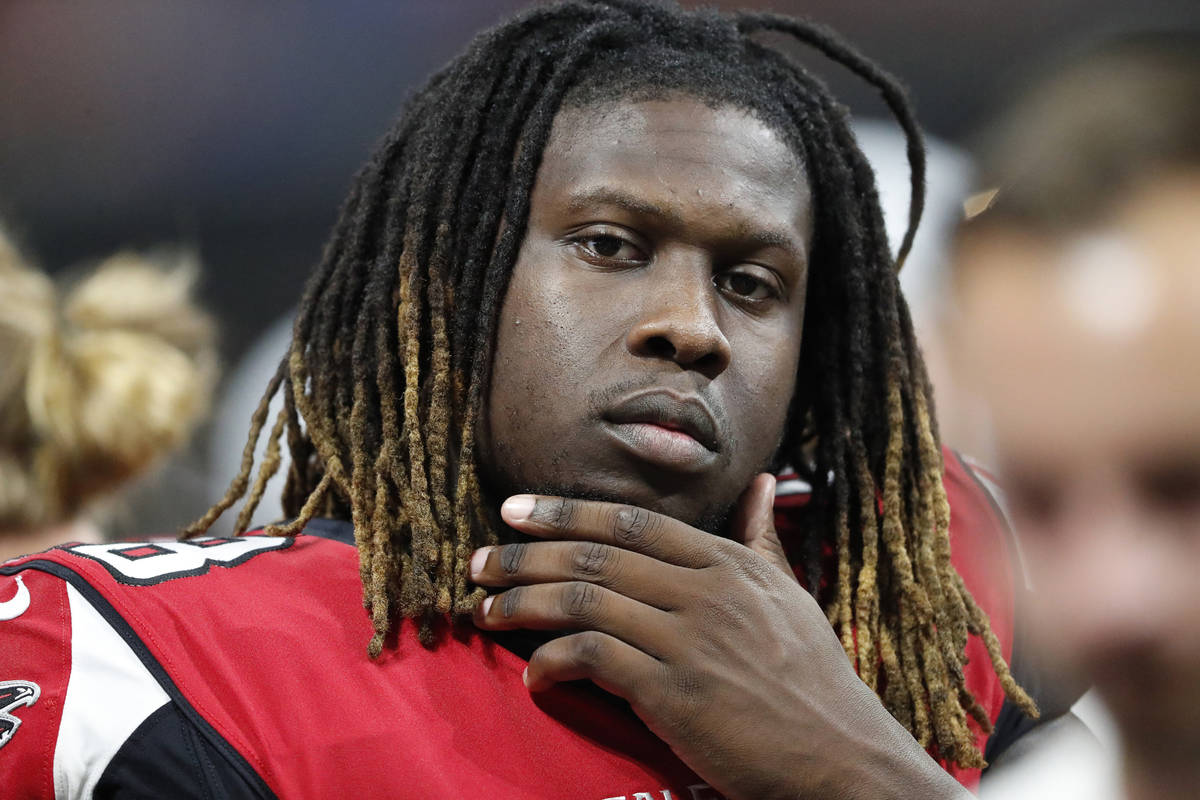 FILE - In this Aug. 17, 2018, file photo, Atlanta Falcons defensive end Takk McKinley (98) sits on the bench during the second half of an NFL preseason football game against the Kansas City Chiefs, in Atlanta. Defensive end Takk McKinley may have jeopardized his future with the Falcons by using social media to complain about not being traded. (AP Photo/John Bazemore, File) 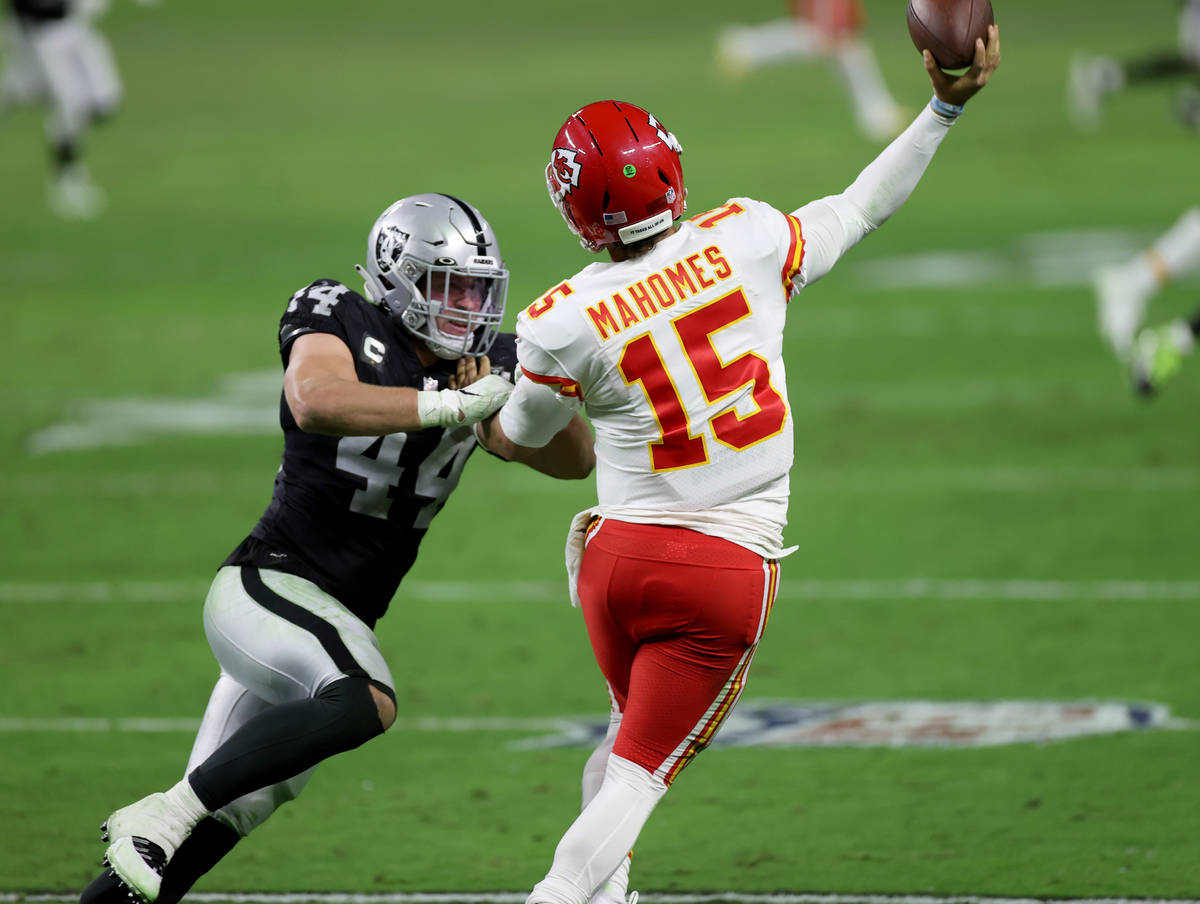 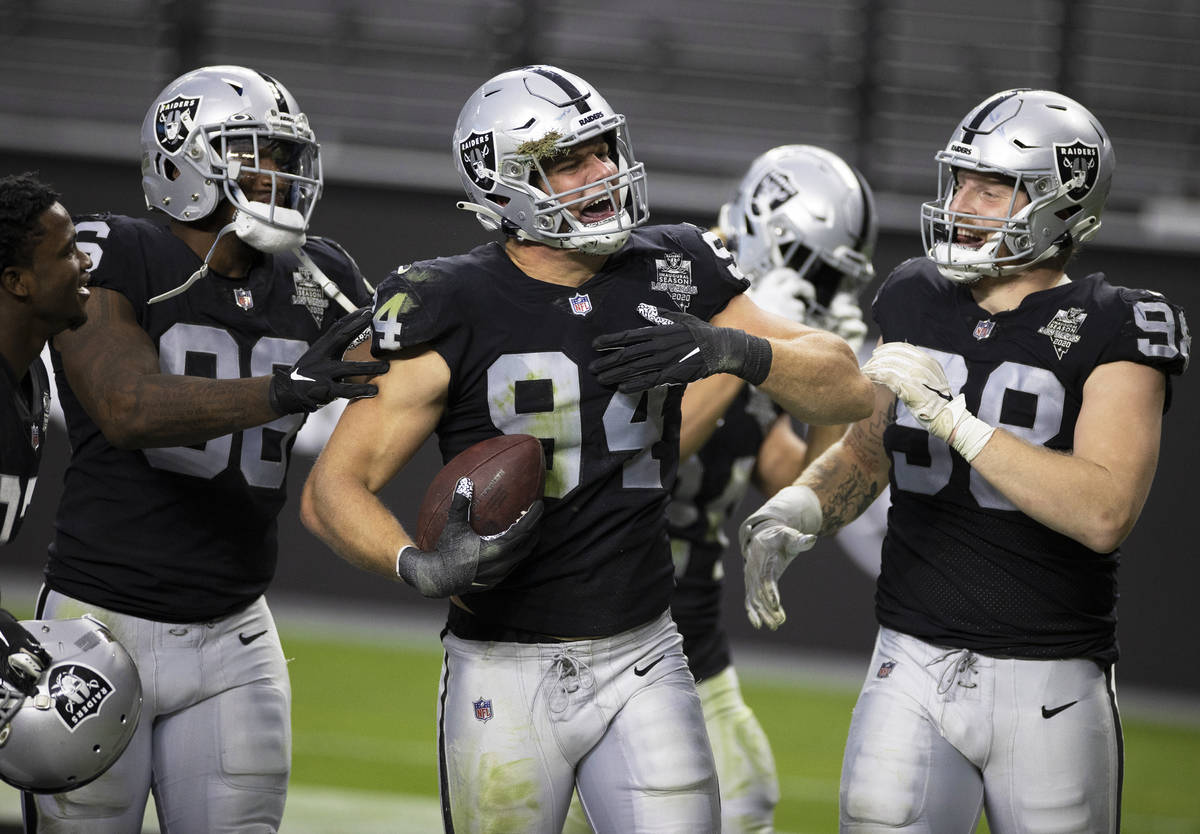 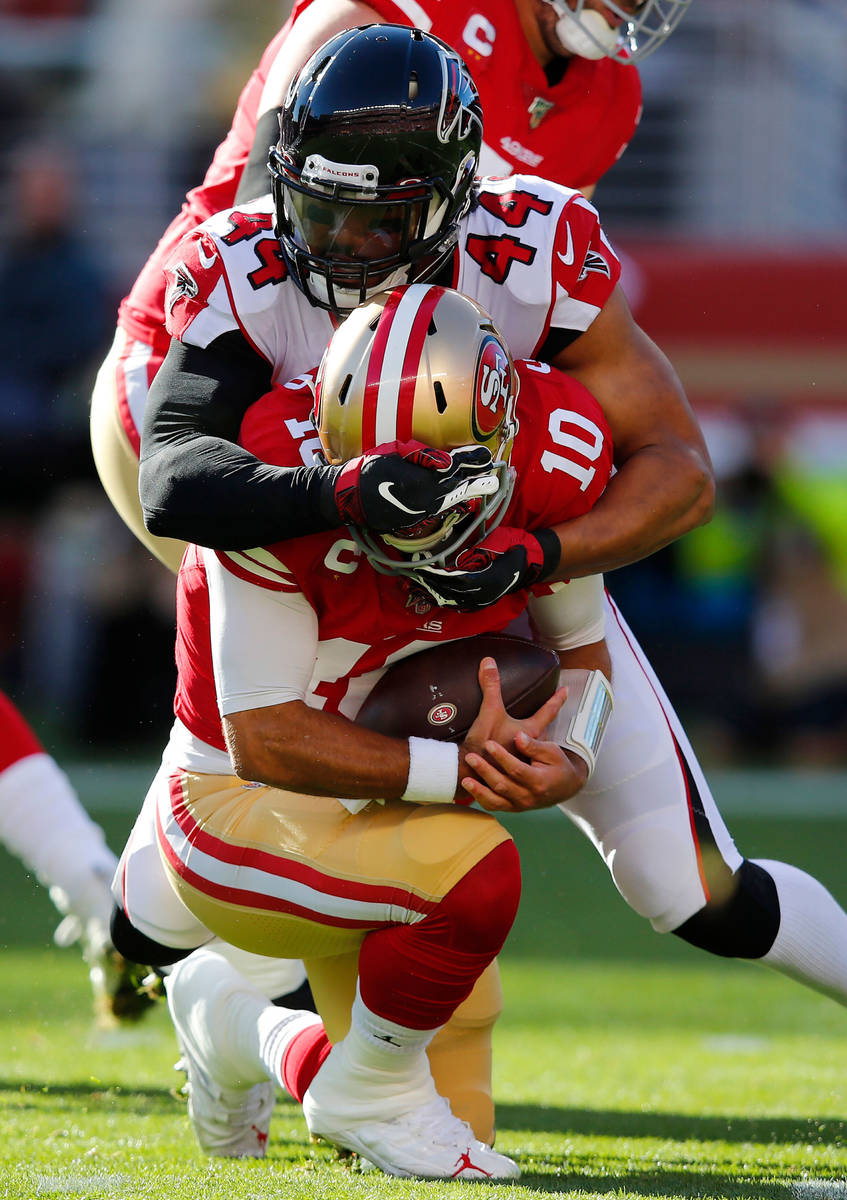 In a last-gasp effort to help their struggling defense, the Raiders signed veteran pass rushers Vic Beasley and Takk McKinley this week. Whether they provide any help remains to be seen.

The late-season additions underscore the Raiders’ inability to generate a consistent pass rush. And the failure to do so has played a harmful role in the Raiders surrendering the seventh-most points per game in the NFL at 27.6.

Getting that squared away could be the difference in the Raiders making the playoffs and doing some damage.

The Raiders’ ascent to the upper echelon of the NFL rests squarely on coach Jon Gruden and general manager Mike Mayock fixing a defense that has been the team’s Achilles’ heel. It will take a combination of young players continuing to improve and personnel upgrades across all three levels of the defense.

Here are three things that must happen between now and next season for the defense to become an asset rather than a liability.

It’s no secret inside the Raiders’ building that they need a big-time pass rusher. To put things in perspective, the Raiders rank 31st in the NFL in sacks with 11, 26th in quarterback hits with 46 and 17th in quarterback pressures with 88. Partially as a result, they are tied for 19th in takeaways with 11 and tied for 14th in interceptions with eight.

While Clelin Ferrell has delivered a strong second season at defensive end after being selected fourth overall in 2019 — Pro Football Focus ranks him the 13th best player at his position with an overall grade of 75.2 — he is 51st overall with a 64.0 pass-rush grade.

Fellow starting defense end Maxx Crosby is ranked 97th among his position group with an overall grade of 52.0, and while he leads the Raiders with six sacks, his 53.3 PFF pass-rush grade is ranked 94th.

It’s incumbent that the Raiders upgrade at Crosby’s spot, which allows him to move into a reserve role as a pass-rush specialist. One name to keep an eye on in free agency: Baltimore Ravens defensive end Yannick Ngakoue, whom the Raiders were connected to as a trade target with the Jacksonville Jaguars during the offseason.

The Raiders also could look to help the pass rush by upgrading the interior of their defense, with an ideal candidate being New York Giants defensive tackle and impending free agent Leonard Williams.

2. Get Abram under control

There is no doubt that second-year safety Johnathan Abram has shown flashes of being an impact player, but far too often he has been a liability in terms of his assignment discipline and penalties.

Abram is ranked 89th — or second worst — among NFL safeties, according to PFF, and his five penalties are the second most at his position. Of those penalties, two are for unnecessary roughness and the other an illegal blindside block, a clear sign that he has trouble toeing the line between aggressive and reckless.

All of it was on prime-time display Sunday against the Kansas City Chiefs. Abram was flagged for unnecessary roughness and, most damaging of all, broke off his coverage assignment when Chiefs quarterback Patrick Mahomes floated out of the pocket to make it look as if he might run and Abram left Travis Kelce wide open in the end zone, where Mahomes hit him for the winning touchdown.

Abram has an obvious skill set, but he plays far too much out of emotion and flawed instincts rather than simply doing the job that is asked of him. The Raiders need to get him to a point in which he relies more on his skill and instructions than his damaging freelance antics.

The Raiders hit a home run with the free agent signing of Nick Kwiatkoski in March. The former Chicago Bears standout has risen to fifth among PFF’s linebacker rankings with an overall grade of 80.6 and looks to be an anchor.

The same can’t be said for Cory Littleton, signed as a free agent from the Los Angeles Rams. He’s ranked 79th among linebackers with a PFF grade of 36.7.

Littleton could be a case of a player struggling to fit in a new scheme after moving from the 3-4 defense he played in Los Angeles to a 4-3. He needs to show significant improvement in the final six games to ease any concerns the Raiders might have that he is a long-term answer.

Nicholas Morrow, the third starter, is ranked 37th with a PFF grade of 56.2. He has shown improvement and could be part of the answer. But the Raiders would be wise to invest draft picks at a position that has been a weakness.