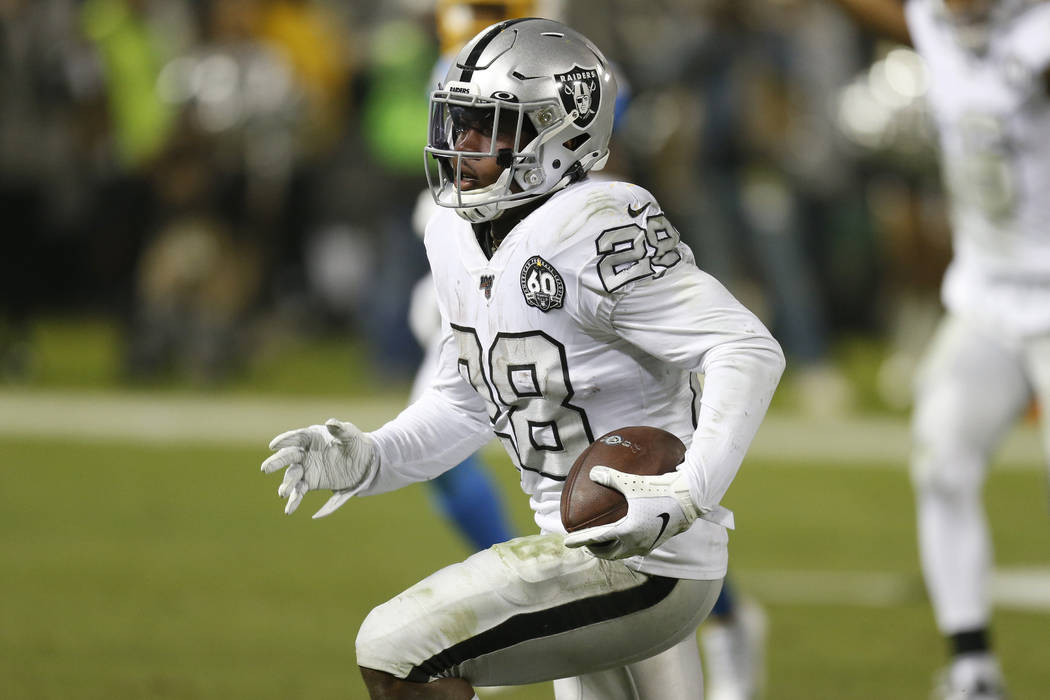 Oakland Raiders running back Josh Jacobs (28) runs toward the end zone to score against the Los Angeles Chargers during the second half of an NFL football game in Oakland, Calif., Thursday, Nov. 7, 2019. (AP Photo/D. Ross Cameron)

ALAMEDA, Calif. — The Bengals are 0-9 and last in run defense. In theory, that might have a player like Raiders rookie running back Josh Jacobs salivating at the prospect of facing them Sunday.

Instead, Jacobs said after Thursday’s practice that he was completely unaware of both the Bengals’ record and their struggles against the run.

Hard as that may be to believe, Jacobs wasn’t the only one on the Raiders who didn’t know those numbers. Jacobs verified this by asking multiple teammates around him in the locker room.

Instead of looking at the numbers, Jacobs has been studying the Bengals’ film. And Jacobs says he can see a solid front, especially over the last few games.

Cincinnati has improved a bit since surrendering a season-high 269 yards rushing to the Baltimore in Week 6 — but only marginally. The Bengals still gave up 216 yards rushing to the Jaguars, 98 to the Rams and 136 last week in their second loss to the division-rival Ravens this season.

Overall, Cincinnati is surrendering 173 yards per game on the ground, and is No. 31 in giving up 5.2 yards per carry. The Bengals have allowed more than 250 yards rushing three times in 2019. And even when they gave up a season-low 66 yards rushing to the Steelers in Week 4, they still lost 27-3.

On the other hand, Oakland enters the Week 11 matchup No. 8 in rushing offense, averaging 130 yards per game on the ground. Jacobs continues to make his case for Offensive Rookie of the Year, currently ranking No. 7 with 811 yards rushing.

So as the Raiders and Bengals get set to play Sunday, this is clearly strength versus weakness.

Still, as offensive coordinator Greg Olson put it, the Raiders are in no position to overlook anybody.

“They have a defensive line that you can take a look at and recognize those names, and you watch them on tape and they’re playing hard,” Olson said. “So I think our guys in no way would say that this is a group that you could overlook, now.”

Generally, Jacobs’ ability to run the ball has improved the Raiders’ offense in many areas — especially third down. As another strength vs. weakness matchup, the Raiders are currently No. 4 in converting 47.7 percent of their third-down opportunities. The Bengals are No. 24, allowing opponents to convert 44.3 percent of the time.

“Every Thursday when we’re out here, we emphasize third downs and the third-down pressures,” Olson said. “They’ve got a lot of confidence in one another — both in terms of the protection part of it and the execution part of it from within the passing game.”

Oakland is averaging 5.5 yards per carry on first down, which is a significant factor in keeping the offense on track. Quarterback Derek Carr said he notices the dividends.

“Third-and-3 in this league is a lot different than third-and-8, that’s for sure,” Carr said. “We give our offensive line and Josh a lot of credit for staying efficient in the run game and in our quick passing game that everyone loves so much.”

“That’s just our mentality — we want to come in and be more physical than the other team. We always want to start the drive fast,” Jacobs said. “It makes our offense easier to call, honestly. And it makes us more dangerous because we can actually get into our playbook a little more.”

Jacobs said he’s feeling fresh after playing last Thursday, with the Raiders getting 10 days between games. But then again, he said he’s felt fresh all season — despite being on pace to take more carries as a rookie than he did his whole collegiate career at Alabama.

“From a body standpoint, I already feel good,” Jacobs said. “But I didn’t know that — that’s a plus, too.”

So Jacobs didn’t know the Bengals stats and he wasn’t aware the Raiders had 10 days between games. But he knows what’s important to him — the Raiders have an opportunity to move to 6-4. And if the expected occurs, Jacobs should have one of his best games of the season.