RJ App
Vegas News, Alerts, ePaper
OPEN
The focus this week for the Raiders is making sure not to over look the win-less Cincinnati Bengals for this Sunday's game. Despite the Bengals record, they do have impressive players. (Le'Andre Fox/Las Vegas Review-Journal)
By Myles Simmons / Las Vegas Review-Journal
November 14, 2019 - 2:36 pm 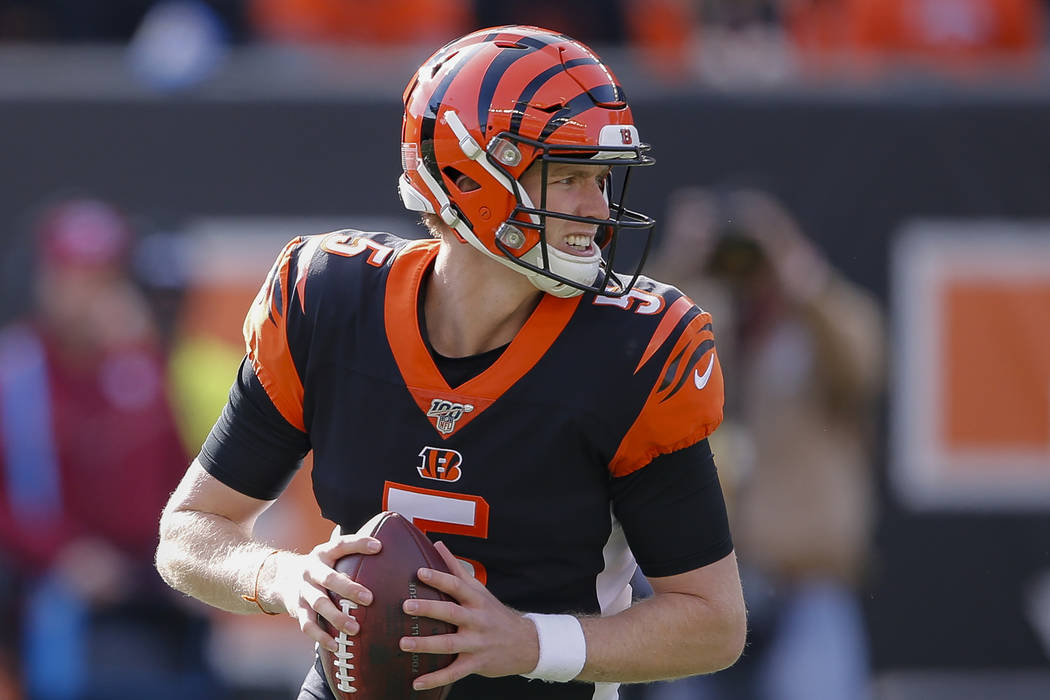 ALAMEDA, Calif. — Rookie quarterback Ryan Finley will make his second start for the winless Bengals on Sunday, and even though there isn’t much film on him, the Raiders do have some familiarity with the young signal-caller.

The Raiders’ coaching staff had Finley on their squad at the Senior Bowl, and coach Jon Gruden said they came away impressed.

“We really liked Finley,” Gruden said. “He’s got some leadership, and he’s got prototype size and he’s a quick learner. So, I’m sure he’s going to be able to handle a lot of football that they give him.”

On a conference call with Raiders media, Bengals coach Zac Taylor said the decision to replace longtime Cincinnati starter Andy Dalton with Finley wasn’t easy. But Taylor made the call during the bye week in order to best evaluate Finley for the rest of the season.

“He played well in the preseason games, and his approach as the backup quarterback had been really good for us.” Taylor said. “So we just wanted to see what he was able to do.”

Finely was 16-for-30 passing in his first start for 167 yards with a touchdown and an interception that Ravens cornerback Marcus Peters returned for a touchdown. Finley also fumbled once during a 49-13 loss to Baltimore.

“He’s made some good throws under duress. He can move around the pocket some,” Guenther said.

Taylor and Raiders offensive coordinator Greg Olson were on the same staff with the Rams in 2017. That year, Olson was the quarterbacks coach and Taylor was the assistant wide receivers coach.

Olson has been the Raiders’ offensive coordinator since 2018. Taylor was the Rams’ quarterbacks coach last year before the Bengals hired him to be their head man.

“He really sets the standard in that quarterback room.” Taylor said of Olson. “I only worked with him for a year, but he’ll be one of my all-time favorites when it’s all said and done.”

The respect goes both ways.

“Great guy. Has tremendous leadership skills, natural communicator,” Olson said of Taylor. “Very intelligent and understood his role in L.A. And very hard worker, so nothing but good things.”

Given that Olson was the offensive coordinator on the Raiders team that started the season 0-10 in 2014, he has empathy for what Taylor is going through with the winless Bengals.

“It’s never easy, no matter if you’re a young coach in the league or a veteran coach in the league,” Olson said. “It’s every week — it’s more above-the-neck work with the players to keep their minds in it and let them know there’s something better coming at the end.”

The Raiders have fewer injury concerns than many teams at this point in the season, but slot cornerback Lamarcus Joyner (hamstring) remained sidelined and did not practice Thursday. Backup offensive tackle David Sharpe, who was limited on Wednesday with a calf injury, was the only other player who did not practice.