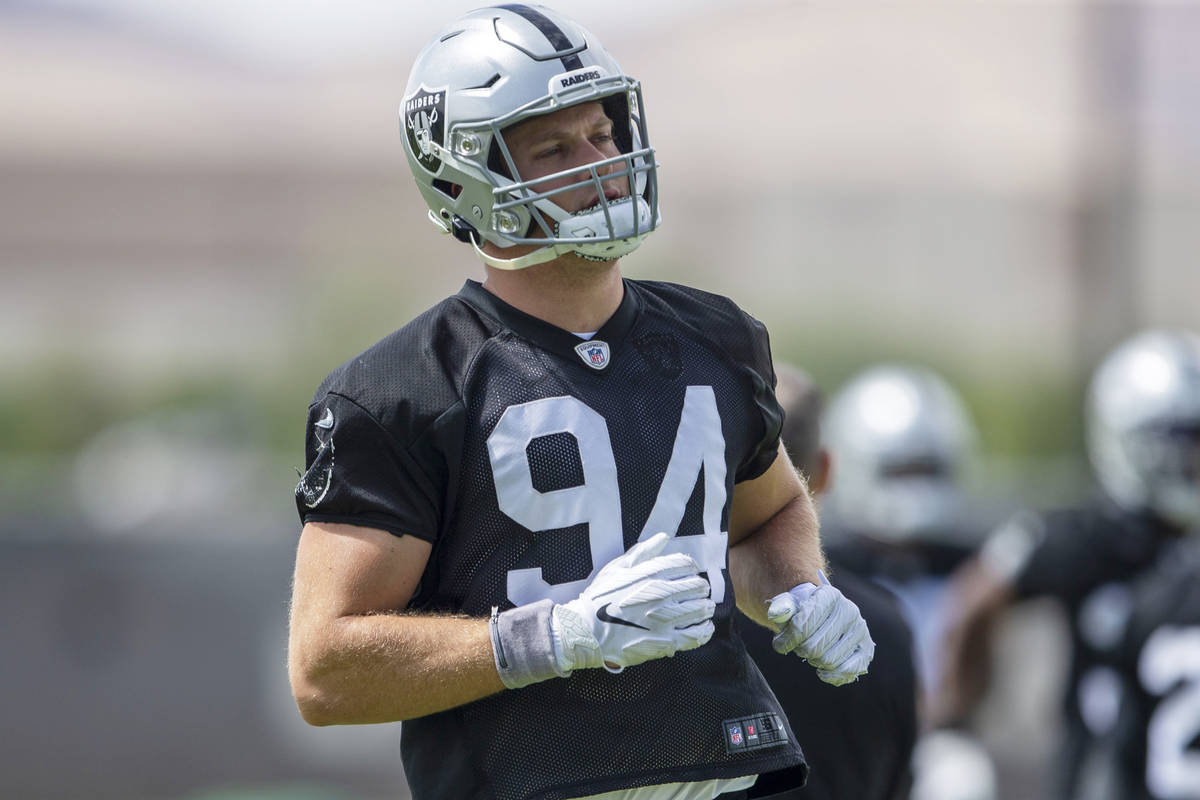 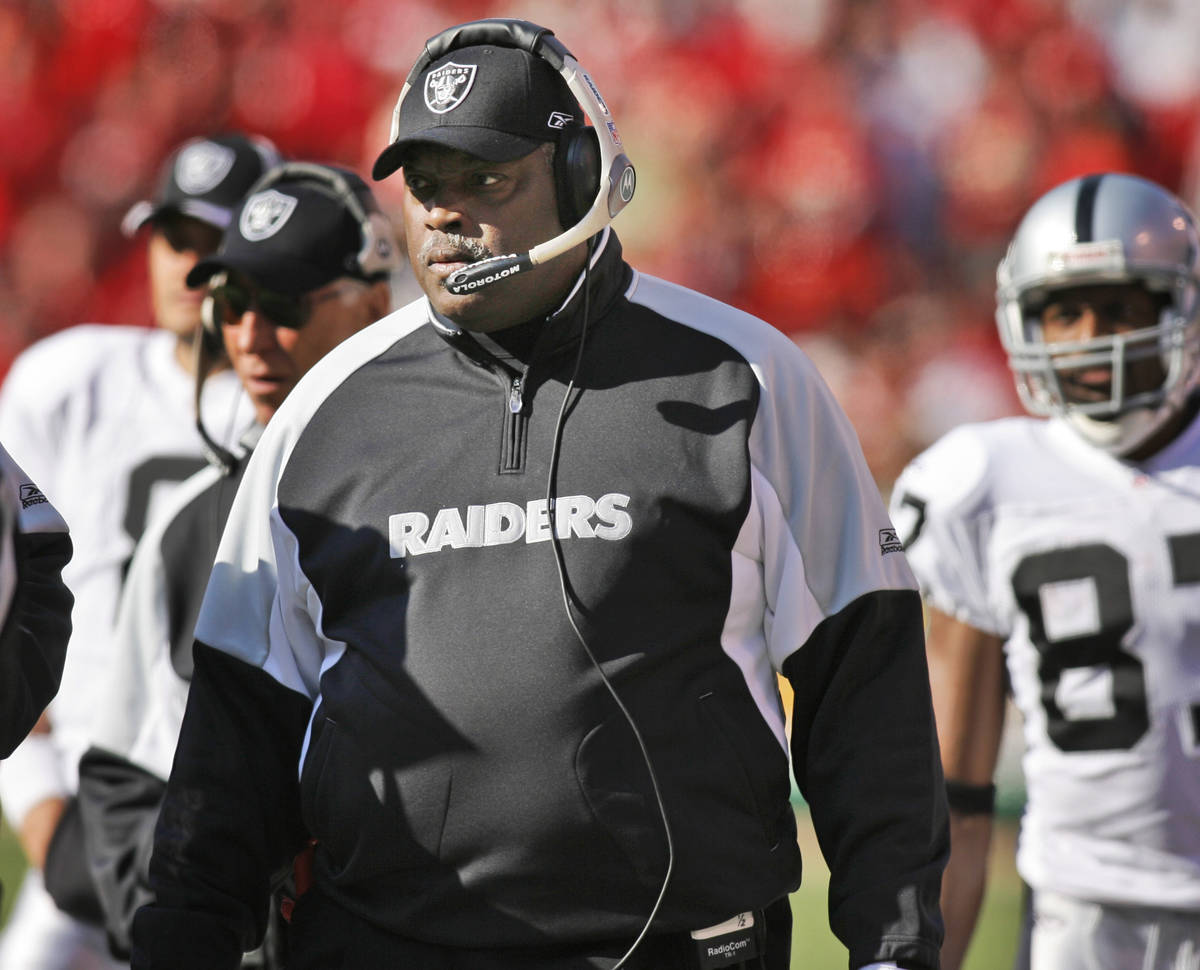 In this Nov. 19, 2006, file photo, Oakland Raiders coach Art Shell works the sidelines during the team's NFL football game against the Kansas City Chiefs in Kansas City, Mo. Shell was let go by the Raiders following the 1994 season as late owner Al Davis wanted a fresh start for the team for its move back to Oakland. Davis later said he regretted the move and brought Shell back in 2006. Shell had spent his first six years away from the Raiders as an assistant coach but had been out of the profession entirely for five seasons when Davis hired him a second time. (AP Photo/Ed Zurga, File) 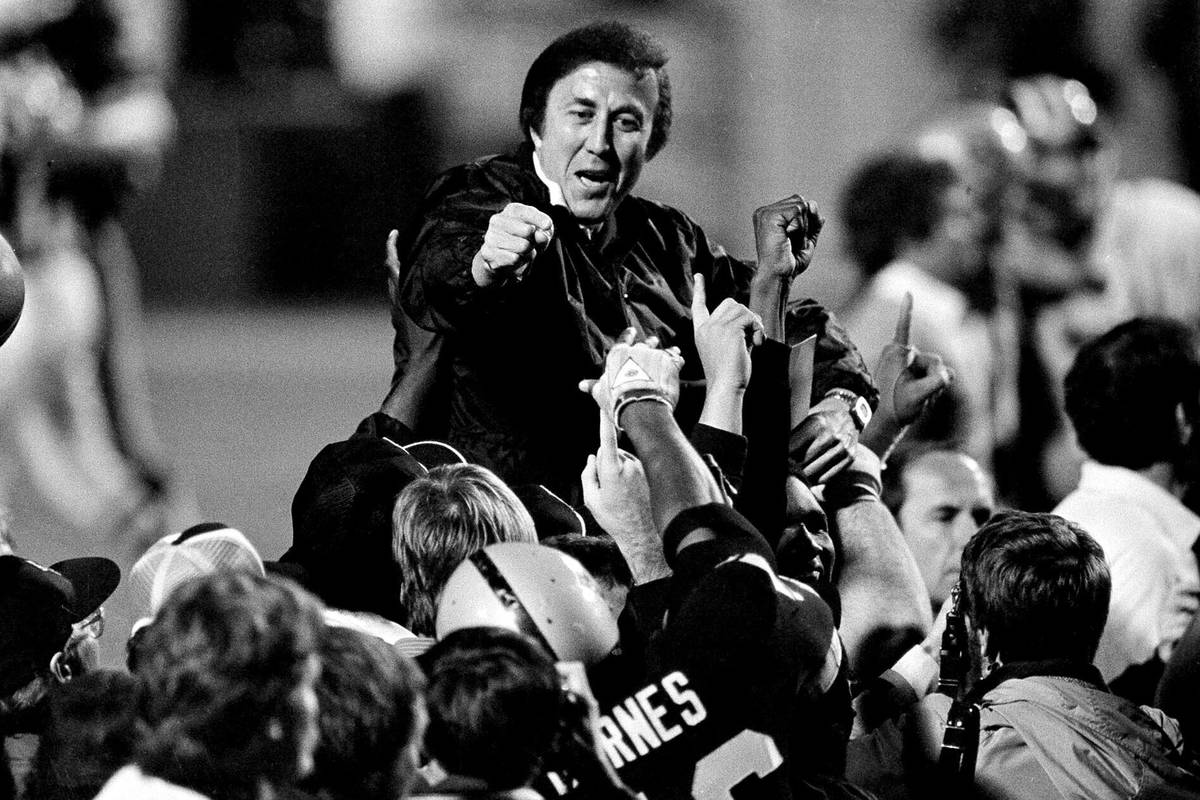 In this Jan. 23, 1984, file photo, coach Tom Flores gestures to members of the Los Angeles Raiders as they carry him off the field after their 38-9 victory over the Washington Redskins in Super Bowl XVIII in Tampa, Fla. Flores has been selected as the Coach Finalist for the Pro Football Hall of Fame’s Class of 2021. (AP Photo/File) 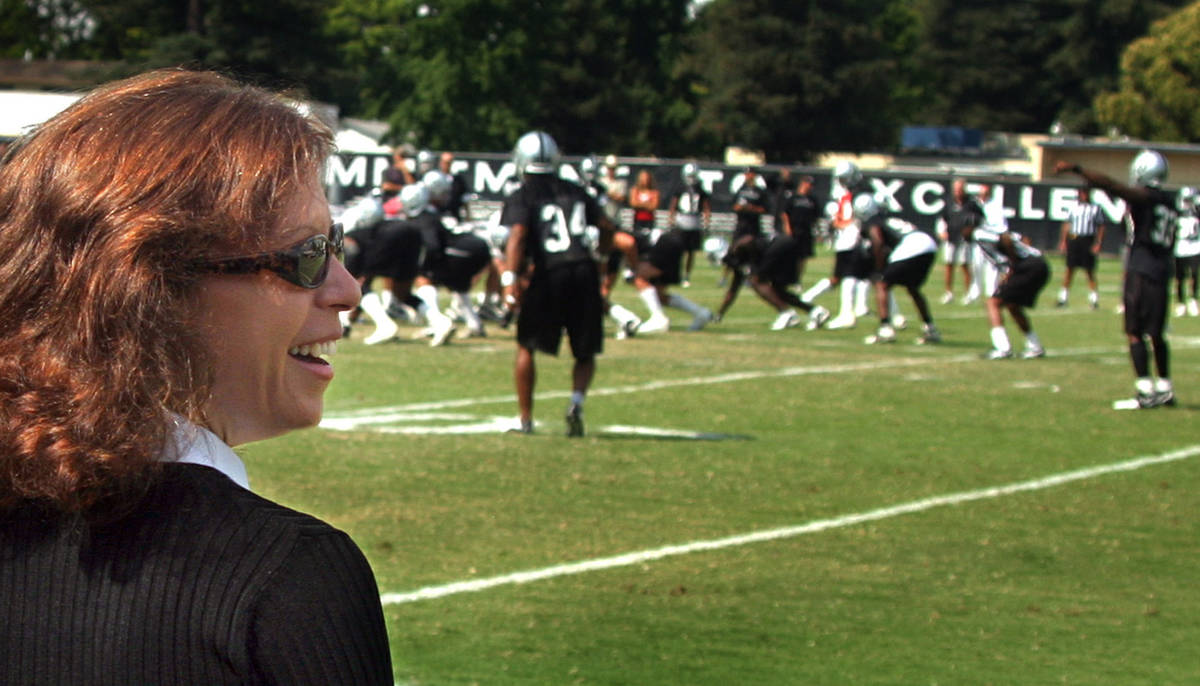 Amy Trask, Chief Executive of the Oakland Raiders, watches the team and talks with fans and company officials at their summer training camp in Napa, Calif., Thursday, July 31, 2003. The Raiders' chief executive and the most influential woman in the NFL, has been a football junkie since junior high. (AP Photo/Dino Vournas)

Upon hearing Carl Nassib come out as the first active gay player in the NFL, Art Shell immediately thought about how appropriate it was that a member of the Raiders broke down that barrier.

Thirty-two years ago, in 1989, Shell became the first African-American head coach in the NFL when the late Al Davis hired him to lead the Raiders.

Davis’ groundbreaking decision is one of many examples of the Raiders’ forward thinking and actions that have promoted tolerance and inclusiveness.

“That’s how Mr. Davis wanted his team to be,” Shell said. “There was no trouble with racism or things like that. He would nip that in the bud real quick if he thought there was someone like that on his team. That player would not be there for long.”

In 1968, Eldridge Dickey became the first African-American quarterback to be selected in the first round of a professional football draft when the Raiders selected him 25th in the AFL draft.

In 1979, the Raiders hired Tom Flores as the first Latino head coach in NFL history, and the future Hall of Famer would lead the Raiders to victories in Super Bowl XV and XVIII.

And in 1997, Amy Trask became the first female CEO of an NFL franchise when Davis appointed her to that position.

Mark Davis, who took over the Raiders upon his father’s death in 2011, has built on that progressive legacy.

Next door to the Raiders’ headquarters in Henderson, Davis is building the Al Davis/Eddie Robinson Leadership Academy to help prepare minority candidates for leadership positions in the NFL and sports in general.

“The organization has always sort of been built on a progressive mentality,” said Raiders president Marc Badain. “Mr. Davis started that when he was with the team and some of the things he did with throughout the years in the 60s and 70s. And Mark has really continued that.”

Coupled with their longstanding policy of extending second chances to players and providing the necessary room for non-conformists to simply be themselves, the inclusive safe haven the Raiders have created over the years is in contrast to the rough and tumble persona they embrace.

Shell believes the inclusive nature of the Raiders likely eased any concerns Nassib might have had in making his announcement.

The hiring of Flores

While most fans remember Flores as the Raiders’ head coach from 1979 to 1987, his roots with the organization go all the way back to 1960 when the Raiders offered him a chance to compete for a roster spot. Flores, a native of California’s San Joaquin Valley and a standout at the University of Pacific in Stockton, played six years with the Raiders and threw for 11,635 yards and 92 touchdowns.

He would eventually go on to play for the Buffalo Bills and Kansas City Chiefs. Upon retiring he took a job in 1971 as the Bills quarterbacks coach. A year later, Raiders head coach John Madden hired Flores to be the Raiders’ wide receivers coach, a post he held for seven years.

When Madden retired in 1978, Flores desperately wanted to replace him.

“Tom and I used to talk when Tom was an assistant, and he wanted to become a head coach in the league,” said Shell, who played for the Raiders from 1968 to 1982

But so did five other candidates. What ensued was a taxing process in which Davis interviewed Flores five times for the position.

“He just put me through the ringer and made sure how I would respond,” Flores told the Fresno Bee. “It wasn’t about the game. I think it was a matter if he felt I was strong enough to handle the job.”

Davis eventually hired Flores to be the seventh coach in franchise history. After going 9-7 in his first year at the help, Flores and the Raiders turned what was supposed to be a rebuilding year in 1980 into a Super Bowl championship. Three years later, with the team now in Los Angeles, the Raiders won Super Bowl XVIII.

“His time came, he took the mantle and he ran with it,” Shell said. “So that was great.”

Shell had been a member of the Raiders as a player and assistant coach for 21 years before Davis turned to the Hall of Fame offensive linemen in 1989 to take over as the team’s head coach.

The Raiders were floundering at 1-3 at the time and had just dismissed Mike Shanahan after one-plus years at the helm. Shell, the Raiders’ offensive line coach the previous six seasons, understood the significance of being the first African-American head coach in league history.

“I thought about that, certainly,” Shell said. “It was a great honor for me.”

While the groundbreaking nature of his hire meant everyone was paying close attention, Shell had to focus on getting the team turned around.

The Raiders went 4-1 over Shell’s first five games and eventually finished the season with an 8-8 record. A season later they went 12-4 and advanced to the AFC championship game.

Shell was fired by the Raiders in 1994 after leading the Raiders to a 9-7 record. He returned as their head coach in 2006, but was let go after the Raiders finished 2-14.

In seven seasons under Shell, the Raiders went 56-52 and advanced to three postseasons.

As a graduate student at Cal-Berkeley in the early 1980s, Trask lobbed a cold call to the Raiders inquiring about an internship. The fortuitous phone call eventually led to a 30-year relationship in which Trask rose from intern to a key member of the club’s legal department to becoming the first female to run an organization in NFL history.

During her time as CEO from 1997 to 2013, she was considered a tough, hard-nosed leader that in many ways embodied her boss Al Davis.

“From the day I began my internship with the Raiders in the mid ’80s, I comported myself without regard to gender and I believe that Al evaluated me without regard to gender,” she wrote in Sports Illustrated. “He certainly swore at me, yelled at me and treated me as he did my male colleagues, which is precisely what one should hope.”

As for the precedent Davis continually set in his hiring practices, it was frustrating that they were not more commonplace.

“Al did not consider his practices to be remarkable,” Trask wrote. “He believed they should be the norm and was somewhat dismayed that they were not.”

The Raiders selected Tennessee State’s Eldridge Dickey with the 25th pick in the AFL draft in 1968, making him the first African-American quarterback selected in the first round of a professional football draft.

A three-time HBCU All-American and the leader of Tennessee State’s undefeated 1966 team that won the National Black College Football Championship, Dickey was a spectacular player according to those who saw him play. He also caught the eye of Al Davis, who scouted Dickey through his college career.

But the Raiders not only had star quarterback Daryle Lamonica on the roster, they also selected Alabama quarterback Kenny Stabler in the same draft as Dickey. As a result, they moved Dickey to wide receiver during his first training camp.

Dickey never quite took to the change and ended up playing just two seasons with the Raiders, catching five passes.