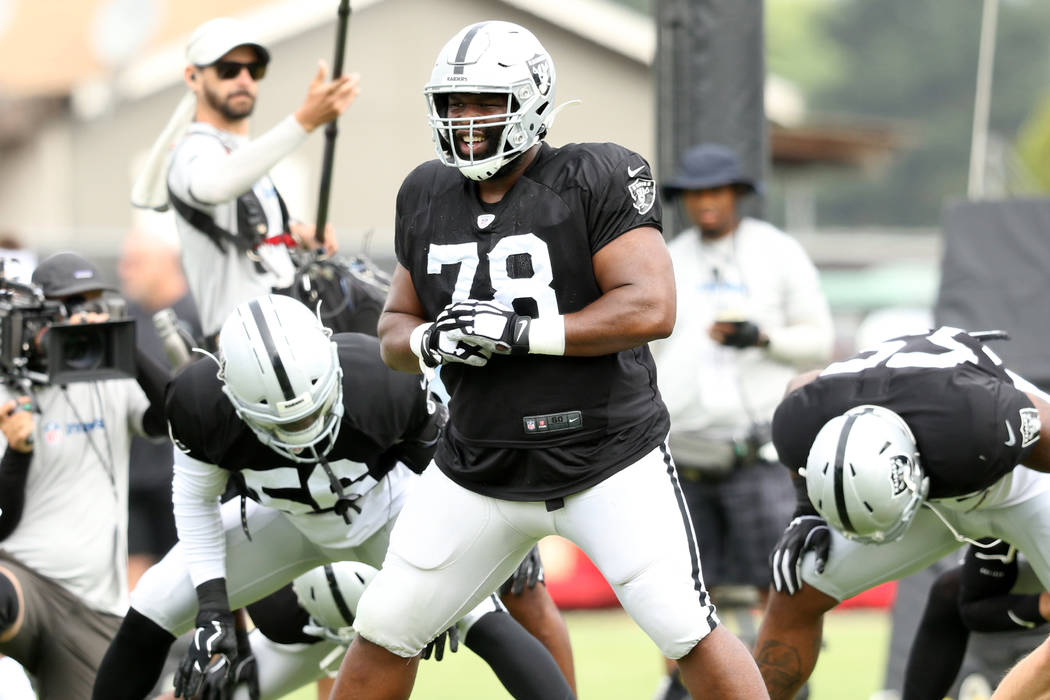 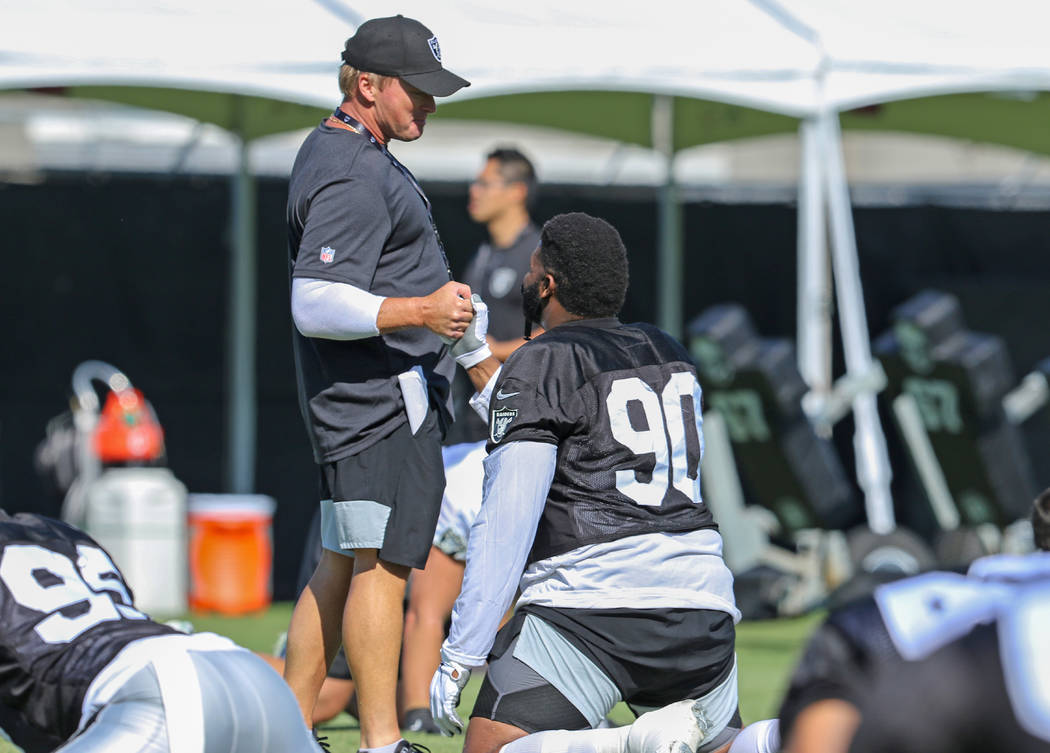 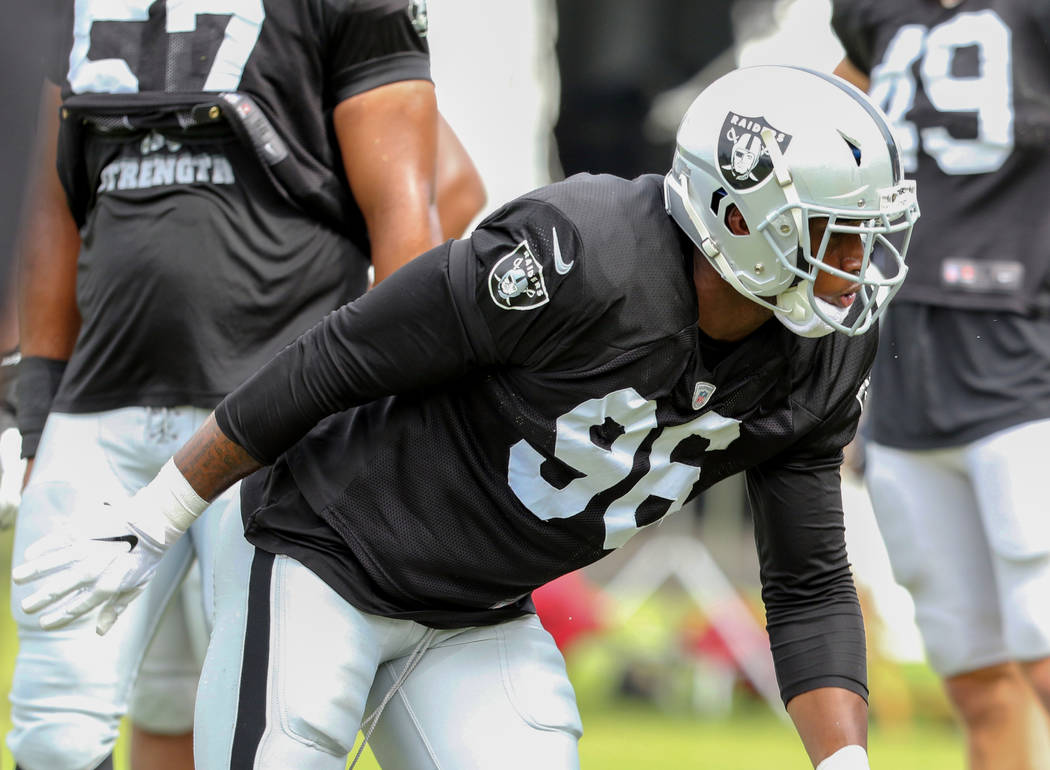 NAPA, Calif. — Johnathan Hankins is a 320-pound defensive tackle with 12 sacks in 82 career games. Justin Ellis is a 330-pound nose tackle with half a sack in 66. At defensive end, the Raiders could start Josh Mauro on the left side and rookie Clelin Ferrell on the right in their base defense.

None of these four is considered a premier NFL pass rusher.

All could help the Raiders create pressure just the same.

Last season, 31 of 32 teams recorded 30 or more sacks. The Raiders were the exception at 13. A number of factors contributed to this issue beyond the pass-rush ability level of those on the roster following the trade of Khalil Mack. That included the club’s run defense.

The Raiders allowed 140.6 rushing yards per game, third worst in the NFL.

To defend the interior, Hankins and Ellis are in better physical shape today than last season. Mauro’s and Ferrell’s arrivals represent upgrades, too, when setting the edge against the run. The latter two’s presence should free those such as defensive end Arden Key, who played about double the number of defensive snaps that coaches planned for in 2018, to focus on being a situational pass rusher.

“We’re trying to be better football players,” defensive line coach Brentson Buckner said. “I’m not going into, ‘Well, the pass rush needs to be this. We’ve got to do this.’ Because if you don’t stop the run, you don’t get a chance to rush the passer. So, we’re working to be better football players, just technique and knowing what to do, trying to be more cerebral about the game than always depending on the physicality of it.”

Of the Raiders’ 13 sacks, six occurred on third down with 5 to 19 yards to the first-down marker. Three others came on second-and-20, first-and-25 and fourth-and-6. Even in a developmental year, there was a theme of early-down success producing pass-rush opportunities.

No one is arguing a stouter run defense magically will rectify the Raiders’ pass rush.

That, of course, would be overly simplistic.

NFL offenses increasingly are electing to pass on early downs, so the Raiders figure to spent substantial time in their nickel defense. Opponents also could elect to pass out of heavier personnel groupings to test the Raiders where they might be vulnerable from their base 4-3 personnel.

Oakland must prove it can create a consistent four-man rush from a base front built more to stop the run. Sam linebacker Tahir Whitehead and Mike linebacker Vontaze Burfict showed need for growth in coverage last season, so offenses could test them. Nickel cornerback Lamarcus Joyner, a March free agency signing who already has established himself as a leader, is off the field in the 4-3 defense.

That said, short-yardage situations are inevitable over the course of a game.

With the Raiders being better equipped to stop the run and get off the field, possession ought to be returned more regularly to what projects to be a high-octane offense. This element of complementary football could amount to more favorable game flow late in games with the Raiders trailing less regularly.

This would help the pass rush.

Last season, opponents rushed on an NFL-high 54.4 percent of second-half play calls against the Raiders, including a league-high 57.1 percent in the fourth quarter. Concordantly, just three of the team’s’ 13 sacks occurred in the second half. Three second-half sacks is the fewest the league has seen since at least 1991.

“Everyone wants to talk about 13 sacks,” Mauro said. “If you don’t stop the run, you don’t get to rush the passer. And if things aren’t going well offensively, special teams and defensively and you’re losing games, you’re not in a position to rush the passer. I think it’s more of a collective effort.”

The Raiders’ pass rush won’t be a finished product in 2019.

An improved run defense may help it move in that direction.