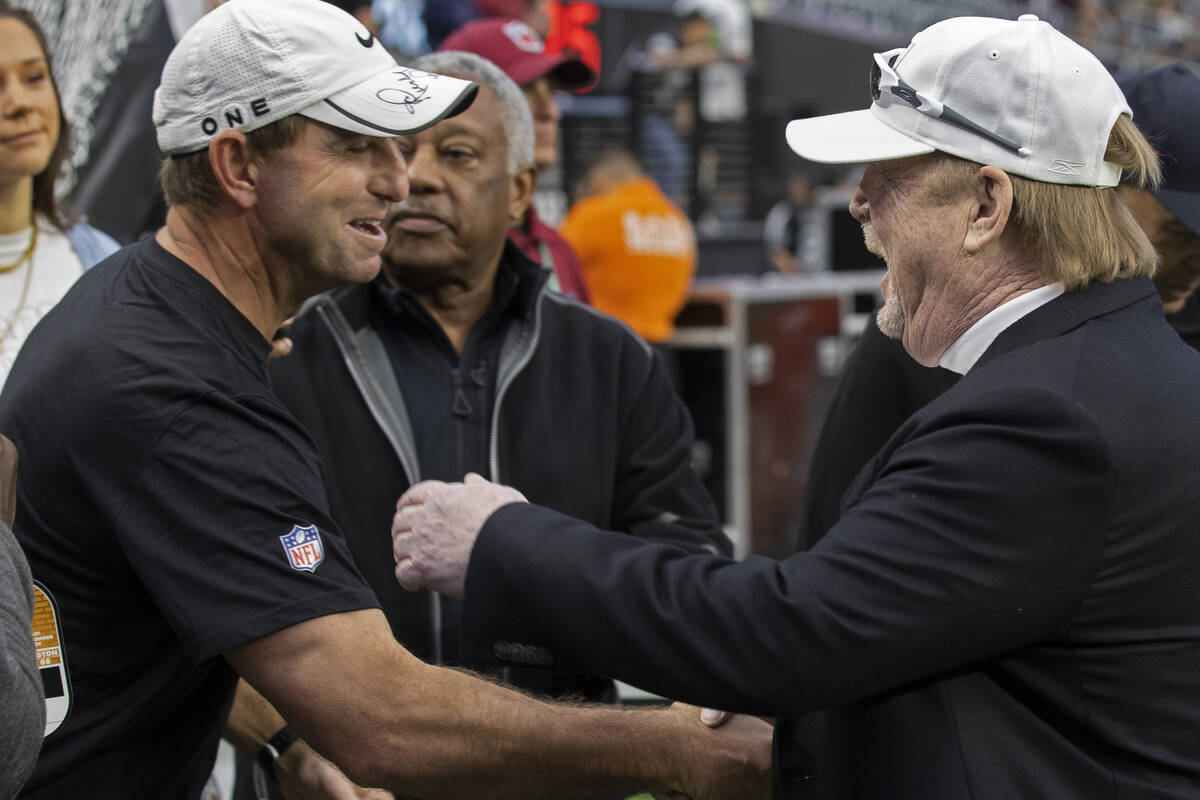 The 6-6 Raiders are still mathematically alive in the AFC playoff race, and they remain committed to chasing down a spot in the postseason over these next five games.

Some of their fans, though, are already peeking ahead to next year.

Some of the questions that arrived in this week’s mailbag reflect those feelings.

RAB II (@Rick209AC): Is Dabo Swinney a potential head coaching candidate for the Raiders in 2022?

Vincent Bonsignore: That seems a bit dubious at this point. But it would not be a surprise, at all, if the Raiders took a big swing for the fences if they go outside their building for a new football leader.

It could be a fascinating offseason.

passionate raider (@flynnies80): If the Raiders lose on Sunday, what’s the plan for the rest of the year? Do they give Nate Peterman a shot to see what we got in him or does Derek Carr still give us our best chance to win?

VB: The Raiders know exactly what they have in Peterman, so it would be a surprise if he got starts down the stretch. Barring an injury, expect Carr to play out the season no matter the record or whether the Raiders are eliminated from the playoffs.

If the Raiders make a change at quarterback during the offseason, it would be a shock if it was to either Peterman or Marcus Mariota.

Antonio Gil (@Predator_48): It’s time to make changes to the offensive line. It’s the last chance to save the season. Why not start with Marus Mariota?

VB: As far as Mariota, if the question is starting him over Carr, it just seems counterproductive to take the Raiders’ best offensive player off the field. Carr isn’t above criticism, but benching him is not the answer.

As far as making offensive line changes, that will have to wait until after the season. Quite frankly, the five players on the field are the Raiders’ best option right now. As long as they still have playoff life, the Raiders have to roll with the best they have.

Tone @kingTone: Considering the lack of inspiration from the offensive play-calling, is Jon Gruden’s playbook completely off the table currently? Or has the change in offensive personnel not allowed the team to be successful, particularly in the red zone?

VB: The Raiders are definitely working out of Gruden’s playbook, save f0r some typical in-season tinkering and additions. It is worth remembering that the red zone issues have been ongoing and pre-dated Gruden’s resignation. It is an area of the field that has been problematic for several seasons.

On the other hand, the inconsistency of the offense can’t be overlooked. The issue are multiple. Not having Gruden around has clearly hurt, as has the release of Henry Ruggs. The failure of the offensive line to come together after a series of changes last offseason also has played a significant role.

The Raiders have the 10th most productive offense in the NFL from a yardage standpoint, and Derek Carr has led the second-best passing unit.

The problem is the Raiders have the 29th-ranked run game, which falls on their offensive line. The inability to consistently run the ball and complement the pass game has contributed significantly to problems in the red zone, in short-yardage situations and in time of possession.

Steve G. (@GladsonSteven): Do you think Gus Bradley will use a cover two defense against Kansas City? The last meeting he stayed in mostly cover three and Kansas City picked apart the Raiders’ secondary.

VB: The big issue in the last meeting was Patrick Mahomes taking what the Raiders gave him by being disciplined and throwing short, underneath passes that allowed his playmakers to do damage after the catch. The Raiders were slow to respond and allowed the Chiefs to chew them up.

The Raiders have to be more aggressive defensively, no matter the scheme, and move to the ball quicker and get Chiefs players to the ground faster. They can’t give up big chunks after the catch.

Plus, they have to get to Mahomes and get him to the ground.