Oklahoma wide receiver Ceedee Lamb confirmed that he has spoken with the Las Vegas Raiders and said he'd give them all he has if he is drafted by them. Alabama wide receiver Jerry Jeudy, who could be drafted by the Raiders at the no. 12 spot, also spoke to media at the 2020 NFL scouting combine on Tuesday. (Heidi Fang/Las Vegas Review-Journal
By Myles Simmons / Las Vegas Review-Journal
February 26, 2020 - 2:29 pm 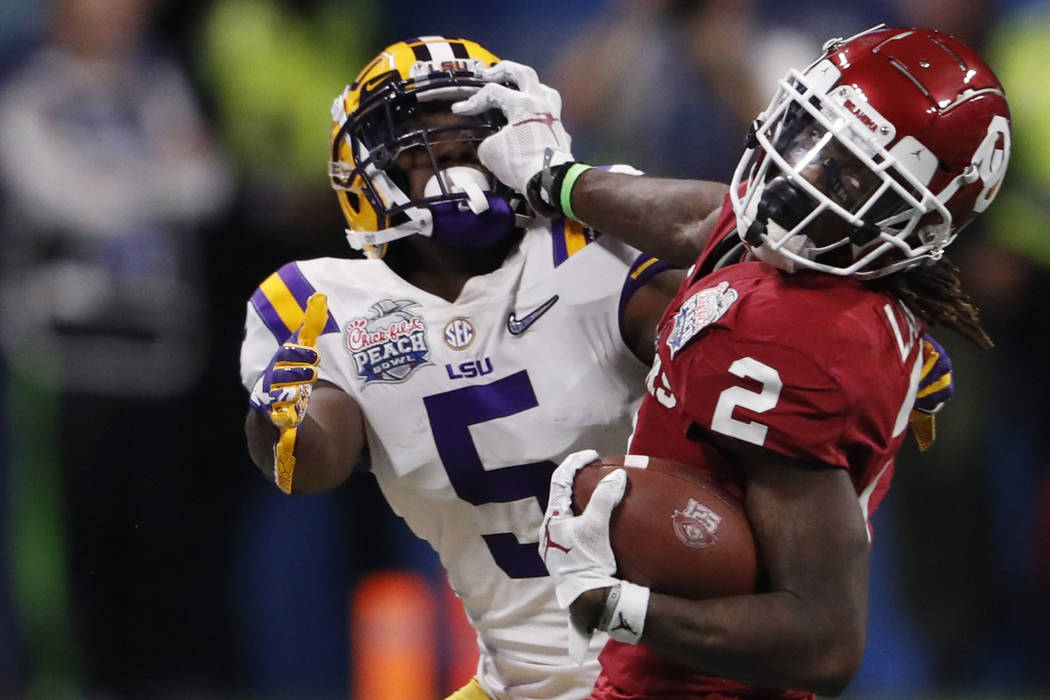 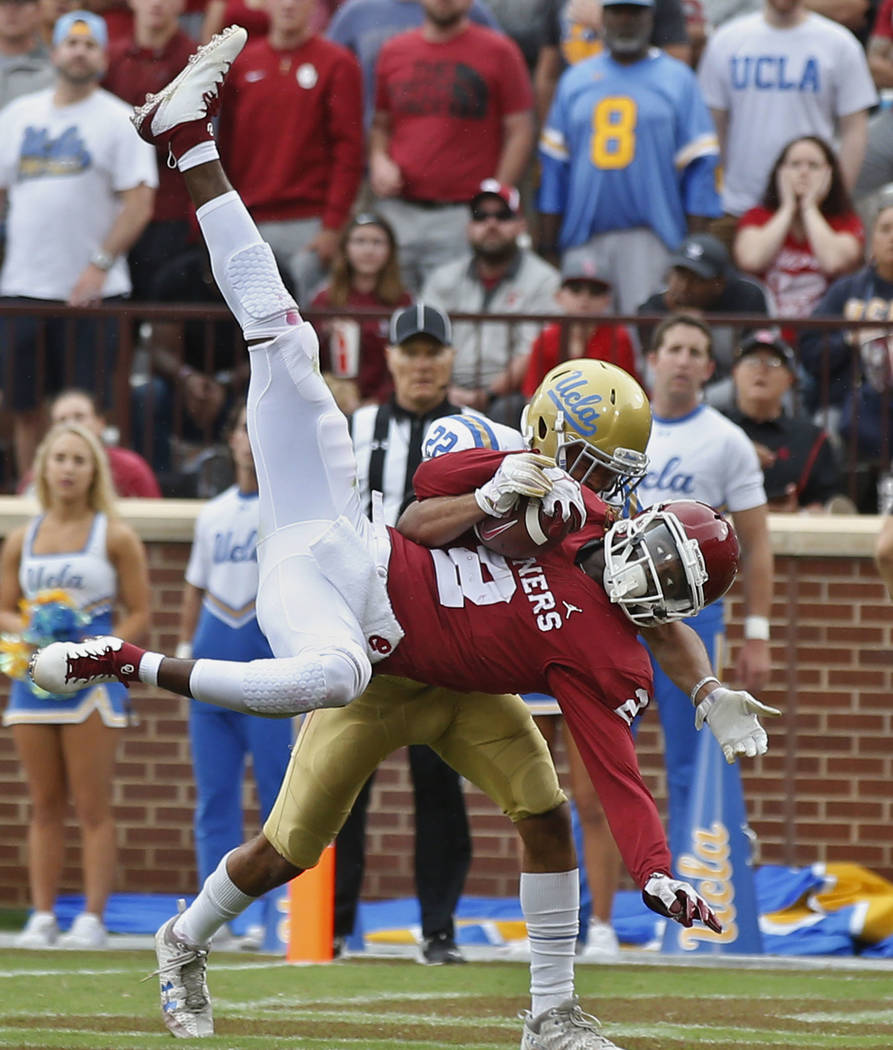 Oklahoma wide receiver CeeDee Lamb (2) comes down with a touchdown pass in front of UCLA defensive back Nate Meadors (22), rear in the second half of an NCAA college football game in Norman, Okla., Saturday, Sept. 8, 2018. Oklahoma won 49-21. (AP Photo/Sue Ogrocki) 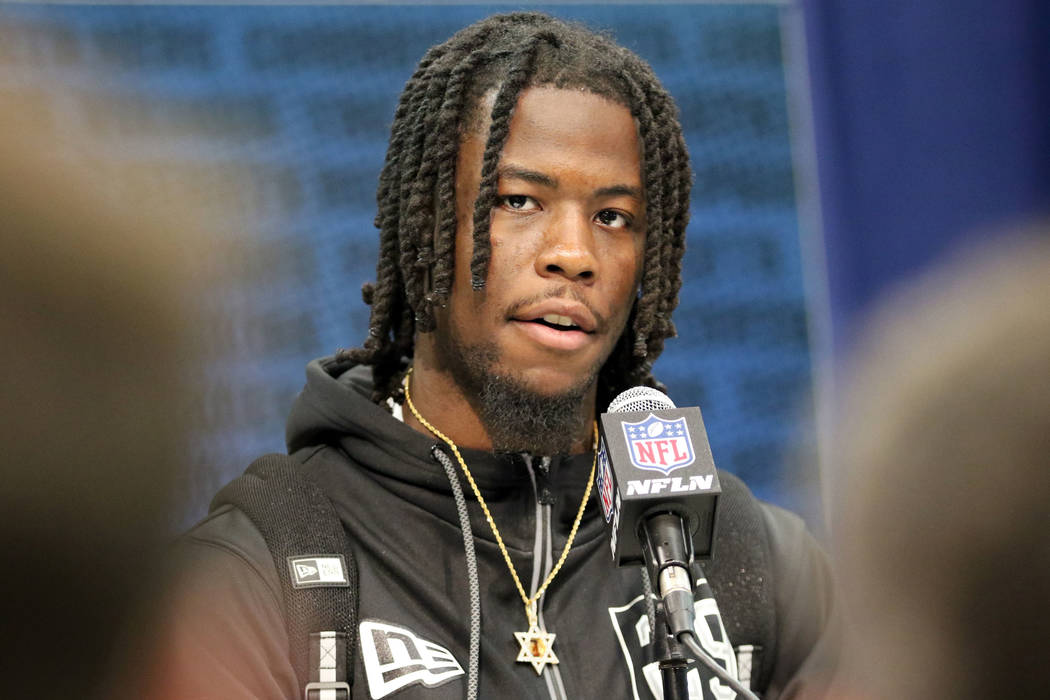 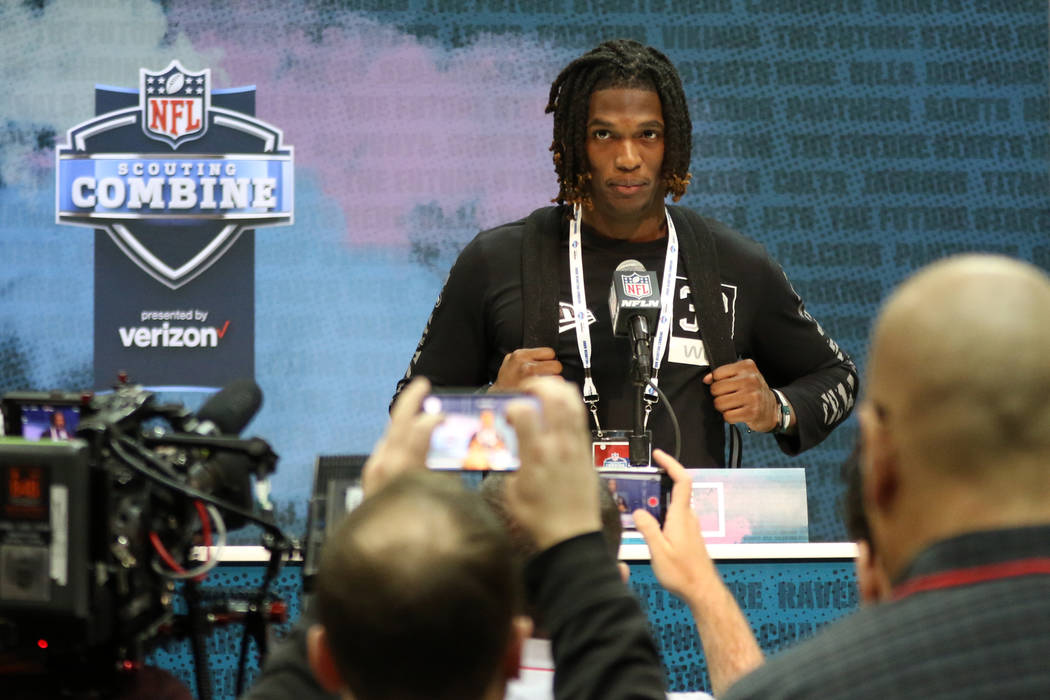 INDIANAPOLIS — During his Tuesday press conference at the NFL scouting combine, Raiders general manager Mike Mayock stated the obvious. “I think everybody standing here knows we need help at wideout,” he said.

Fortunately for the Raiders, the 2020 NFL draft is rich in wide receivers. And with two picks in the first round, No. 12 and 19, they should be able to land one of the top two wideouts, either CeeDee Lamb or Jerry Jeudy.

Lamb checked in at the combine at 6-foot-2 and 198 pounds, and Jeudy at 6-foot-1 and 193 pounds — making both ideally sized to be the kind of No. 1 wide receiver that the Raiders sorely lack on the current roster.

Lamb in particular has thought about what it would be like to play for the Raiders, and he would clearly be in favor of it.

“Just to potentially be playing in the NFL, I’m grateful,” Lamb said. “But playing for the Raiders and coach (Jon) Gruden, it would be a huge honor on my end.”

Lamb said he’s met with the Raiders in Indianapolis and likes the culture Gruden appears to have fostered in and around the organization.

“They’re very young and they’re talented, and they’re trying to get something started that only people in that room and in that locker room know.” Lamb said of the Raiders. “Energy like that is what I love to be around. Jon Gruden’s a great coach.”

Jeudy said that while he didn’t know too much about the Raiders organization, he is interested in learning more about the team.

Lamb noted he feels comfortable running any route and playing any of the wide receiver spots, whether it’s on the inside or outside. Jeudy expressed the same sentiment.

“I don’t really like to compare myself to other players, but I feel like I can do a lot,” Jeudy said. “I can play inside, I can play outside, I can sit in zones and find ways to get open.”

While Mayock wasn’t tipping his hand, he did say one of the most important considerations in drafting a wideout is seeing how quickly the athlete can process information. In many instances in college football, Mayock said, receivers stand and look to the sideline to get a signal from an assistant coach telling them what route to run before each play.

That doesn’t happen in the NFL.

“They’re not used to getting in the huddle, having Derek Carr give them 12 seconds of verbiage, then having to go to the line of scrimmage,” Mayock said.

The key for Mayock then is to figure out how a receiving prospect can decipher a defense and be ready to go from the third option on a play to the primary option depending on the opponent’s scheme.

“Bottom line is, you’ve got to process a lot of stuff you’ve never had to do in your life,” Mayock said. “So whatever program you came out of, you still have to learn it. I think the trick, the challenge, is to figure out which of these kids will be able to process more quickly.”

Mayock also wants to see immediate production out of that spot, which makes the mental makeup of each receiver all the more important in Gruden’s complex offense.

Whether the Raiders elect to select Lamb or Jeudy with a first-round pick, they should have a strong chance to improve their receiving corps in the 2020 draft. Mayock said he agrees with the assessment that this is a strong receiver class, saying he would grade 20 to 25 receivers worthy of being selected in the first to third rounds. On average, only about 12 receivers are taken in the first three rounds of the draft.

“I think the cool thing, if you’re a team in need of wide receivers — and let’s face it, we are — there’s quality at the top and there’s depth throughout,” Mayock said. “And I think that’s what you’re looking for.”