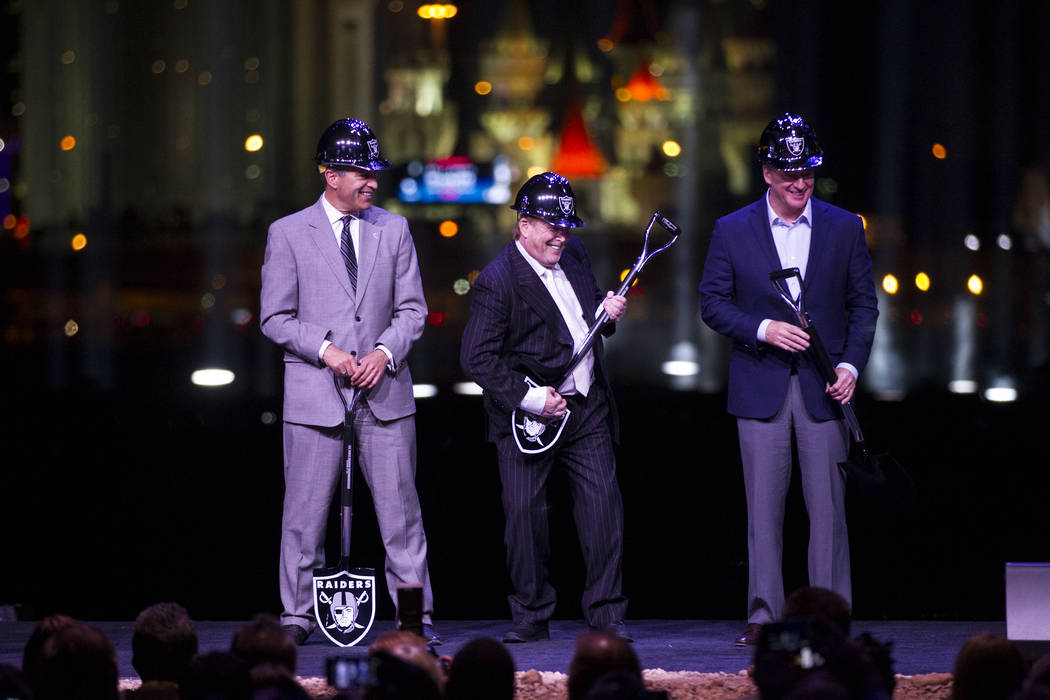 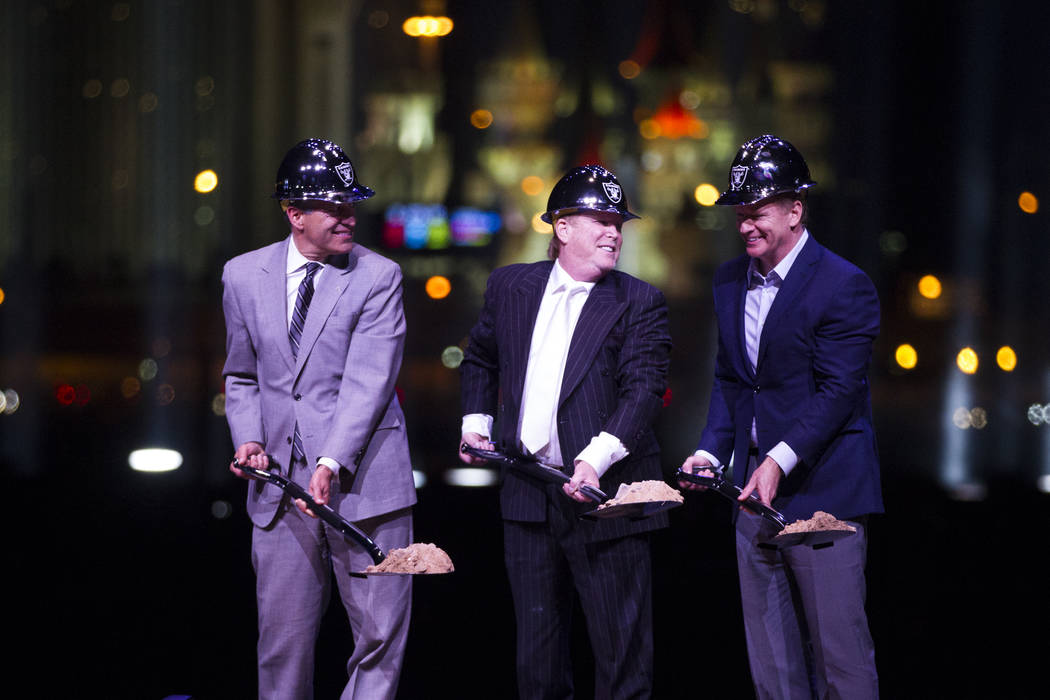 OAKLAND, Calif. — The Raiders have worn loose-fitting clothes over the subject of their Las Vegas relocation for months, careful not to flaunt their progress and further distress the Bay Area market in which they reside.

This is what makes now so significant.

The Raiders’ plans are showing, their deliberately quiet work in Las Vegas stepping onto a more visible stage. The switch was signaled Monday at a groundbreaking ceremony at the Russell Road stadium site that provided not only symbolic images of team-themed shovels in Las Vegas dirt — Nevada Gov. Brian Sandoval, Raiders owner Mark Davis and NFL commissioner Roger Goodell dug together — but also important comments afterward.

Team president Marc Badain, who had previously declined an interview on the topic, was ready Monday evening to detail the Raiders’ growing presence in Las Vegas. The stadium is due by July 31, 2020. 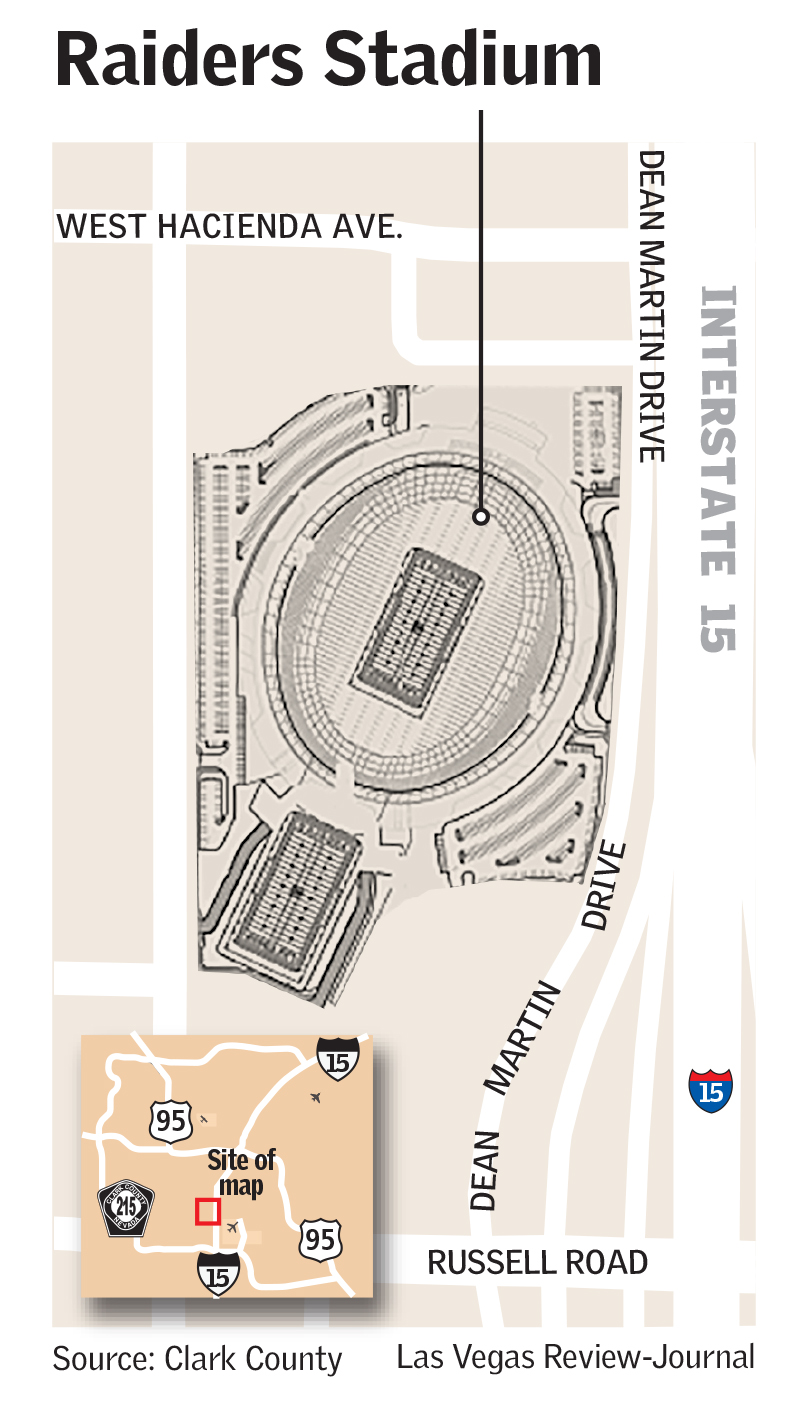 “We have, between ourselves and a firm called Legends that’s working for us in sales, I believe up to 35 employees already here,” Badain said. “Some (team employees) have moved from the Bay Area here. Some we hired from Nevada, and they’re bringing more to work in the sales center in the next two to three years.

“We have boots on the ground. We have office space. We’ve got a sales center we’re building now. We’ve got retail stores, so we’re getting here.”

Before this month, there was no video of the stadium construction site streaming live on the Raiders’ official website. There is now. On the site’s home page, a link to access those images appears prominently above a continued offer to purchase a $100 deposit for a personal seat license in Las Vegas.

Before this month, where the organization was targeting for its practice facility location was a secret — “probably the worst kept” one, Badain says. Discussions with Henderson are now confirmed to be ongoing for a 55-acre site near Henderson Executive Airport.

And before this month, the franchise had nine Raider Image official team stores. There is now a 10th — the first Nevada location opened Nov. 8 in Town Square Las Vegas. An 11th, based at the Galleria at Sunset mall in Henderson, is in development.

In April, the franchise unveiled at its stadium site a billboard that read “The Raiders are coming” in bold, capital white letters against a black backdrop. Here in November, more than any prior month, this declaration is coming to life in Southern Nevada. And this trend figures only to continue when construction sounds arrive at full volume.

“We’re just fortunate that, how everything played out, that we’re coming to Las Vegas and we’re coming here to Nevada,” Davis said Monday. “With the people that we’re working with here, you couldn’t find anything better. We’re very thankful how things worked out in that respect.”

At team headquarters in Alameda, California, any locker-room chatter among players regarding Las Vegas usually relates to the scheduled 2020 relocation being so distant or how nice its financial perks would be. California enforces the highest state income tax rate in the country at 13.3 percent. In Nevada, there is no state income tax. Players notice.

Of the 53 players on the roster, only five veterans and seven members of the rookie draft class are under contract through the 2020 season. Most who take the field Sunday against the New England Patriots in Mexico City almost certainly won’t be on the roster when the franchise moves. A stadium eventually springing out of desert dirt carries little reason for extensive group discussion.

Right guard Gabe Jackson should be affected. He signed a five-year, $56.8 extension in early July, keeping him under contract through the 2022 season.

Still, he said, he isn’t looking too far ahead and has yet to peruse the housing market in the Las Vegas area.

“Not yet,” Jackson said. “I haven’t even thought about it yet. Whenever they say we’re moving up there, around that time, I’ll start doing so.”

Off the field, the organization is playing in multiple arenas. The team provided black T-shirts to all its players in October following the Strip shooting. A heart-shaped logo is printed on the shirt’s front-left chest area. On the back, “#vegasstrong’’ appears in white letters. All players wore a helmet decal with the heart-shaped logo for an Oct. 8 game against the Baltimore Ravens.

On Oct. 15, he flew 30 first responders from Las Vegas to Oakland for a game against the Los Angeles Chargers. The police officers, firefighters and dispatchers met the likes of Davis, coach Jack Del Rio and quarterback Derek Carr on the field before the game. They watched the entire game from field-level seating at one of the Oakland-Alameda County Coliseum’s two baseball dugouts. Shortly following the shooting, Davis and the NFL combined to donate $150,000 to victims and other relief efforts.

Some of the team’s draft picks on April 29 were announced at the famous “Welcome to Fabulous Las Vegas” sign.

Today, multiple postings for Las Vegas-based positions appear on the Raiders’ job board.

As Badain referenced, the team has partnered with Legends Hospitality LLC, a high-powered firm whose website lists Yankee Stadium, the San Francisco 49ers and Manchester City FC among its clientele.

“Through the whole process,” Davis said, “it’s been a balancing act, so to speak, of trying to enjoy the fact we’re going to be moving to Las Vegas but not disrespecting the fans in Oakland. They’re very, very dear to us, very important to us. And so that’s been the toughest thing. We’re still the Oakland Raiders right now. My goal is to try to bring us a championship while we’re still playing in Oakland in 2018 and, if things work out, 2019 as well.

“But this is really a (significant time) for the Raiders organization and Raider Nation as a whole. We’ve looked for a home for many, many, many, many years. Now we’ve got something that we’re all going to be proud of.”

As time progresses and the stadium is built, the Raiders’ relocation will move further into the forefront of all aspects tied to the organization.