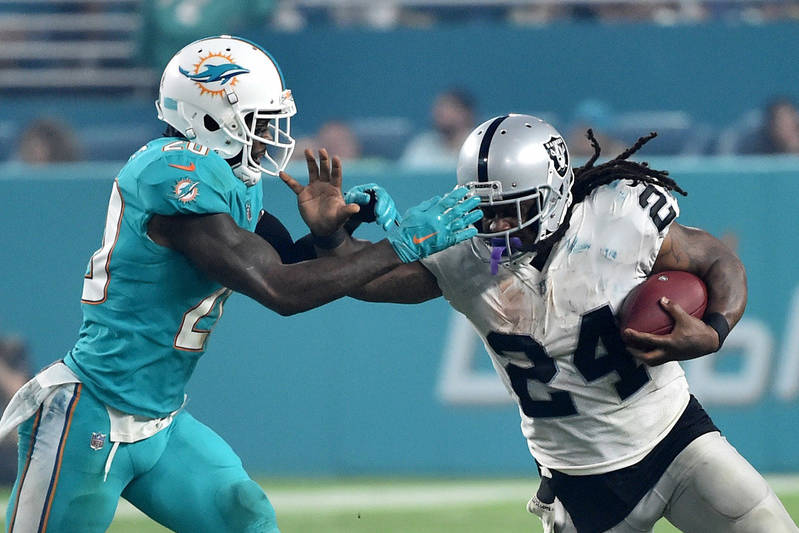 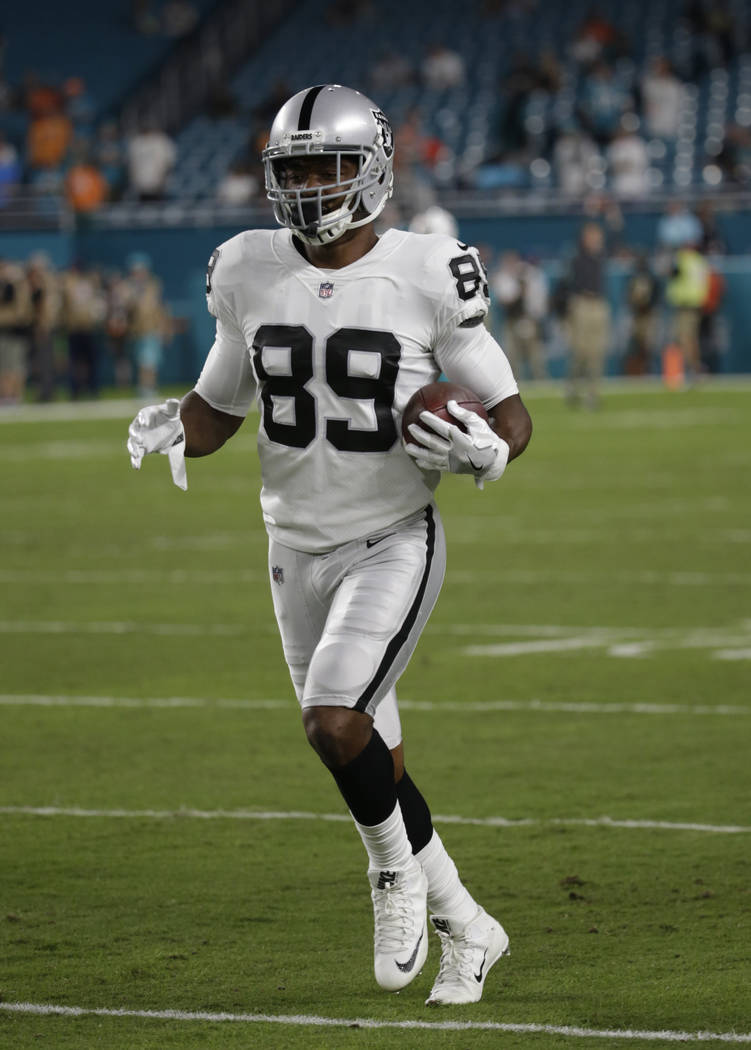 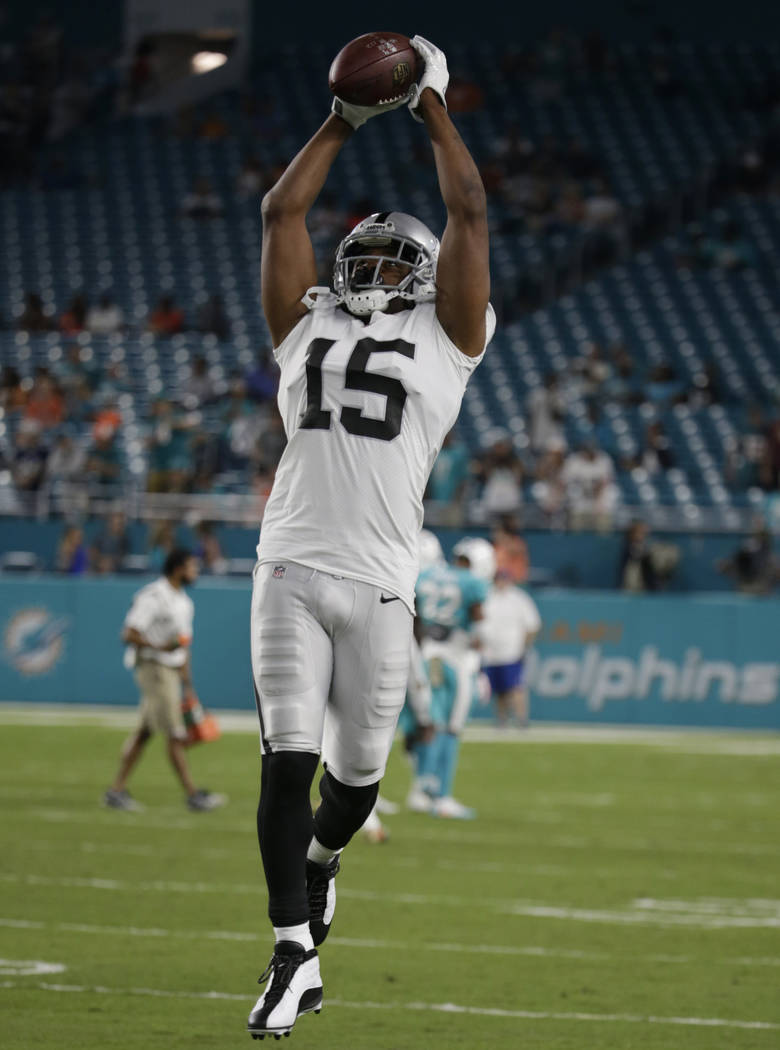 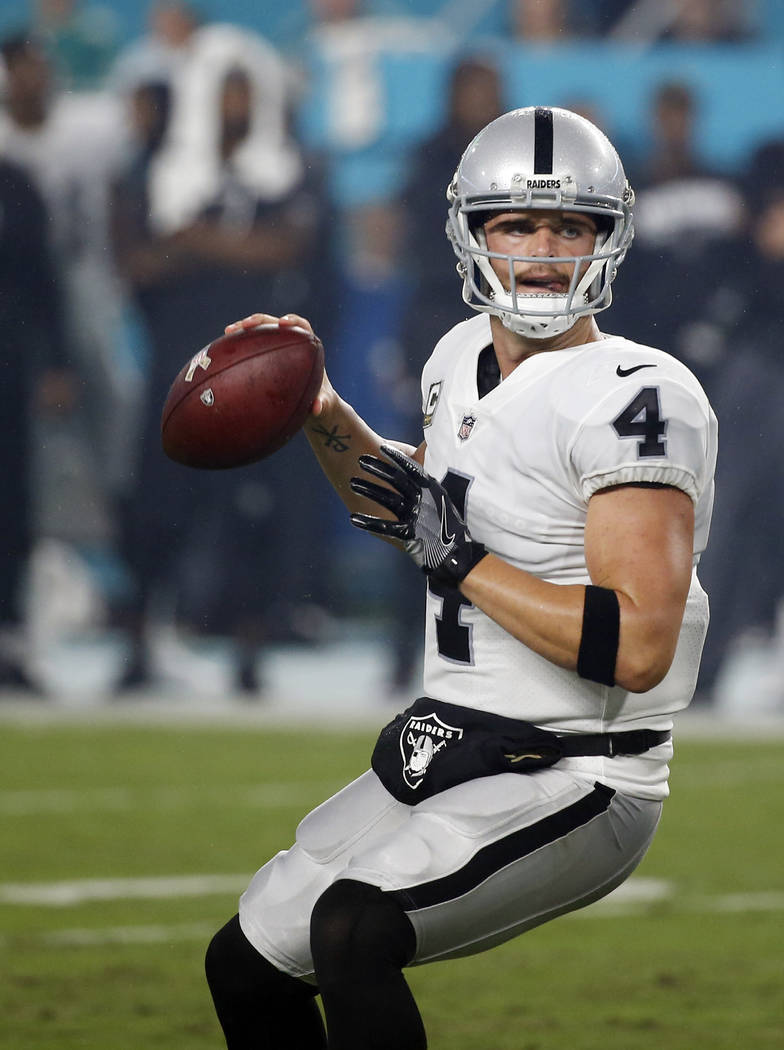 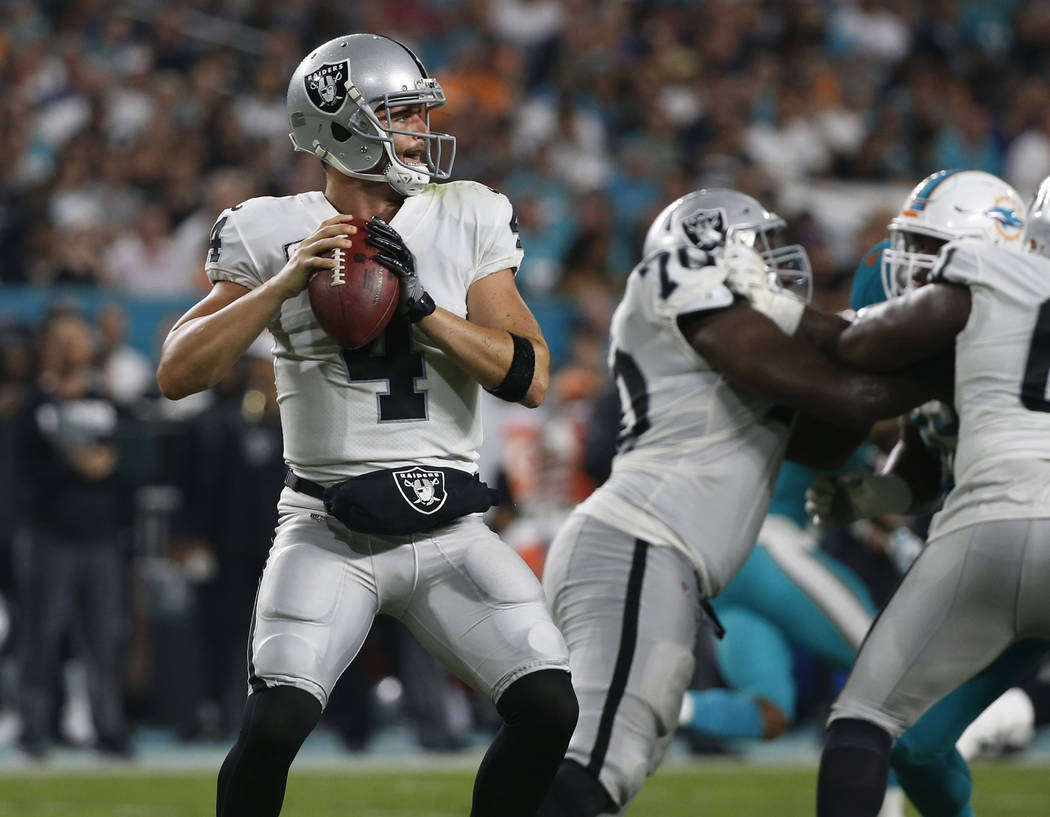 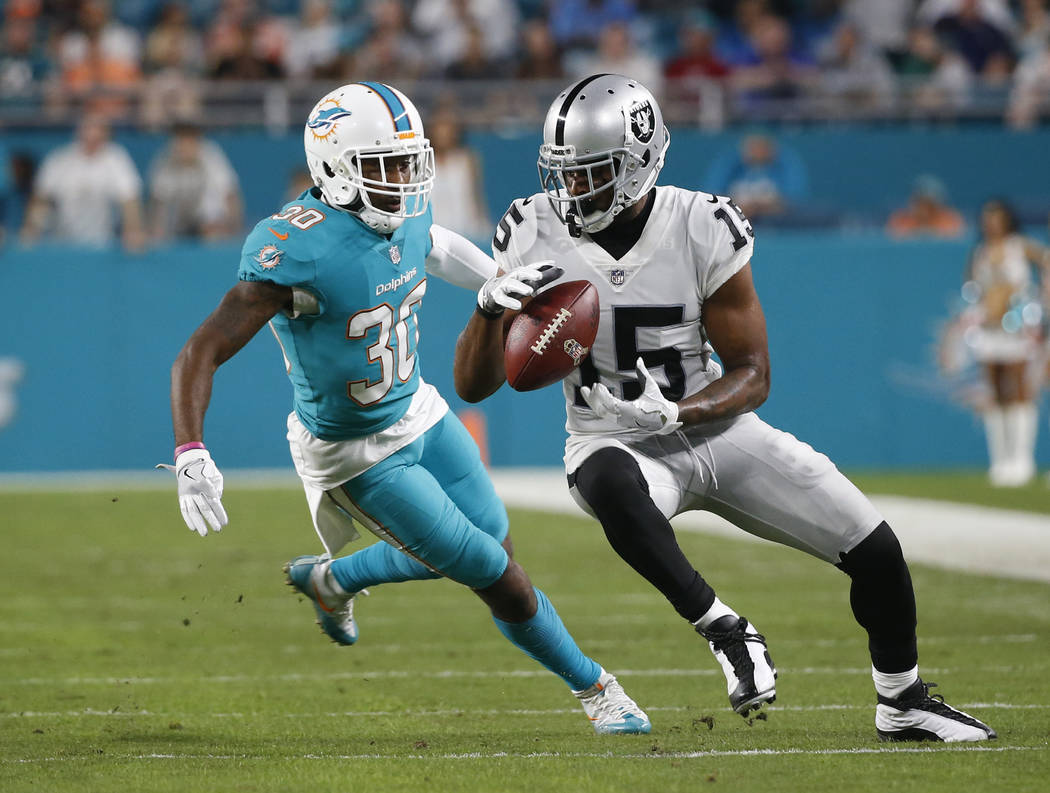 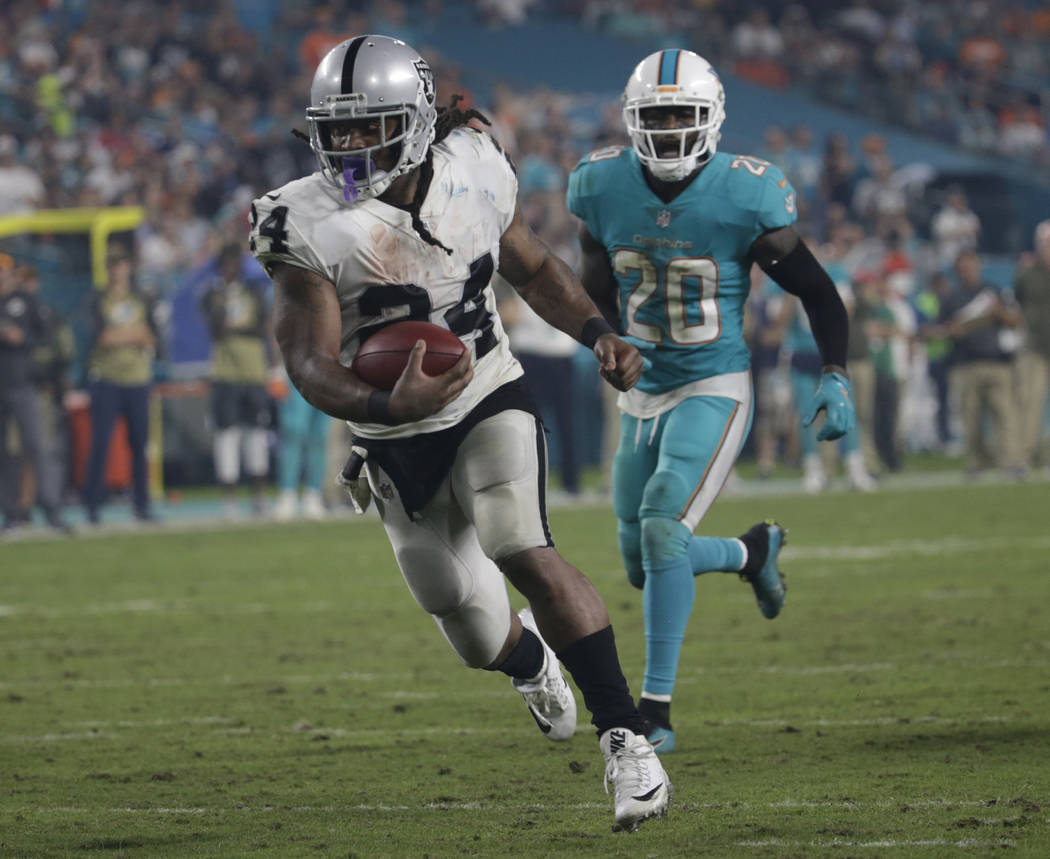 Oakland Raiders running back Marshawn Lynch (24) runs for a touchdown ahead of Miami Dolphins free safety Reshad Jones (20), during the second half of an NFL football game, Sunday, Nov. 5, 2017, in Miami Gardens, Fla. (AP Photo/Lynne Sladky) 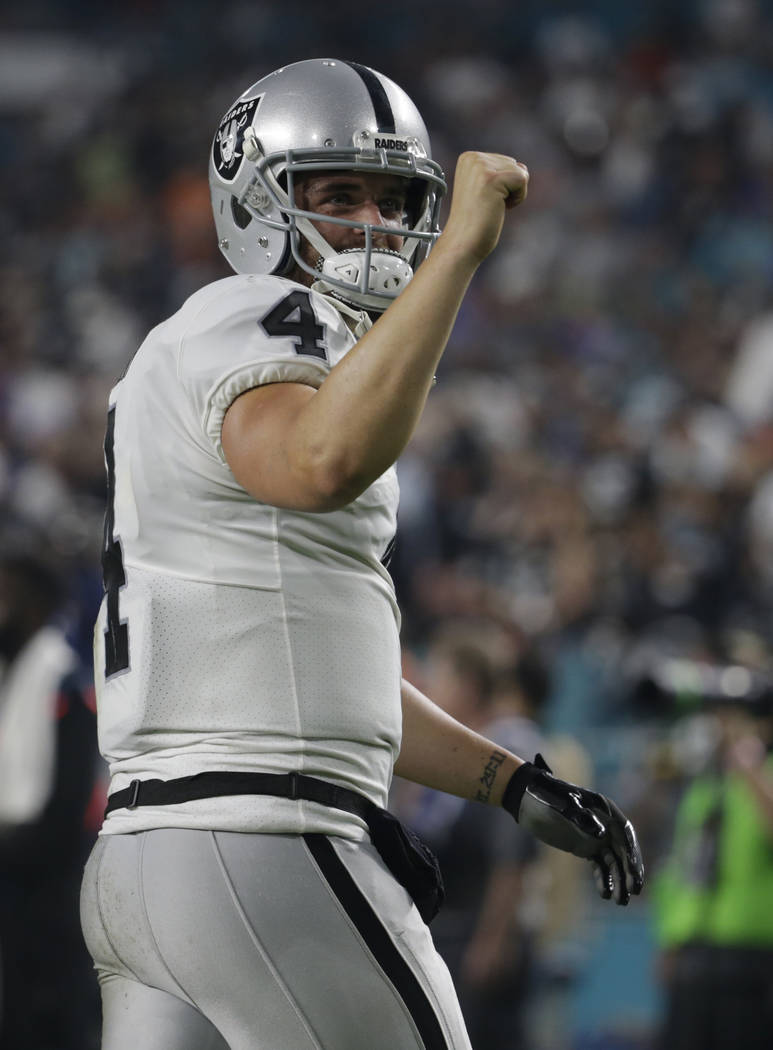 Oakland Raiders quarterback Derek Carr (4) gestures after his team scored a touchdown, during the second half of an NFL football game against the Miami Dolphins, Sunday, Nov. 5, 2017, in Miami Gardens, Fla. (AP Photo/Lynne Sladky) 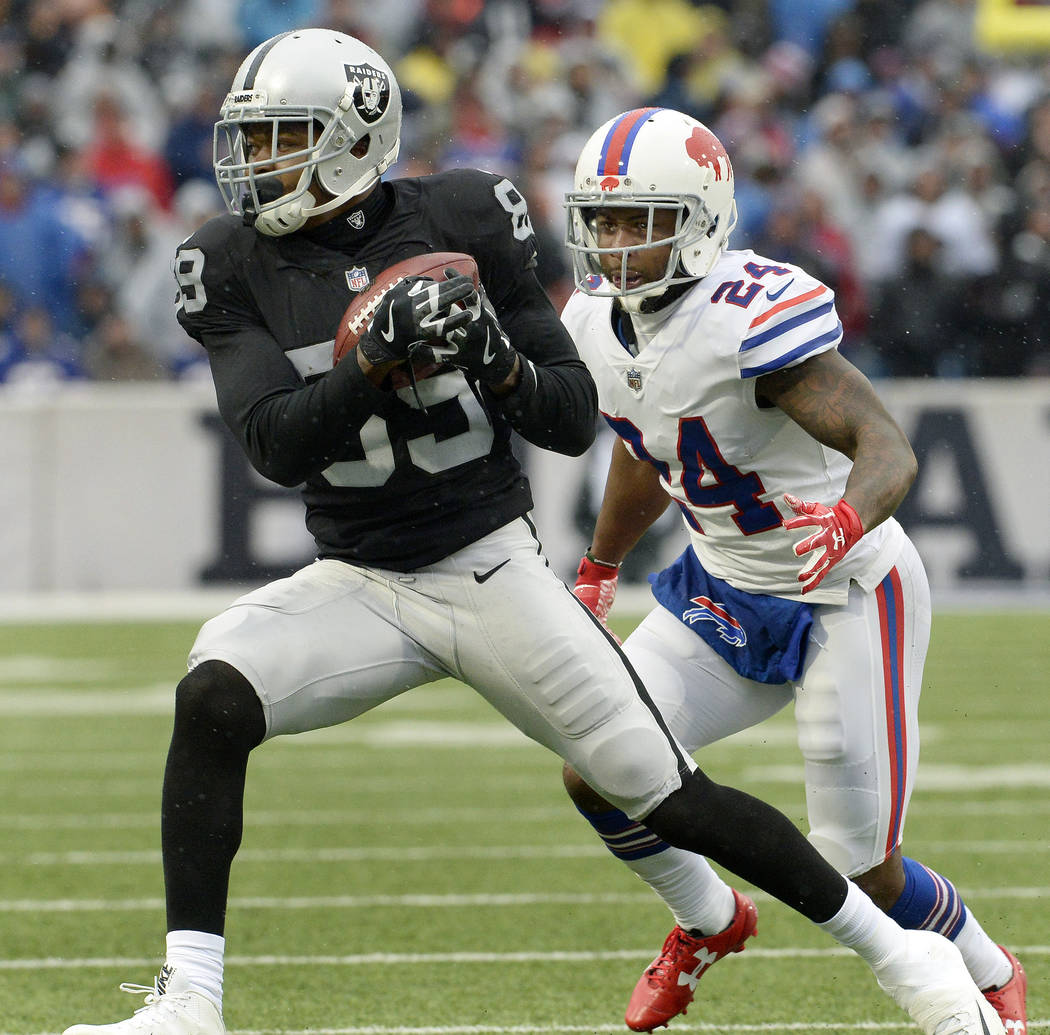 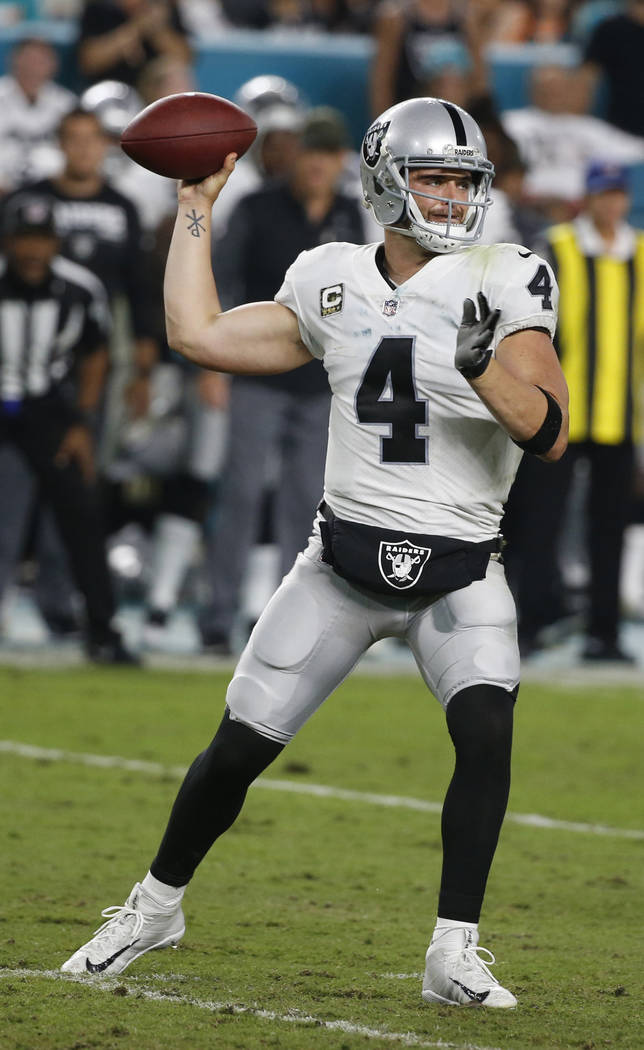 Oakland Raiders quarterback Derek Carr (4) looks to pass, during the second half of an NFL football game against the Miami Dolphins, Sunday, Nov. 5, 2017, in Miami Gardens, Fla. (AP Photo/Wilfredo Lee) 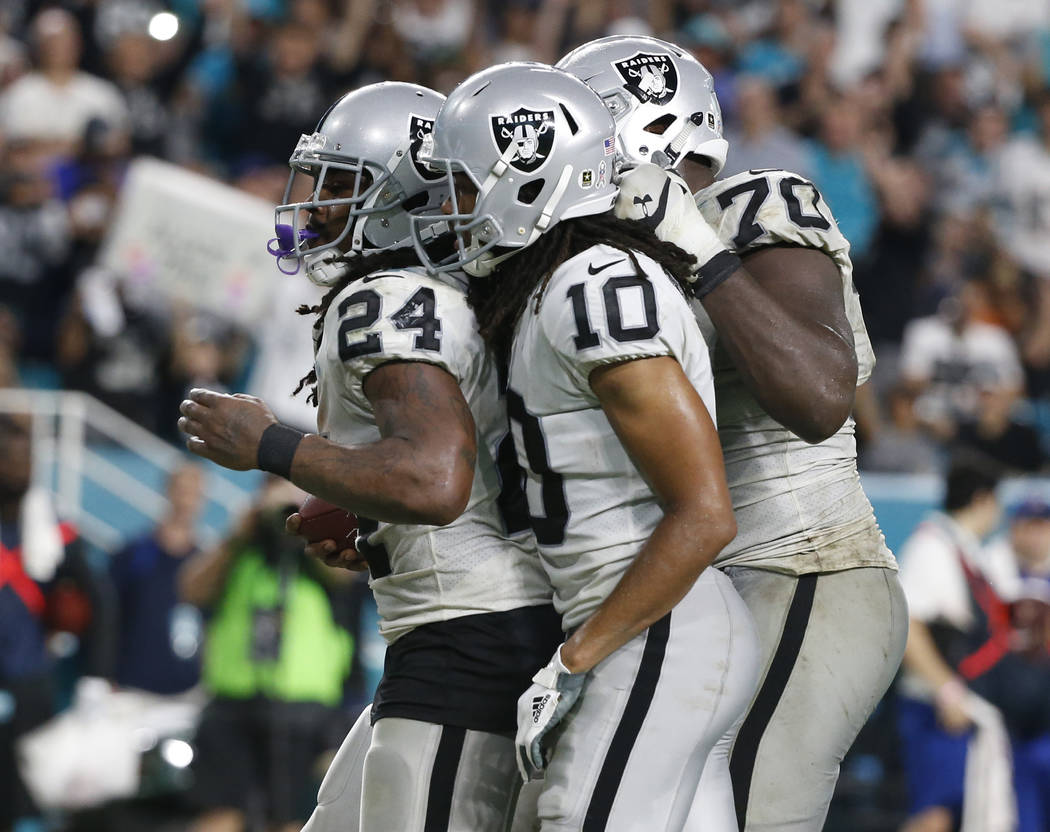 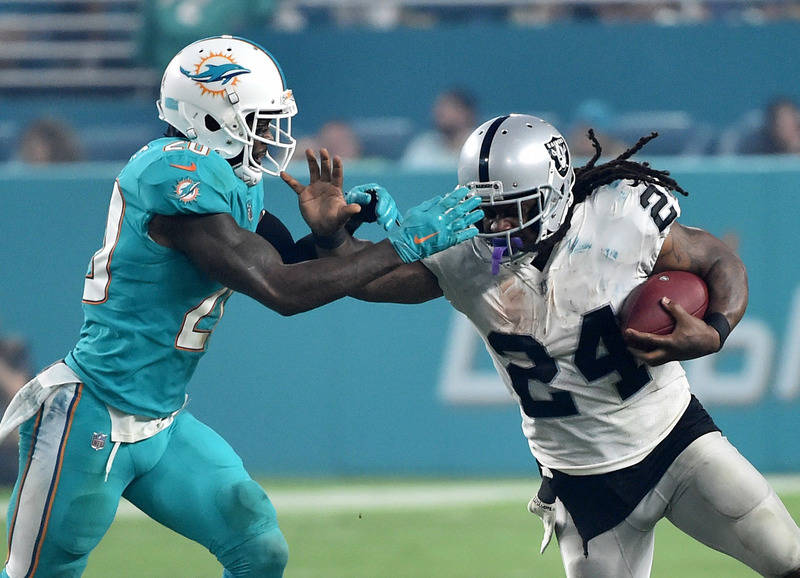 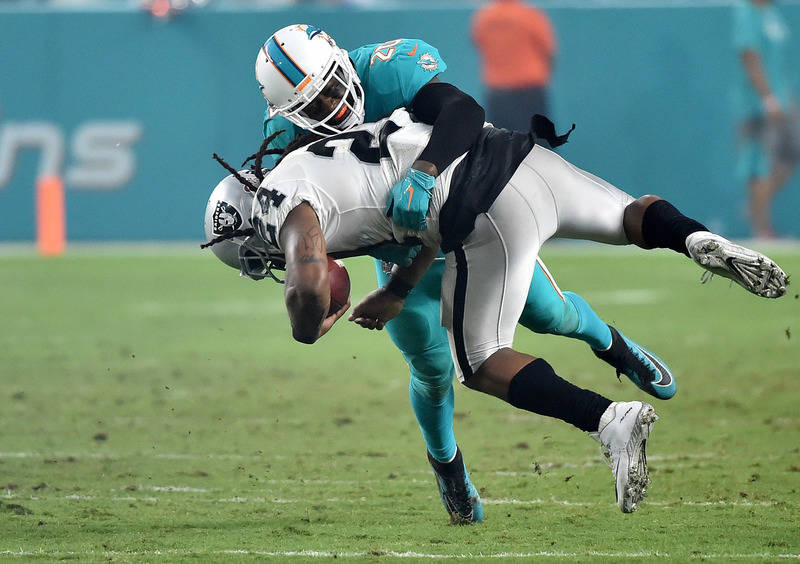 The Raiders face the New England Patriots in Mexico City at 1:25 p.m. Sunday. Here’s a breakdown by position.

No quarterback other than maybe Aaron Rodgers can match up on paper against Tom Brady, who arguably is having his best season at age 40. Brady is the reason the Patriots’ complex offense is in sync despite numerous injuries. He leads the NFL in passing yards with 2,807 and has thrown for 19 touchdowns and only two interceptions. The Raiders’ Derek Carr has broken out of his early funk with three straight games over 300 passing yards.

The Patriots don’t have a stud workhorse, but they’re probably the deepest team at running back. Dion Lewis, James White and Rex Burkhead can make plays in the passing and running games. Mike Gillislee is the goal-line specialist. Marshawn Lynch arguably had his best game as a Raider when he scored two touchdowns against the Dolphins in Week 9.

The Raiders boast a strong trio of Michael Crabtree, Amari Cooper and Jared Cook. But two of the three seem to disappear every week. Two weeks ago, it was Cook making the big plays while Cooper and Crabtree had quiet outings. The Patriots are banged up at wideout, but usually have multiple players step up. New England has speed with Brandin Cooks, and torch teams in the middle with Rob Gronkowski.

There’s a reason the Patriots’ running back committee is lighting up opposing defenses. The New England offensive line is one of the top run blocking teams in the NFL and give Brady plenty of time. The Raiders’ Marshall Newhouse (hip/quad) and Gabe Jackson (ankle) are listed as questionable.

This is probably the weakest position for the mighty Patriots. They often struggle to apply pressure on opposing quarterbacks. The Raiders aren’t much better, but still have Khalil Mack creating havoc in the trenches.

The Patriots are ranked 24th in the league against the run and allow 121.1 yards on ground per game. Kyle Van Noy and and Elandon Roberts start at linebacker for the Patriots. NaVorro Bowman and the Raiders are 20th against the run, giving up 116.6 yards per game.

Patriots cornerback Stephon Gilmore and Malcolm Butler got the bulk of the blame for the team’s early struggles. Gilmore and Butler have turned it around, as the Patriots haven’t allowed a team to score more than 17 points during the five-game winning streak. The Raiders’ defensive backs have been hampered by injuries most of the season and just lost rookie Gareon Conley for the rest of the year. This could be a long day for the Raiders.

The Patriots jumped to a 20-6 lead against the Broncos last weekend thanks to their special teams. Lewis returned a kickoff 103 yards for a touchdown.

The Raiders will be far away from their home in Oakland, but they’ll have the home-field advantage at Estadio Azteca. The Silver and Black are beloved in the capital city of Mexico.

Micah Roberts (Sportsline.com): Patriots 38-20 — The Patriots have a major edge, having just played in Denver to prepare for being 7,200 feet above sea level in Mexico City. They then practiced in Colorado’s high altitude all week. New England has won five straight (4-1 ATS), with its defense holding those opponents to 13.0 points per game.