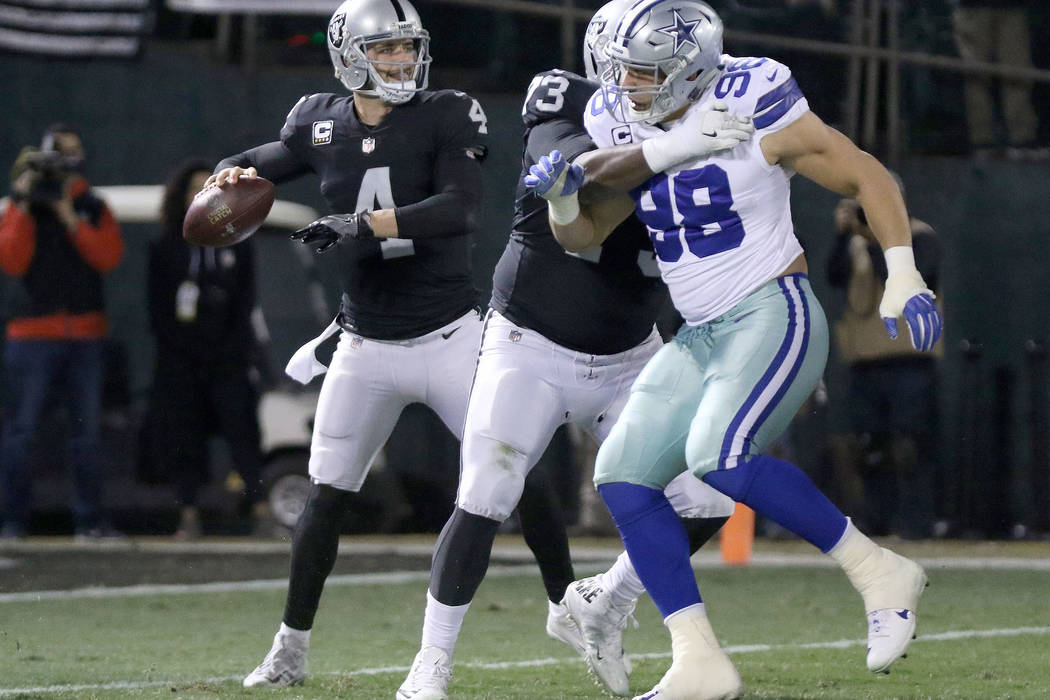 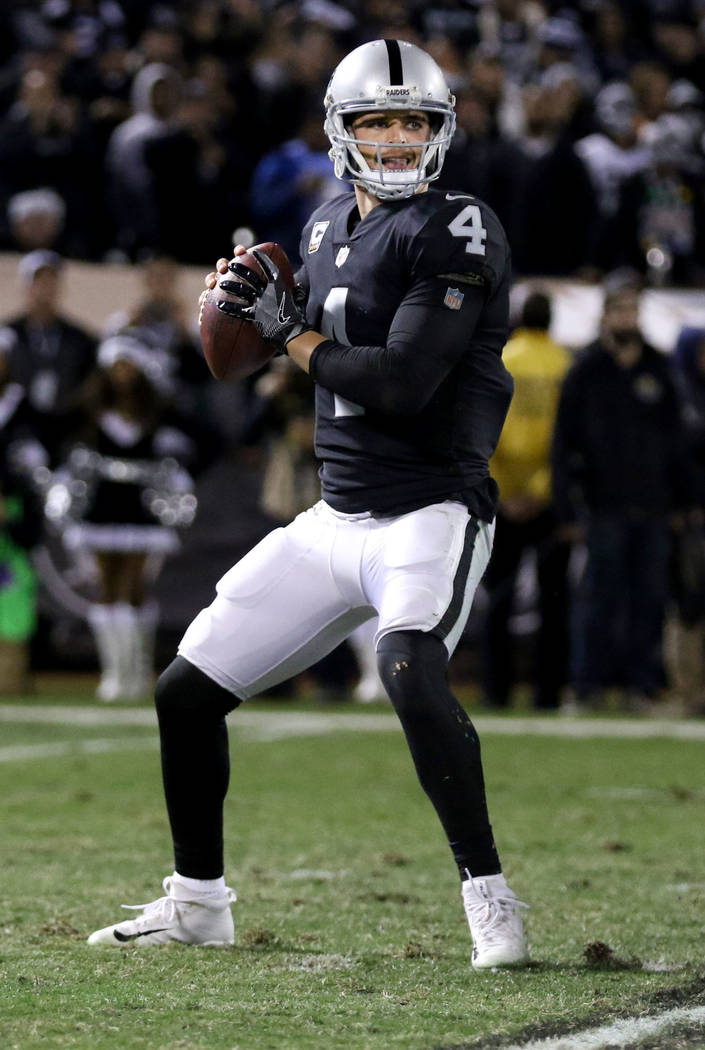 Oakland Raiders quarterback Derek Carr (4) drops back to pass during the first half of a NFL game against the Dallas Cowboys in Oakland, Calif., Sunday, Dec. 17, 2017. Heidi Fang Las Vegas Review-Journal @HeidiFang

His legs helped allow his arm to do it.

The Raiders quarterback threw his 100th career touchdown pass in the third quarter, a 1-yard lob to wide receiver Michael Crabtree. Carr became the fourth player in franchise history to reach the milestone. More notably, he is the fifth in NFL history to do so in his first four seasons.

Dan Marino, Peyton Manning, Russell Wilson and Andrew Luck are the only others to accomplish the feat.

Carr converted a third-and-6 on the drive with a 32-yard scramble. He entered the game with 15 rushing yards all season. The scramble was his longest since a 41-yard zone read against the Houston Texans in Week 2 of his 2014 rookie campaign.

Some records are best left unbroken.

Raiders cornerback Sean Smith intercepted two passes Sunday, single-handedly doubling the defense’s season total. The NFL record for fewest interceptions in a single season is four, set by the 2008 Detroit Lions. Oakland now has two games to distant itself from a squad that went 0-16 while establishing that low.

Smith’s third-quarter pick at the Cowboys’ 22-yard line set up the Raiders for a 39-yard field goal, leveling the score at 10-10. Smith initially returned the takeaway for a touchdown. That ruling was overturned, however, when the referee determined that wide receiver Cole Beasley tapped Smith when his left knee was on the ground.

Cornerback TJ Carrie nearly had a pick in the second quarter.

He instinctively jumped on a deep Dak Prescott pass intended for Beasley, but dropped the ball.

— The Cowboys outgained the Raiders 153 to 7 in total yards when taking a 10-0 lead early in the second quarter. Oakland opened with two three-and-outs despite having a second-and-2 and first-and-5 in those drives. It marked the third time in 2017 the Raiders failed to earn a single first down in the first quarter of a game.

— Center Rodney Hudson was added to the injury report Sunday with an illness. He was listed questionable but started. He has played every regular-season offensive snap since the start of the 2016 campaign.

— Defensive lineman Jihad Ward made a surprise start. The 2016 second-round pick was a healthy scratch in nine of the first 13 games this season. He almost missed a Week 14 game against the Chiefs while listed with a foot injury. He entered Sunday having played only 35 defensive snaps all year and none since Week 4.

— Defensive end Khalil Mack recorded two sacks Sunday, extending his streak to five straight games with at least one sack. He joined Denver Broncos defensive end Von Miller and New England Patriots edge rusher Chandler Jones as the only NFL players with 10-plus sacks in each of the past three years.

— Kicker Giorgio Tavecchio missed a 39-yard field to end the first half.