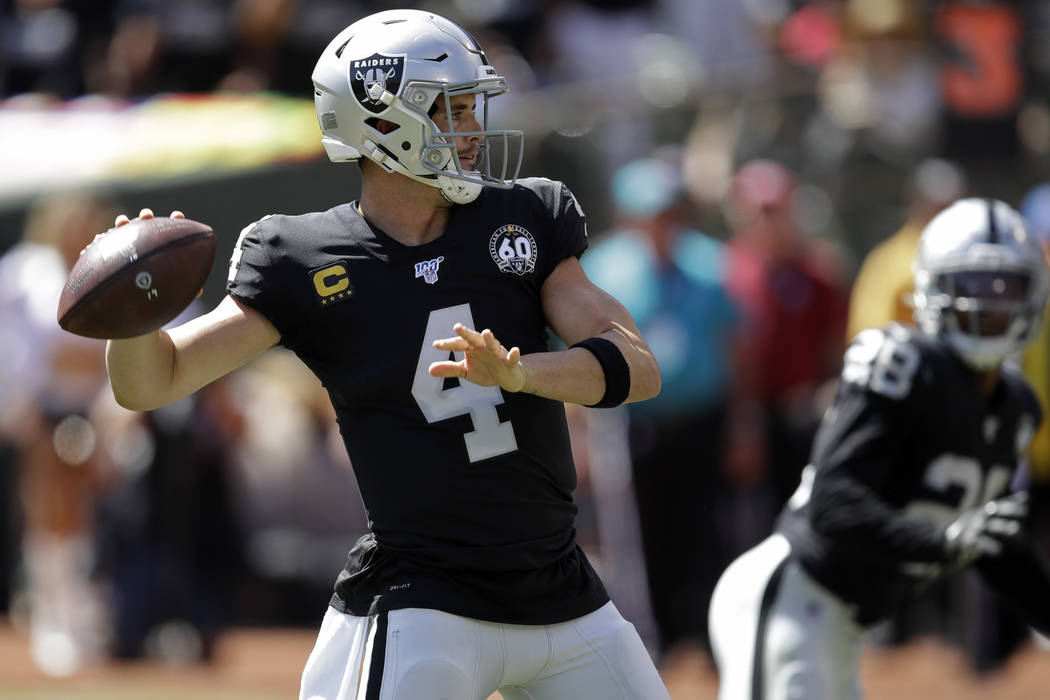 Oakland Raiders quarterback Derek Carr throws the ball during the first half of an NFL football game against the Kansas City Chiefs Sunday, Sept. 15, 2019, in Oakland, Calif. At right is running back Josh Jacobs. (AP Photo/Ben Margot) 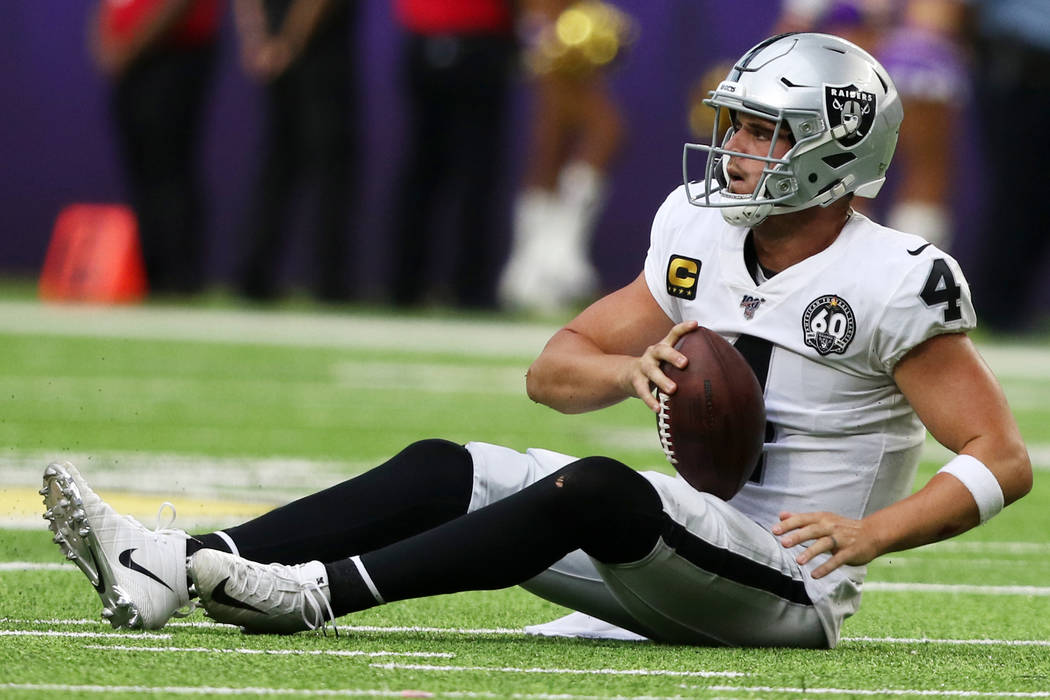 Oakland Raiders quarterback Derek Carr (4) remains on the field after being sacked during the fourth quarter of an NFL game against the Minnesota Vikings at U.S. Bank Stadium in Minneapolis, Minn., Sunday, Sept. 22, 2019. (Heidi Fang /Las Vegas Review-Journal) @HeidiFang 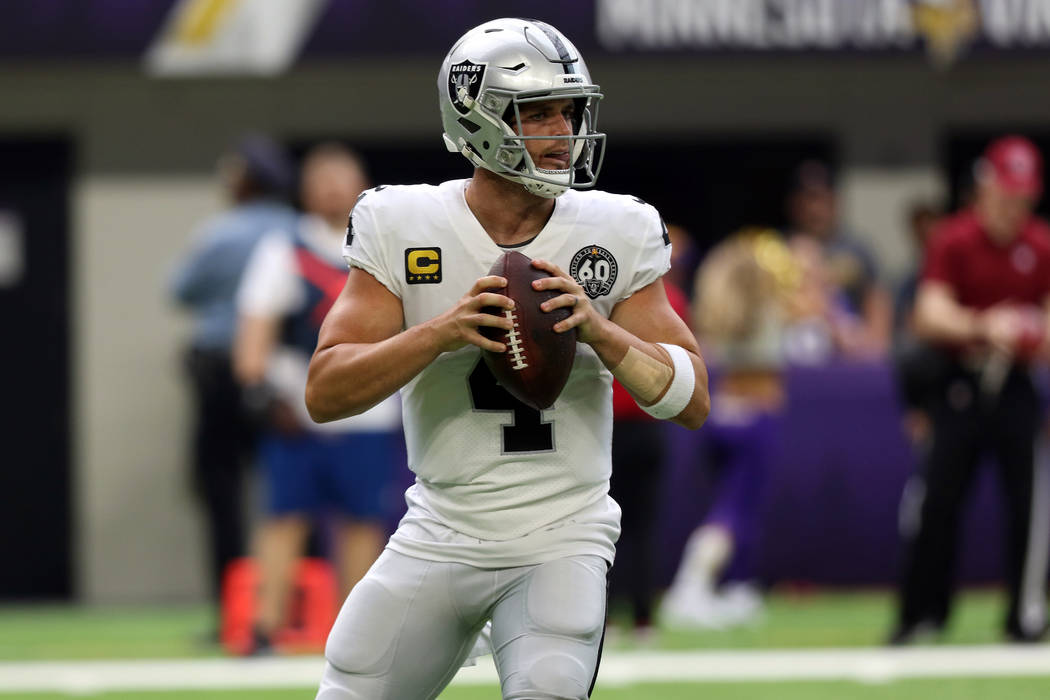 But quarterback Derek Carr said on Wednesday that just because the Raiders are 1-2 doesn’t mean the sky is falling.

“I don’t overreact after one or two games, to be honest with you,” Carr said Wednesday. “We’ve just got to be more consistent and better communicators, and I think we’re gonna be alright.”

The Raiders’ quarterback has been up-and-down to start the season, throwing for 699 yards with four touchdowns and three interceptions. He is completing 73.5 percent of his passes, but the offense has struggled to generate points.

Raiders coach Jon Gruden said the offensive issues are not all on Carr. While Gruden noted the offense is not a finished product, he said that mainly is the result of the numerous changes he’s made to it since last season and not to ineffective play from Carr,.

“I’m calling the plays and designing some of this stuff, so I put it on myself,” Gruden said, thinking back to Sunday’s 34-14 loss to the Vikings. “[Carr’s] doing a good job. Getting stuffed on fourth-and-a-foot isn’t his fault. He didn’t miss a blitz pickup in the red zone. We had a ball that could’ve been caught, could’ve set up points at the end of the half. He’s doing some good things.”

In reviewing last week’s game, Carr said he saw what he expected to on film. As he said last Sunday, Carr reiterated that he thought the Raiders didn’t have issues moving the ball. He said they just need to finish drives.

But the Raiders did have three drives to start the game that finished in their own territory, two punts and an interception.

One aspect of the offense that has impacted the team’s production is the instability at wide receiver behind No. 1 Tyrell Williams. When the Raiders released Antonio Brown just before Week 1, it had a trickle-down effect. Williams has been productive — catching a touchdown in each of the Raiders’ three games. And so has tight end Darren Waller, who is second in the league in receptions.

Still, Gruden said, it’s different not having one of the best wide receivers in the league catching passes.

“It’s caused us a little bit of re-thinking,” Gruden said. “We’re making an effort to move Tyrell around. We’re bringing on some younger guys. J.J. Nelson also got hurt — don’t forget that. Dwayne Harris got hurt. So we’ve had some multiple things to deal with, and we’re dealing with them.”

Gruden said earlier in the week that there would be competition at receiver. Then the club released veteran Ryan Grant, who was inactive for the Vikings game after recording a single catch for -2 yards against the Chiefs the week before.

While Carr would later say in his Wednesday press conference that he was unaware Grant had been cut, he ran through the progress of the Raiders’ receivers without mentioning Grant — or Keelan Doss, for that matter.

As the Raiders prepare to head to Indianapolis, Carr said one tangible thing he can improve is to stop trying to do too much. That’s something Carr says he’s gotten better at with experience.

“That’s my biggest fault I’ve ever had,” Carr said. “Thinking, ‘Oh man, I can do this’ — just chill out, bro. Just chill out and do your job and let the good play eat.”