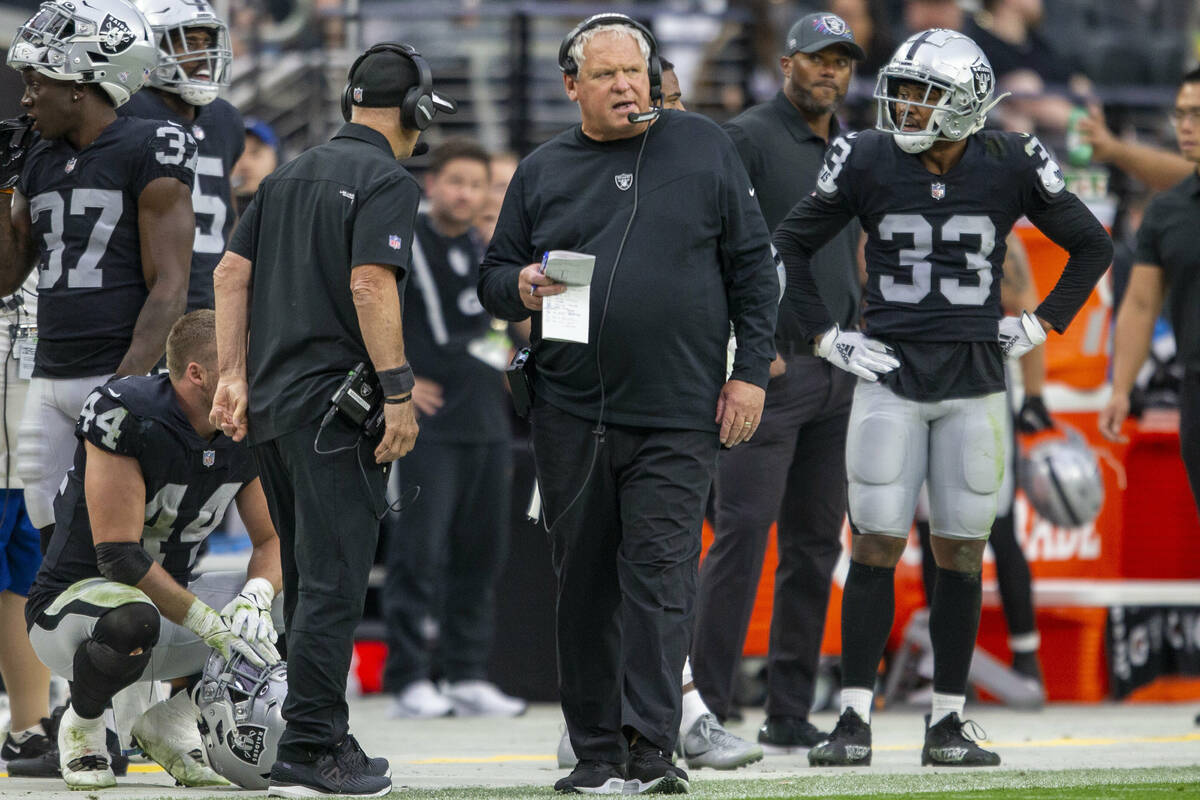 Raiders’ interim coach Rich Bisaccia doesn’t plan on having a proper Thanksgiving dinner this season as he takes his team on a work trip to play the Cowboys on Thursday.

“We’ll be traveling,” he said before boarding a plane on Wednesday. “I just look forward to playing a good football game and eating a Crustable on the plane home.”

Bisaccia was almost certainly referring to Smucker’s Uncrustables, a popular snack in the Raiders’ locker room.

The peanut butter and jelly variety is the most popular for the brand, but they do also market a turkey roll-up sandwich.

Linebacker Nick Kwiatkoski and cornerback Keisean Nixon will both miss Thursday’s game against the Cowboys with ankle injuries.

Both players also missed Sunday’s loss to the Bengals. Their absences were particularly felt on special teams.

Starting left guard John Simpson is questionable for Thursday with an oblique injury that caused him to miss the second half Sunday. “He moved around pretty good out there (Wednesday), so we’ll make a game-day decision to some degree on that,” Bisaccia said.

Jordan Simmons would likely start in Simpson’s place if he can’t play.

On the other side, wide receiver CeeDee Lamb returned to practice on Wednesday and has a chance to play for the Cowboys on Thursday should he clear concussion protocol.

Starting tackle Tyron Smith got in a second straight full session and is expected to play, but safety Donovan Wilson was placed on injured reserve with shoulder and chest injuries.

Linebackers coach Richard Smith did not travel with the team on Wednesday due to COVID-19 protocols, the team announced. His duties will be absorbed by the rest of the defensive coaching staff.

The Raiders have lost three straight games to fall from legitimate contender in the AFC playoff chase to being in danger of falling out of contention.

They need to start winning games again soon to avoid another second-half collapse, but Bisaccia declined to put any additional emphasis on Thursday’s result.

“I don’t believe in must-win games,” he said. “I believe every game is really important because it’s the next game we play. That’s kind of how we’ve approached all the games this year, and it’s how we’ve approached this week’s game. The difference in this game is it’s a fast turnaround. You get done playing on Sunday, the next thing you know you come to work on Monday and you’re really going on to the next game.”

Several Raiders have past ties to the Cowboys and have been a part of Thanksgiving games at AT&T Stadium, including Bisaccia and defensive line coach Rod Marinelli.

“What a great venue. To go into Dallas and play in the prime-time slot at 4:30 p.m. on Thanksgiving Day is one of those things we dream about as kids and young people playing in the backyard,” said Bisaccia, who coached with the Cowboys from 2013 to 2017. “I remember growing up and watching the Thanksgiving Day games with Clint Longley and Golden Richards and guys like that. So now to go play in this particular game, in this venue down there, our team I think is very excited about it.”