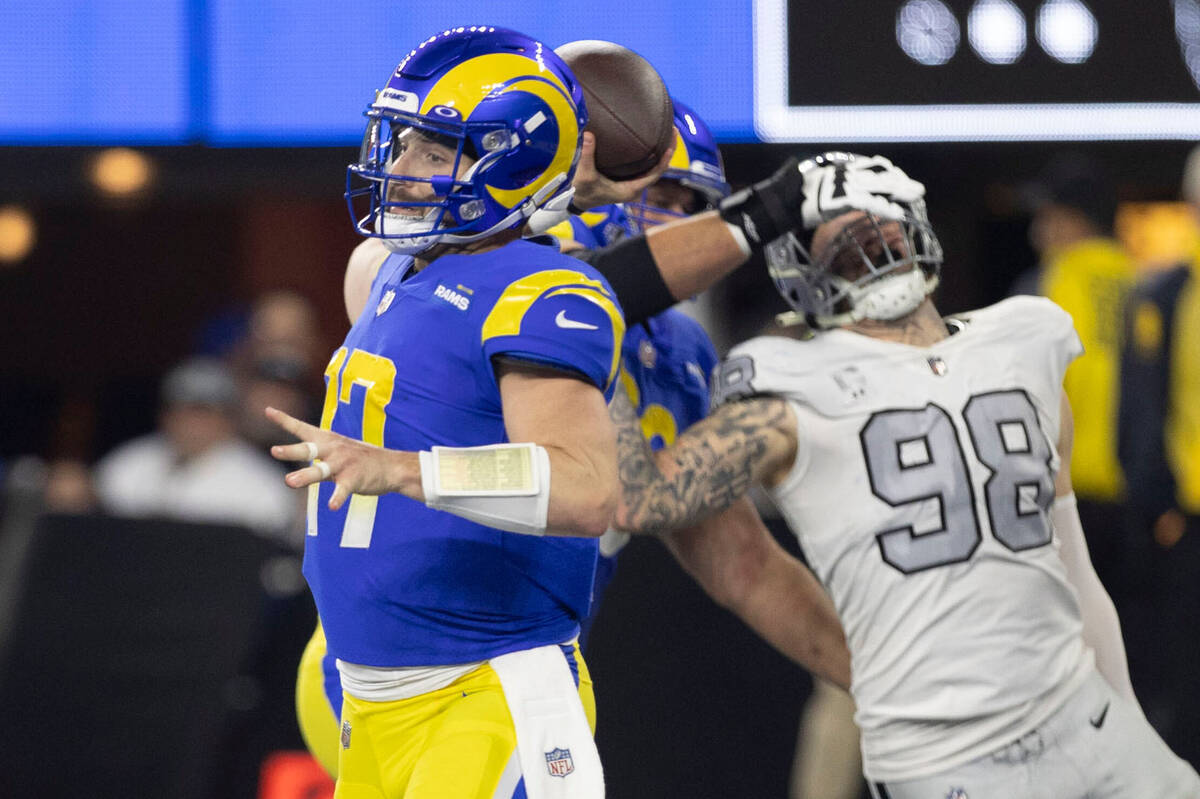 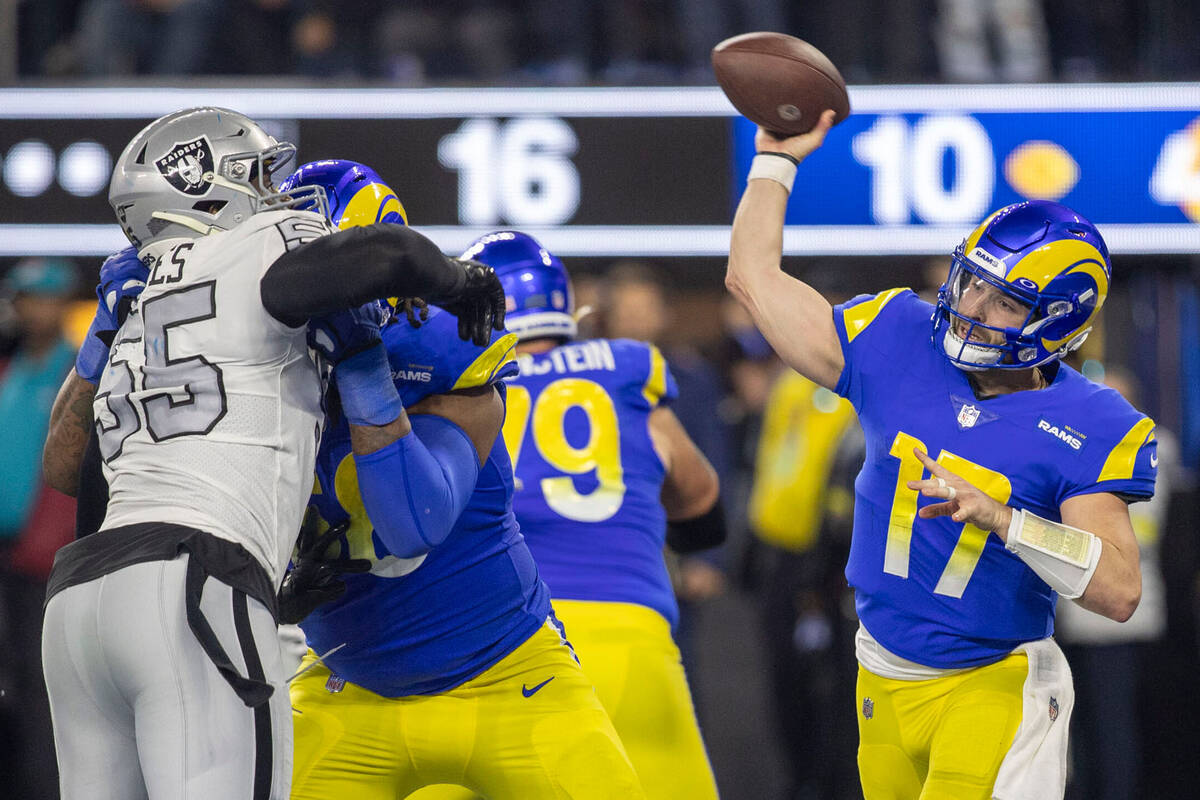 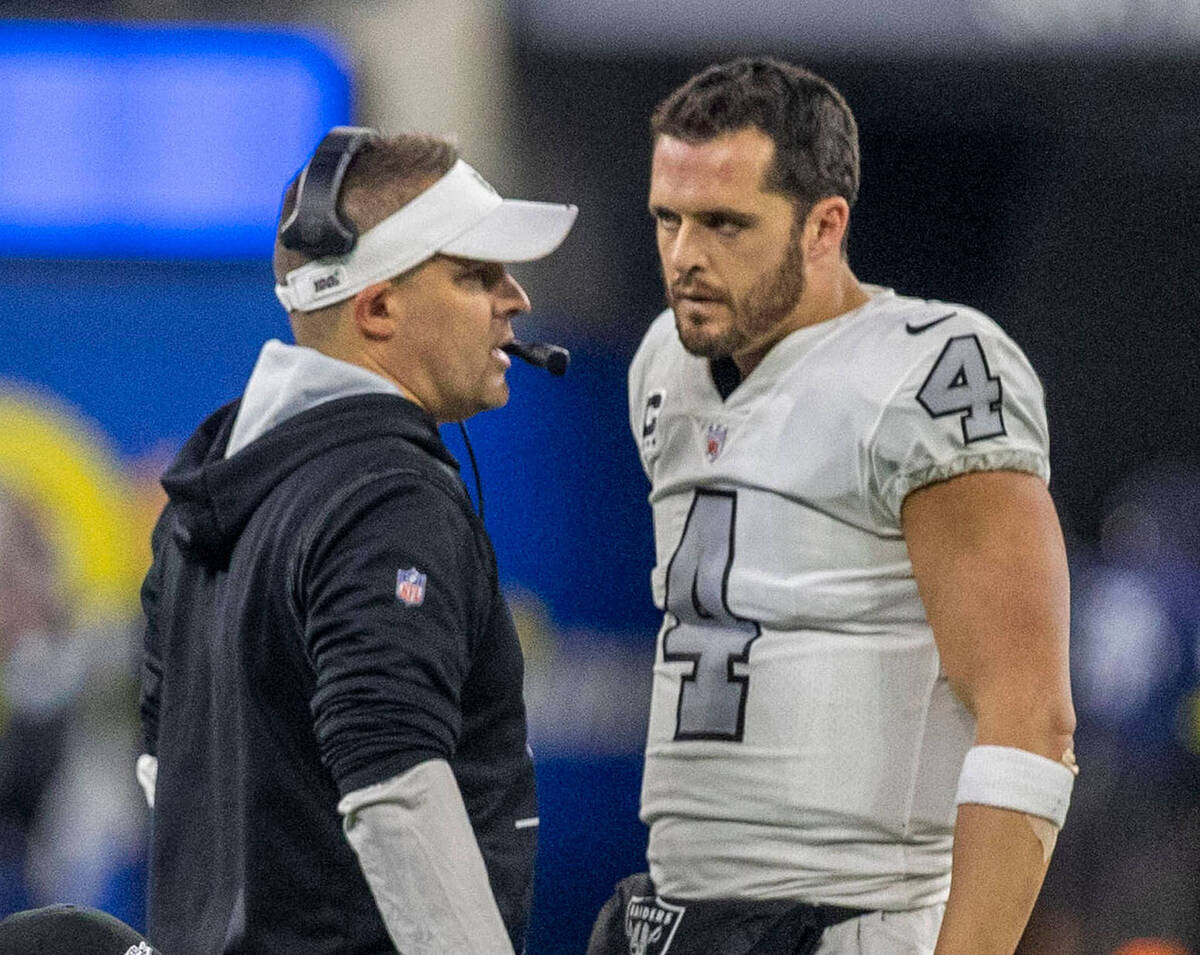 INGLEWOOD, Calif. — Baker Mayfield has been in Los Angeles for about two days and already authored a script straight out of Hollywood.

“I don’t know if you can write it any better than that,” he said after leading two consecutive touchdown drives in the final five minutes Thursday night to lift the Rams to a dramatic 17-16 win over the Raiders at SoFi Stadium. “Obviously, we’d like to be a little bit more stress-free, but it’s a pretty damn good story.”

The former first-round pick was claimed off waivers Tuesday after asking for his release from the Panthers. He was one of three quarterbacks active Thursday and called upon in relief after John Wolford got the start and handed off three straight times to open the game.

Mayfield made some crisp throws, but didn’t engineer much in the way of scoring drives and appeared on his way to an uneventful loss in his debut with the Rams.

But a 17-play, 74-yard touchdown drive that saw the Rams pick up seven first downs cut the deficit to 16-10 and served to at least make things interesting.

The Raiders then went three-and-out and punted to the Rams at the 2-yard line to set up the heroics. Mayfield hit Van Jefferson on a go-route in single coverage with 10 seconds remaining to secure the stunning victory.

“I was completely shocked they lined up in press coverage with 15 seconds left,” Mayfield said.

He gave credit to Jefferson.

“I really thought they were going to try to pop out and play zone, but they just stayed with it and saw the weakside safety stay down, and Van is a great go ball runner,” Mayfield said. “He won off the line.”

It was the longest game-winning drive that started in the final two minutes in the NFL since at least 2001 and the first of at least 95 yards since a Bears win over the Eagles in 2007, when they went 97 yards.

“Ball is ball, and when you have guys like that around you that put you in a good spot and help you out,” Mayfield said of his teammates.

Mayfield said the win ranks with his favorite moments in the NFL, especially after such a hectic week.

“It’s been a wild year,” he said. “I’m not going to say otherwise, from being in limbo in the beginning and not knowing where it’s going to go to the last 48 hours here.”

There wasn’t much time to do a final autopsy on what went wrong, but the film session will undoubtedly reveal the silly 15-yard penalty on defensive tackle Jerry Tillery as the biggest of many culprits.

After a sack that would have made it second-and-19 for the Rams from their 13-yard line with the clock running and no timeouts and 1:20 left, Tillery senselessly slapped the ball from Mayfield’s hand as he tried to give it to the referee for the spot.

The 15-yard penalty gave the Rams a first down and stopped the clock.

“I don’t know exactly what happened in the scrum,” McDaniels said. “I didn’t get any communication as to what was said or what was done, but you like your chances in that situation (if there is no penalty). They still have three downs to do it, but to give up a first down in that situation is obviously not an ideal scenario.

“Again, I don’t know exactly what happened. I’ll have to talk to (Tillery).”

Tight end Foster Moreau lamented his play before trying to articulate what happened in the final minutes.

“It sucks,” said Moreau, who didn’t secure his only target. “Absolutely sucks. There’s nothing to be said other than shut up and work harder. I guess just somehow pour in even more.”

Moreau was particularly disheartened with the offense being unable to move the pile a yard on a third-and-1 play that could have iced the game just before the two-minute warning and earlier settling for three field goals.

“We’re not finishing drives,” he said. “You let teams stick around, and they have players, too. They’re on scholarship, too.”

Quarterback Derek Carr joined some illustrious company on a night in which he had one of the worst statistical games of his career.

Carr threw for 137 yards to surpass 3,000 on the season for the ninth time in his career, joining Peyton Manning and Russell Wilson as the only quarterbacks in NFL history to do so in each of their first nine seasons.

But Carr went 11-for-20 and threw two interceptions, including a desperation heave on the final offensive play of the game. He threw for 11 yards in the second half.

The 36.9 quarterback rating is the lowest in a game in his career.