Raiders head coach Jon Gruden and quarterback Derek Carr spoke about the skills Chargers' quarterback Justin Herbert brings to the table and how to prepare for that. (Heidi Fang/Las Vegas Review-Journal) 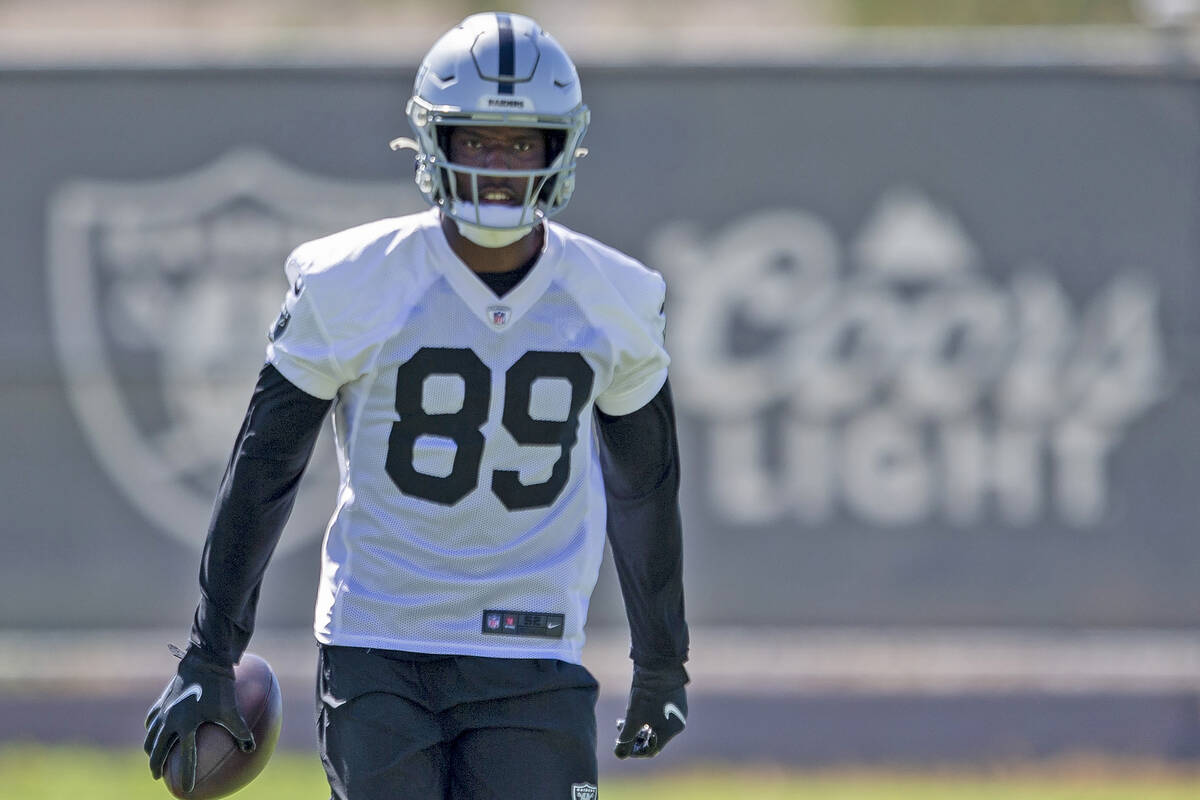 The bold blue sneakers with three of the famous white stripes and hints of metallic gold retails for $100, but Edwards is hoping to get a co-worker discount.

“With Henry being my teammate, I expect I should get a free pair. I really do like the shoe,” the second-year receiver said. “It’s a real smooth look.”

On the day running back Josh Jacobs returned to practice in a limited capacity after missing two games with an ankle injury, backfield mate Jalen Richard also returned to the field. His appearance opened the 21-day window the team has to decide whether to bring him back from injured reserve.

Safety Roderic Teamer, who has yet to play this season with an ankle injury, also got in a limited session on Thursday, the team’s first practice of the week.

Cornerbacks Nate Hobbs and Trayvon Mullen were both limited by shoulder injuries. Defensive end Solomon Thomas was limited with a knee injury.

Raiders quarterback Derek Carr has been named the AFC Offensive Player of the Month for September.

Carr led the Raiders to a 3-0 record while throwing for a league-high 1,203 yards on 88 of 136 passing. He also had six touchdowns while compiling a 101.4 quarterback rating.

He downplayed the significance of the honor.

“It always means something nice, but after three weeks it’s just like, ‘Thanks, cool, thumbs up,’” he said. “I appreciate it, but it will be cooler for my kids someday than it is for me. … I hope me putting that stuff off isn’t a dis at any of it, but at this point it doesn’t mean much.”

Carr is the fourth quarterback in NFL history to throw for 1,200 yards through the first three games of a season.

Carr is only the third Raiders quarterback to earn the honor along with Rich Gannon in November of 2001 and Jay Schroeder in December of 1990.

This is the first time Carr has earned the honor. He isn’t sure if there is any kind of trophy or tangible memento of the award.

“I think maybe you get an Instagram post that says, ‘Good job, buddy,’” he joked. “That’s about it, I think.”

On the same page

Carr said his working relationship with coach Jon Gruden has reached a point where he is starting to call the plays in the huddle before Gruden has finished communicating the full verbiage in the headset.

He also appreciates the trust Gruden has shown in him to ask his preference between two potential options in particular situations.

That evolution in their relationship is at least one factor in the 3-0 start and the offensive outburst.

“It’s always a work in progress,” Carr said. “I don’t want to say we’re there because I never want to feel like you’ve made it somewhere.

“But it’s those little things where we feel like we’re in a good place.”

Carr joked the success is impressive for two guys from small towns across the country from each other, which appeared to be a way to get in a jab about last week’s win for his alma mater, Fresno State.

“He’s just some coach from Dayton and I’m just a quarterback from Fresno,” Carr said. “We’re just trying to do our thing. We’re still trying our best.

“Even though we beat UNLV.”