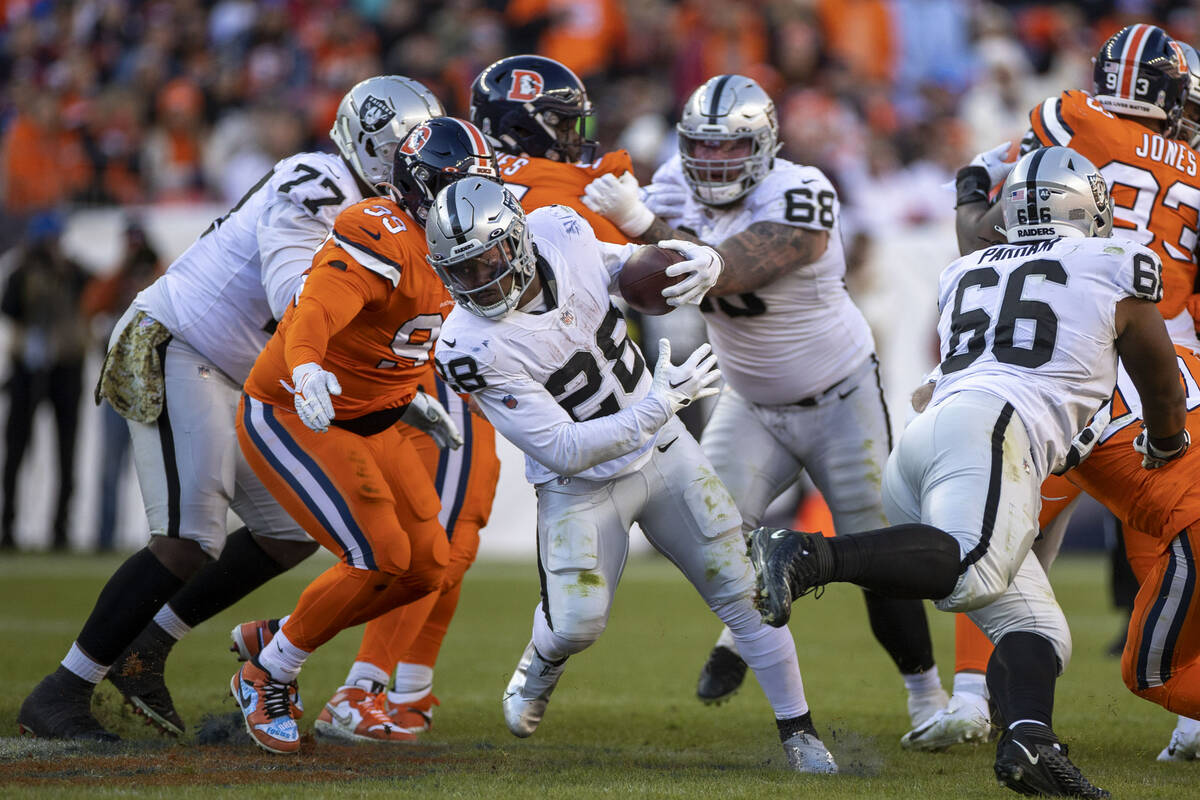 Raiders running back Josh Jacobs (28) looks for room to run against the Denver Broncos during the first half of an NFL game at Empower Field at Mile High Stadium on Sunday, Nov. 20, 2022, in Denver. (Heidi Fang/Las Vegas Review-Journal) @HeidiFang 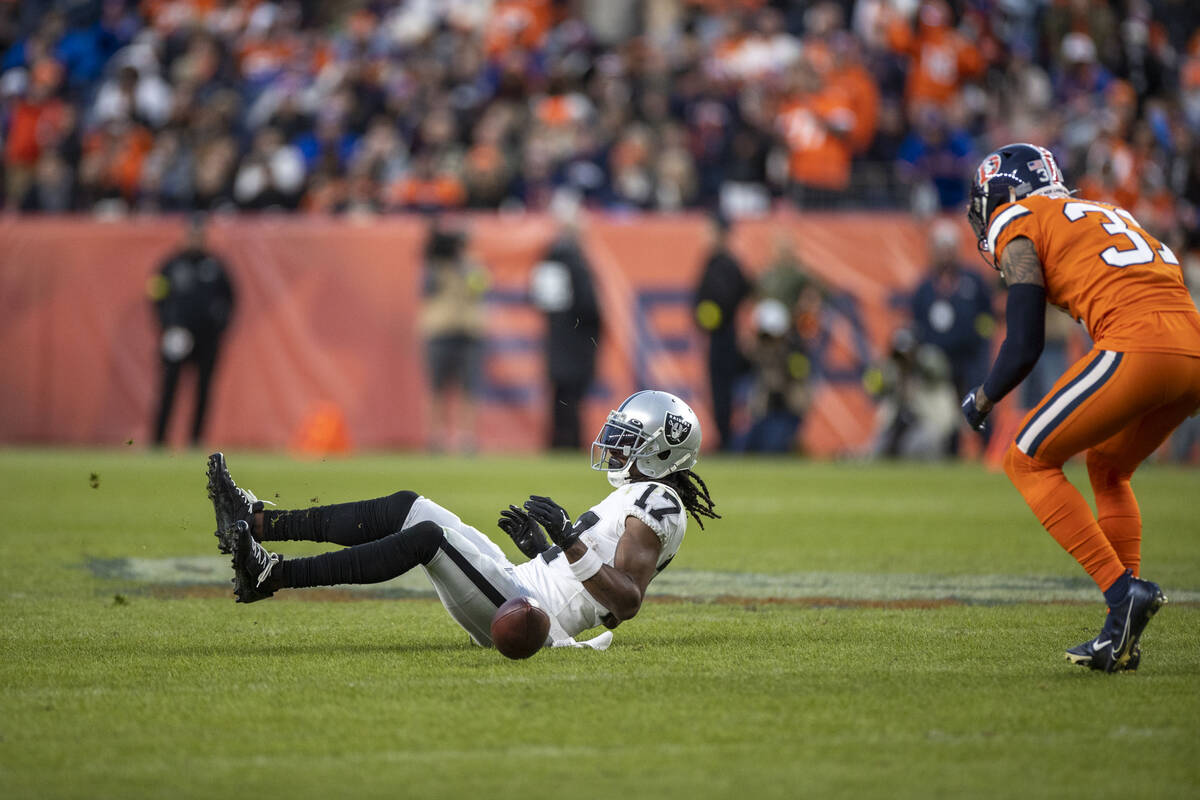 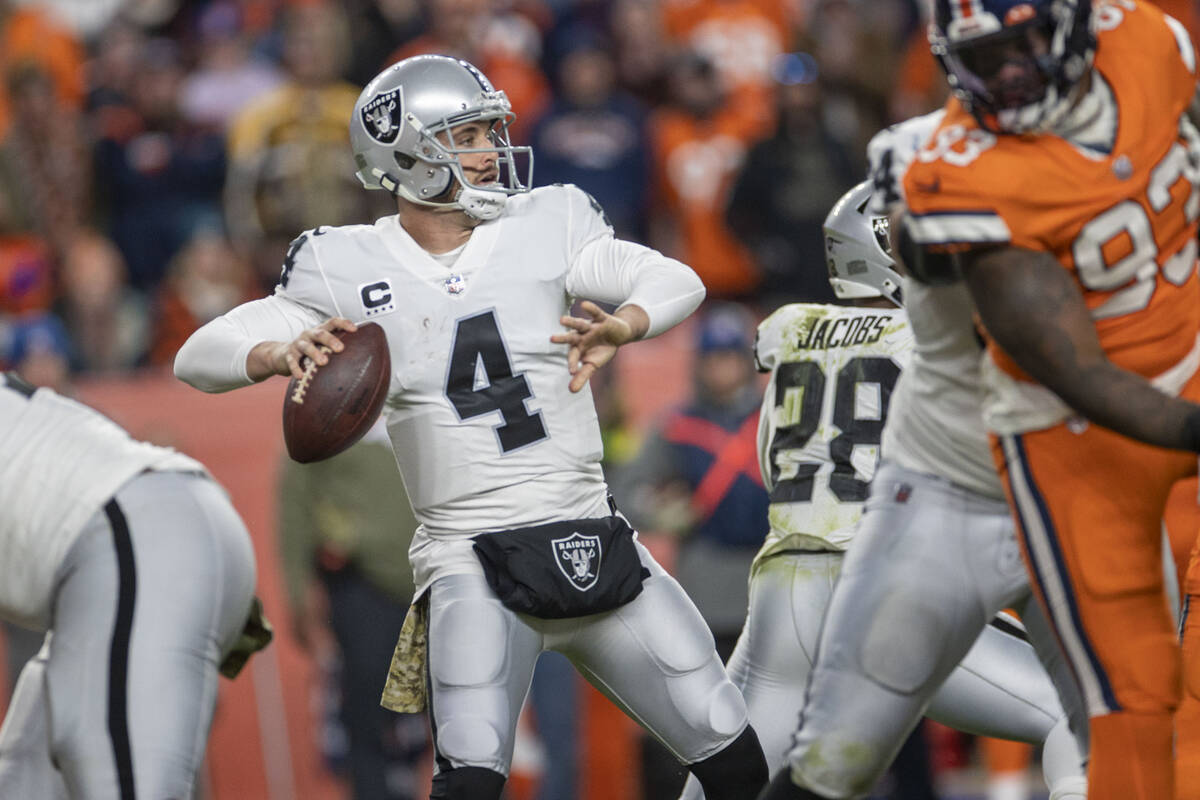 Raiders quarterback Derek Carr (4) throws against the Denver Broncos during the second half of an NFL game at Empower Field at Mile High Stadium on Sunday, Nov. 20, 2022, in Denver. (Heidi Fang/Las Vegas Review-Journal) @HeidiFang 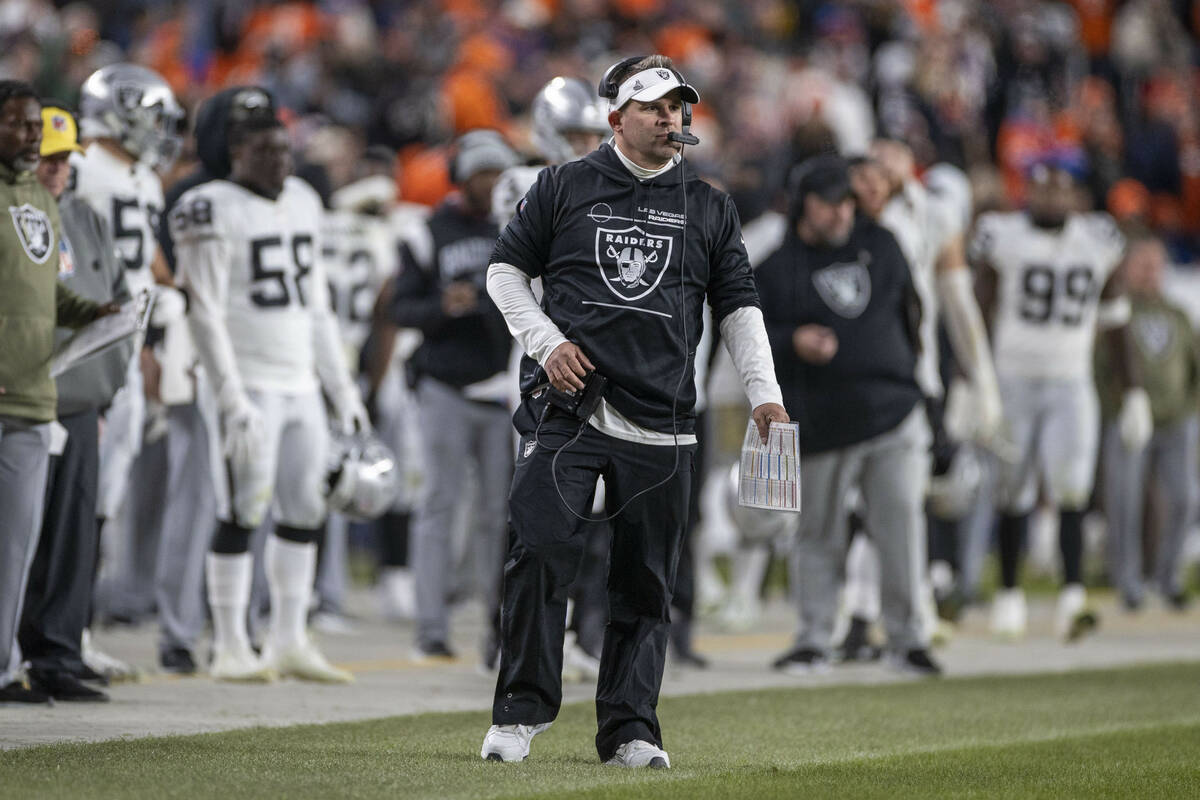 Raiders head coach Josh McDaniels looks on from the sideline during the second half of an NFL game at Empower Field at Mile High Stadium on Sunday, Nov. 20, 2022, in Denver. (Heidi Fang/Las Vegas Review-Journal) @HeidiFang 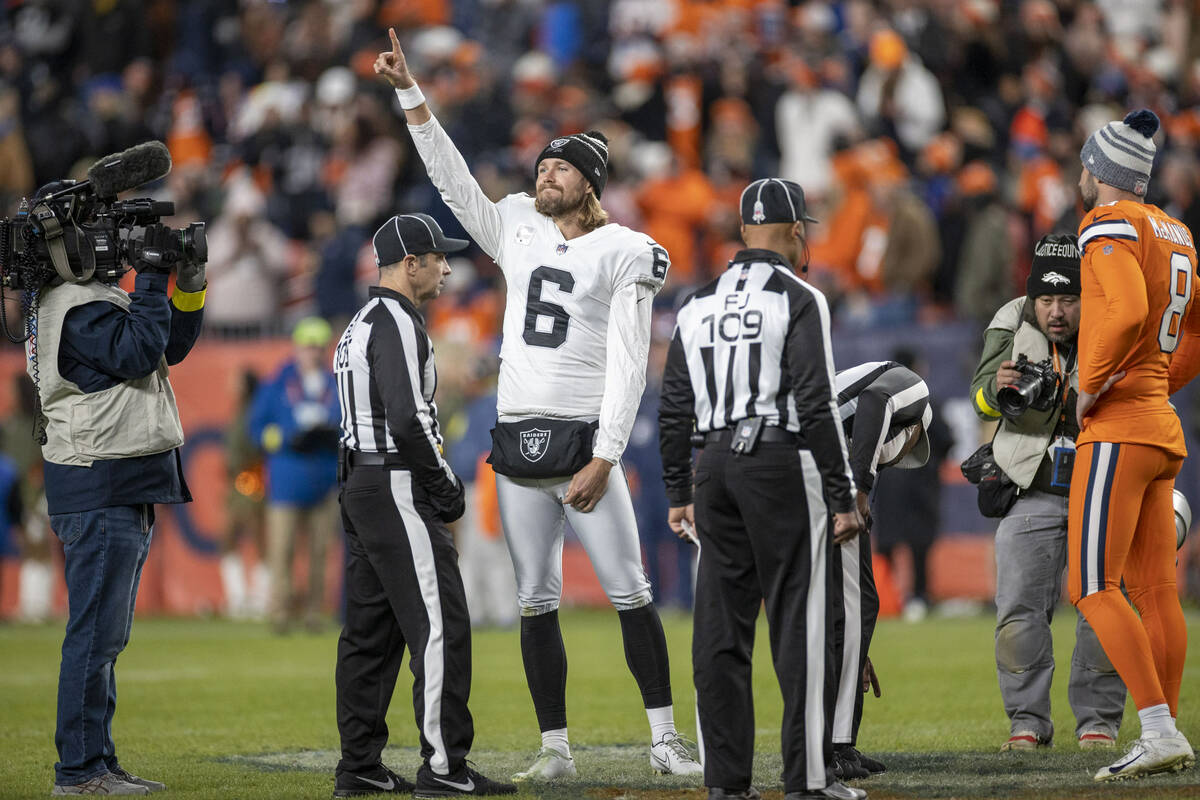 Raiders punter AJ Cole (6) signals that the team won the coin toss to start overtime during an NFL game against the Denver Broncos at Empower Field at Mile High Stadium on Sunday, Nov. 20, 2022, in Denver. (Heidi Fang/Las Vegas Review-Journal) @HeidiFang 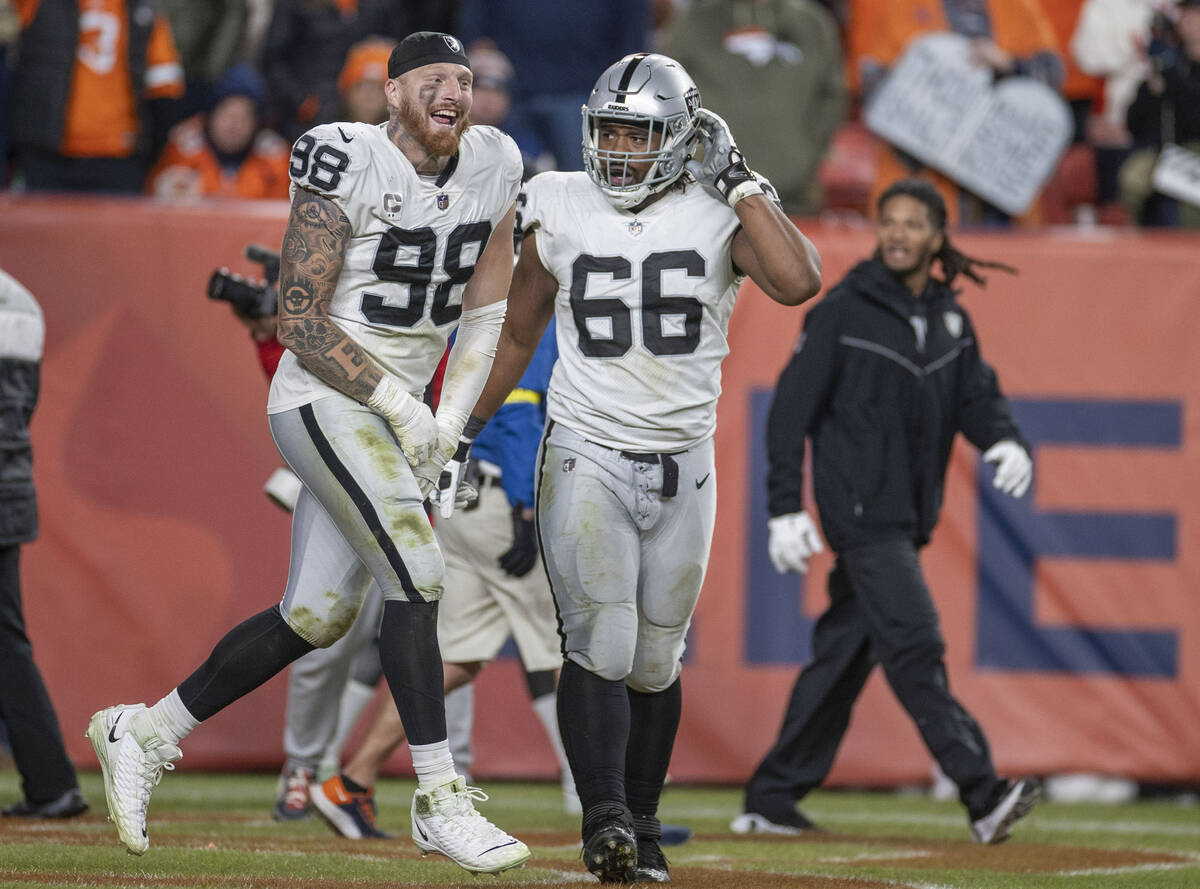 Raiders defensive end Maxx Crosby (98) runs on the field with offensive lineman Dylan Parham (66) in celebration after the team beat the Denver Broncos, 22-16 in overtime of an NFL game at Empower Field at Mile High Stadium on Sunday, Nov. 20, 2022, in Denver. (Heidi Fang/Las Vegas Review-Journal) @HeidiFang

DENVER — How the Raiders performed in a 22-16 overtime win over the Broncos on Sunday at Empower Field at Mile High:

Far too many early penalties keeps this from being an A, but you can’t argue with a 35-yard touchdown pass from Derek Carr to Davante Adams to win the game in overtime. Carr completed 23 of 37 for 307 yards and two scores to Adams, who caught seven passes for 141 yards. Josh Jacobs again showed well against the vaunted Denver defense, totaling 109 yards on 24 carries. The Raiders gained 407 yards. Seven players caught passes from Carr, including Mack Hollins (five for 52) and Jacobs (five for 51). The Raiders played without starting left tackle Kolton Miller (abdomen, shoulder), who was replaced by Jermaine Eluemunor.

It was the Maxx Crosby show for the Raiders, as the Pro Bowl edge rusher did a little bit of everything. He finished with six tackles, two sacks, three quarterback hits, a forced fumble and even blocked a field-goal attempt. Elevated from the practice squad Saturday, cornerback Tyler Hall accounted for three tackles (one for loss), along with a sack and quarterback hit. The Raiders held Denver to six second-half points. Russell Wilson completed 24 of 31 for 247 yards, and the Broncos managed 94 rushing yards. Andrew Billings had a team-high seven tackles.

A blocked field goal from Crosby. AJ Cole averaged 46.8 yards on four punts, once pinning Denver inside its 10-yard line. And field goals of 52, 57 and 25 yards from Daniel Carlson. But a streak also ended for the Pro Bowl kicker. Carlson had made 41 straight attempts — three off tying the NFL’s all-time record — when he missed from 46 yards in the second quarter. Weird note: All three of Crosby’s three career blocked kicks have come against the Broncos.

The team that admittedly lacked energy in recent weeks had more than enough Sunday, hurting itself with penalties and yet overcoming them to win its first one-score game of the season. Josh McDaniels and his staff were by far the better side after intermission, and his play-calling in overtime allowed Carr to air things out and eventually win the team’s third game.