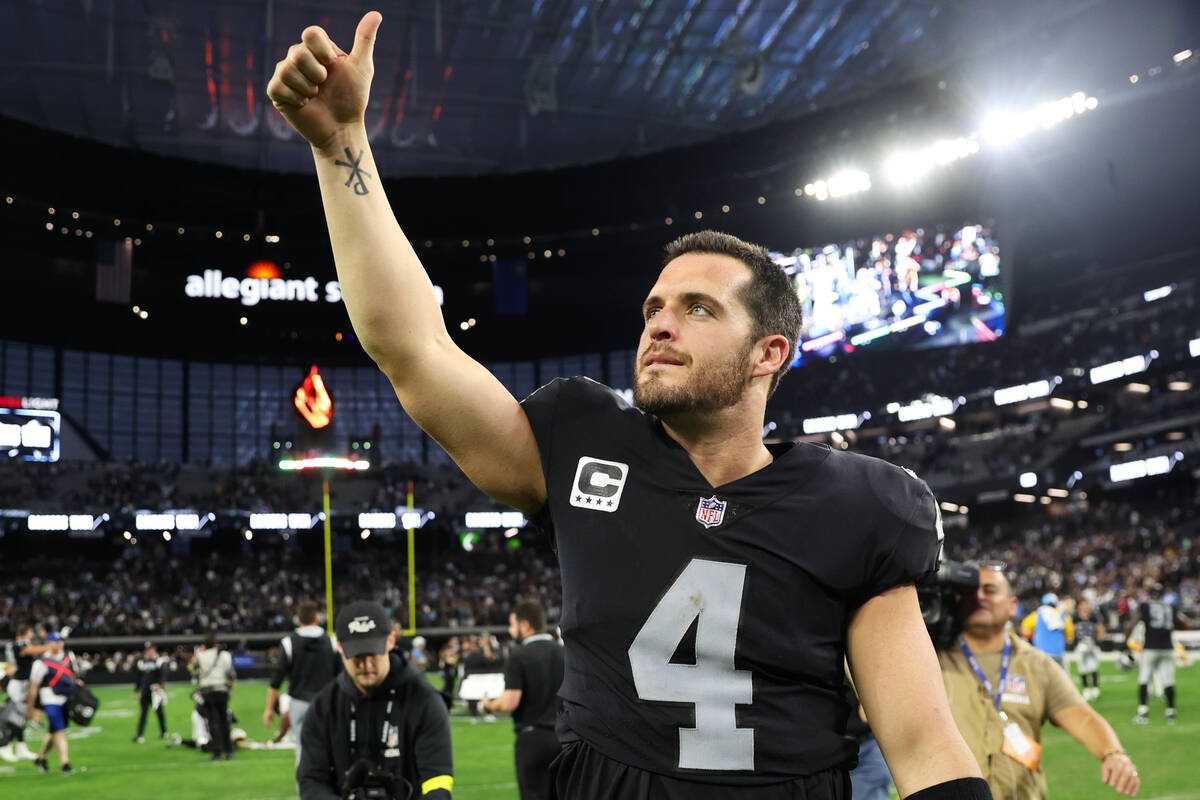 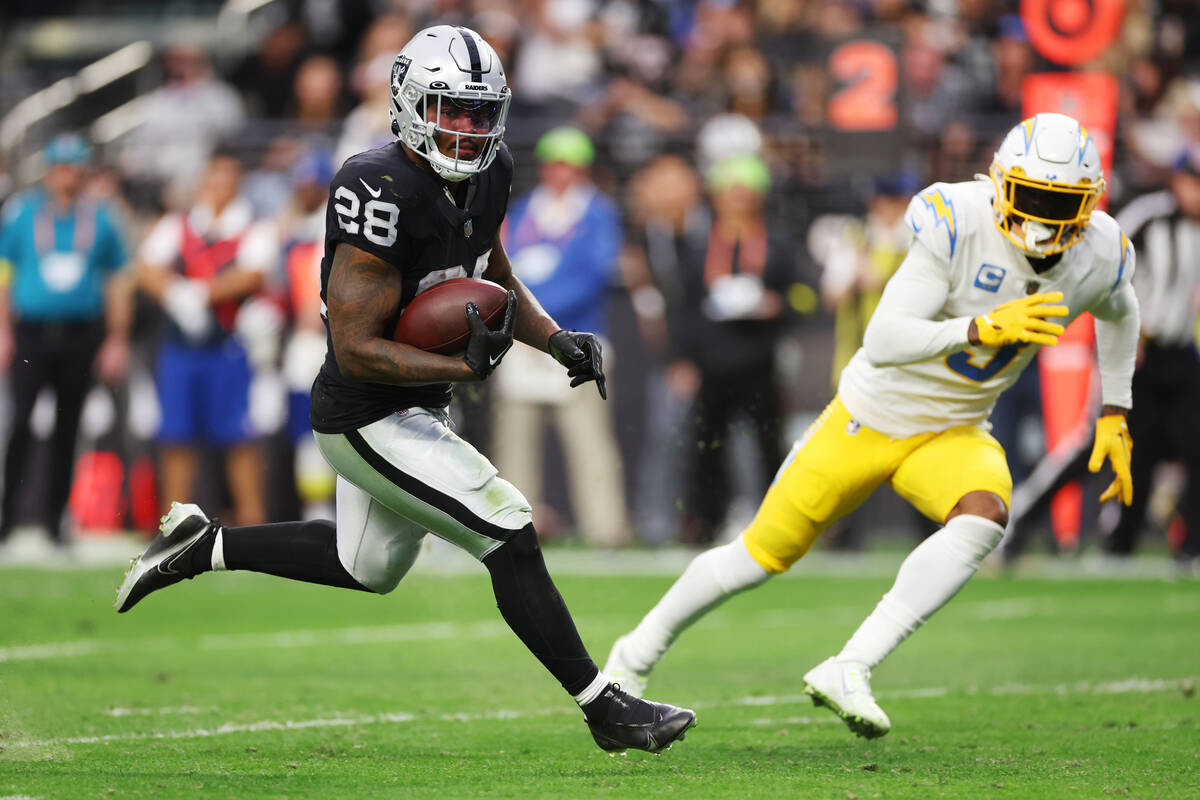 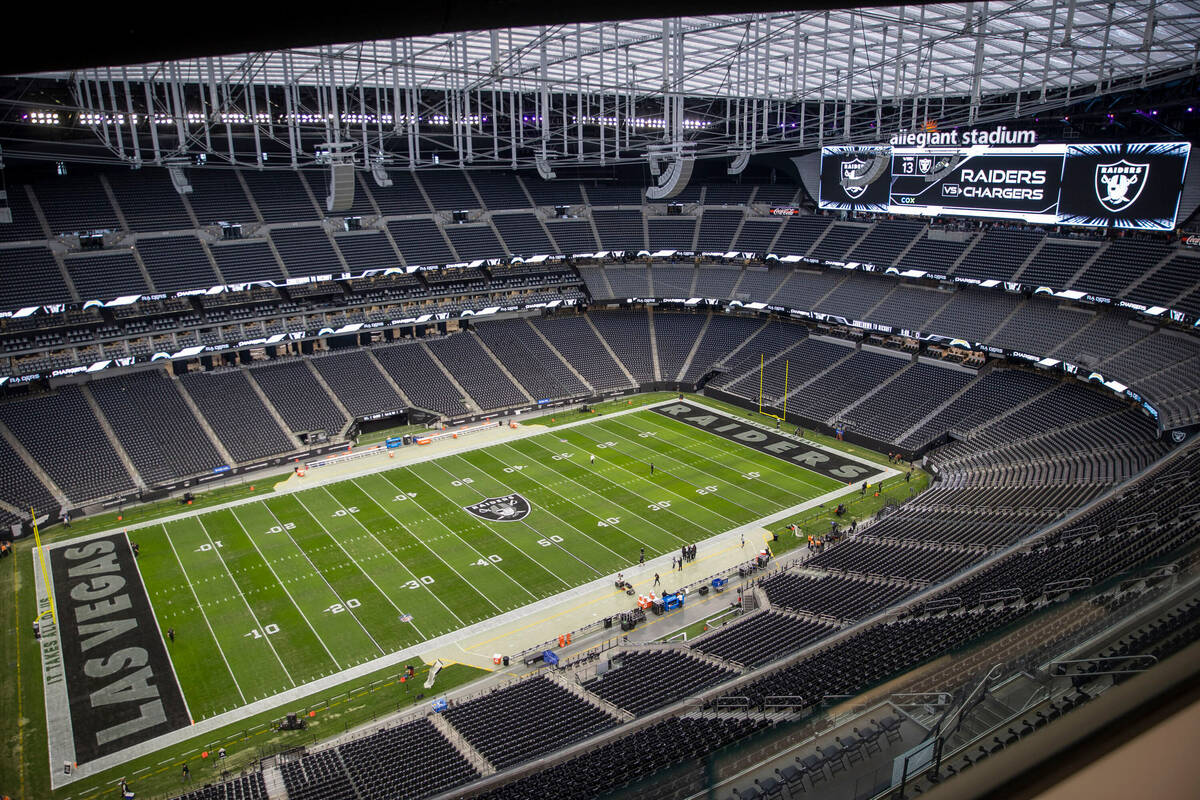 An overview of Allegiant Stadium before an NFL game at between the Los Angeles Chargers and the Raiders on Sunday, Dec. 4, 2022, in Las Vegas. (Heidi Fang/Las Vegas Review-Journal) @HeidiFang

How the Raiders performed in a 27-20 win over the Chargers on Sunday at Allegiant Stadium:

It was great after a forgettable start with a Josh Jacobs fumble and then a pick six of quarterback Derek Carr on a throw that was tipped. But then things got rolling, and the Raiders hit the Chargers in the mouth with big plays. Jacobs rushed 26 times for 144 yards and a touchdown, and Carr finished 16 of 30 for 250 yards and two scores. Both went to wide receiver Davante Adams, who had eight catches for 177 yards and touchdowns of 31 and 45 yards. The Raiders totaled 404 yards on 59 plays compared with 74 snaps for the Chargers.

There was a difference up front. A certain type of energy chasing around Chargers quarterback Justin Herbert. After a season of struggling to reach any quarterbacks, big-time free-agent signing Chandler Jones came through with three sacks after totaling one-half in the first 11 games. The edge rusher also had five tackles (two for loss). Cornerback Nate Hobbs returned to the lineup from injury and was terrific with a team-best eight tackles and a fumble recovery. Linebacker Denzel Perryman added seven tackles (one for loss) and a quarterback hit. One blemish came in the fourth quarter, when Herbert hit Keenan Allen for a 35 -yard score on fourth-and-12.

Daniel Carlson made field-goal attempts of 55 and 25 yards but missed from 52. It was his first miss at Allegiant Stadium after 47 straight makes. AJ Cole averaged 45.3 yards on four punts (with a long of 60) and had two downed inside the 10.

Josh McDaniels realized often that there is no better strategy than feeding the likes of Jacobs and Adams time and again. His two best offensive players didn’t let him down. Also, with the Raiders continuing to gain positive yards on the ground, McDaniels called for a third-quarter flea-flicker for a score that pushed the lead to 24-13. Huge moment. Great call.