The Raiders led 25-14 early in the fourth quarter before the Miami Dolphins rallied to force overtime with two seconds left. The Raiders would go on to win 31-28. (Le'Andre Fox/Las Vegas Review-Journal) 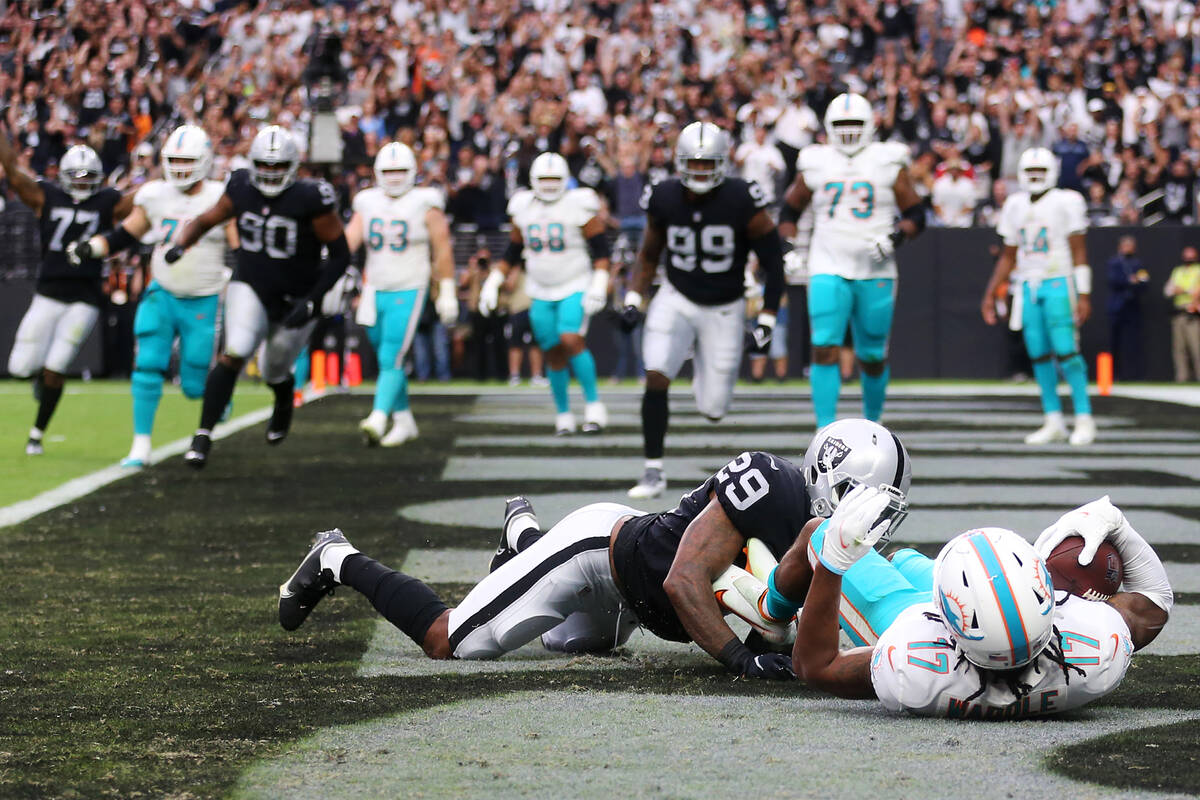 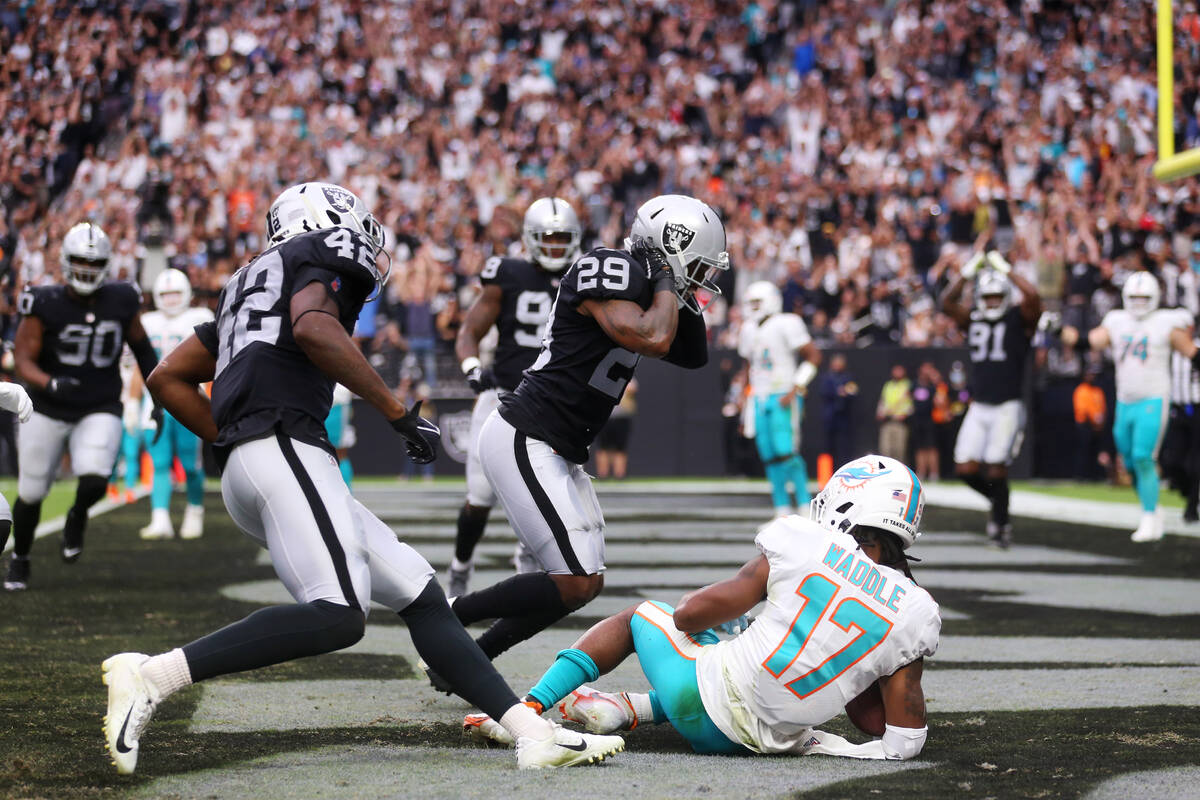 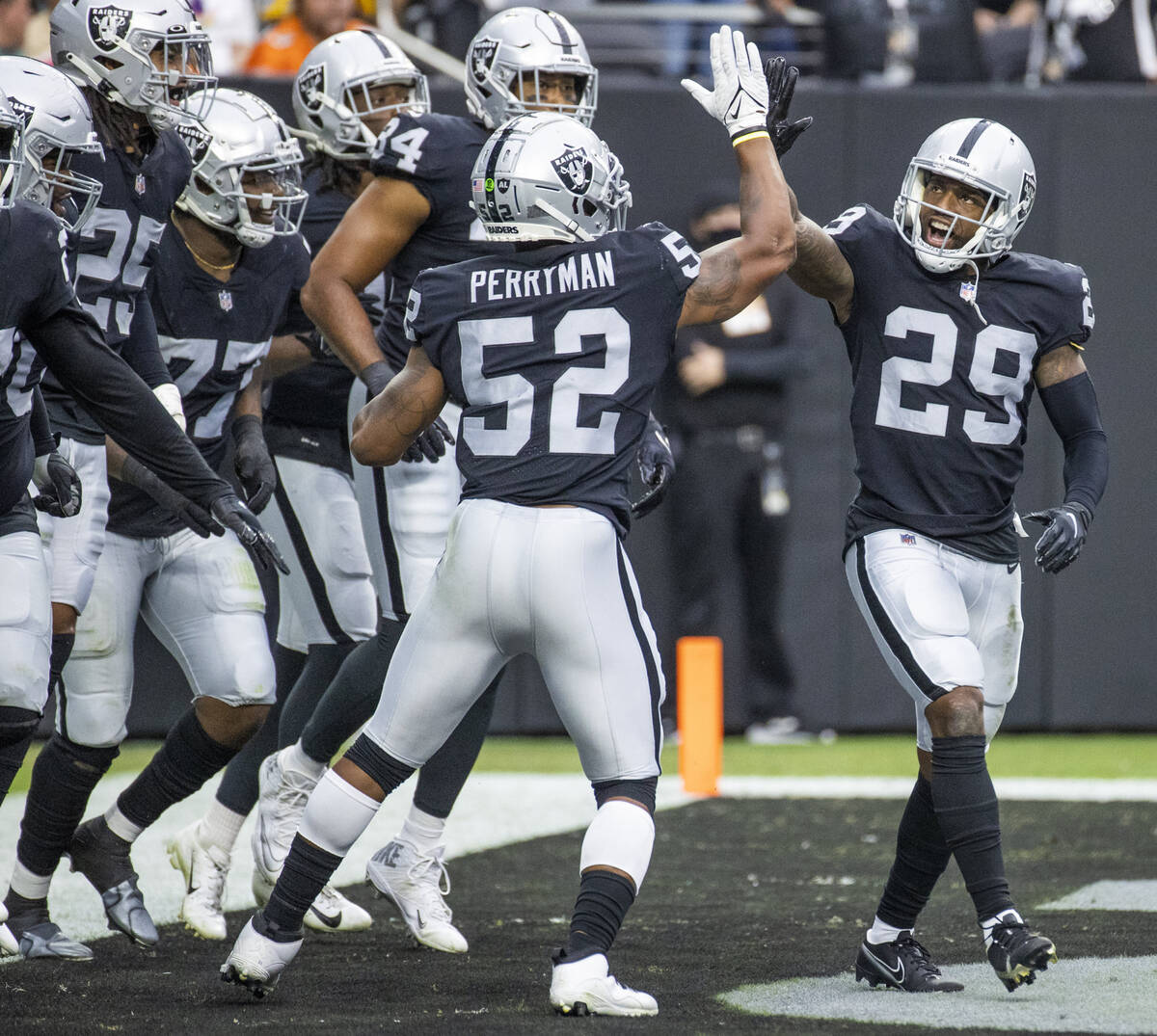 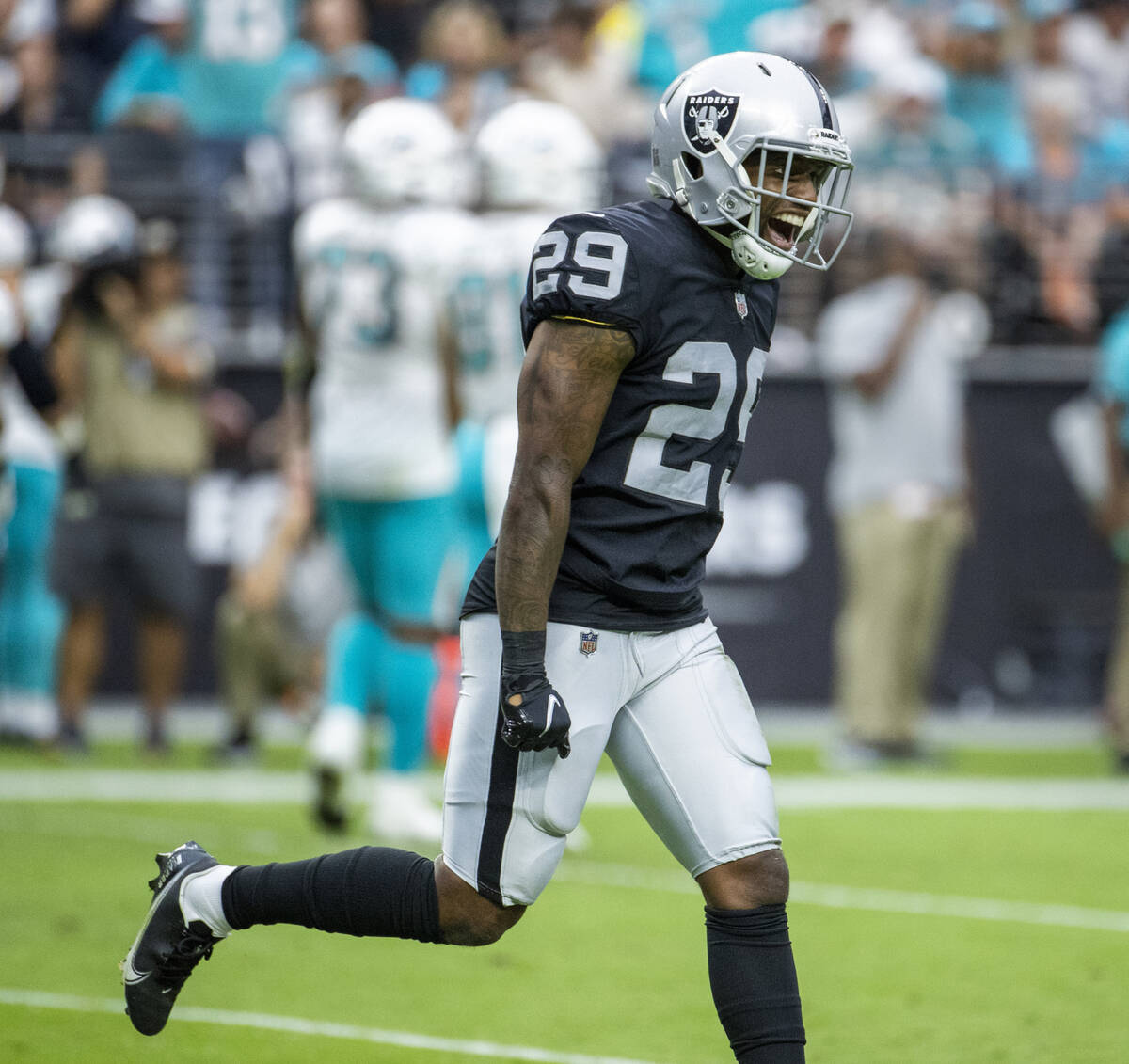 Las Vegas Raiders cornerback Casey Hayward (29) is pumped after a safety during the first half of their NFL game versus the Miami Dolphins at Allegiant Stadium on Sunday, Sept. 26, 2021, in Las Vegas. (L.E. Baskow/Las Vegas Review-Journal) @Left_Eye_Images 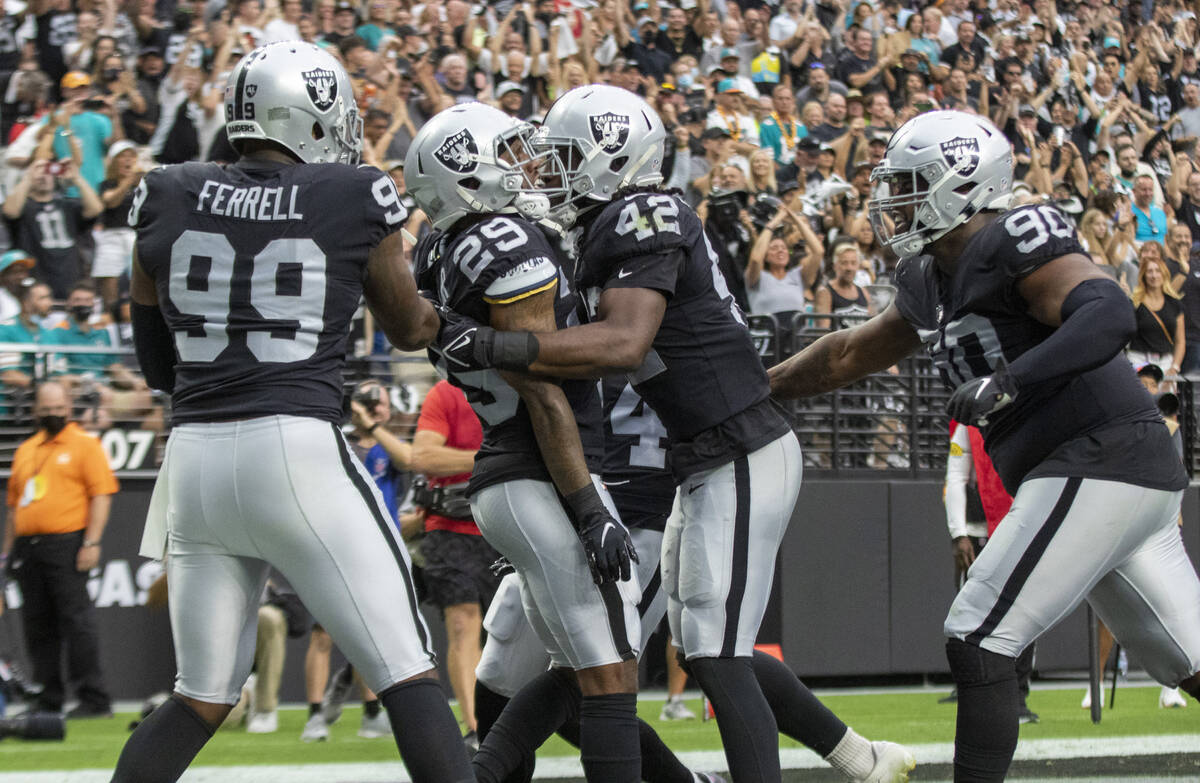 Cornerback Casey Hayward Jr. was just fine allowing his first reception in a Raiders’ uniform late in the first quarter of his third game with the team.

Hayward made an open-field tackle on Jaylen Waddle on the play for a safety that turned the game around after the Raiders trailed 14-0 on Sunday at Allegiant Stadium.

“Right before that play, I told (cornerback Trayvon Mullen), someone has to make a play,” Hayward said after a 31-28 overtime victory. “It just happened to be me. After that, we kind of got it going. That’s just what we do. We fought and won the game and came out victorious.

“I’m OK with that being the first reception allowed. We put some points on the board.”

Hayward said it was the first safety he had recorded in the NFL, but the play also made history.

It was the first completed pass play in modern league history to result in a safety without a penalty or fumble on the play. Hayward said it was a fortunate coincidence.

“I was trying to just do my job,” he said. “I actually probably shouldn’t have been there, but it ended up being a good play for me being in the right spot at the right time. I was just trying to read and react and go make a play.”

Hayward has been a revelation and a major reason the defense has turned things around after a dismal 2020 season to help the Raiders to their first 3-0 start since 2002.

He’s not alone. The defensive line has generated consistent pressure, and the linebackers and safeties are doing a better job tackling. Both of those aspects have helped make new coordinator Gus Bradley’s system look even more effective.

Mullen might have had his best game as a pro Sunday. Even when he made a mistake, the third-year pro out of Clemson bounced back.

He committed pass interference late in regulation that led to the game-tying score and briefly left the game with an injury.

When he came back on the field to start overtime, the Dolphins tested him deep twice. He responded both times, breaking up what would have been huge gains.

“He answered the call all game,” Hayward said. “He’s one of those guys I think can be elite, and I think he played elite. He got a lot of targets, and I don’t think many were caught. He’s taking that step you should take in year three.”

The win came despite quarterback Derek Carr’s early interception that was returned for a touchdown by Elandon Roberts.

The Raiders had been 0-10 in games Carr had thrown a pick-six.

While it appeared tight end Foster Moreau stopped short on the route, Carr said it was his fault.

“He was running a shallow cross, and I had a defender in my face,” he said. “I didn’t want to take a sack down in there that close, so I kind of tried to guess what he was going to do before he made his decision, and it was my fault. I should have just thrown the ball away.”

The Raiders had lost 19 straight games when an opponent returned an interception for a touchdown, dating to 2005.

The Raiders and AFC West rival Denver have opened the season 3-0, but not all three-game winning streaks are created equal.

The Raiders are the first team in history to open a season 3-0 with all three wins against teams that won 10 or more games in the previous season.

The Broncos have defeated the Jets, Giants and Jaguars. Those teams are a combined 0-9.

Center Andre James appeared to settle in with his shotgun snaps after a few of them early made Carr reach and one sailed over his head.

It was the second time a snap has been airmailed this season, leading to a negative play.

On Sunday, Carr was able to throw the ball away only to be whistled for intentional grounding and a loss of 18 in the first quarter.

“It’s time on task,” Carr said of perfecting the snaps. “I promise you we work on it, but he’s also got big dudes in front of him. … I told him, ‘I’m sorry, I just didn’t have the hops today.’”