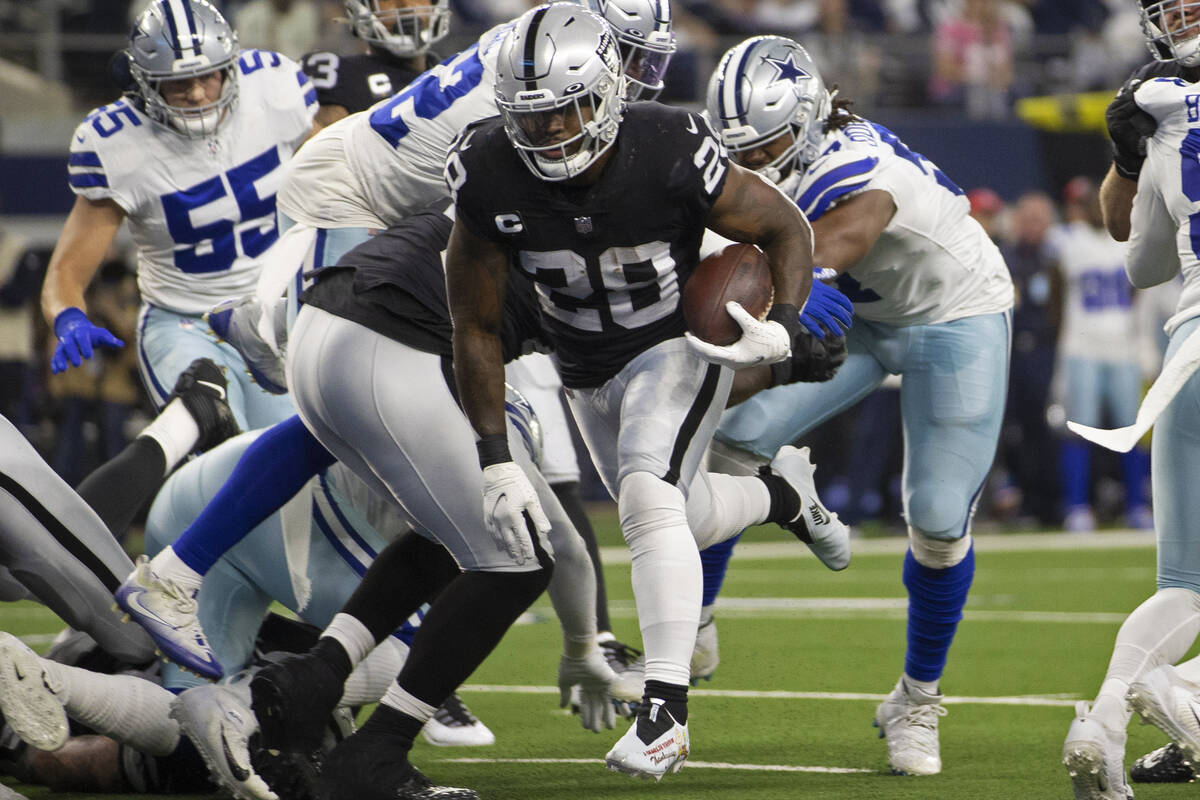 Raiders running back Josh Jacobs (28) leaps into the end zone in the first half during an NFL football game against the Dallas Cowboys on Thursday, Nov. 25, 2021, at AT&T Stadium, in Arlington, Texas. (Benjamin Hager/Las Vegas Review-Journal) @benjaminhphoto

Raiders cornerback Nate Hobbs is having an outstanding rookie season despite falling all the way to the fifth round in the draft. According to Pro Football Focus, Hobbs has been on the field for 385 coverage snaps without allowing a touchdown this season.

Only teammate Casey Hayward Jr. (417) has had more coverage snaps without allowing a score.

Hobbs gave a great deal of credit to Hayward as a mentor, but also cited the work the defensive line has done in generating pressure so the secondary doesn’t have to cover for very long.

“It’s complementary football,” Hobbs said. “They help us. We help them.”

He’d like to show his appreciation to the pass rushers, but they’ll have to settle for his praise.

“If I would have gone higher in the draft, I would have taken them out to dinner a long time ago,” he said in jest. “But I have to save up.”

Running back Josh Jacobs, who had a season-high 87 rushing yards against the Cowboys, was added to Thursday’s injury report with a limited practice session due to an ankle injury. His name did not appear Wednesday, suggesting it’s a new ailment.

Wide receiver DeSean Jackson was also downgraded from limited to no practice with what he dubbed a calf spasm, though he sounds optimistic he will be able to play on Sunday.

Linebacker Nick Kwiatkoski and cornerback Keisean Nixon both got in limited sessions for the second consecutive day after missing the last three games with ankle injuries.

Cornerback Trayvon Mullen was on the practice field Thursday and has been designated for return from injured reserve.

The move starts a 21-day clock for the Raiders to activate Mullen or keep him on IR for the rest of the season. He has been out since injuring his toe during a loss to the Chargers on Oct. 4.

Wide receiver Dillon Stoner, who had played 56 snaps on special teams the last four games, was waived by the Raiders on Thursday.

Fluker is a former first-round pick of the Chargers who was signed to the Raiders’ practice squad on Oct. 20. He did not appear in a game.

Frazier was a sixth-round pick of the Cowboys in 2016 and played in 44 games over four seasons with Dallas. The 27-year-old appeared in 15 games for the Dolphins last season and was released by the Bengals during training camp in August.

According to NextGen stats from Zebra Technology, Yannick Ngakoue (55) and Maxx Crosby (53) are first and second in the league in quarterback pressures this season.

But while Ngakoue has eight sacks over his last seven games, Crosby has failed to register any since a three-sack game against the Broncos on Oct. 17.

Defensive coordinator Gus Bradley isn’t at all worried about the drought.

“They’re both playing at such a high level,” Bradley said. “We look at it more as the impact we have on the quarterback. Maxx is playing at an extremely high level right now. It’s like takeaways, we say they come in bunches. Just keep doing what you’re doing and they’ll come.”