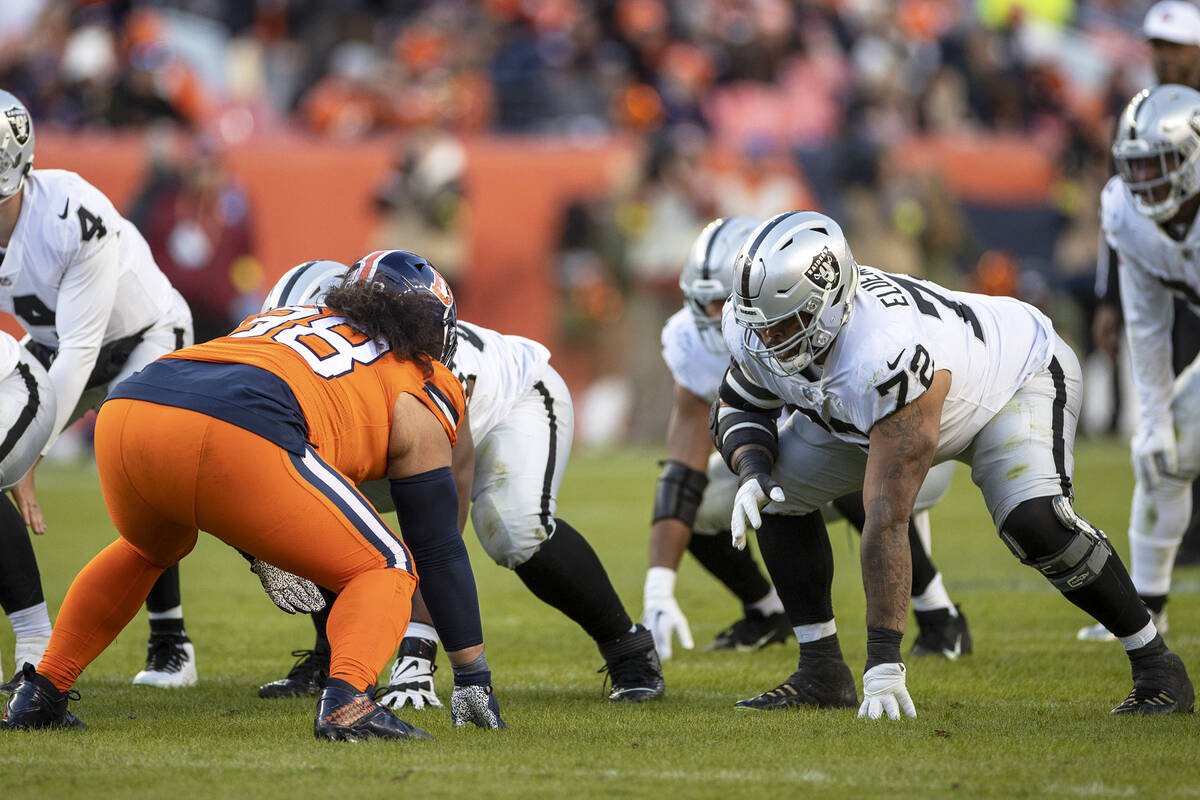 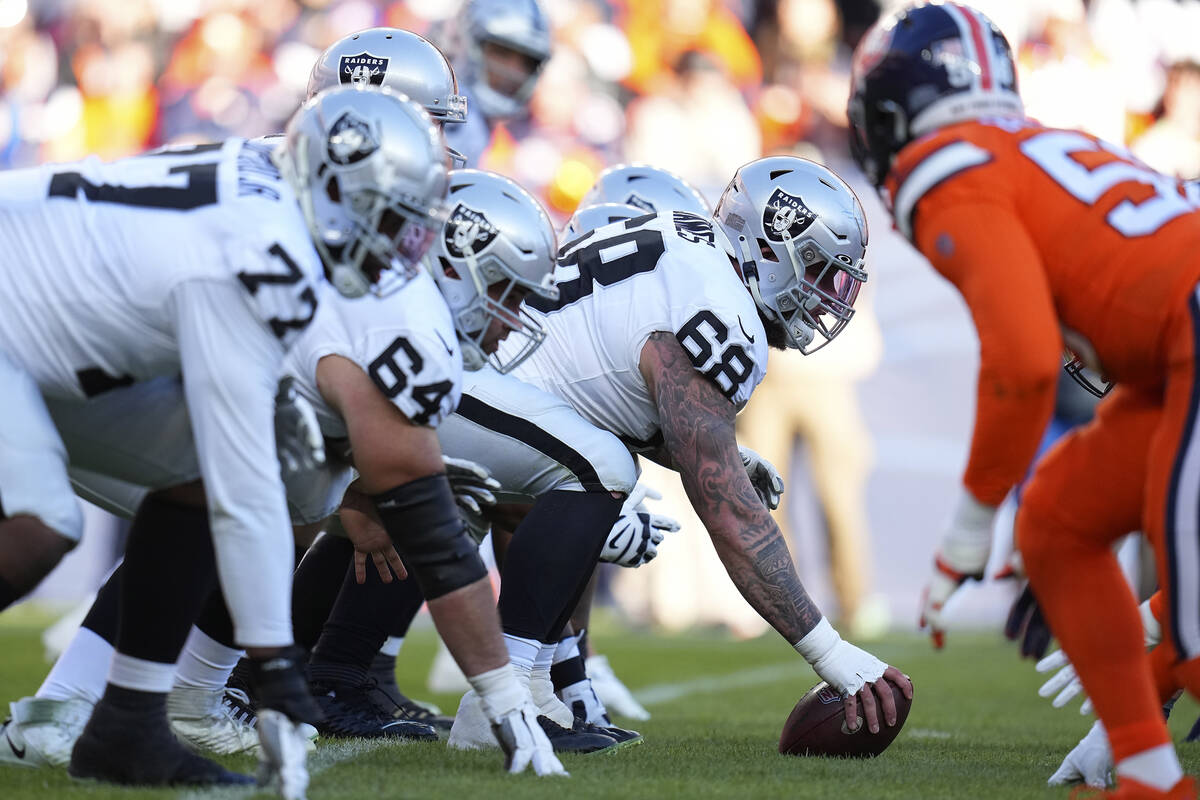 Las Vegas Raiders center Andre James (68) centers the ball at the line of scrimmage during an NFL football game against the Denver Broncos in Denver, Sunday, Nov. 20, 2022. (AP Photo/Jack Dempsey) 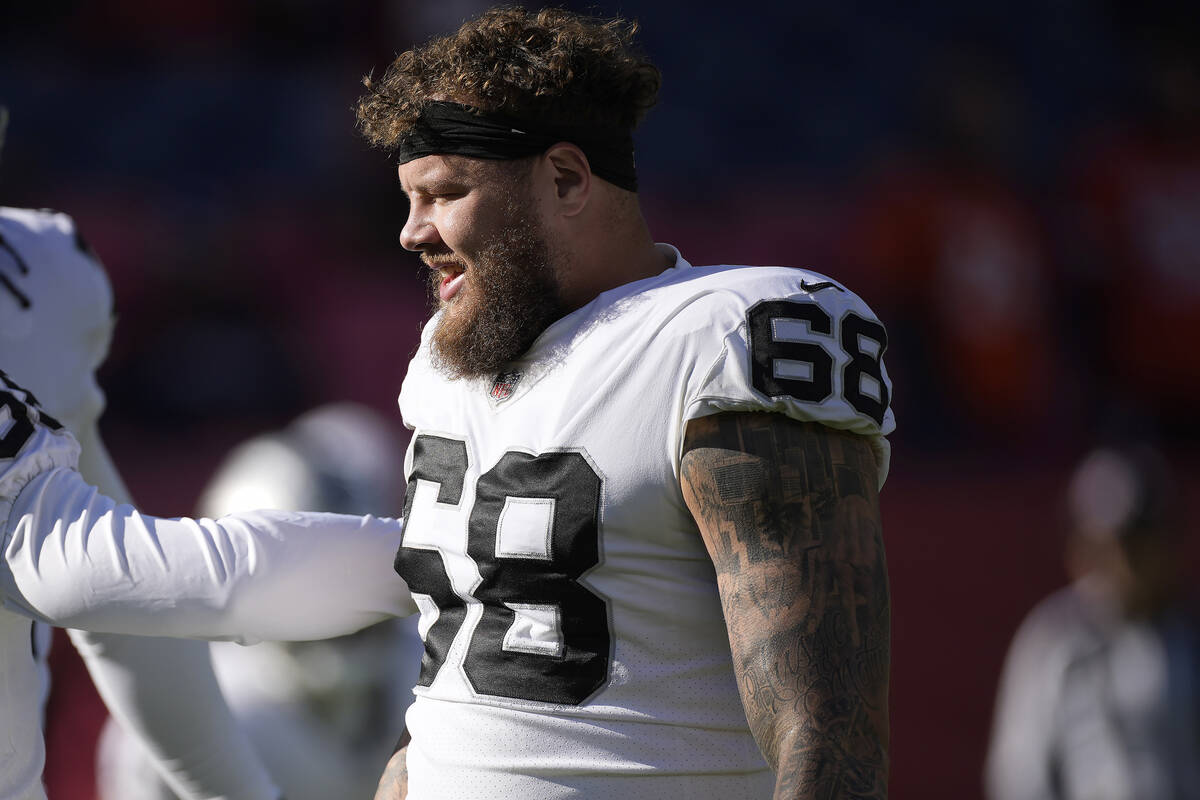 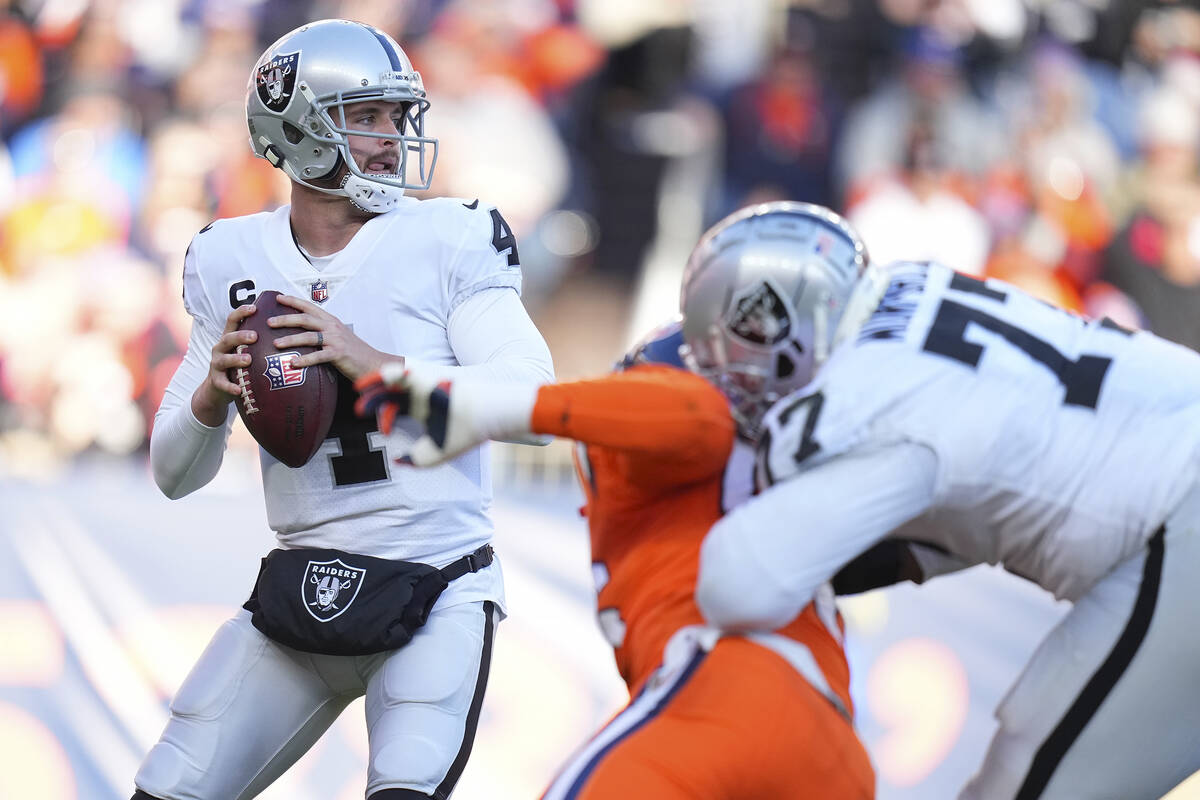 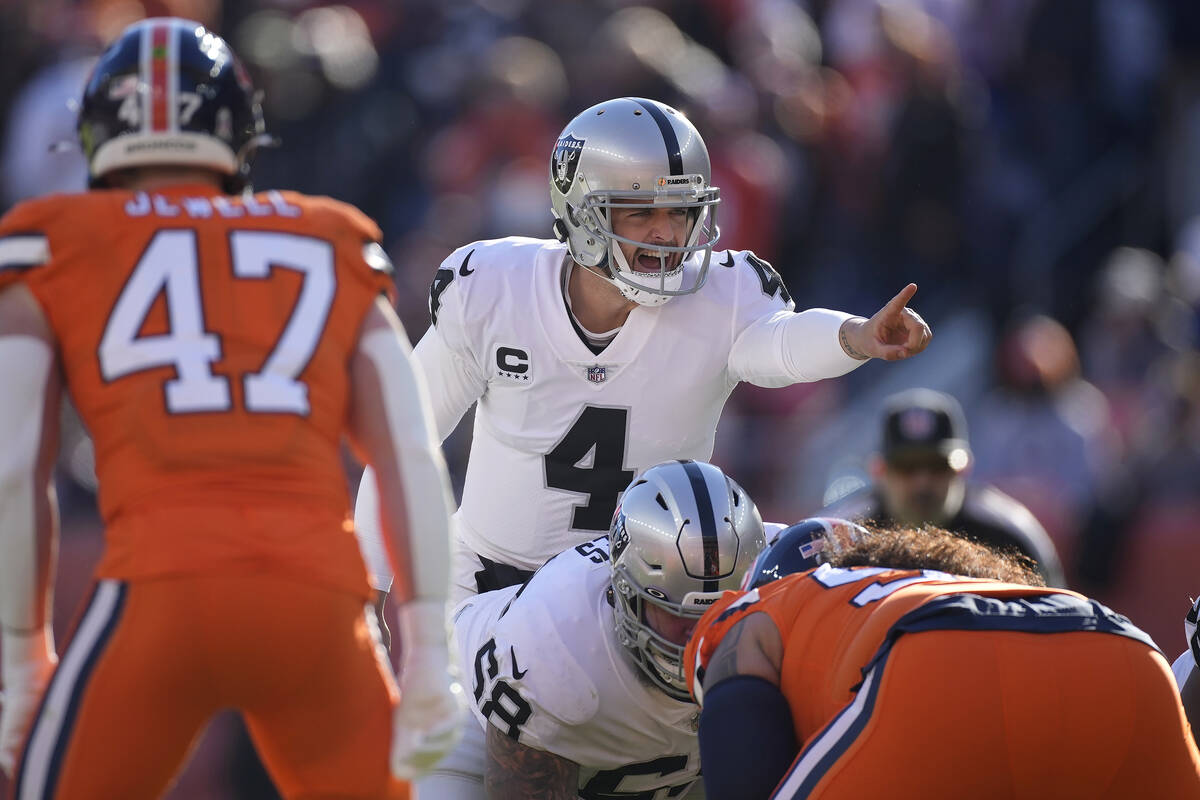 Las Vegas Raiders quarterback Derek Carr (4) signals at the line of scrimmage during the first half of an NFL football game against the Denver Broncos in Denver, Sunday, Nov. 20, 2022. (AP Photo/David Zalubowski) 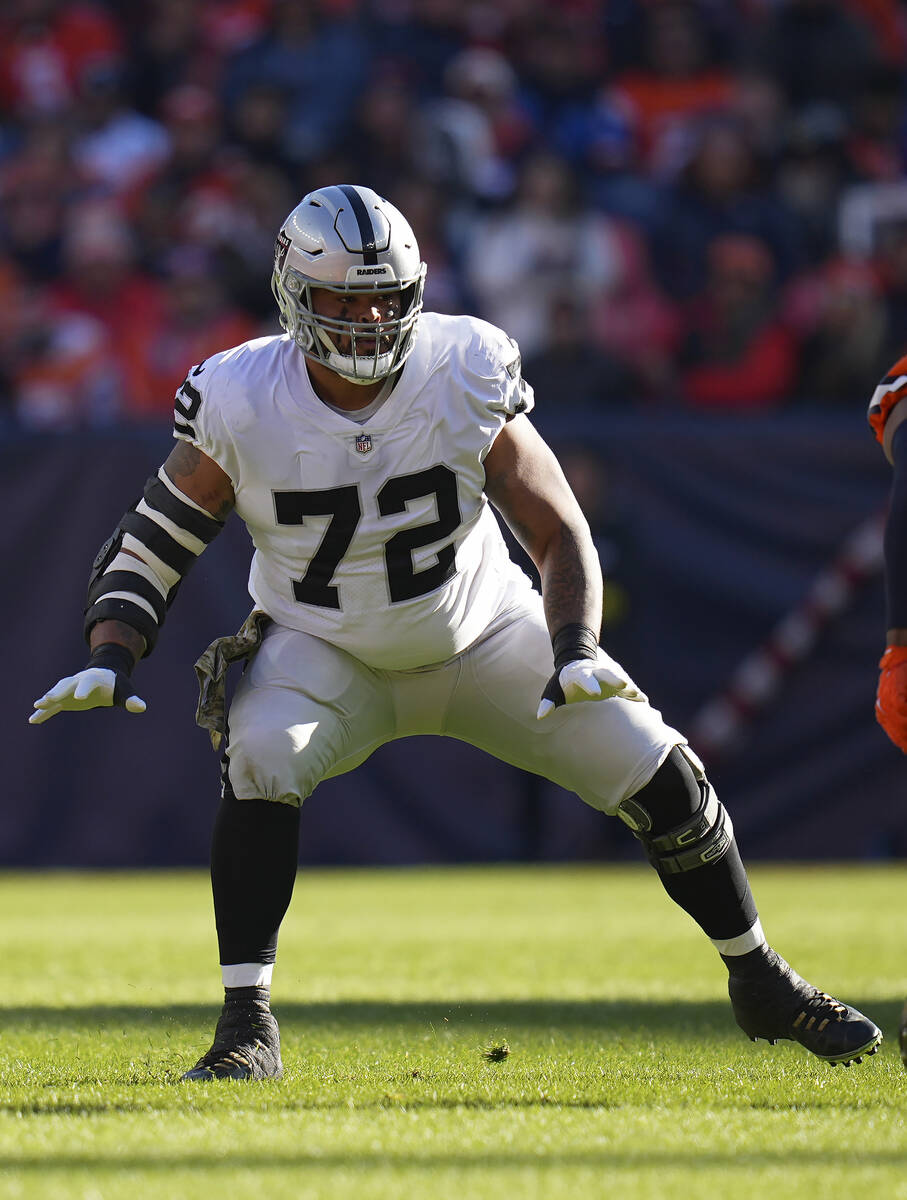 Las Vegas Raiders guard Jermaine Eluemunor (72) against the Denver Broncos during the first half of an NFL football game in Denver, Sunday, Nov. 20, 2022. (AP Photo/Jack Dempsey) 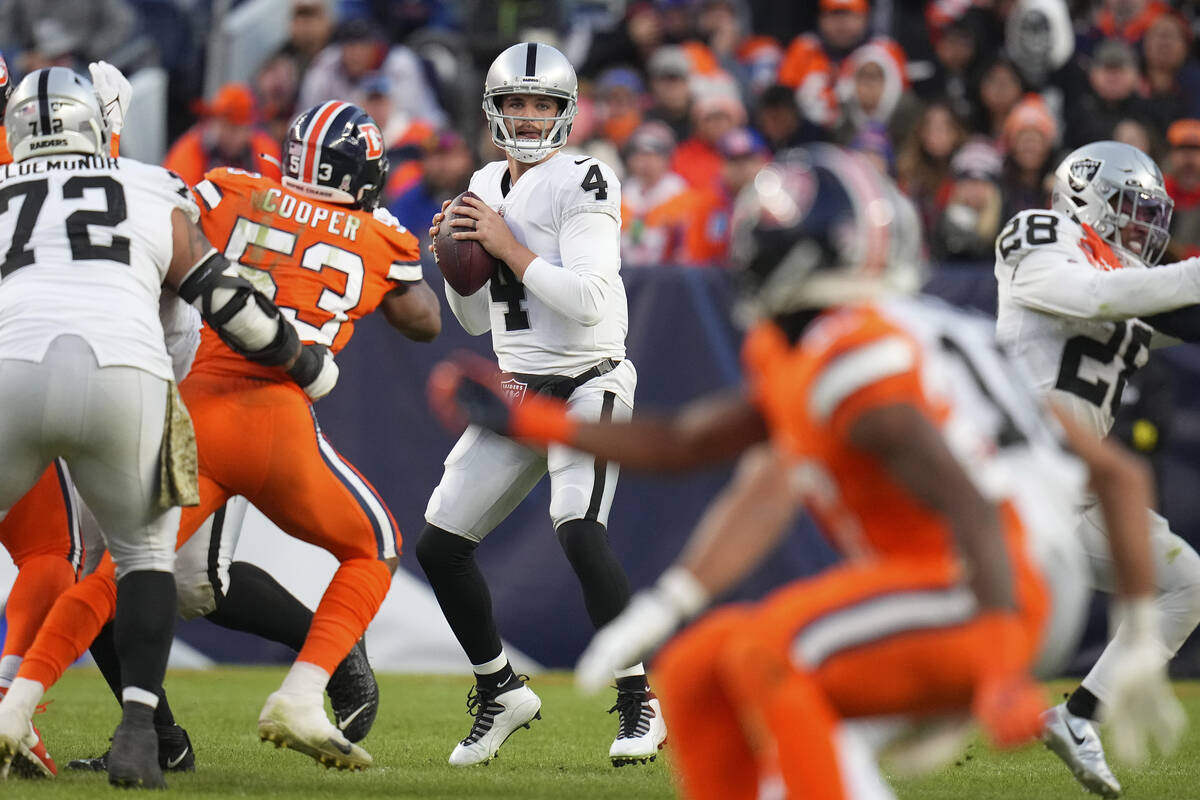 It was expected to be a devastating blow to an offensive line that has struggled for most of the season. Miller is without question the Raiders’ best offensive lineman and one of the best left tackles in the NFL.

But disaster was averted after a solid day from Jermaine Eluemunor, who flipped from right tackle to left, and an equally strong day from rookie Thayer Munford, who took over for Eluemunor on the right side.

The Raiders surrendered just one sack on 37 pass drops by Derek Carr. And the offensive line helped Josh Jacobs run for 109 yards.

Eluemunor, in particular, came up big.

“I am so happy for (Eluemunor),” Carr said. “If there’s one guy that gets, you know, jokes at him all the time, it’s him, but he always comes to work.”

Eluemunor has moved all around the offensive line this season, spending time at guard and tackle. In the process, he’s quietly put together a solid season.

“Whatever you ask him to do … play guard … play tackle,” Carr said. “The confidence he has, the level of his play since he got here to where it is now, I’m just so proud of him. I need him, and he stepped up in a mighty big way.”

A day after Tyler Hall was elevated from the practice squad to the game-day roster, the young cornerback was thrust into an expanded role Sunday.

Hall had three tackles, including a sack of Russell Wilson. The sack, incidentally, moves him ahead of defensive end Chandler Jones in that category.

Hall, whom the Raiders signed in early October to the practice squad, played at Wyoming and has played with the Falcons and Rams in the first two years of his career

“I just wanted to capitalize on my opportunity. Just trying to make the most of it,” Hall said. “Getting that sack was (exciting). There’s things I need to improve on, but it’s all about getting the win. Big game, division game, trying to get our feet back on track. We all fought together today to the end of the whistle.”

After claiming veteran defensive tackle Jerry Tillery off waivers Tuesday, the Raiders immediately got the former first-round pick of the Chargers onto the field.

Tillery was credited with just one tackle, but he provided a consistent interior pass rush, something the Raiders have been missing, and his presence helped free up Maxx Crosby to make plays.

“These coaches and the guys on the team have accepted me and brought me along,” Tillery said. “I got a small bite of the apple relative to the playbook this week, and I have to earn that trust. I have to earn the trust of the coaches and my teammates, and they’ll be able to have the whole pie, to extend my metaphor.”