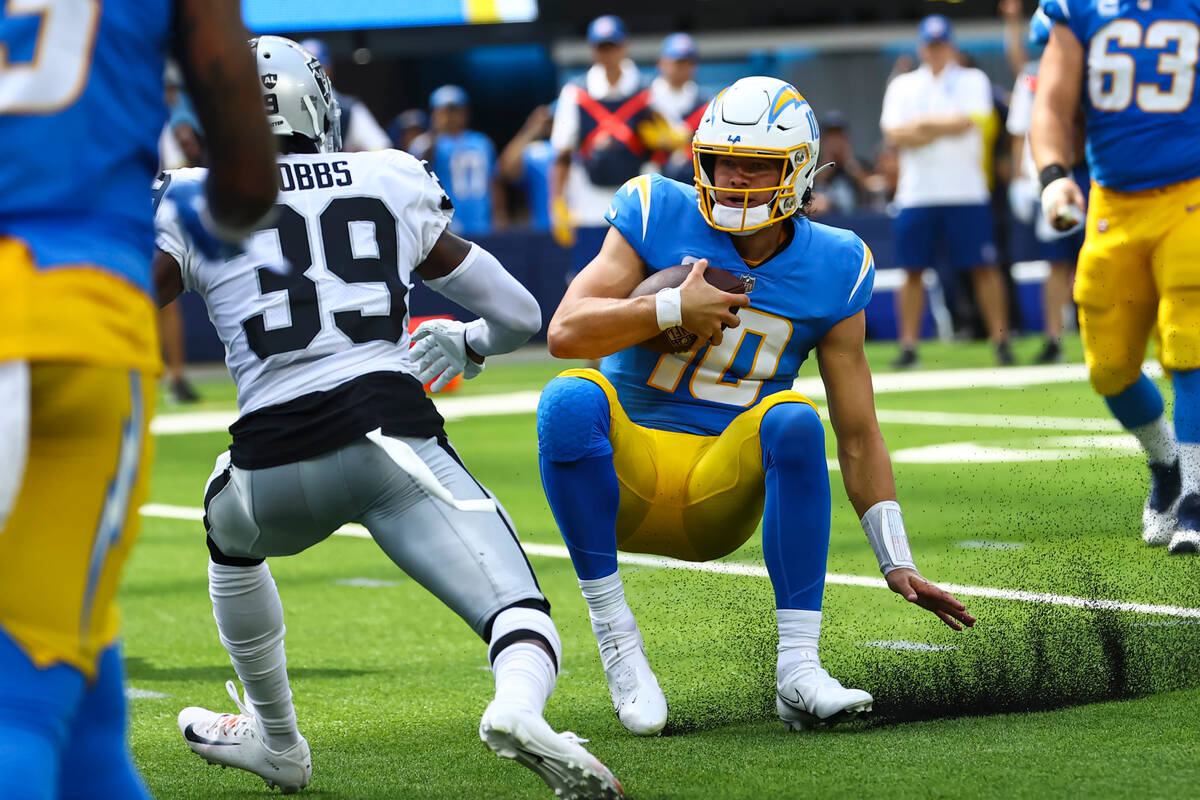 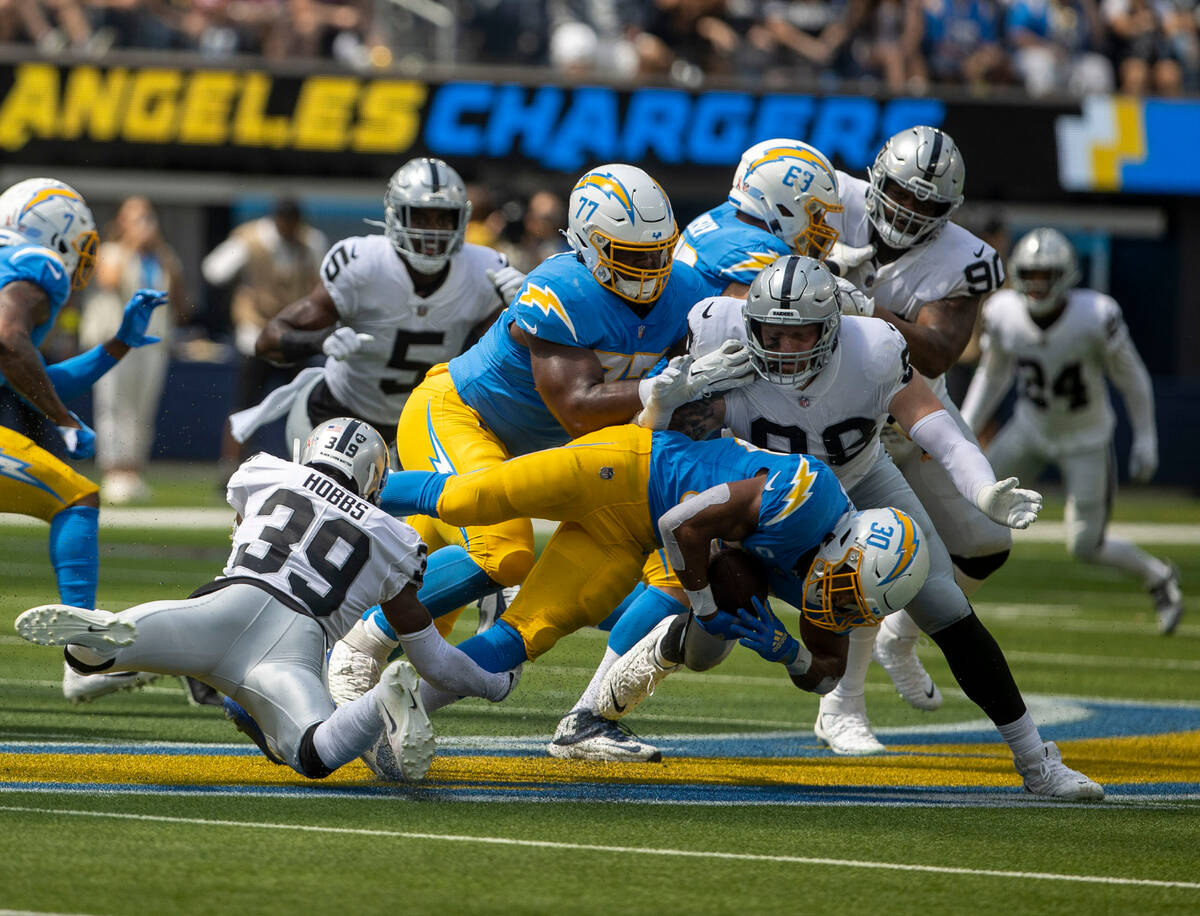 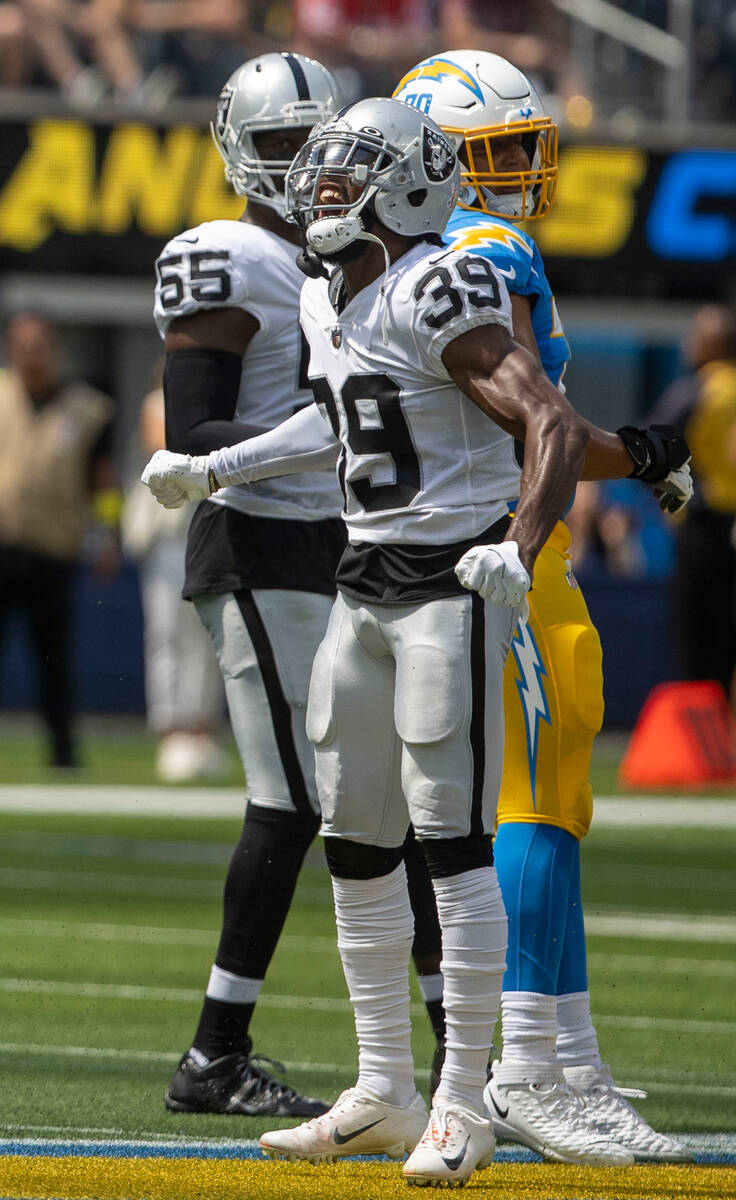 Raiders cornerback Nate Hobbs (39) celebrates a big play during the first half of an NFL game against the Los Angeles Chargers at SoFi Stadium on Sunday, Sept. 11, 2022, in Inglewood, Calif. (Heidi Fang/Las Vegas Review-Journal) @HeidiFang

“We get so much love and support every time we play at SoFi,” said Hobbs, who will play there for the fourth time when the Raiders meet the Rams on “Thursday Night Football.” “There’s so many Raiders fans in LA. We’re expecting a great turnout as always. I love playing there. It’s a fun place. Great vibes, great fans. It’s always a great battle.”

Along with the fan support in Los Angeles, Hobbs will always remember SoFi as the location of his first NFL interception.

During a 2021 preseason game against the Rams, he tracked down a deep Bryce Perkins pass intended for Tutu Atwell and came away with the ball for a turnover.

Perkins could be in line to start for the Rams on Thursday, but Hobbs and Amik Robertson said they’re more focused on their defensive scheme than who is taking snaps.

Robertson, the first person to jump on Hobbs in celebration after that interception last season, always likes hearing Raiders fans at road games.

“We have one of the best fan bases in the world,” he said. “We went to Seattle a few weeks ago and thought we might be by ourselves, but we walk outside and the Raiders fans are all up in there. SoFi is always a great place to go back where some of our old-school Raiders fans are at.”

The results have been mixed at SoFi. The Raiders are 1-2 against the Chargers and 1-0 (a preseason game) against the Rams.

They are looking to move to the positive side of the ledger Thursday and could have a healthy percentage of the fans cheering for them, especially with the Rams struggling and several star players not expected to play.

“L.A. definitely has a lot of Raider fans,” defensive end Maxx Crosby said. “So we love it out there, and it will be awesome to see them.”

Peko has been activated for three games, including the past two. He’s one of the players Crosby credited with getting some push on the interior that has helped free the outside pass rushers in recent weeks and improved the run defense.

The 29-year-old played in 21 games with three teams before this season, including three starts in eight games for the Titans in 2021.

Vickers was in his third season with the Raiders and had played in 25 games, including two starts. He had missed the past three games with a back injury.

The Raiders filled Peko’s place on the practice squad with linebacker Austin Calitro, who has played in 52 games with five teams. He started two of the five games he played for the Giants this season.

The Raiders provided an estimated practice report Tuesday because they had a walk-through instead of a full practice.

Cornerback Tyler Hall drew a limited tag after being held out Monday with a back injury that caused him to miss Sunday’s game.

Running back Josh Jacobs drew a limited tag with the calf injury that has affectedhis practice schedule but not his performances on game day.

The team will hold another walk-through Wednesday before leaving for Southern California.

Raiders report: Clelin Ferrell gets chance to prove his worth