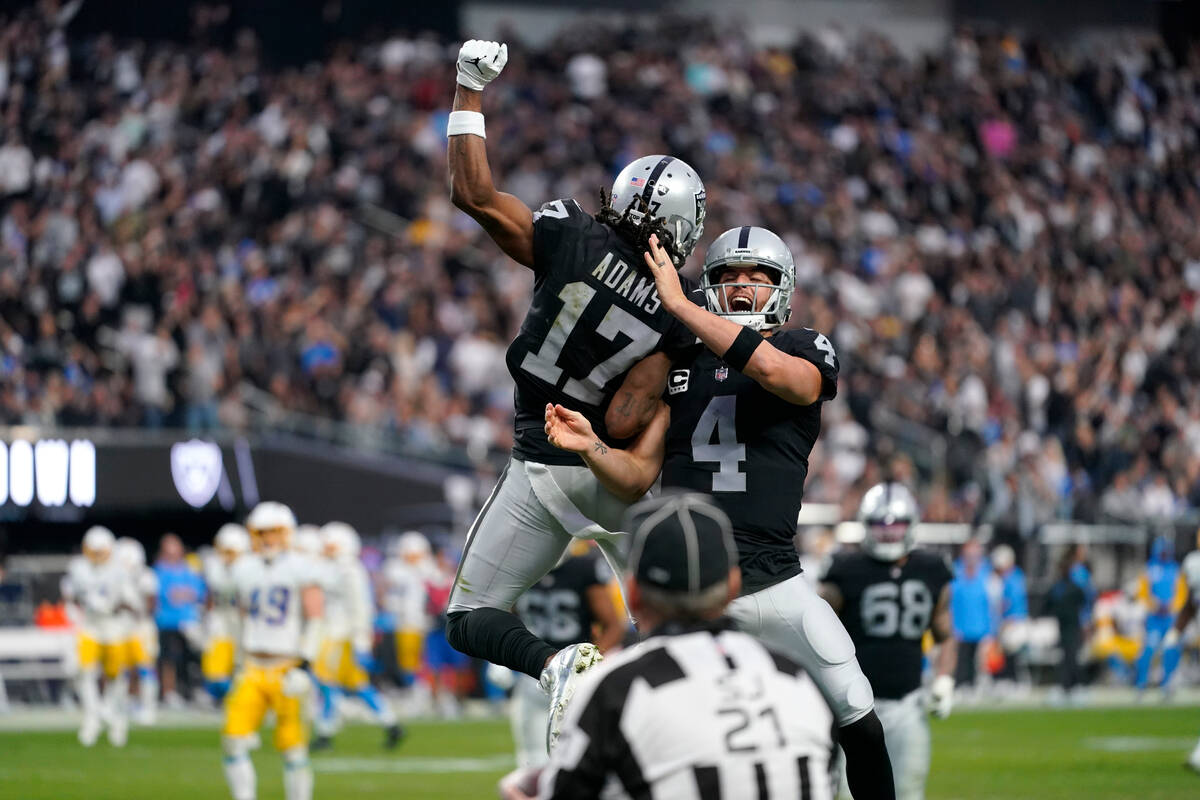 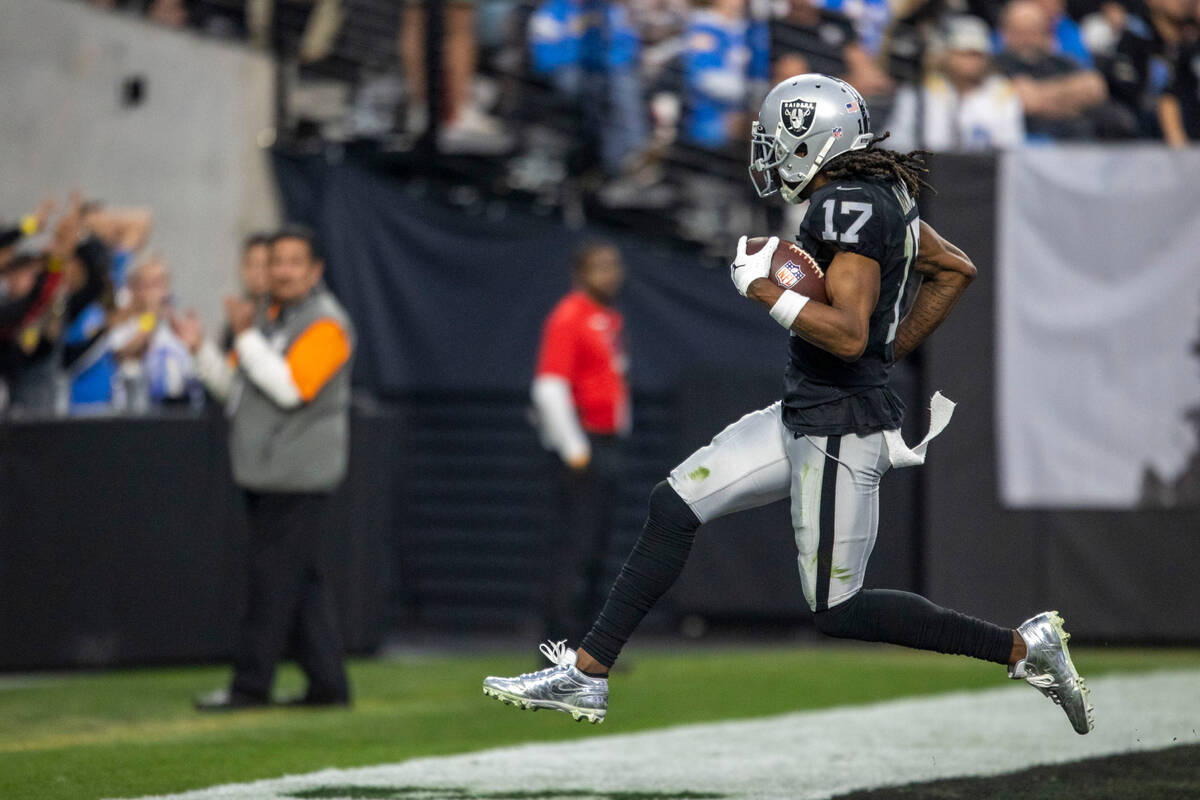 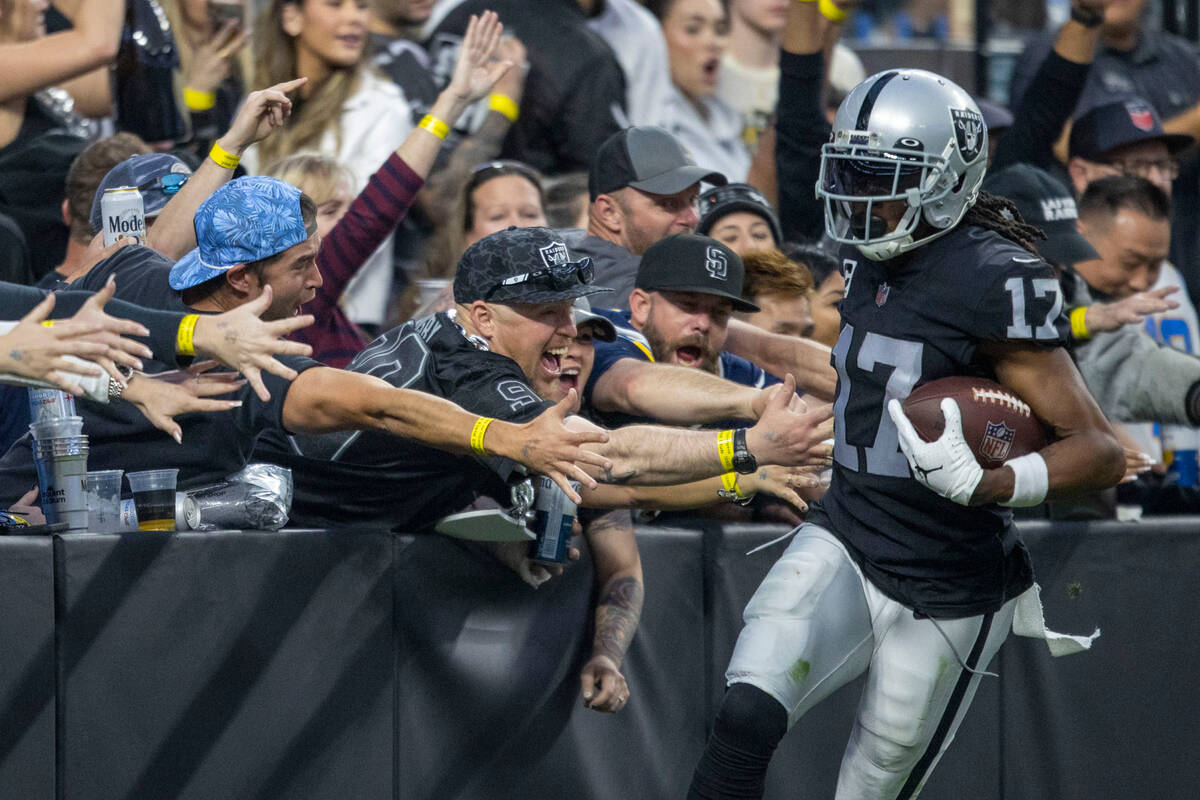 Raiders wide receiver Davante Adams (17) is congratulated by fans after scoring a touchdown during the second half of an NFL game against the Los Angeles Chargers at Allegiant Stadium on Sunday, Dec. 4, 2022, in Las Vegas. (Heidi Fang/Las Vegas Review-Journal) @HeidiFang

A play that used to be seen as a trick or gimmick has seemingly crept its way into being a staple of the Raiders’ offense.

Derek Carr has completed passes on flea-flickers in the past two games, including a 45-yard touchdown pass to Davante Adams in Sunday’s win over the Chargers.

“Anytime we have a shot called like that, where it’s a little bit of a change-up, it keeps them on their toes,” Adams said.

One of the reasons the play has been working is how effectively Josh Jacobs has been running the ball.

Jacobs, the NFL’s leading rusher, has been on a tear, so the defense is forced to commit each time he takes a handoff. So when he stops short of the line of scrimmage and tosses the ball back to Carr, who has a weapon such as Adams to throw to downfield, it ties the defense in knots.

“The biggest challenge is being patient, because you want the ball, especially once you see it open,” Carr said. “Then you start seeing them figure it out that it’s a flea-flicker, and then all eyes come to me.

“I think the challenge for them is when we stick the ball in his stomach, it’s like a big play action for us. And so, if we can execute them at a high level in practice, then it doesn’t feel like a trick kind of play for us.”

It requires more than just Jacobs and Carr to carry out fakes on the play. The receivers have to hold up and sell the run, as do the offensive linemen.

“That part is really important,” coach Josh McDaniels said. “Every guy has to do their part. And I thought our guys did a decent job. We had a little leakage in the protection on it at the very end, but we held up long enough.”

The Raiders will be without at least three defensive players when they play the Rams on “Thursday Night Football” at SoFi Stadium.

Jacobs (calf/quad) is listed as questionable for the third consecutive game. He played in both games. Cornerback Tyler Hall (back) also is questionable.

The Rams will be without star defensive tackle Aaron Donald (ankle).

Maxx Crosby credited the interior of the defensive line for the team’s recent improvements up front.

Players are getting healthy and more comfortable in their roles, and Crosby thinks the arrival of former first-round pick Jerry Tillery has been a major factor.

“He’s been a monster,” Crosby said. “I love him. The first day he practiced with us, we were just in helmets, and he was out there throwing people around. They had to try to slow him down a little bit, but that’s the guys you want. I feel like it’s the Raider way having guys who are a little out there, but willing to put their body on the line and do anything they can to win.”

Crosby has known Tillery for several years because they share an agent and trained together in preparation for the NFL scouting combine in 2019.

Players of the week

Defensive end Chandler Jones was named the AFC Defensive Player of the Week. He had a breakout game against the Chargers with three sacks, six tackles, two tackles for loss and a tipped pass.

Jacobs was named the FedEx Ground NFL Player of the Week for the second straight week. He rushed 26 times for 144 yards and one touchdown against the Chargers.