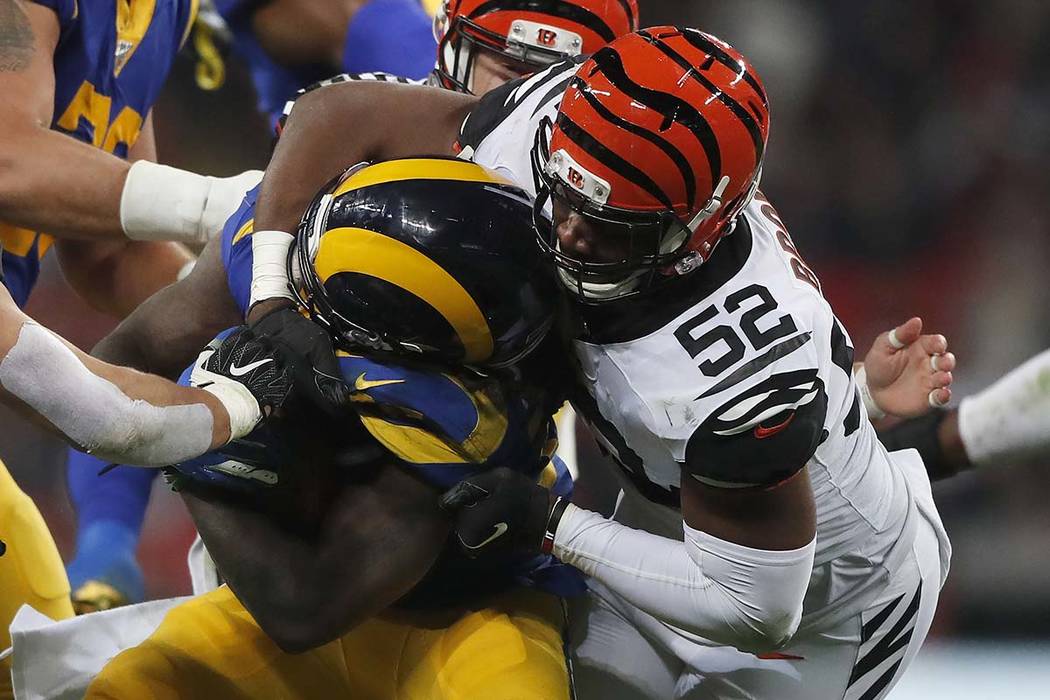 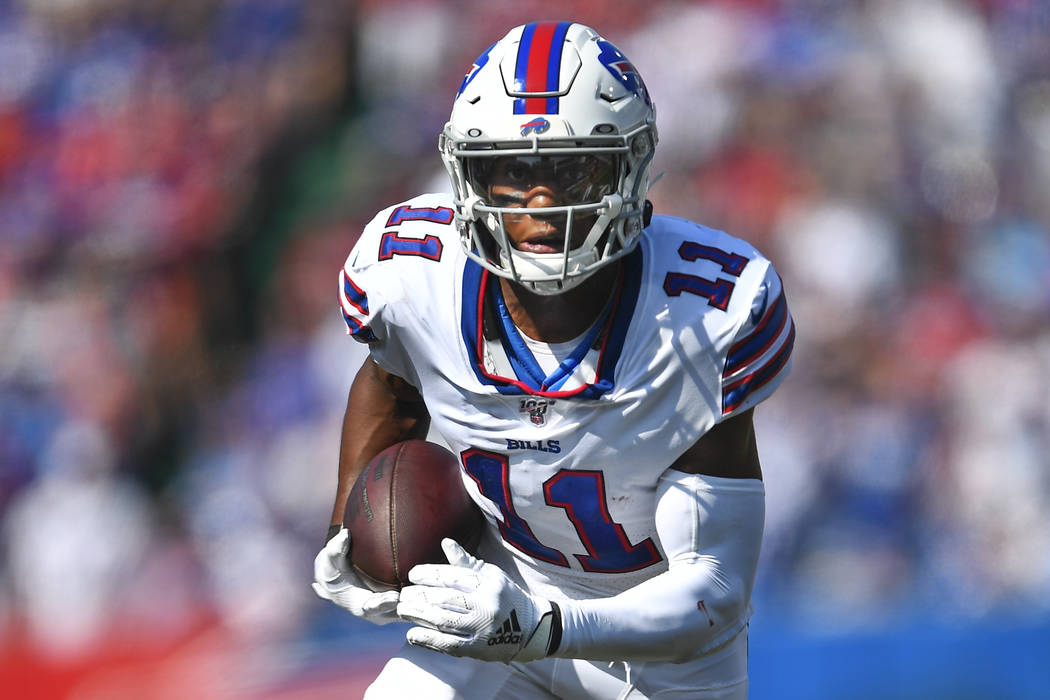 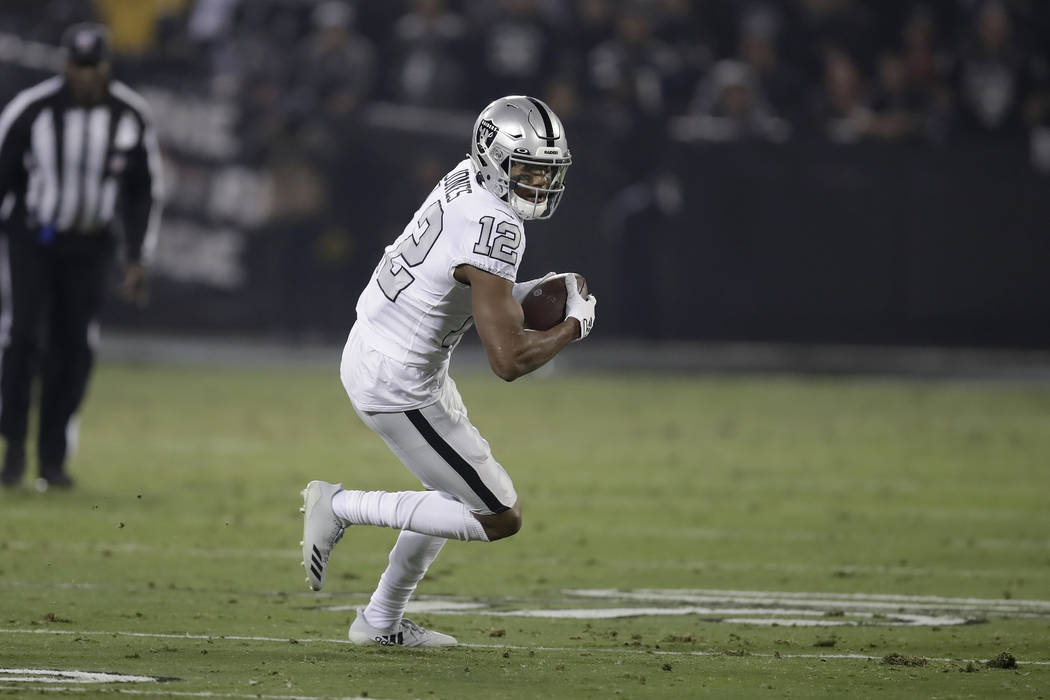 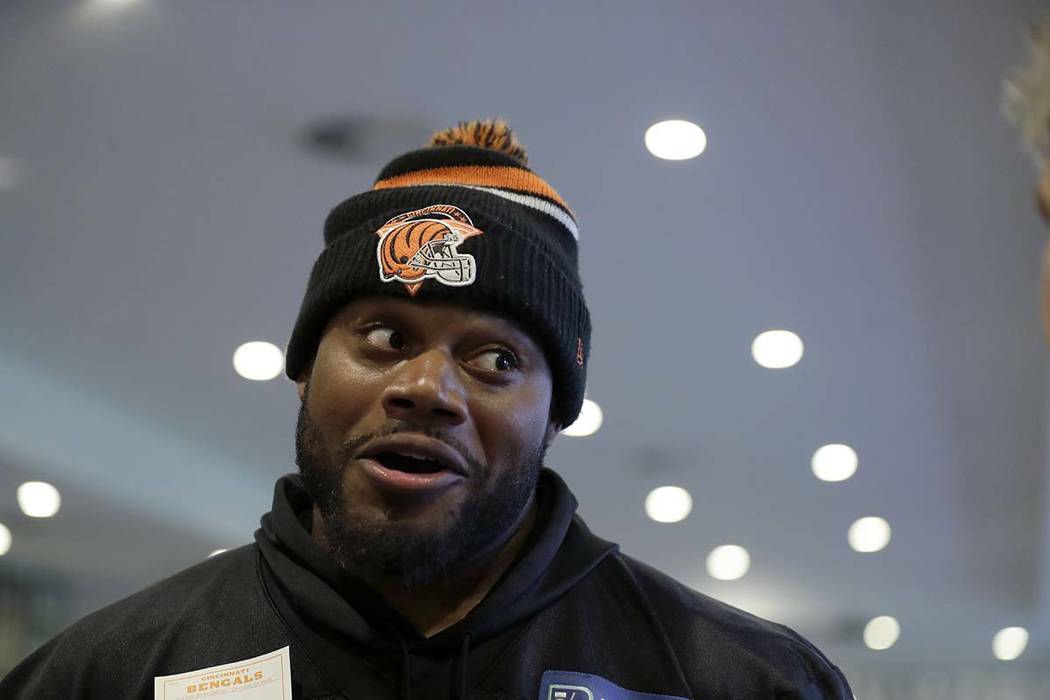 Cincinnati Bengals' linebacker Preston Brown speaks to journalists after an NFL practice session at the Allianz Park stadium in north London, Friday, Oct. 25, 2019. The Cincinnati Bengals are preparing for an NFL regular season game against the Los Angeles Rams in London on Sunday. (AP Photo/Matt Dunham)

ALAMEDA, Calif. — When linebacker Preston Brown arrived in the Raiders locker room, there were a few faces familiar to him from his time in Buffalo. But there was only one with a clever nickname.

“PB and Zay — that’s what we go by,” wide receiver Zay Jones said.

Brown and Jones had lockers next to one another with the Bills when they shared the 2017 season on the squad. Brown was in his fourth season out of Louisville, on his way to a fourth consecutive year with at least 100 total tackles. Jones was in his first year out of East Carolina, a second-round pick trying to find his way in the league.

“As a rookie, the things that you remember in your first season is how people treated you,” Jones said. “Preston was one of those guys who was really cool to me, really open with me and helped me out.”

Brown recalled the two had some good times in Buffalo.

“Me and Zay were locker neighbors so we had a little TV show on the Bills website,” Brown said. “We’d do different things around the Bills locker room. So it’s pretty fun seeing a familiar face like that.”

Brown has only been with the team for a few days, but said he feels comfortable in the defensive scheme since it’s similar to what he played during the 2018 season in Cincinnati. And while Brown didn’t imagine he’d be playing for the Raiders this season, he certainly appreciates going to a team with a winning record after spending the first half of the season with the winless Bengals.

“Oh yeah — it’s a lot better than being 0-10,” Brown said. “I take it as a blessing and I’m excited to get started, meet new guys, learn a new defense, and being on a winning team is cool.”

Raiders head coach Jon Gruden said Brown probably will not be active for Sunday’s game against the Jets as he continues to get acclimated to the team. But Brown said he’s nevertheless willing to help the team win by doing whatever he can.

“I don’t know how exactly stuff’s going to shake out,” Brown said. “But I’ll be ready whenever I’m (asked) to play.”