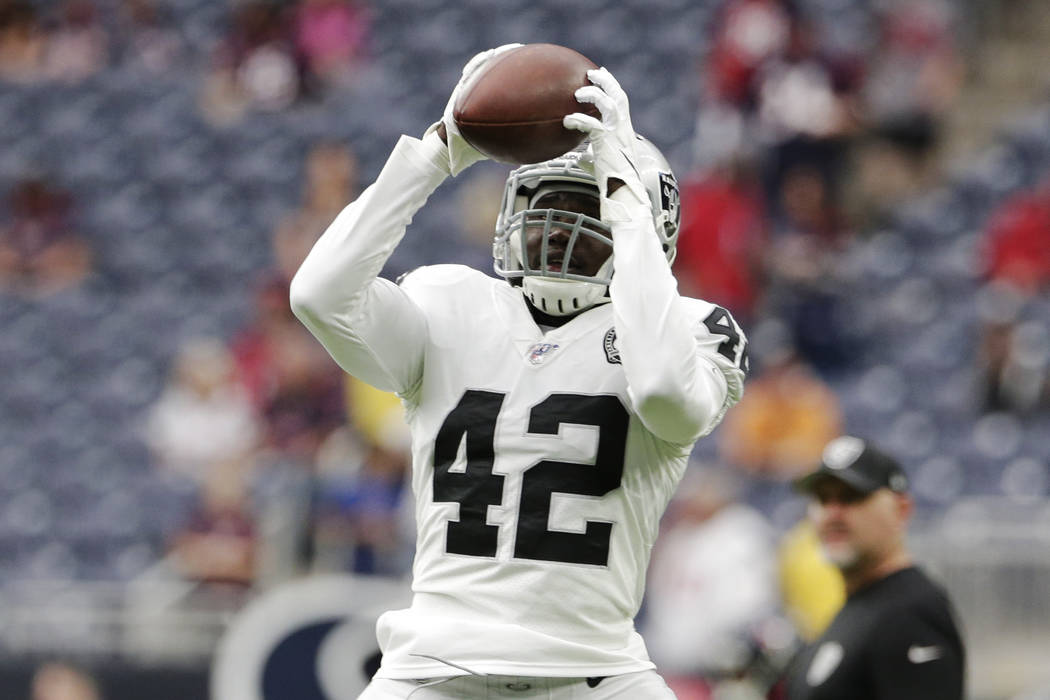 ALAMEDA, Calif. — Raiders safety Karl Joseph knew something was wrong as soon as he planted to go up for the game-clinching interception in Thursday’s win over the Chargers.

“I just had to finish that play off,” he said after Monday’s practice at the team’s facility. “I knew right when it happened something was really wrong because I couldn’t walk.”

Joseph was placed on injured reserve by the team over the weekend, ending his season. The exact extent of the foot injury isn’t entirely clear because the swelling has not subsided enough to allow for a thorough examination.

The 26-year-old, a first-round pick of the Raiders in 2016, may have played his last snap for the organization.

Joseph is a free agent at the end of the season, though he says he would like to be a part of the team’s move to Las Vegas.

“Of course,” he said. “This is the team that drafted me. I love playing with this group of guys and for this coaching staff. I love playing in (defensive coordinator Paul Guenther’s) system. I think it’s a great system for me and for the safeties.

“We’ll see what happens. It’s out of my control now. All I can do is try to get healthy and get better. I believe everything will work itself out.”

Linebacker Marquel Lee returned to practice Monday for the first time since going on injured reserve with an ankle injury in September. That starts the clock on the team’s 21-day window to decide whether to bring him back or end his season for good.

While Lee can practice, he won’t be eligible to play until the Raiders visit Kansas City on Dec. 1.

“It felt great to put that helmet back on and just to be out there with those guys,” Lee said after practice. “This defense has been rocking for the last two games. It’s an exciting thing to come back into.”

Each team is allowed to bring two players per season back from injured reserve after eight weeks. Cornerback Isaiah Johnson returned to the team last week after missing the first half of his rookie season.

Joyner suffered a hamstring injury late in Thursday’s win over the Chargers and is considered questionable for Sunday’s game against the Bengals, though there doesn’t seem to be much optimism six days out.

Coach Jon Gruden said Nevin Lawson could step into Joyner’s slot role, though Daryl Worley could also move inside should the Raiders decide to play Johnson outside.

Jordan was absent because he won’t be eligible to come off his 10-game suspension until Tuesday. He was suspended for using Adderall after his therapeutic-use exemption had expired. He will practice for the first time with his new team on Wednesday.

The No. 3 overall pick in the 2013 draft has been anxious to resume his tumultuous career after the most recent setback.

“He’s a talented guy,” Gruden said. “We liked him at Oregon. We liked his body of work in Seattle last year when we played against him. We’re happy to have him. We need him.”