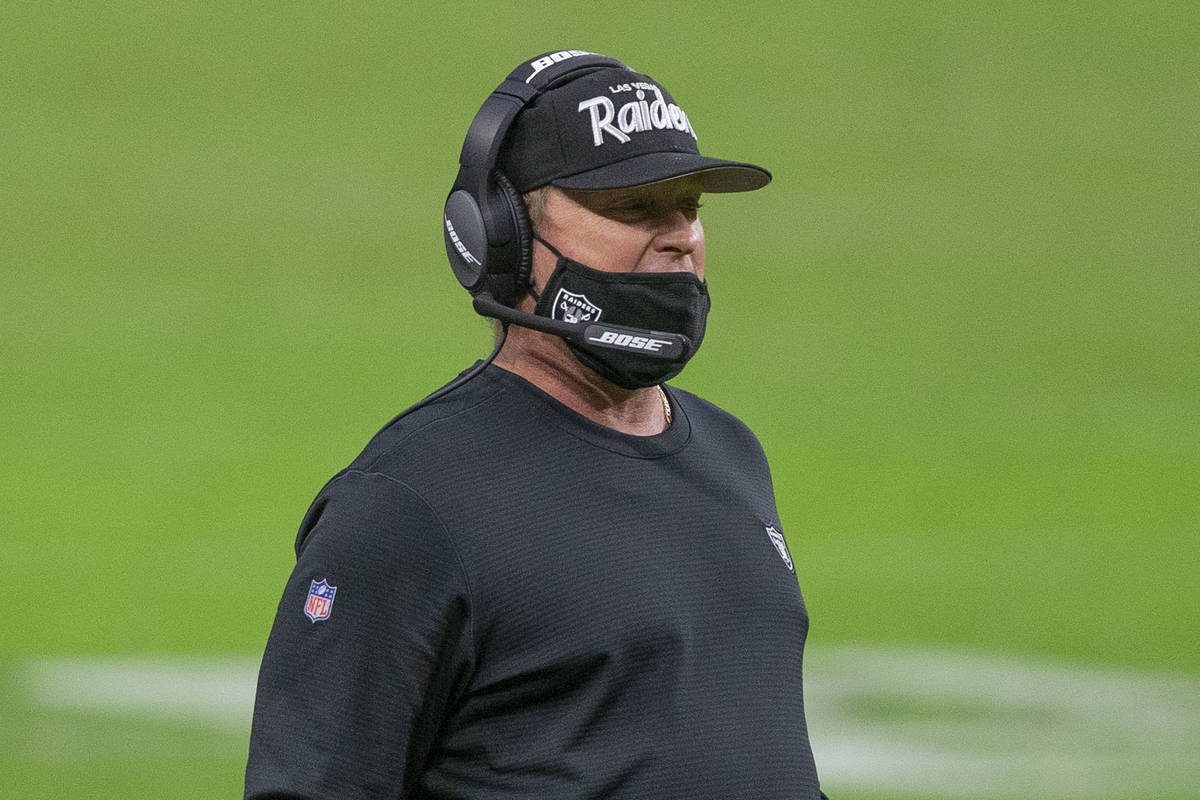 Sunday’s blowout loss in Atlanta left the Raiders battered and searching for answers. It also left them on the outside looking in at the AFC playoff picture.

The Raiders slipped all the way to ninth place for the time being, though Baltimore is an underdog to Pittsburgh should that game be played on Wednesday, and the Ravens are just a half-game ahead of the Raiders in the standings.

Even with the extra wild-card spots that increase the number of playoff teams from six to seven in each conference, the Raiders would be left to watch postseason games at home in Las Vegas were the season to end today.

They need to find a way to climb back into the top seven. The good news is the Raiders still have plenty of chances to do just that.

Home games are on the horizon with Indianapolis and Miami, teams that hold wild-card spots at 7-4 in the AFC.

Coach Jon Gruden knows the Raiders are in control of their destiny, but he wants to make sure his team is focused only on Sunday’s matchup against the hapless and winless New York Jets.

“I’m not going to worry about anything down the road except the Jets,” he said. “We’re concentrating one week at a time.

“If you watched the Jets play yesterday, they’re a handful. They are going to be hard to move the ball on. Gregg Williams and this defense give people problems. This will be a fistfight, no doubt about it. I got a lot of respect for the way the Jets are competing.”

The Raiders did get good news Monday. Gruden is optimistic running back Josh Jacobs will be cleared to play Sunday despite injuring his ankle in the loss to Atlanta. Right tackle Trent Brown, who has only played one full game this season, is expected to return to practice on Wednesday, though Gruden doesn’t expect he will be ready to play this week.

He does hope defenders Clelin Ferrell, Lamarcus Joyner and David Irving will all be available this week, as well.

A loss on Sunday wouldn’t be disqualifying, but it would cripple the Raiders’ hopes. It would also officially eliminate even the slightest chance they could catch Kansas City for the AFC West title, a dream that was essentially wiped away when Patrick Mahomes found Travis Kelce wide open in the end zone in the closing seconds of their prime-time matchup at Allegiant Stadium in Week 11.

So the focus is on securing one of the three wild-card spots in the AFC. The first order of business is to root for the four division winners to just keep winning.

Pittsburgh (10-0), Kansas City (10-1), Tennessee (8-3) and Buffalo (8-3) would all be tough to catch anyway and could do Las Vegas some real favors by knocking off some of the other wild-card contenders.

If those four teams do separate themselves from the pack, it will leave the Raiders in a group of six teams fighting for three spots.

Again, there are factors working in the Raiders’ favor. That starts with having three of their final five games at home, with the two road trips against non-contenders in the Jets and Broncos.

Las Vegas also has those two home games against the Colts and Dolphins, the teams ahead of it in the wild-card standings, scheduled for Allegiant Stadium in December. The game against the Dolphins was announced Monday as a prime-time affair on Saturday, Dec. 26.

The one team ahead of them in the wild-card standings the Raiders don’t still have on their schedule is the Browns, and they beat Cleveland 16-6 and own the head-to-head tiebreaker.

Cleveland holds the top wild-card spot at 8-3. While the Browns are two games ahead of the 6-5 Raiders at the moment, the victory in that 16-6 snowball fight on Nov. 1 now looms large.

Baltimore is also casting a shadow over the proceedings. The 6-4 Ravens have lost two in a row and are big favorites to drop another if and when their game with Pittsburgh is played. The Baltimore roster is depleted by COVID-19 cases.

But the Ravens are dangerous team with Lamar Jackson, the reigning MVP, at quarterback and have four of their final five games against teams with a losing record.

Another perennial power, New England, has also worked itself back into the mix. The Patriots have won three of four and sit just one game behind the Raiders at 5-6. Bill Belichick’s squad also owns the head-to-head tiebreaker over the Raiders, so they are a potential spoiler.

A two-game trip to Los Angeles for games against the Chargers and Rams over the course of five days will determine whether the Patriots are in the hunt for the rest of December.