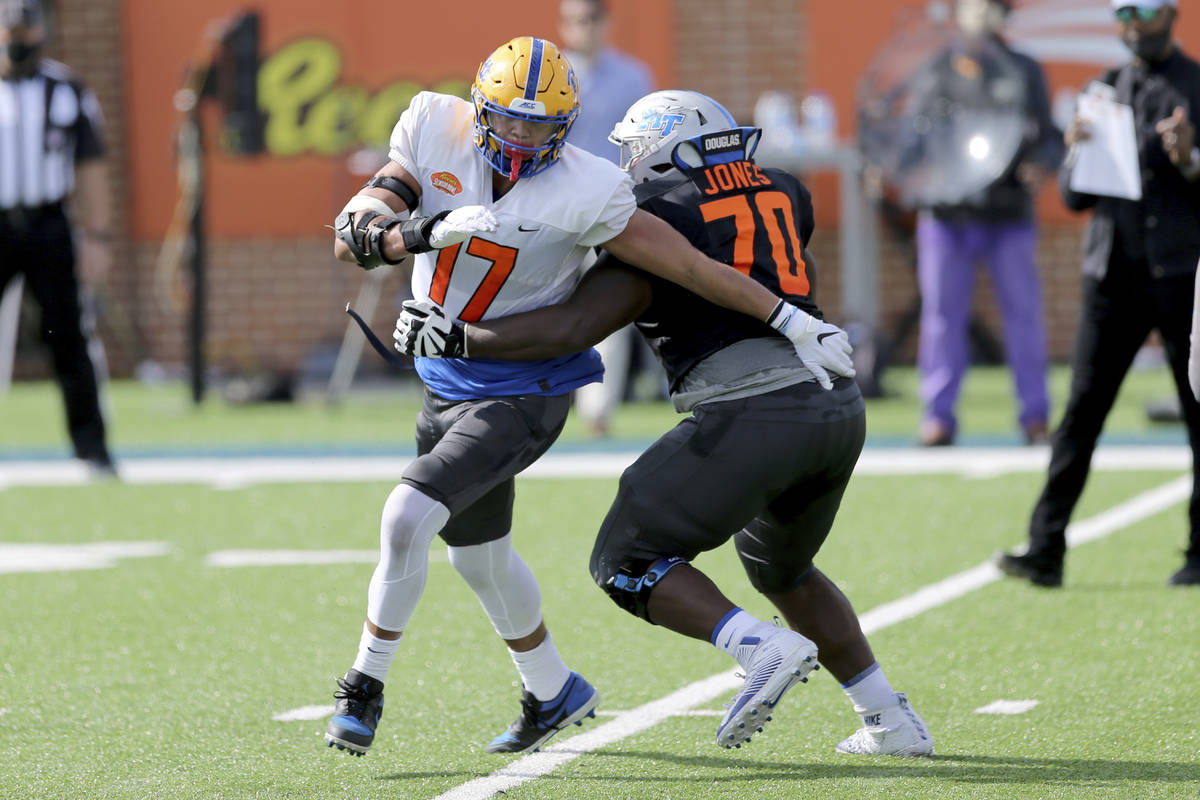 MOBILE, Ala. — With the Miami Dolphins coaching staff in charge of the National team at the Senior Bowl, it means defensive-minded head coach Brian Flores gets to set a particular tone at practice this week.

That suits Notre Dame defensive lineman Daelin Hayes just fine, especially after playing under offensive-minded head coach Brian Kelly in South Bend. As Hayes joked after practice on Wednesday, if you so much as breathed on the quarterback during Notre Dame drills, the reaction from Kelly was somewhere between full-on panic to borderline cardiac arrest.

Not so here in Mobile, where the environment set by Flores and his staff highly encourages and welcomes defensive tenacity. Even if it means the quarterbacks taking a hit every now and again.

It is also the perfect setting from which the defensively needy Raiders can assess draft prospects.

Among them, speedy Pittsburgh defensive end Rashad Weaver, who has turned heads with his burst off the edge and power to stand up against the run. After missing the 2019 season with a knee injury, Weaver planted himself firmly on the NFL radar in 2020 with 34 total tackles, including 7.5 sacks, 14 tackles for loss and three forced fumbles.

His stock appears on the rise with NFL coaches and front-office personnel getting an up-close look at him this week. That was obvious in one-on-one drills, with Weaver showing both great hand and footwork dealing with blockers and an ability to win battles with his speed and power.

Weaver is one of two highly regarded Pitt defensive linemen here, along with Patrick Jones II. Both are projected to be Day Two picks, and each fits a need for the Raiders.

Another Raiders target is Wake Forrest defensive lineman Carlos “Boogie” Basham, who is projected to be a first-round pick after a stellar four-year career. He finished with 173 total tackles, including 20.5 sacks and 36.5 tackles for loss.

Bashman weighed in at 285 in Mobile, and there is some question whether that size is better suited inside rather than outside. But as he’s shown through the early part of the week, he has a knack for beating blocks, even off the edge, and being disruptive behind the line of scrimmage.

Hayes, another Raiders target, is an athletic rush end who has flashed over the first couple of days with his ability to create pressure off the edge.

After putting his power on display on the opening day of practice on Tuesday, Hayes showed his speed with a couple of nifty pass-rush sequences in one-on-one drills and during the team period.

Hayes’ power was a staple during his time in South Bend, but upon leaving Notre Dame to devote more time to football, he’s finding his groove athletically.

“It’s definitely something I’m putting in the toolbox to be able to pull out,” said Hayes, who has nine tackles for losses and six sacks over the last 12 games of his Notre Dame career.

Hayes could represent value in the fourth round and beyond, although his performance thus far in Mobile could move him up in the draft.