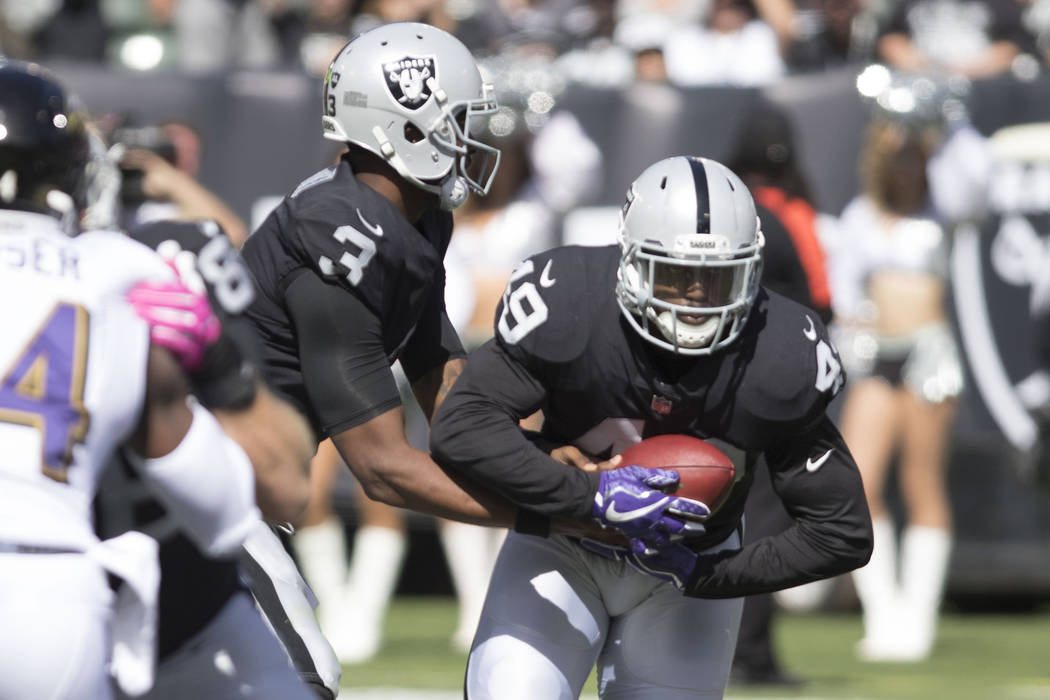 Oakland Raiders fullback Jamize Olawale (49) carries the football against the Baltimore Ravens in the first half of their game in Oakland, Calif., Sunday, Oct. 8, 2017. (Heidi Fang/Las Vegas Review-Journal) @HeidiFang

OAKLAND, Calif. — The Raiders again have cleared cap space and moved up in the draft.

Their maneuver, however, came at a cost.

Jamize Olawale, a steady veteran who, when healthy, contributed both at fullback and special teams, reportedly was traded Tuesday to the Dallas Cowboys. In exchange, the Raiders swapped late-round picks, moving a sixth-round choice for a fifth-round selection just as they did Sunday when agreeing to trade wide receiver Cordarrelle Patterson to the New England Patriots.

Days ago, the Raiders had no picks in the fifth round and six in the sixth. Today, they own two and four picks in those rounds, respectively.

Olawale, 29 in April, was due $1.6 million in 2018 earnings. Those figures are effectively cleared from the books, although he still will count $190,000 against the cap for the remaining prorated portion of his signing bonus.

Raiders did it again. With FB Jamize Olawale’s trade to Dallas, they moved a sixth-round pick for a fifth-round one. Same as Cordarrelle Patterson trade to NE. Team now at two picks in fifth, four in sixth. @RapSheet reported trade terms.

When the Raiders signed former Cowboys fullback Keith Smith last week, there was no doubt Smith was the fullback whom the team coveted more. He played in Dallas for now-Raiders special teams coordinator Rich Bisaccia. And so a trade involving Olawale seem possible.

But there was an argument to be made for him to remain through training camp, given he offered versatility and depth behind Smith.

That depth is now gone, perhaps to be searched for elsewhere at a lower price.

Olawale played 12 games last season. He totaled nine carries for 43 yards and a touchdown with six catches for 33 yards. He was more active on special teams, seeing 195 snaps there compared to 82 on offense.