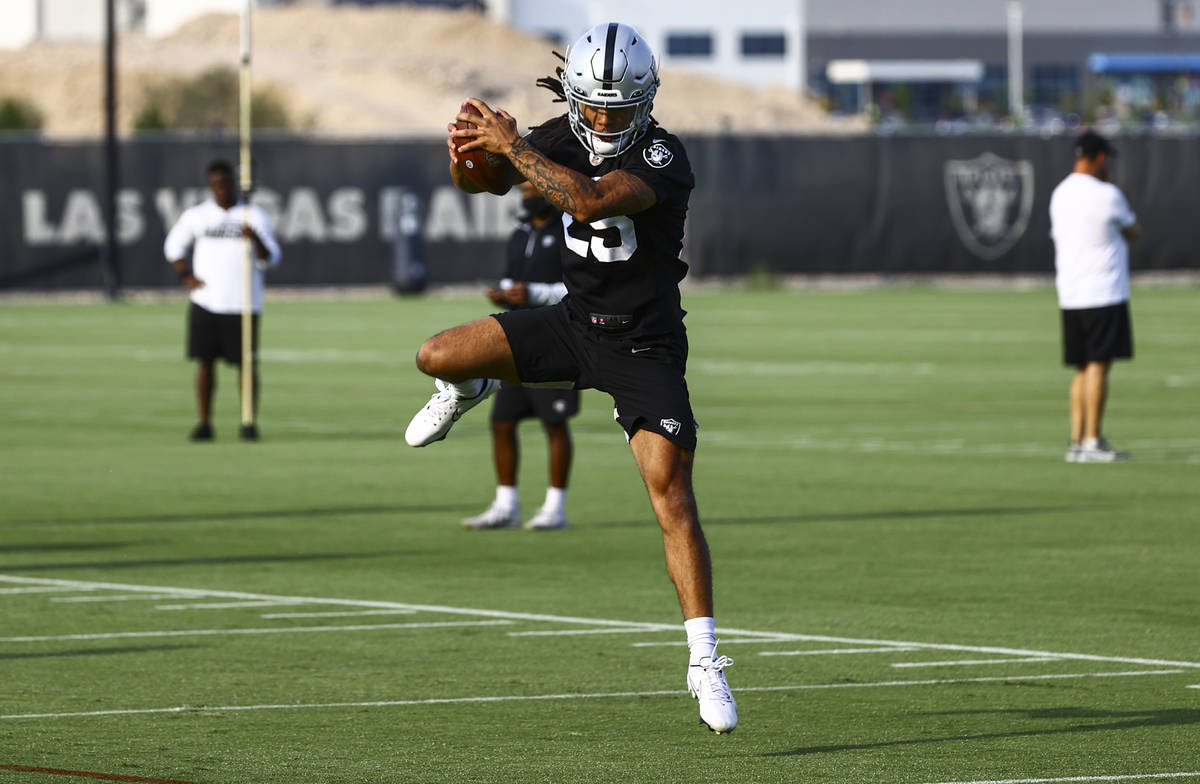 The on-field portion of the first week of Raiders training camp consisted of nonpadded practices. The pace was considerably more intense than during organized team activities and minicamp.

But the lack of full pads — and the physicality it adds — renders assessment-making a bit incomplete.

That all changes Tuesday when the Raiders begin practicing in pads, at which point a clearer picture will begin to emerge.

Nevertheless, much can be gleaned from the first four days of camp, and here are some observations:

Veteran Dallin Leavitt got the majority of first-team snaps at free safety when camp opened Wednesday, but as the week progressed, rookie Tre’von Moehrig was lining up more and more with the first team. By Saturday, it appeared he had taken the lead.

Two things to keep in mind: Fellow rookie Tyree Gillespie, who impressed during the offseason, missed three days of practice with an undisclosed injury. His anticipated return this week will change some of the dynamics in the competition at free safety.

Secondly, the introduction of pads will add a new element. That could work in Moehrig’s favor. While the former Texas Christian standout was considered the top pass-cover safety in the NFL draft, he was also a physical, effective tackler.

“Moehrig, I think, is going to show up when the games start,” coach Jon Gruden said. “Right now, it’s still in shorts, but I’m really impressed at what we’ve seen so far.”

Moehrig handled several roles at TCU, but in coordinator Gus Bradley’s defensive scheme, he will line up as a post safety in which his pass coverage and run-defense skills will be on display.

“They’re kind of giving me more free range to show my athleticism and do those kinds of things,” Moehrig said.

Hobbs in mix at slot corner

Rookie defensive back Nate Hobbs also has been a bright spot. His stout, powerful build and tenacious playing style have been noticeable.

The fifth-round pick from Illinois has forged his way into the picture at slot cornerback. Veteran Nevin Lawson is getting the early nod, but Hobbs has been consistently working with the first and second groups and shown impressive coverage skills while lined up inside and outside.

He was stride-for-stride with speedster Henry Ruggs on one play during 11-on-11 drills and contested a throw that eventually fell incomplete.

Hobbs has credited the tutelage of former Illinois coach Lovie Smith, now the defensive coordinator of the Houston Texans, for his polished approach.

“When you have that type of pedigree for three or four years, you have no idea what that can do for your growth,” Gruden said. “He can play nickel. He can play corner. Great communicator, very alert and professional young guy.”

Muse back in picture

A toe injury wiped out all of Tanner Muse’s 2020 rookie season, but the Raiders still have high hopes for the former Clemson standout.

Now completely healthy and a year into his transition from college safety to NFL linebacker, Muse has been working exclusively with the first and second teams and appears to have settled in as a base-personnel outside linebacker.

“He’s done a good job,” Bradley said. “He’s got really good speed. In college, that’s what showed up for him, so to have an athletic guy like that on the perimeter … we just got to see how he is when we get the pads on.”

Second-year linebacker Javin White of UNLV also has been practicing with the first and second teams and could be in line for playing time.

“We’ve always said that if guysreally practice well and show that they’ve earned the trust of the coaches, we’re going to try to find a package for them,” Bradley said.

Before joining the Raiders last season, Cory Littleton was one of the NFL’s best pass-cover linebackers. That didn’t translate with the Raiders and contributed to a disappointing season in which Littleton looked lost in then-coordinator Paul Guenther’s scheme.

But Bradley is optimistic that Littleton can regain his pass-cover skills. Beyond that, his new responsibilities in Bradley’s scheme include a lot of interior run fitting.

Littleton isn’t a big linebacker, and his weight during the season sometimes drops below 220 pounds. That isn’t always ideal for the physicality needed to man his position.

“So now … you’re a B gap linebacker or an A gap linebacker in our scheme, (and) how are you versus the run?” Bradley said. “That’s the biggest challenge for him. But he’s got length, and in our system, some guys that are a little bit lighter … have a place in our system.”

The Raiders turned to a familiar face to replace kicker Daniel Carlson, who was put on the COVID-19 list Saturday, by re-signing Dominik Eberle.

Eberle spent his 2020 rookie season on the practice squad. He was an undrafted free agent from Utah State.

The Raiders eagerly await the return of Carlson, who tied for the NFL lead in points last season with 144 while making 33 of 35 field goals and hitting all four attempts from 50 or more yards.