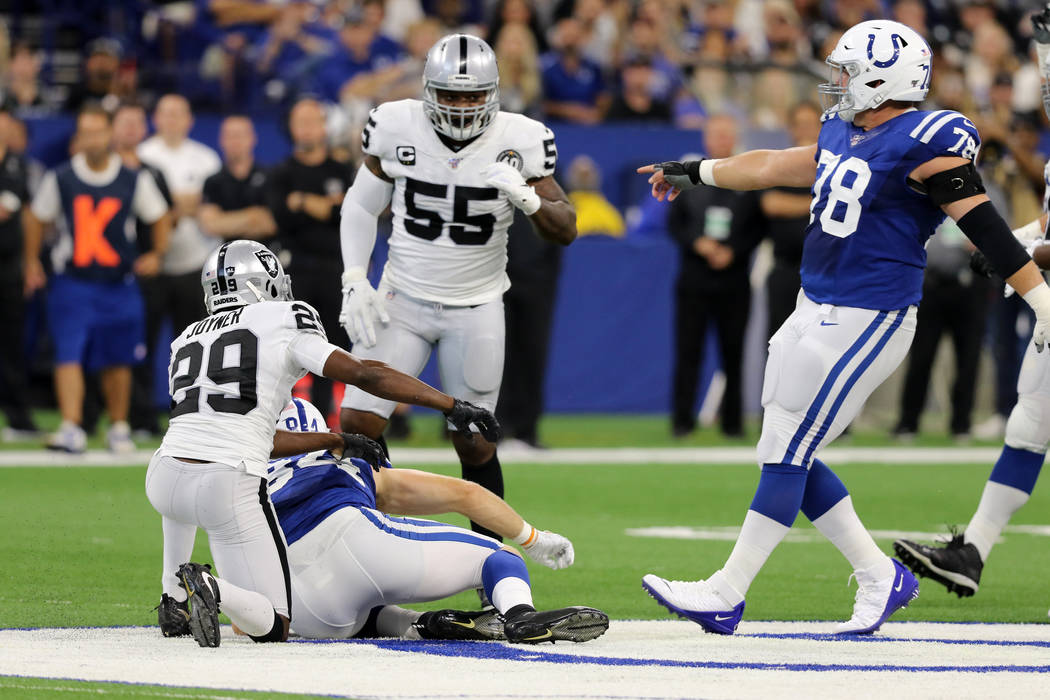 Indianapolis Colts center Ryan Kelly (78) points to Oakland Raiders outside linebacker Vontaze Burfict (55) as a penalty flag is thrown for a hit on tight end Jack Doyle (84) as free safety Lamarcus Joyner (29) gets up from tackling him during the first half of an NFL game at Lucas Oil Stadium in Indianapolis, Ind., Sunday, Sept. 29, 2019. (Heidi Fang /Las Vegas Review-Journal) @HeidiFang

INDIANAPOLIS — Raiders captain and middle linebacker Vontaze Burfict was ejected from the team’s 31-24 victory in the second quarter after being flagged for unnecessary roughness.

On third-and-3, Indianapolis quarterback Jacoby Brissett connected with tight end Jack Doyle over the middle with a five-yard pass. Burfict came in and hit a defenseless Doyle directly with his helmet and was called on the field for a personal foul. Play was then stopped for a video review in New York, which resulted in Burfict’s ejection.

Asked if he agreed with Burfict’s ejection, Raiders coach Jon Gruden said, “I know New York City pulled the ejection, so you’d have to ask New York — whoever is in the room that made that decision. … Nobody on the field in our stadium or in this zip code made the call to eject him — that came from New York City, so what can I do? I don’t have a cellphone on the field.”

Gruden called the ejection “a tough decision” and “a tough call.”

“I think it was a flag,” Gruden said. “It was well documented that the league was going to review those plays this year in New York City, so that’s what happened. I’ll wait to hear what their reasoning was, but it was a penalty — he went in there with his head down.”

Entering Sunday’s game, Burfict had been flagged 15 times for unnecessary roughness with another pair of personal foul penalties. Burfict has also been suspended twice for repeated violations of player safety rules.

Despite how ugly the hit looked on a slow-motion replay, Doyle said after the game, “I just got tackled. I’m sure it looked worse than it was. I didn’t really feel anything from it. My helmet protected me.”

The Raiders’ defense was able to play well for most of the contest — though the club did surrender a pair of touchdowns late in the fourth quarter. In Burfict’s absence, Tahir Whitehead moved inside from outside linebacker to call the Raiders’ defensive signals.

“Tahir became a little more vocal. And Vontaze, he wasn’t there physically, but he was there spiritually with us,” Raiders defensive back Lamarcus Joyner said. “He was talking to us in the locker room when we came in (for halftime), encouraging us, telling us not to let up.”

Given Burfict’s history, a fine is highly likely and a suspension is not out of the realm of possibility. But Joyner said he’s expecting Burfict to be able to play next week.

“We definitely need him, but I’m not worried about him being gone because when you look at it, it wasn’t vicious. It wasn’t intentional — it was just a bang-bang play,” Joyner said. “He’ll probably get fined for it — of course he will. But he should be there with us in London.”

The Raiders play the Bears next Sunday in London.

The Raiders have seemingly had a revolving door at their guard positions over the season’s first four weeks. That will continue the next few games, as Gruden announced postgame that Jordan Devey has a torn pectoral muscle and will be out for the season.

Denzelle Good replaced Devey at that spot on Sunday and is likely the starter for next week’s game against the Chicago Bears.

Gruden also said that Raiders regular starting right guard, Gabe Jackson, should be back after the bye week.

Right tackle Trent Brown once again had to exit the game for a few snaps — this time for a hand injury. He was able to re-enter the contest and finish it.