With the departure of three of the starting offensive linemen, the Raiders young players are looking to an NFL veteran of 16 years, Richie Incognito, to guide them. (Heidi Fang/Las Vegas Review-Journal) 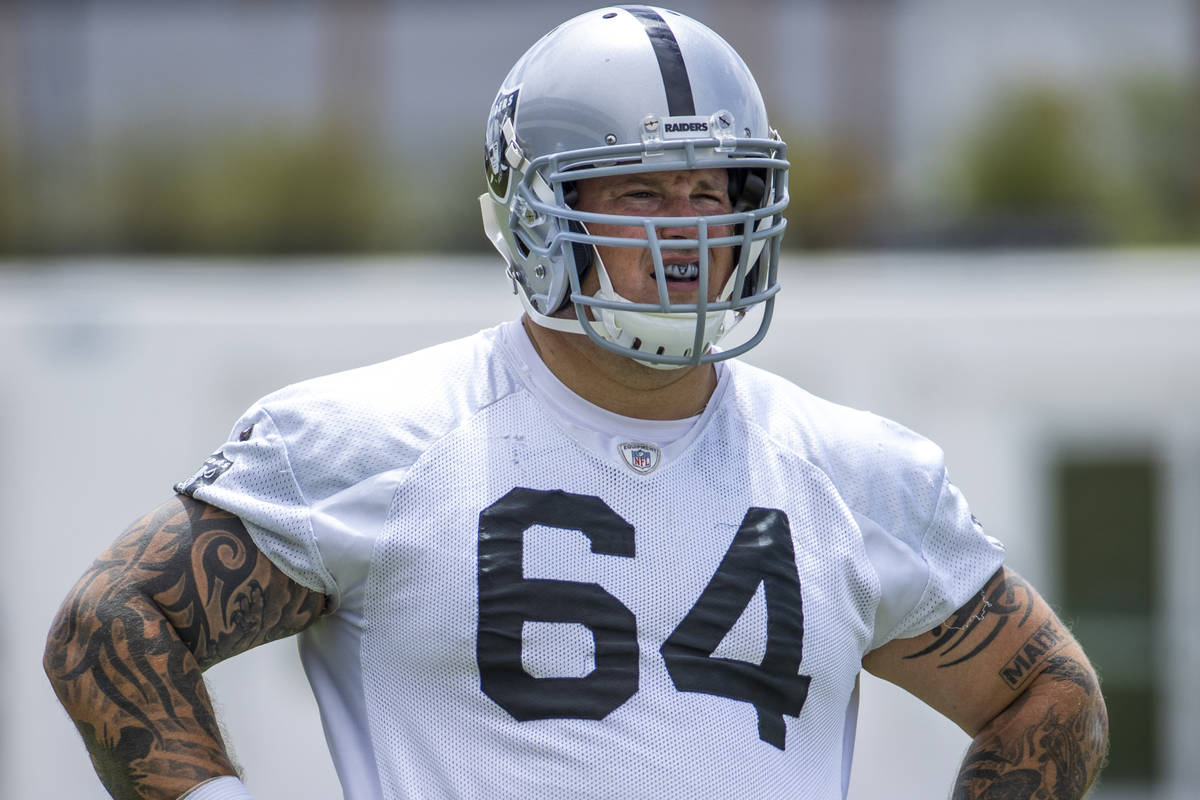 Defensive lineman Clelin Ferrell knows at least one of the votes he will cast when it’s time for the Raiders to select their team captains this season.

He has voted for veteran left guard Richie Incognito in each of the last two seasons and plans to do so again.

“I feel like a lot of things can get misconstrued about Richie,” Ferrell said. “Yeah, he is a little crazy. But at the same time you would never know because he’s such a disciplined and good dude.”

Incognito has not received enough votes to be elected captain in either of the last two seasons, but there is no doubt he will be counted on to be the leader of an offensive line that shed a ton of experience and leadership when veterans Rodney Hudson, Gabe Jackson and Trent Brown were traded this offseason.

The soon-to-be 38-year-old not only expects to return to the form he showed in 2019 when he allowed just one sack on 432 pass-blocking snaps, but he welcomes the responsibility of helping in the development of his new linemates.

“It’s my job to keep those guys going, keep them hungry, keep them humble and … just go out there and really get after people,” said Incognito, who knows offensive line coach Tom Cable wants his guys to be physical

“That’s where I come in,” he said. “I set the tempo every day in practice. I bring it every day … I’m out there mixing it up and putting people on their head, and that energy is contagious.”

Incognito as a team leader may seem strange from the outside considering what a simple Google search of his past turns up. His issues have been well documented.

But he has been a model citizen in his time with the Raiders, earning the respect of his teammates.

“Richie’s my guy,” defensive end Maxx Crosby said. “He’s a big, positive influence around the building. The guy’s been in it for 17 years playing offensive line. It’s honestly unheard of. He’s a leader. He loves football and the guy looks like he’s 25 years old. … We’re excited to have him back.”

His presence may not be only temporary. Despite suffering a season-ending Achilles injury in Week 2 last season, he never considered retirement. Incognito immediately went to work rehabbing both at the team facility and at EXOS in Arizona in preparation to not only return for 2021, but beyond.

“I knew I was just going to grind and rehab and come back stronger,” he said. “I had surgery in November. Since then I’ve been locked in the gym just running, conditioning, lifting, and yeah, it’s one of those things where I didn’t want to go out on an injury.

“I’ve had such a long career. I wanted to come back and kick ass and play another couple years with the Raiders.”

At least part of that motivation can be attributed to the frustration of sitting on the sideline last season.

Since he missed the 2014 season due to a league-issued suspension, Incognito had played in 60 of the 62 games in which he was eligible.

“I’ve been sturdy,” he said. “I’ve played a lot of games in this league. Our guys are out there gutting it out trying to get in the playoffs and I’m just sitting around. That was tough.”

The time away makes his return even sweeter.

“I feel great. I’m 37 going on 38,” Incognito said. “The injury healed up real good, rehab went well and offseason training, it goes a long way. We do a ton of different stuff to get the body ready. … I feel great.”

The Raiders hope that continues into the season and he can not only play at the high level he did in 2019, but also form the bridge between the old guard and the newcomers on the offensive line.