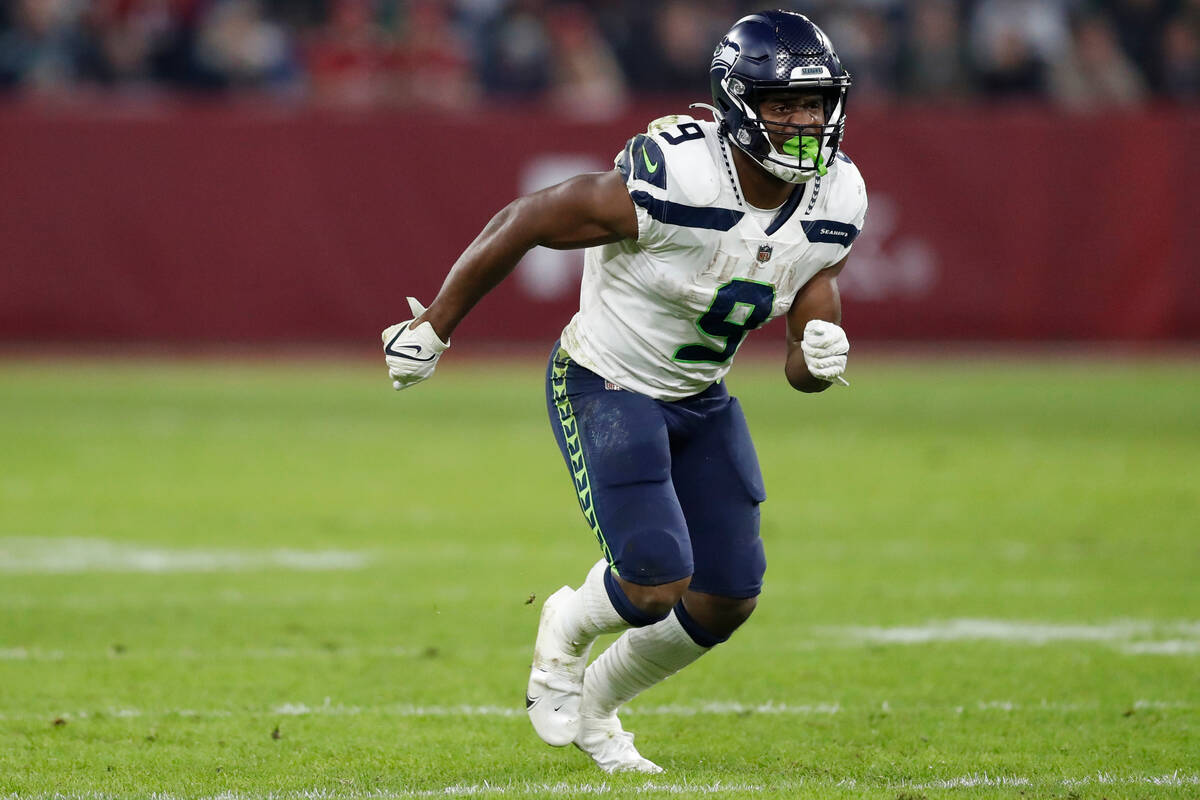 All of the excitement in the fantasy football community about Seahawks rookie Kenneth Walker was somewhat tempered by questions about how good of a receiver he would be at the NFL level.

He may be starting to provide answers.

Walker was completely shut down in the running game by the Buccaneers in Germany the last time the Seahawks took the field, but he salvaged his fantasy day with a career-high six catches for 55 yards.

The points in the passing game are a nice bonus for a player whose stock has soared since he took over as the featured back for Seattle.

Over the last five games, Walker has finished in the top five at the position in three different weeks.

The Michigan State product has averaged 22 touches and 106 total yards. Most of that had come on the ground until he showed off his receiving skills against Tampa Bay.

That breakout in the air should have been a bit more predictable based on his involvement in the passing game. He has run a route on nearly 50 percent of passing plays over the last two weeks. Now he’s getting rewarded with targets, drawing eight the last time out.

He may be able to thrive in that area again this week. The Raiders are last in the league in allowing receiving yards to running backs and have allowed more rushing yards per game than all but three teams.

While he should also be able to have success on the ground against the Raiders’ struggling defense, Walker may need to keep up the expanded role in the passing game if he wants to help his fantasy managers in the playoffs.

The schedule gets brutal down the stretch. In Week 15, the Seahawks draw a 49ers team that held them to 36 rushing yards and 216 total yards back in September. When most leagues hold their championship games in Week 17, Seattle will play a bruising Jets defense that is allowing less than 14 points per game over the last five weeks.

Walker’s managers may need all the points they can salvage when the matchups matter most.

They should be just fine on Sunday, though.

Here is a look at some other buy and sell candidates for the 1:05 p.m. game between the Raiders and Seahawks at Lumen Field in Seattle:

If a running back is going to get 100 percent of a team’s rushing attempts, he’s a valuable fantasy asset. It just so happens Jacobs is also making the most of those opportunities.

Jacobs picked up 109 yards on 24 carries last week against the Broncos as no other Raiders player recorded an attempt. He also had a big day in the passing game.

So much for coach Josh McDaniels employing the “Patriot Way” of spreading the usage out among an expanded crew of running backs. McDaniels said this week Jacobs has dictated that change of philosophy by being so efficient and rarely needing a rest.

The result has been Jacobs sitting near the top of the rankings as the No. 4 running back in fantasy. This isn’t a great matchup, but the usage alone should be enough to salvage his day.

Any buzz that may have been created when he was included in the Russell Wilson deal has long ago vanished.

The belief that Seattle specifically asked for him because it had some grand plan to unlock the full potential of the talented pass-catcher was just a pipe dream. Even in this surprisingly explosive offense, the resurgent Geno Smith hasn’t utilized him very often as Fant has shared time with Will Dissly.

Fant has just one touchdown and finished in the top 12 at the position in just one week this season. The game he scored his touchdown? It was his only catch for two yards in a 48-45 shootout win over the Lions.

It may be tempting to use him against a Raiders team that hasn’t been great against tight ends, but resist the urge.

The Raiders stepped up the pressure a bit last week, but still have trouble getting to the quarterback and forcing turnovers.

Seattle is tied for the third fewest interceptions thrown in the league with just five as Smith has taken excellent care of the ball.

There are better options.