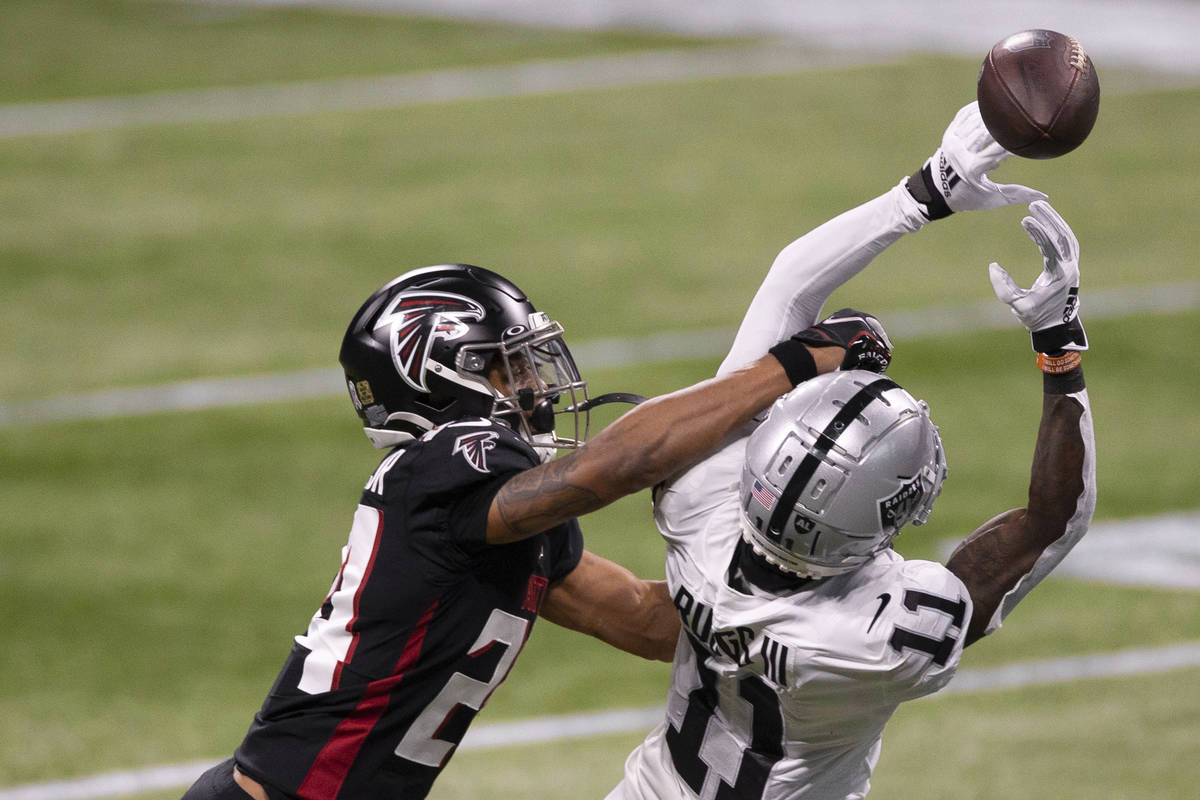 No matter how one chooses to sum it up, Sunday’s performance in Atlanta was an ugly one for the Raiders.

According to an ESPN tweet, no NFL team since 1940 had eclipsed the 11 penalties for 141 yards, five turnovers, five sacks and 43 points allowed in a single game.

It was just the third time in franchise history the Raiders had five giveaways, allowed five sacks and run for fewer than 50 yards.

“We’ve been pretty good to this point,” Gruden said. “We’ve had a couple games where we have been penalized. Roughing the passer, roughing the kicker today. We had some holding calls, illegal hands to the face. You fall behind in the down and distance, you give teams free shots. It’s a recipe for disaster and that was what you saw today.”

It was the first time the Raiders had committed five turnovers in a game since a Christmas Day loss to the Eagles in 2017.

“Any time you turn the ball over like that, you’re not going to win football games,” said Carr, who had three fumbles and an interception that was returned for a touchdown. “It’s very rare. We haven’t felt this way in awhile. It’s a gut punch for sure.”

Raiders’ kicker Daniel Carlson was one of the lone bright spots for the Raiders on Sunday, making both of his field goal attempts.

Carlson accounted for all of the Raiders points, connecting from 29 and 24 yards.

The two field goals give Carlson 100 points on the season, the second-most in the league.

His point total through 11 games rank first in franchise history, ahead of the 97 scored by Sebastian Janikowski in 2010.

Carlson is now 23 of 25 on the season and has made all four of his attempts outside of 50 yards.

He has also been successful on 31 of 32 extra-point attempts.

Safety Johnathan Abram led the entire defense the length of the field to celebrate after he intercepted Matt Ryan in the first quarter. It was Abram’s first interception of the season.

Abram turned back the clock by doing the “Dirty Bird,” a dance popularized by Falcons running back Jamal Anderson.

Anderson’s career spanned 1994 to 2001 with the Falcons. He scored 41 touchdowns with Atlanta and first did the famous dance in a Week 7 win over the Saints in 1998.

Atlanta’s Calvin Ridley returned the favor when he simulated rolling dice after scoring a touchdown.

First-round pick Henry Ruggs was targeted five times on Sunday, equaling the season-high he set in the opener at Carolina.

He hauled in three of those targets for 56 yards, including a 36-yard grab on a fourth down to set up the Raiders inside the 5-yard line on the last play of the first quarter.

The 56 yards marked his second-best total, behind only the 118-yard effort he had in the road win over the Chiefs last month.

Ruggs had only eight catches for 79 yards in the five games since that breakout performance, but he wasn’t about to spike the football on Sunday.

“I’m not really a personal stat guy,” he said. “I don’t care. When my opportunities come, I make my plays. But in a game like this, there’s not much to celebrate. We’re not clicking on all cylinders. To celebrate a personal play after that would be selfish. I’m not that type of guy.”