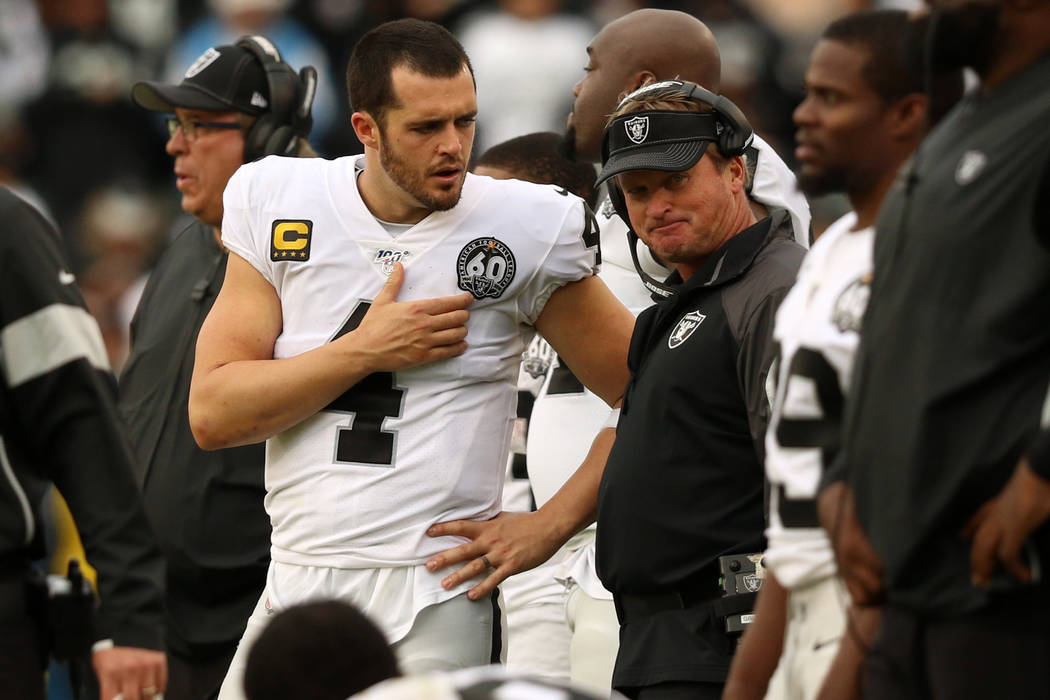 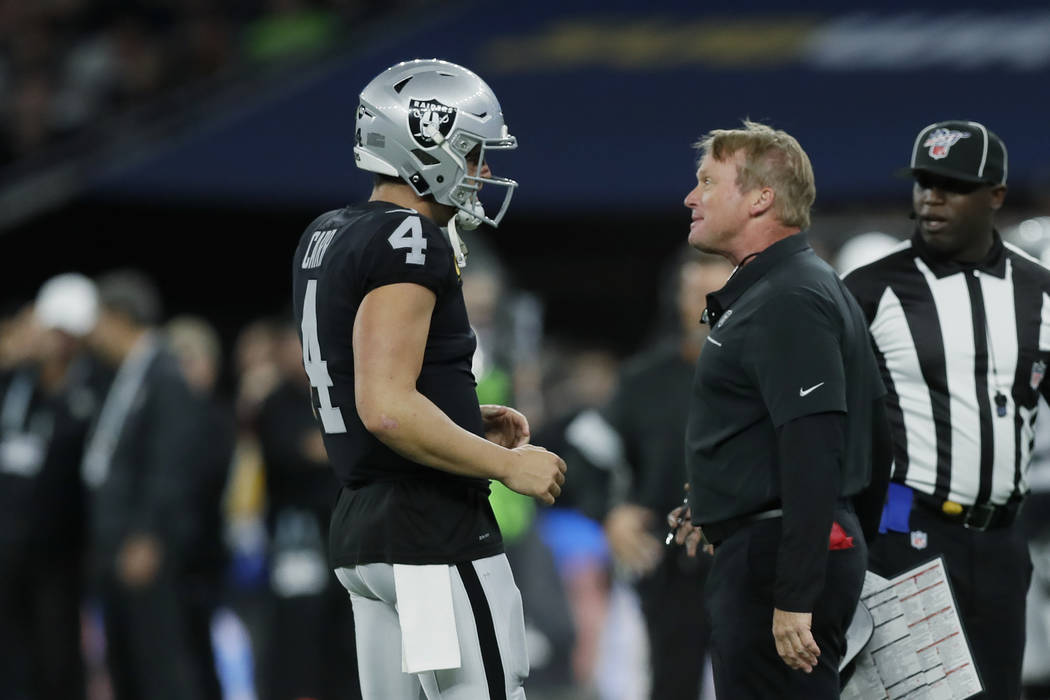 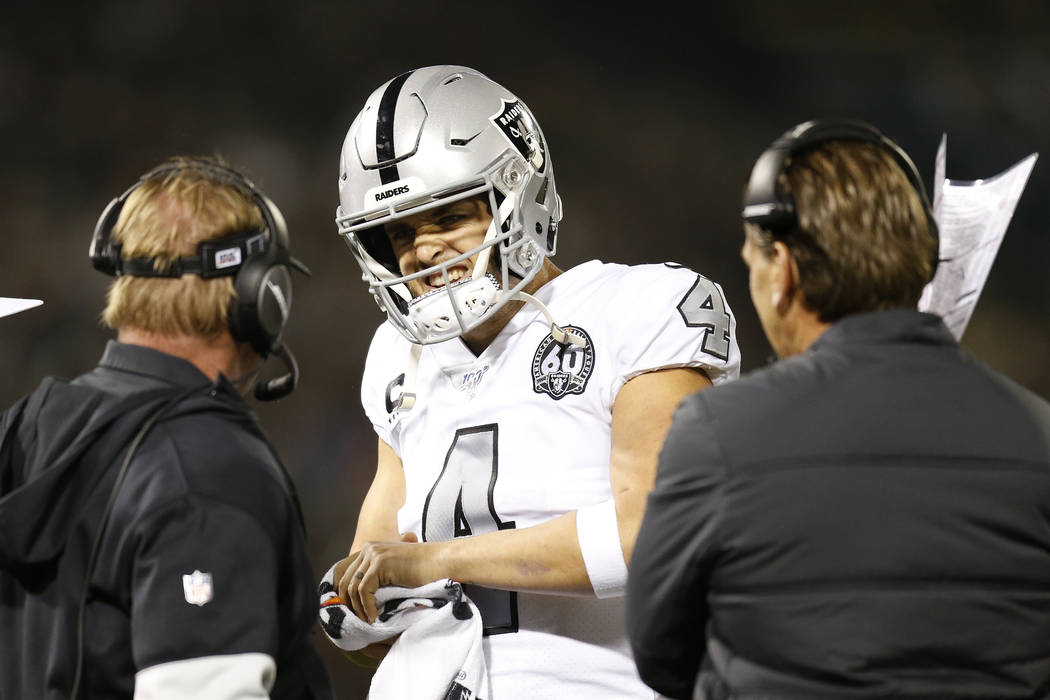 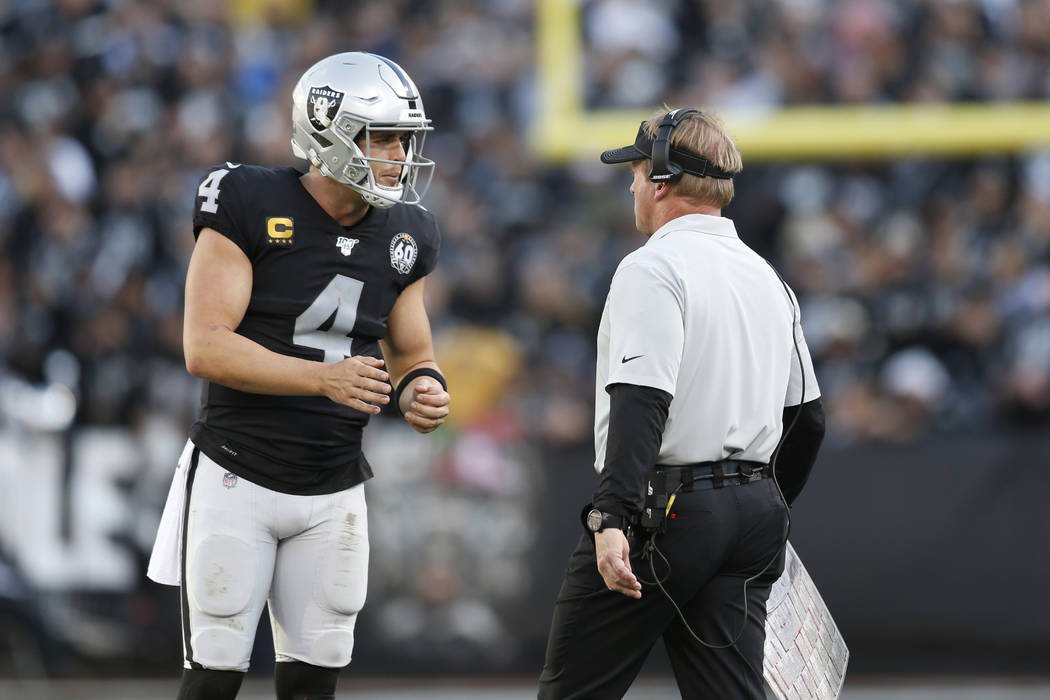 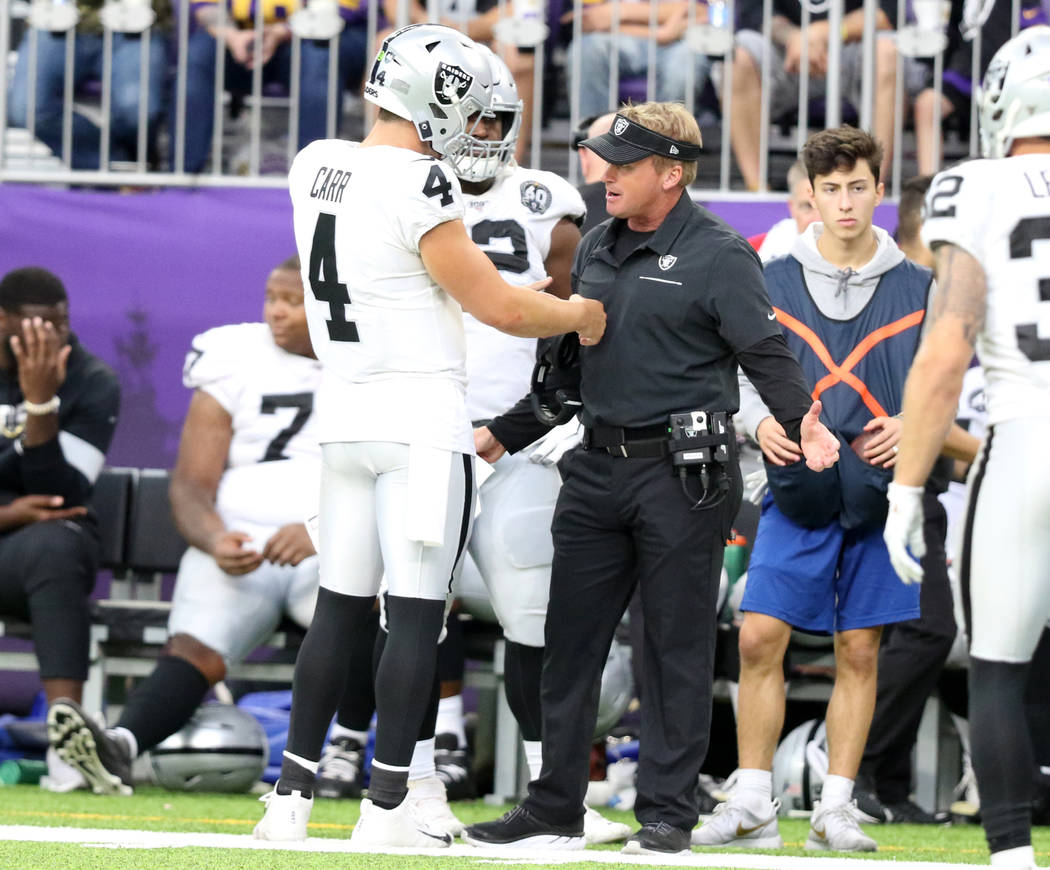 As the Raiders’ season winds down with or without a postseason berth, the focus will quickly shift to 2020.

Sure, the move to Las Vegas is a big part of the equation, but the question of who will be taking snaps from center is probably the most important one entering the offseason.

There have been some loose reports about the Raiders perhaps moving on from Derek Carr after this season. There will probably be more to come.

Carr’s contract allows them to move on from him at any point after this season with little impact on the team’s salary cap. But a move away from Carr will not be an economic decision — the team has some $60-plus million in cap space for next season with Carr on the books.

No, this will come down to a very simple question for coach Jon Gruden and general manager Mike Mayock: Is Carr capable of making the plays needed to push this team over the top?

A careful examination of the coaches’ film in the second half of the season, with a special emphasis placed on the Raiders’ four-game losing streak that all but sunk their postseason hopes, revealed a mixed bag.

Mostly, Carr has played very good football for a team that is obviously lacking much high-end passing talent outside of tight end Darren Waller. But there were certainly times in each game when a more aggressive Carr could have taken some risks to give the Raiders a shot. And it seems like Gruden is looking for that type of player.

“I’m getting old now. I wanna let it fly,” Gruden told Chargers reporters last week. “… I want big plays. I want excitement. These bubble screens and check downs only go so far with me.

“I want to be aggressive and I want to try to make some big plays. Especially if you’ve got the offensive line and supporting cast to back it up.”

If the Raiders do at least start the process of adding to the position — and with just journeymen Mike Glennon and DeShone Kizer at the position, it would behoove them to give the team better options going forward — then these are the key moments when Carr could have lifted the team but did not.

Oakland trailed 13-3 late in the second quarter and the team was looking for a spark on second-and-7. One of the staples of the West Coast offense is the smash concept, a two-player combination that stresses zone coverage with a short route paired with a corner route to the sideline. Waller went into the flat, and Zay Jones appeared to be open on the corner but Carr threw short left and incomplete to Jalen Richard.

On third down, Carr didn’t give Hunter Renfrow a chance at the first-down marker and the Raiders punted.

Oakland trailed 21-0 with 1:15 left in the first half but, with the ball at the Kansas City 26, had a chance to stay in the game with a touchdown. The Chiefs switched coverages after the snap, but Waller had room in the middle of the field and Tyrell Willams deep right if Carr gave them a chance. Instead, he threw a low-percentage ball out of bounds left to Jones and had to settle for a field goal.

If Gruden started to fall out of love with Carr, you could probably highlight three successive failed third downs in the third quarter in this crucial game as the turning point.

The Titans came with pressure but the Raiders had it blocked. Still, Carr climbed the pocket sensing a chance to run for it, but he missed both Keelan Doss and Jones coming open if he was more patient. Carr was sacked and the Raiders punted.

On third-and-8 on the next drive, Carr had time and plenty of options in Waller (corner route), Williams (low crosser) and Jones (deep dig). Carr threw late and incomplete and the Raiders punted.

Titans led 28-21 and the Raiders faced third-and-4 when Carr appeared to change the play at the line to a bubble screen as he thought Tennessee was playing soft off-coverage. They actually came with a corner blitz and the play only gained 1 yard. Gruden can be seen exasperated on the sideline.

Oakland could have taken a more commanding lead in the first half with better decisions by Carr. With five minutes left in the first quarter, Carr forced a ball to Waller in the end zone on third-and-7 when Jones and Richard both were better options on crossing routes. Oakland got a field goal.

On second-and-7 with 4:23 left in the second quarter, Carr threw a short checkdown incomplete to Josh Jacobs very quickly when Williams was open with one-on-one coverage across the field. Gruden could be seen showing frustration with his palms up.

Leading 16-6 with 12:41 left in the fourth quarter and looking to put the game away, Carr threw a checkdown for minus-3 yards when Jones, Waller and Williams were all in position to make a play to give the Raiders a more manageable distance on third down. Instead, Carr was sacked and they punted.

And possibly the worst decision made by Carr was with 27 seconds left and both Waller and Jones had a chance to make a play — heck, even a chance at a pass interference penalty — but Carr threw the ball out of bounds and burned nine valuable seconds. Even former Raiders quarterback Rich Gannon was heard on the telecast pleading for Carr to just “throw it” to give Oakland a chance. Carr did not, and the Raiders fell in the final game at the Black Hole.

There’s a lot to like about Carr’s game. There were plenty of times he made terrific plays to give the Raiders a shot at winning. But when it comes down to it, Gruden prefers to be a swashbuckler without a conscience. He is unafraid to try the plays that are the difference between winning and losing — and quickly forgets when the plays don’t go his way.

If you’re a Carr backer, there’s plenty on tape that says he can get the job done with a better surrounding cast. If you think Carr just won’t be good enough at the end of the day to win a Super Bowl, there’s plenty there, too.

The smart play is for the Raiders to start on both paths — continue with Carr, but find the guy who will compete for his job at some point — and then make the difficult decision down the road. Because it’s certainly not black and white right now for the Silver and Black.