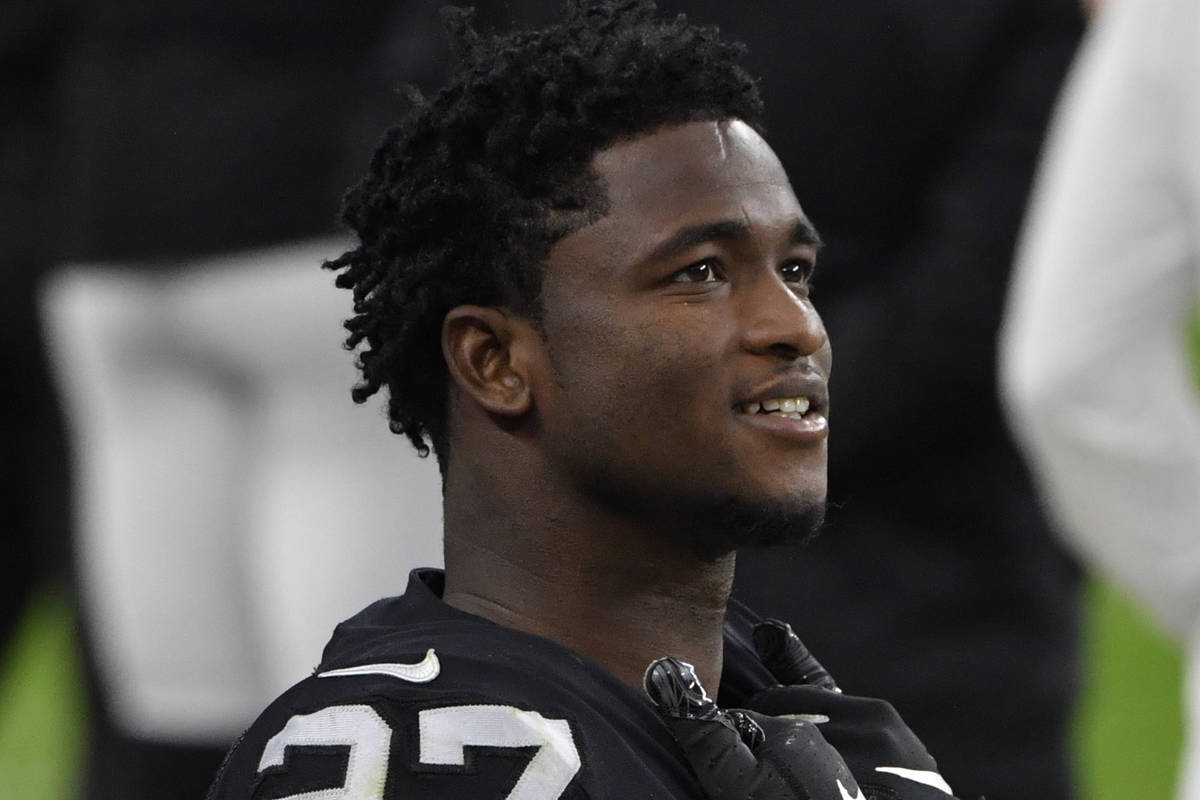 Las Vegas Raiders cornerback Trayvon Mullen #27 is seen on the sidelines during the second half against the Denver Broncos during an NFL football game, Sunday, Nov. 15, 2020, in Las Vegas. (AP Photo/Jeff Bottari)

Falling to the seventh and final spot in the AFC playoff standings after losing to the Kansas City Chiefs on Sunday, the Raiders have little margin for error over their next six games.

It is incumbent, therefore, that they beat inferior teams.

That means taking care of the Atlanta Falcons on Sunday in Atlanta. In spite of Jon Gruden’s insistence that the Falcons are one of the best 3-7 teams he’s ever seen — and there is some merit to that given their talent — this is a team the Raiders should handle.

To do that, here are three key matchups.

According to Pro Football Focus, Trayvon Mullen is ranked 69th among NFL cornerbacks, a clear sign that he is still a work in progress in his second season. His pass coverage grade, according to PFF, puts him at 48th at his position.

He will have his hands full against Jones, who PFF ranks sixth at wide receiver. Jones has 45 catches for 677 yards and three touchdowns and brings a level of expertise, athleticism and physicality that Mullen has not seen this season.

Mullen is a big, physical defender not afraid to mix it up. His ability to contest Jones at the line of scrimmage will be key in slowing him down. But he has to be prudent with his physicality. Jones makes defensive backs pay for their aggressiveness with his deft footwork and body control out of his stance.

Mullen has to understand he will give up receptions. That is just the way it goes. But he can’t get discouraged and must get Jones to the ground immediately after a catch.

In spite of Crosby’s team-leading six sacks, there are prolonged stretches in which he simply isn’t a factor. When Crosby isn’t getting pressure on the quarterback, he becomes almost a liability as his run defense is still a work in progress.

That accounts for his 97th ranking among NFL edge rushers, according to Pro Football Focus. It is not yet certain if the Raiders will get Cle Ferrell back on Sunday — he came off the COVID-19 list Thursday — but either way, Crosby can lend a big assist with a productive pass rush while honoring his run responsibilities.

McGary is ranked 51st among NFL tackles, according to PFF, and has surrendered 20 quarterback pressures, four sacks and 11 hurries.

He presents a matchup that Crosby should win. If he does, he is in line for a big game.

With just 14 receptions for 256 yards, Ruggs hasn’t had the production worthy of the 12th pick in the NFL draft.

He is ranked 116th of 121 wide receivers, according to PFF. But his speed has changed the way opposing defenses defend the Raiders and, as a result, opened the field for his teammates.

Nevertheless, it behooves the Raiders to figure out ways to get their rookie the ball. He remains a dynamic playmaker able to turn routine routes and sweeps into touchdowns.

Ruggs should square up often against fellow rookie A.J. Terrell, who has had a productive first season and is tied for 19th in PFF’s cornerback rankings.

While Ruggs has the edge in speed, Terrell is savvy beyond his years and presents a host of cover skills. If the Raiders are intent on getting Ruggs the ball, that should create a handful of opportunities for him to make big plays.