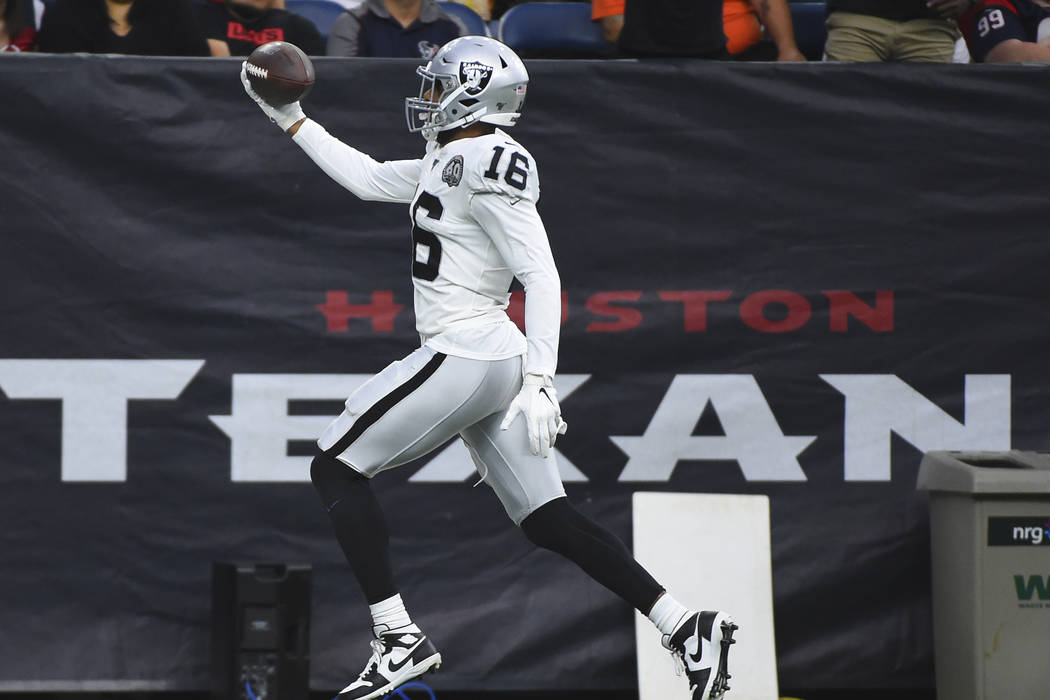 Oakland Raiders wide receiver Tyrell Williams (16) scores a touchdown against the Houston Texans during the second half of an NFL football game Sunday, Oct. 27, 2019, in Houston. (AP Photo/Eric Christian Smith)

ALAMEDA, Calif.—Raiders wide receiver Tyrell Williams still has a lot of friends on the Chargers.

They may not be hearing from him much this week.

Williams admitted he will have “a lot more juice” when he takes the field on Thursday night as the Raiders’ primary wide receiver against the team he played for the first four years of his career.

It’s the first time he will face his old team since signing a four-year, $44 million contract with the AFC West-rival Raiders this offseason.

“It’s definitely going to be weird, but I’m excited,” Williams said after practice on Tuesday at the team facility. “It’s going to be a lot of fun.”

Williams, who will now face the Chargers twice a year, will be quickly reacquainted with the defensive backs assigned to cover him.

“I’ve been going against those guys for four years in practice every day,” he said. “I’ve had a lot of reps against them.”

Williams has prototypical size (6-4, 205) and good speed, but flew under the radar at Western Oregon and went undrafted. He signed as a rookie free agent with the Chargers and flourished during his stint in the organization.

After being limited to two catches (one an 80-yard touchdown) as a rookie, Williams broke out with a career-high 69 receptions for 1,059 yards in his second year when star wideout Keenan Allen was injured in the first game.

He served as a complementary receiver to Allen the last two seasons and earned the big payday from the Raiders.

Williams stepped out of Allen’s shadow when he signed with the Raiders, but his role as the clear No. 1 in Oakland wasn’t solidified until Antonio Brown was released just before the regular season. He has embraced the opportunity.

The 27-year-old has 23 catches for 355 yards despite missing two games with a lingering foot issue. He had also scored a touchdown in every game he played until last week against the Lions.

“It’s something I’ve always wanted and always worked toward,” Williams said of being a No. 1 receiver. “We had a lot of good receivers with the Chargers. I think it helped me to see how those guys did it and try to be that when I get that opportunity. “

After fighting through his foot injury, Williams said he’s “feeling close to 100 percent” and is ready “to get back to how I started the season.”

His success has come as no surprise to Chargers coach Anthony Lynn, who joked with reporters Tuesday that part of the Raiders’ success on offense comes from “stealing” Williams away.

“Tyrell is a heck of a player,” Lynn said. “He can line up all the way across the board at receiver. He can read coverages. He can get open. He’s developed into a good route-runner. … And just his size. He’s a physical presence. He’s a tall receiver with speed.”

Raiders quarterback Derek Carr is certainly glad to have him around.

He said part of what makes Williams unique as a No. 1 is that he doesn’t act like it.

“He works his tail off, very selfless,” Carr said. “I’m glad we have him. It was money well spent.”

Williams hopes to keep earning it. His biggest frustration this season has been dealing with the plantar fasciitis that has kept him out of two games and often limited him in practice.

“It’s been not exactly how I wanted this year to go,” he said. “I started to feel a lot better last week. … It’s about getting healthy because I know I can make every play.”

That starts with a game he admits he had circled on the schedule when it was first released.