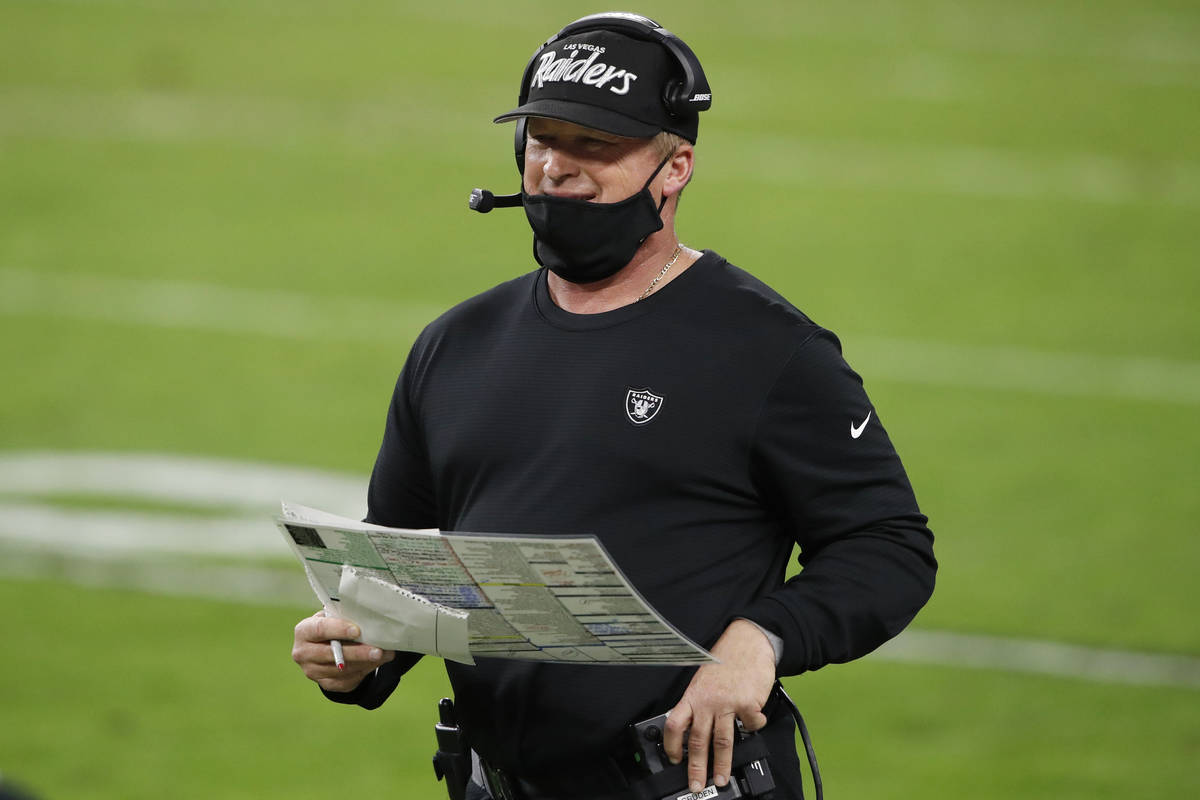 Las Vegas Raiders head coach Jon Gruden stands on the sidelines during the second half of an NFL football game against the Miami Dolphins, Saturday, Dec. 26, 2020, in Las Vegas. (AP Photo/Steve Marcus)

Jon Gruden doesn’t plan to take a whole lot of time off now that the Raiders have reached the offseason.

Vacations are a luxury earned by winners.

“Our goal is not 8-8,” he said Monday, a day after his team pulled off a dramatic victory to finish at .500. “Our goal is to win a championship and you shouldn’t go on a cruise or go on a vacation when you’re 8-8. We got to take a good look at how we can close the gap.”

Gruden and general manager Mike Mayock have an immediate project to work on before laying the foundation for the rest of their offseason work.

The duo must decide on a new defensive coordinator, a search that is already in full swing.

Once that decision is made, evaluations can continue on the current roster to decide who will still be around as the Raiders continue to build what they hope is a contender.

Gruden said he will give his staff a little time off, but insisted there is too much work to do to take too much time away from the team facility.

“We feel like we did (compete) to a degree with the best teams in the league, but we’re not there yet,” he said. “We’re going to volley the ball to Mike Mayock and his staff right now and they are going to give our coaches, and me included, some direction in terms of who’s available in this year’s draft.

A victory in Sunday’s regular-season finale over Denver gave the Raiders some positive momentum heading into the offseason and ensured the team its best record since Gruden’s return in 2018.

That 8-8 mark also locked the Raiders into the No. 17 spot in the first round of April’s NFL draft.

The Raiders choose behind Arizona in the first round because of a strength-of-schedule tiebreaker, but the teams will flip-flop in round two.

Dallas selected receiver CeeDee Lamb with the No. 17 pick in the 2020 draft.

Miami is the only non-playoff team picking behind the Raiders as the 10-6 Dolphins will select at No. 18, though the Dolphins also have Houston’s pick at No. 3.

The end of the season also means the Raiders’ 2021 opponents are finalized, at least for now.

Eight home and eight road games are locked in, though the dates won’t be announced for several months.

There is also a strong possibility the league will finalize plans for each team to play a 17th regular-season game starting next year.

For now, the Raiders will have both home and road games against divisional opponents in the Chargers, Chiefs and Broncos.

Baltimore and Cincinnati of the AFC North and Philadelphia and Washington of the NFC East will visit Allegiant Stadium.

The Dolphins will return next season as a result of finishing second in the AFC East.

Indianapolis finished second in the AFC South, earning the Colts a home game against the Raiders, who will also visit Cleveland, Dallas, Pittsburgh and the Giants.

Should a 17th game officially be confirmed by the league, the opponent would be the Bears. It’s not clear where that game would take place.