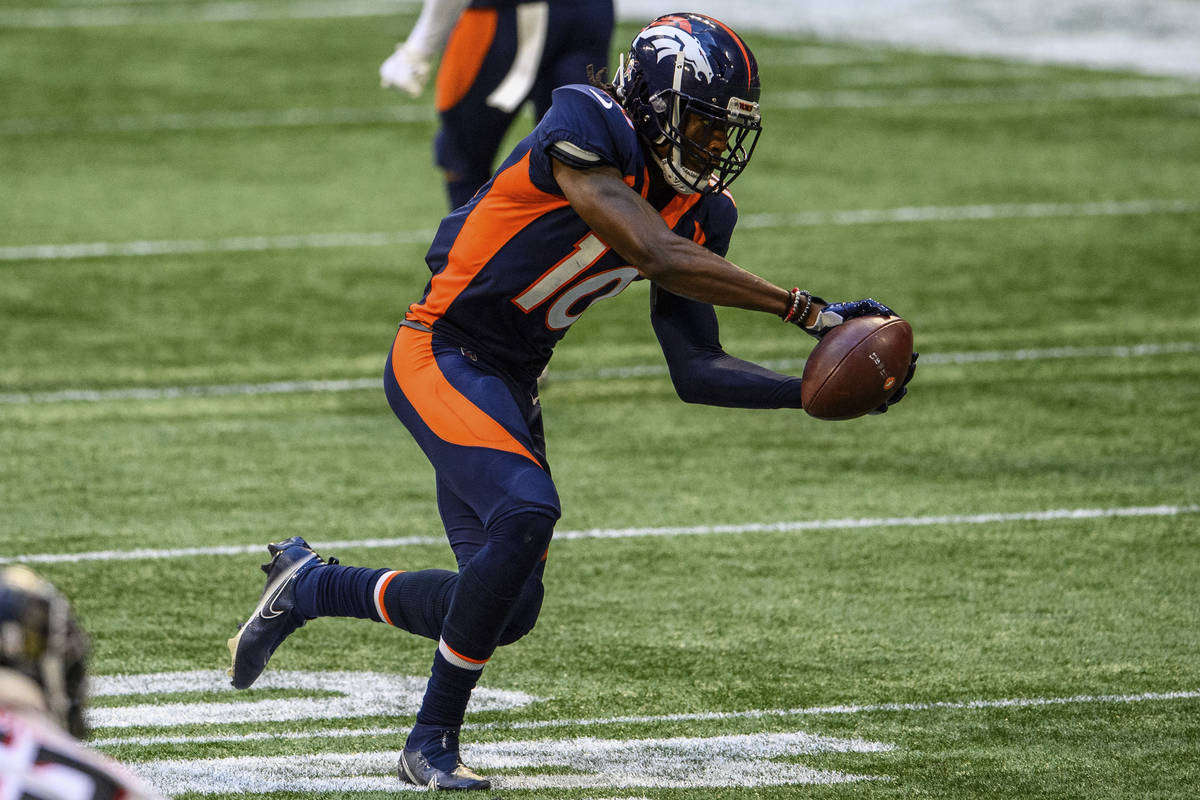 Denver Broncos wide receiver Jerry Jeudy (10) catches a pass during the second half of an NFL football game against the Atlanta Falcons, Sunday, Nov. 8, 2020, in Atlanta. The Atlanta Falcons won 34-27. (AP Photo/Danny Karnik) 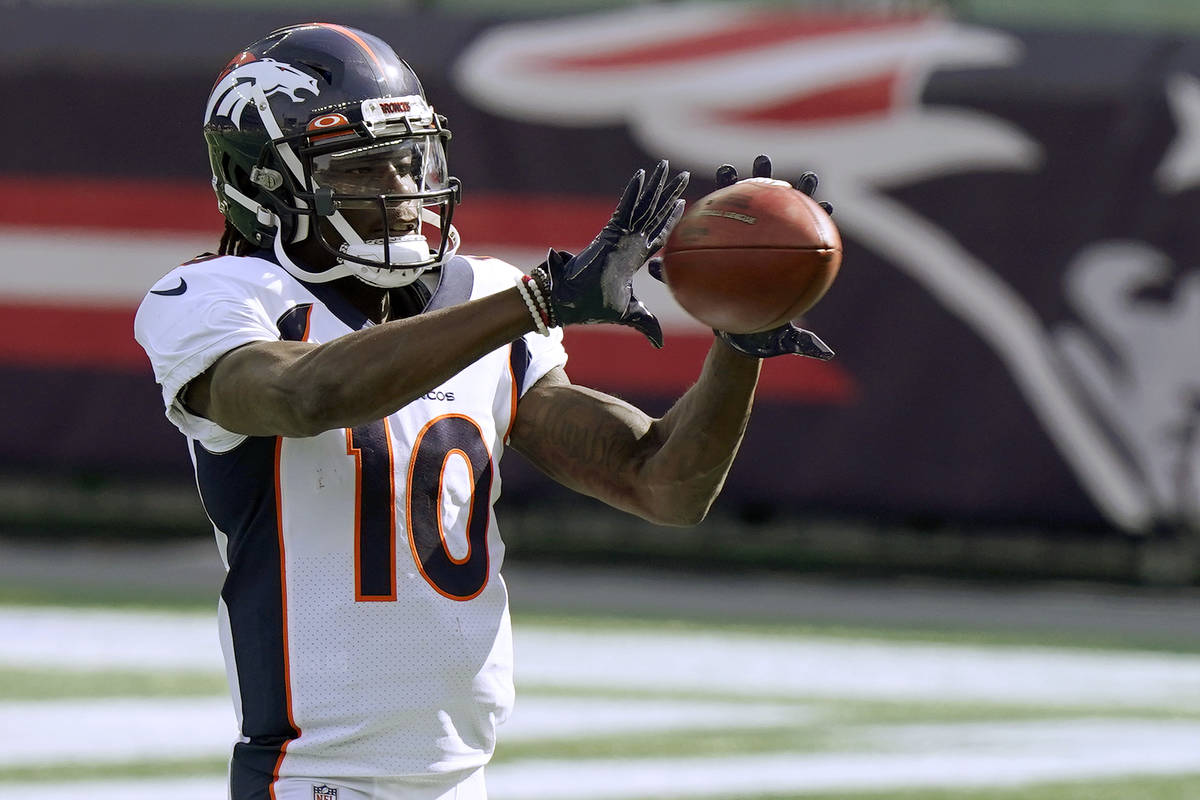 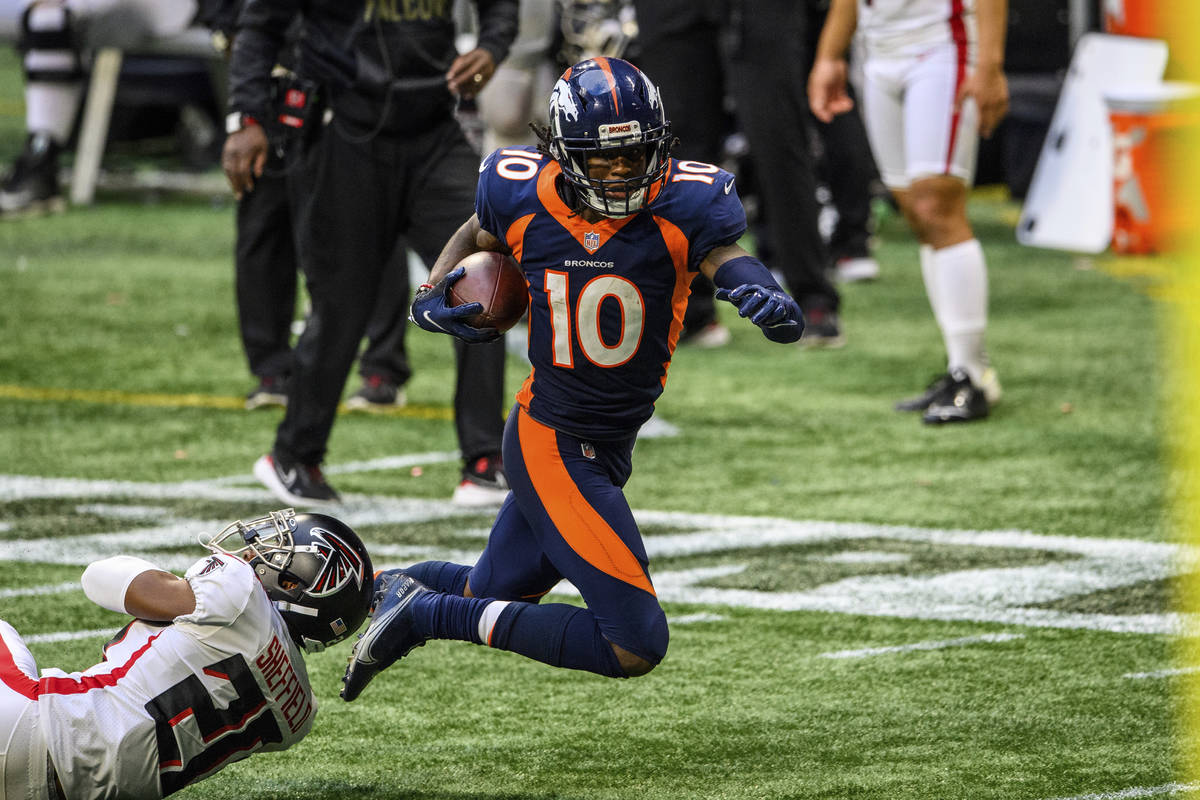 Raiders coach Jon Gruden was effusive in his praise of a certain rookie wide receiver earlier this week. He’s one who played the last three years at Alabama and was drafted in the first round to invigorate an ailing passing offense in the AFC West.

“He’s smooth. That’s the best way to define him,” Gruden said. “He really knows how to creatively express himself on the football field. I love watching him play.”

The wide receiver? Not the Raiders’ Henry Ruggs. Rather his former teammate at Alabama, Jerry Jeudy.

Gruden and the Raiders could have drafted Jeudy, who plays for the rival Broncos and has 30 receptions for a team-high 484 yards and two touchdowns. Instead, they will try to defend him Sunday afternoon at Allegiant Stadium.

That’s a task they figure to face for years to come.

Ruggs was the fastest receiver in the rookie class, clocking multiple 4.2-second 40-yard dashes during workouts before the draft. But Jeudy was the most polished, utilizing precise footwork and uncanny, veteran savvy to create separation in the SEC and now in the NFL.

“He’s one of the most sophisticated and best route runners we’ve seen come into the league in a long, long time,” said Pro Football Focus analyst Sam Monson. “Certainly the best since Amari Cooper,” he added, referring to the Dallas Cowboys standout the Raiders drafted No. 4 overall in 2015.

Monson said Jeudy’s ability “just immediately translates. It works at the NFL level. … Every single week, there’s a few plays where he puts a defensive back in a blender and gets a ton of separation.”

Ruggs was the speedster at Alabama. Jeudy, the technician.

Former Crimson Tide quarterback Tua Tagovailoa said Wednesday that he was “very fortunate to have been teammates with those guys” and knows as much as anyone about the kind of pressure they put on opposing defenses.

“They’re both really different,” said Tagovailoa, who was drafted No. 5 overall by the Miami Dolphins and is 2-0 as their starter. “Henry is really explosive. He’s really fast. Everyone knows that. You can throw it at whatever radius you want to, and he’ll go and get it. And with Jerry, Jerry is a playmaker. Those big-time plays, Jerry is going to make those for you. His route running, I believe it’s superb.”

Draft gurus could not come to a consensus regarding the best wide receiver prospect. The NFL Network’s Daniel Jeremiah characterized the 2020 affair as a “flavor draft.”

“The Raiders were really, really honed in at trying to get more dynamic and explosive” with the No. 12 pick, Jeremiah said, electing to make Ruggs the first receiver drafted in April. Denver selected Jeudy with the No. 15 pick.

But Monson said he prefers receivers like Jeudy who are able to separate from defenders. “Their calling card is route running and being open every single down. … It’s very hard to be bad when you do that well, because you’re going to give the quarterback such a great picture every time he looks up.”

The Raiders remain high on Ruggs, who has 10 receptions for 220 yards and one TD in six games. The Broncos are also high on Jeudy, who registered seven receptions for 125 yards and a score last week during a 34-27 loss to the Atlanta Falcons.

Denver coach Vic Fangio told reporters on Monday that he believes Jeudy is maturing mentally and learning how to practice and prepare like a professional.

“I think I’ve seen him grow the most in his mindset. He’s come out and practiced better in the last few weeks,” Fangio said. “He’s adjusted to playing in the NFL. It’s quite a different game than what he’s used to in college football. I really like where he’s at and where he’s headed.”

Pro Football Focus supplies analytical data to all 32 NFL teams and gives Jeudy a grade of 66.9, good for seventh among rookie receivers and 70th among 116 qualified receivers. Ruggs grades out at 56.9, 13th among rookies and 108th overall.

Yet Jeremiah doesn’t believe Ruggs’ lack of production is a cause for concern, noting that his speed alone can force opposing defenses to alter their respective coverage schemes.

“It’s a two-way street. It’s him getting a little bit more refined and it’s the Raiders figuring out how to use him and … and give him more opportunities,” said Jeremiah, who worked as a scout for the Baltimore Ravens, Cleveland Browns and Philadelphia Eagles before joining NFL Network in 2012.

“I don’t think anyone expected him to come out and catch 80 balls as a rookie That wasn’t going to happen. There’s a little bit of a development still to go there,” Jeremiah added.

Fangio is also effusive in his praise for Ruggs and told reporters during the week that the Broncos “liked him a lot during the draft.”

“I think he’s done a good job in improving throughout the season in his play, his route-running ability, his catching ability,” he said. “They got a really good player there who’s going to be good for them for a long time.”

The same can be said about Denver and Jeudy.

The former Alabama teammates are now adversaries, making their respective transitions from Bryant-Denny Stadium to the rigors of the AFC West.

“I think both teams feel good about what they have … They both fill a need,” Jeremiah said. “I think the 2021 version of these guys is going to be much better than what you see right now.”