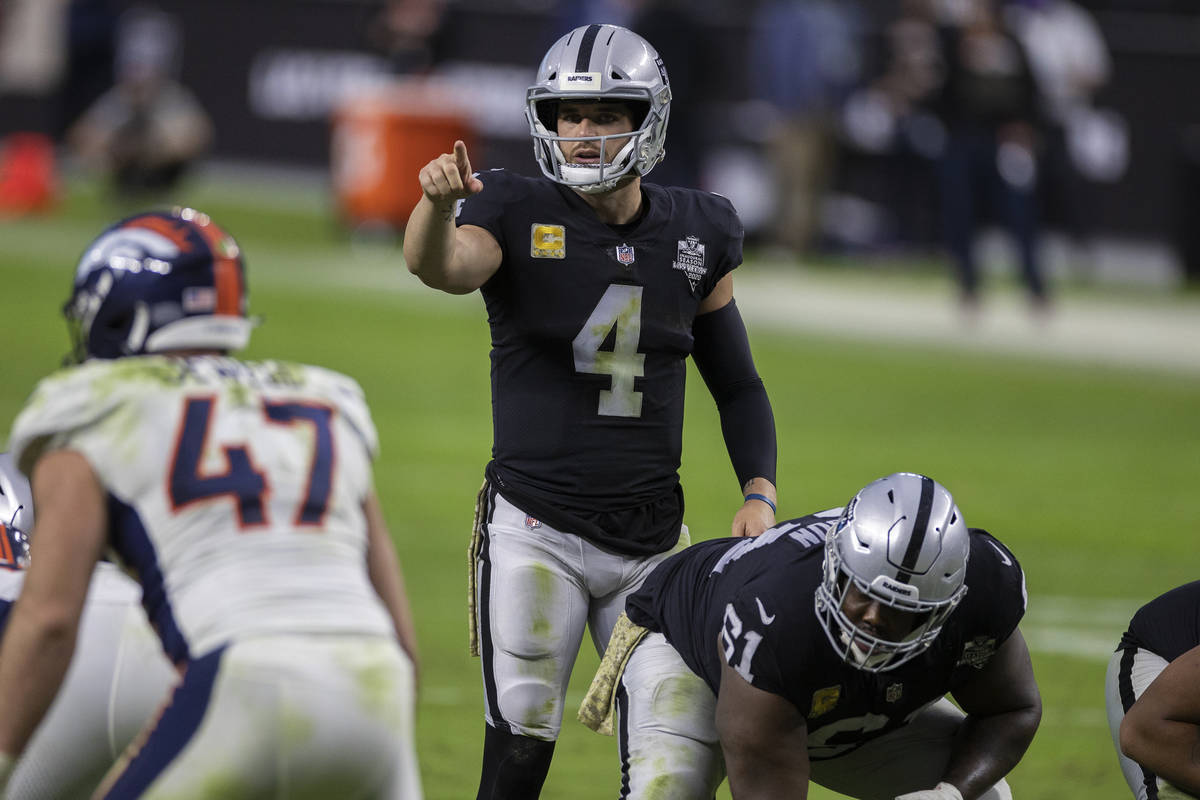 The Raiders are heading down the homestretch. Their playoff lives depend on what happens over the next four weeks.

Their fans are anxious, as this week’s mailbag proves, and have plenty of questions and concerns.

Steve G. (@GladsonSteven): What are the odds that Josh Jacobs and Trent Brown will be healthy enough to play Sunday? Also, after the season do you think Jon Gruden and Mike Mayock will make a change at defensive coordinator?

Vincent Bonsignore: As of Friday afternoon, both Jacobs and Brown were listed as questionable, but the sense is both have a good chance of being out there against the Colts. There is no question both are needed, as it is incumbent on the Raiders to get the run game going. As for Guenther, these next four weeks will be important as the Raiders assess both the coaching staff and players.

Stephen Andrew (@dukedevil14): What would it take for Derek Carr to go down as the top Raiders quarterback in the eyes of the majority of Raider Nation?

VB: Without question, it will come down to postseason success. If Carr is able to put together an impressive playoff resume, he will be in position to go down as the best quarterback in franchise history.

That said, when you look back through Raiders history, aside from Kenny Stabler, all their other “great” quarterbacks were short-term players brought in from other organizations. In that sense, if Carr can have postseason success and end his career with the team that drafted him, I would imagine all of that, including the career stats, would have him near the top of that list.

Brian Montenegro (@MonteDaPython): What’s going on in Derek Carr’s head this week? Four years ago he was in a similar situation — a team on the brink of the playoffs — and then the Colts came and broke his leg. Is this a revenge game for him?

VB: Revenge game? Probably not. Knowing how players think about injuries, that is the last thing on Carr’s mind. Now, when it comes to importance, Carr has maintained that the Raiders are in single-elimination mode. He understands if the Raiders win out, they make the postseason. That is a guarantee. So he wants this game really, really badly.

Mikey moreno (@ELARAIDERMIKE): What is going on with the run game? The last two weeks it seems like we just forgot all about it. We can’t have Derek Carr throwing it 50 times a game. That’s not what this team is built on.

VB: It’s a combination of factors: The broken ribs of fullback Alec Ingold have lessened his ability and role as a lead blocker. He is a much bigger part of the run game than some might think. It’s no shock that the Raiders’ three-game slide in the run game coincides with Ingold’s injury. The patchwork offensive line has shown some slippage the last few weeks as well, and Josh Jacobs is not healthy. As Jalen Richard alluded to this week, the Jets stacked the box with eight and nine defenders daring the Raiders to run the ball.

Ingold, Jacobs and right tackle Trent Brown all being healthy and on the field together will certainly help get things untracked. It is imperative that happens because the Raiders clearly need that run game.

Patrick (@RaiderPat33): Besides the defensive line, what are the Raiders’ biggest draft and free-agent needs? The position groups seem more solid this year than in years past. Obviously the defensive line needs big help.

VB: With the offense pretty much set — save for right tackle — the sense is the Raiders will devote the bulk of their draft and salary cap assets to defense. And rightfully so. A difference-making defensive lineman, be it inside or outside, is a must. A rangy, sideline-to-sideline linebacker is absolutely needed. A safety to start alongside Johnathan Abram is also very much on the wish list.

Much like the Raiders did by doubling up at wide receiver in last year’s draft, it’s quite possible they double-dip at those positions in both the draft and free agency.

VB: The curious case of David Irving will linger at least one more week. The veteran defensive end is dealing with an undisclosed injury and remains on the practice squad. When he gets healthy, he’ll get thrown into the mix and, as Gruden said this week, the Raiders will open competition every Wednesday to try to determine the best eight defensive linemen to suit up on game day.