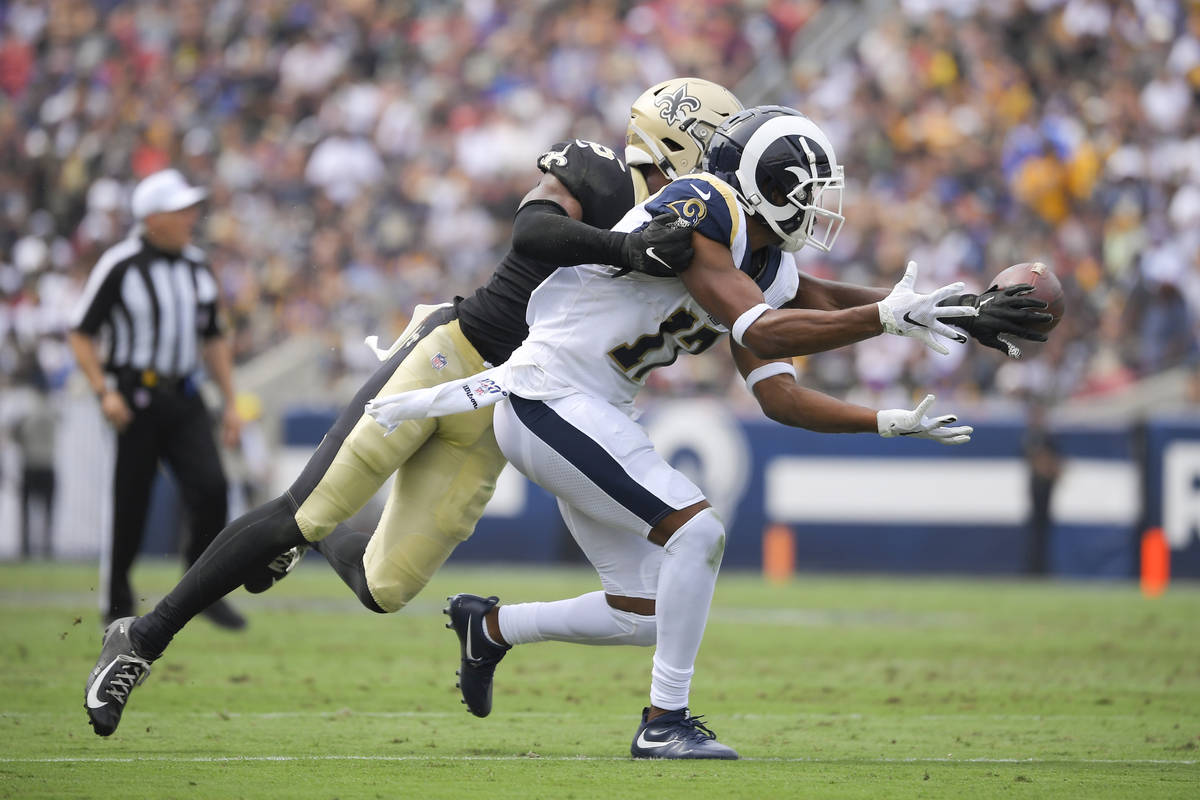 The Raiders made a strong push in the first week of free agency to add one of the premier cornerbacks. But they bowed out of the Byron Jones chase when the Miami Dolphins extended a record-breaking offer to the former Dallas Cowboys star. Then Denver Broncos standout Chris Harris Jr., another Raiders target, signed with the Los Angeles Chargers.

As a result, Eli Apple became the fallback plan. For now, he and promising second-year player Trayvon Mullen are penciled in as the starting cornerbacks.

After a rough start over his first year-plus with the New York Giants, Apple found his footing the last two seasons with the New Orleans Saints as a capable starter on back-to-back playoff teams.

In fact, his arrival in New Orleans in 2018 coincided with a midseason improvement in pass defense. The Saints increased their sacks per game by more than one — 2.1 per game without him compared to 3.2 with him — trimmed the pass touchdowns allowed from 2.1 per game to 1.5 and held quarterbacks to a 91.5 quarterback passer rating compared to 112.2.

The Saints followed that last season by allowing an 88.3 passer rating while coming up with 13 interceptions and 51 sacks.

Apple wasn’t entirely responsible, obviously, but his presence across the field from Marshon Lattimore helped solidify the Saints’ secondary. It allowed P.J. Williams to slide into the slot role and enabled the Saints to be much more aggressive and confident playing press man-to-man cover schemes rather than the zone defense they played for most of the first six games without him.

Apple’s press-coverage skills most interested the Raiders. With the athletic, 6-foot-1-inch Apple playing alongside the 6-2 Mullen, the Raiders now have two rangy, physical, athletic cornerbacks who can defend man to man.

By adding dependable Dallas safety Jeff Heath to play alongside Johnathan Abram, who missed almost all of his rookie season last year with a shoulder injury, the Raiders can comfortably head into 2020 with their starting defensive backfield relatively set.

That will not preclude them from adding a cornerback or safety via the draft — in fact one or the other or both is almost inevitable — but they now don’t have to reach to desperately fill a starting position.

Here is a closer look at their secondary:

Mullen and Apple are the starters, but the Raiders still have high hopes for Isaiah Johnson, their fourth-round pick last year out of Houston who was cut down as a rookie by a nasty jaw injury in the preseason and then a back injury that required minor offseason surgery.

The setbacks were especially costly for Johnson, who played just two seasons at cornerback in college after arriving at Houston as a wide receiver. The speedy 6-2 Johnson made a rapid ascent at cornerback to put himself on the NFL radar, but his fourth-round draft status indicated teams viewed him more as a developmental prospect rather than an immediate starter.

The injuries cost him valuable developmental time, but the Raiders remain bullish on their rangy, athletic second-year player. He’ll have a chance in training camp to work his way into the rotation.

Lamarcus Joyner, while technically a safety, played the slot corner for the Raiders last year and is expected to do the same this year. The Raiders also quickly re-signed reserve corner Nevin Lawson after last season, a pretty good indicator they value his experience and production as a depth player.

Keisean Nixon, who made the Raiders as an undrafted free agent last year, former fourth-round pick Nick Nelson and Dylan Maybin, who spent last year on the practice squad, all remain on the roster and will battle for spots in training camp.

The Raiders have high hopes for Abram, a first-round pick last year who played in just one game after suffering a season-ending shoulder injury in Week 1. Barring any setbacks, he and Heath, a steady, physical defender, are expected to be the starters.

However, while Heath is a strong run defender who was often used as a de facto linebacker in Dallas while lined up in the box, he is just an adequate cover safety. Erik Harris, who started 14 games for the Raiders last year, is more effective in pass coverage, so there could be some interchanging or partnering when the Raiders play three-safety sets.

Beyond that, only Dallin Leavitt, who appeared in 15 games last year, mostly on special teams, remains under Raiders control as an exclusive-rights free agent.