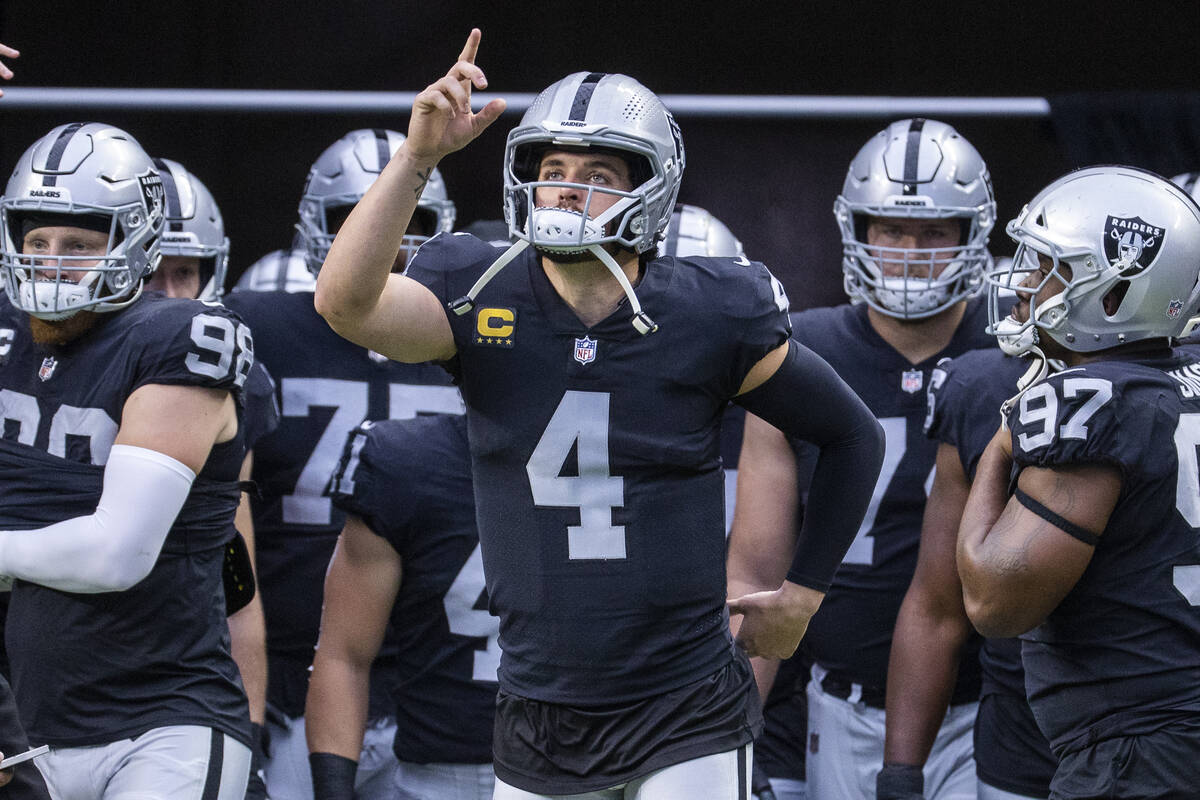 Raiders quarterback Derek Carr (4) points to the heavens when entering the field with teammates to face the Denver Broncos the first half of their NFL game at Allegiant Stadium on Sunday, Dec. 26, 2021, in Las Vegas. (L.E. Baskow/Las Vegas Review-Journal) @Left_Eye_Images

The most direct path for the Raiders to qualify for the NFL postseason is by beating the Chargers at Allegiant Stadium on Sunday night.

Win and they are in.

But there are several other paths that could take the Raiders to their ultimate destination if they should somehow come up short of that goal.

While five playoff spots are already clinched in the AFC, there are still two open spots and 130 seeding scenarios that could play out depending on the results of this weekend.

With so much chaos, Raiders fans who have to sit around all day Sunday waiting for the prime-time kickoff against the Chargers may have difficult decisions to make with regard to what games to watch and who to root for throughout the day.

Let’s try to make it easy.

Any scenario for the Raiders to get into the playoffs with a loss begins with the Jaguars beating the Colts in a 10 a.m. game.

Sure, the Colts are a massive 15-point favorite in the game and are likely to win.

But those needing a glimmer of hope can take solace in the fact the Jaguars have defeated Indianapolis six straight times in Jacksonville. The last Colts win was in 2014.

Should the Colts win the game and end that streak, they will be in the playoffs while Baltimore and Pittsburgh would officially be eliminated, along with the loser of the Raiders-Chargers game.

Which means you can just stop reading here.

But should the Jaguars win, things could get crazy.

The Pittsburgh-Baltimore game also kicks off at 10 a.m. with both teams harboring slim playoff hopes. The winner would remain alive, but still need help.

The Steelers would get in as long as the Chargers-Raiders game doesn’t end in a tie.

That has led to the wild speculation about the AFC West rivals mutually agreeing to play to a tie to make sure both teams make the playoffs should this unlikely scenario arrive.

Raiders’ interim coach Rich Bisaccia and Chargers coach Brandon Staley have dismissed the notion throughout the week, but Staley made some interesting comments on the matter Friday.

“That’s a very loaded scenario there,” he said. “There’s a lot there from a variable standpoint. It it’s all good conjecture and I think it’s worthy of consideration. I think we’ll just have to wait and see if that situation expresses itself, and then we will be forced to make a decision.”

Staley appeared to be referring to an overtime scenario where he may choose to go conservative and settle for a tie as opposed to a mutually agreed upon tie from the outset of the game.

If the Colts do win, the Chargers would be in and the Raiders out in the case of a tie.

A non-tie in the season finale would save everyone a lot of math.